Thus, we strongly recommend that y’all first read these profiles :

Reading the profile for Brute and Glob and the profiles for the Fury (Lyta Hall) is recommended for those who want to dig further into the material.

The spirit of Hector Hall know inhabits the body of Dr. Sanford, which has been reshaped to resembled Hector’s body when he was alive. Hall thus has the powers that Sanford acquired in the world of dreams, including flight and super-strength.

He also uses the distinctive equipment of the super-heroic Sandman, including the powerful cartridges of sleeping sand and the Hypnosonic Whistle.

Hall is assisted by Glob and Brute, and operates from the Dream Dome.

In short, he does exactly what Sanford used to do.

For a while, it seemed that Hector Hall’s short and unhappy life had become ideal.

His disembodied soul sliver was caught by Brute and Glob, the assistants of the super-heroic Sandman (Dr. Garrett Sanford). Sanford had recently died, but his body had been put in stasis. Glob and Brute magically breathed Hall’s soul into Sanford’s body. Then they reshaped it into Hector’s likeness.

We’re off to never-never land

For all intents and purposes, Hector Hall had been resurrected. He took over Sanford’s responsibilities as the guardian of dreams. 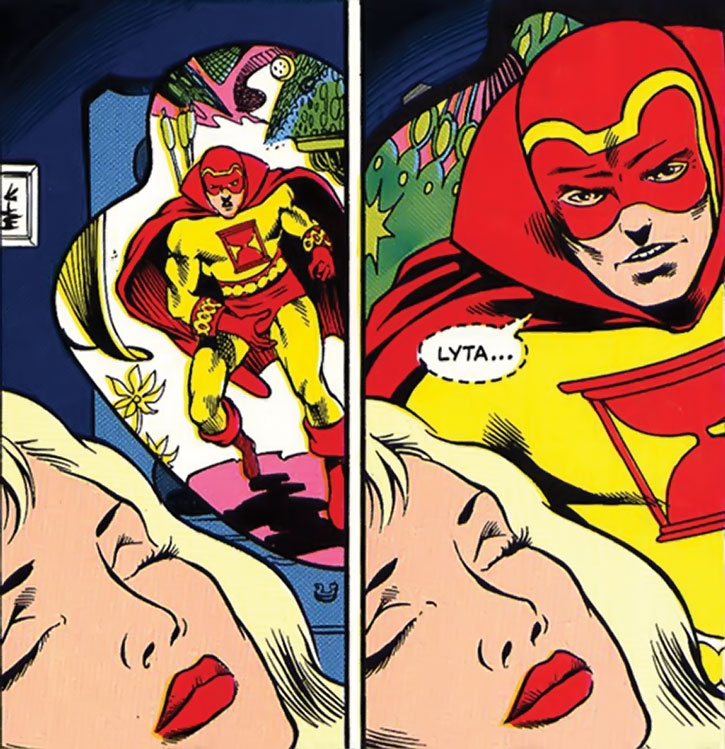 Hall hesitated to announce his reincarnation. One reason for this was that, much like Sanford during his latter years as Sandman, he could only return to the waking world for one hour at a time. At the same time, he couldn’t bear to stay away from Lyta.

Thus, he ended up habitually visiting at night to watch her sleep.

While Nuklon was visiting Lyta and her adoptive parents, the nightly intrusions were detected. Creeped out by the notion of some gold-and-red-clad weirdo spying on Lyta during her sleep, the vacationers made several attempts at trapping the Peeping Tom. Nuklon and Lyta eventually trapped the Sandman, discovering that he was Hector.

Tell him that his lonesome nights are over

With his friends now aware that he was back, Hector still had his responsibilities to manage. Yet he could help from time to time, albeit for no more than an hour. Thus, he soon came to the rescue of Infinity, Inc. who had been trapped as a result of a plot of the Wizard and the Lorelei.

The Sandman single-handedly rescued everyone and allowed Infinity, Inc. to return to Earth. Hector then used the last few minutes of the time he could spend in Earth that day to rush back to Lyta’s vacation home. He kissed her before he had to depart back into the “dream dimension”.

Soon after this case, Lyta (by then about four months pregnant) and Hector decided to marry. They had a big reception.

Two months later, Hector had finished developing a way for Lyta to join him in the ’dream dimension’ as a workaround to ignore the one-hour limit.

Please turn on your magic beam

Howbeit, the ’dream dimension’ had deleterious effects on human minds. Brute and Glob, who never mentioned these, had hoped that they wouldn’t affect the spirit of a dead person such as Hector. But that didn’t work.

Lyta became increasingly stuporous, living in a haze that slowly chipped away at his sanity. Her pregnancy stopped progressing for several years. As to Hector he became completely caught in his adventures as the Sandman. Yet these gradually stopped making any sense.

For instance Hector never really noticed that, despite supposedly being the guardian of children’s dreams all over the world, he only ever protected one boy. It was one Jed Paulsen, prone to strange nightmares.

The adventures of the Sandman, Jed Paulsen and — more rarely — the pregnant Lyta also evolved to resemble some of the classic adventures of Little Nemo in Slumberland, the turn-of-the-century Winsor McCay  comic strip.

As to Hector, while he behaved normally at first, he became increasingly weird. He now acted like a particularly dopey Silver Age  super-hero.

In the wake of adversity

It was all a deception. Glob and Brute were not the Sandman’s assistants, but its manipulators. They had been the architects of a fake dream reality build into the head of a little boy.

Hector and Lyta were increasingly insane. And Brute and Glob had long since completely wrecked the life of Jed Walker, the boy in whose mind the fake dream dimension existed. the damage had been done to build up psychic defences within his battered psyche. 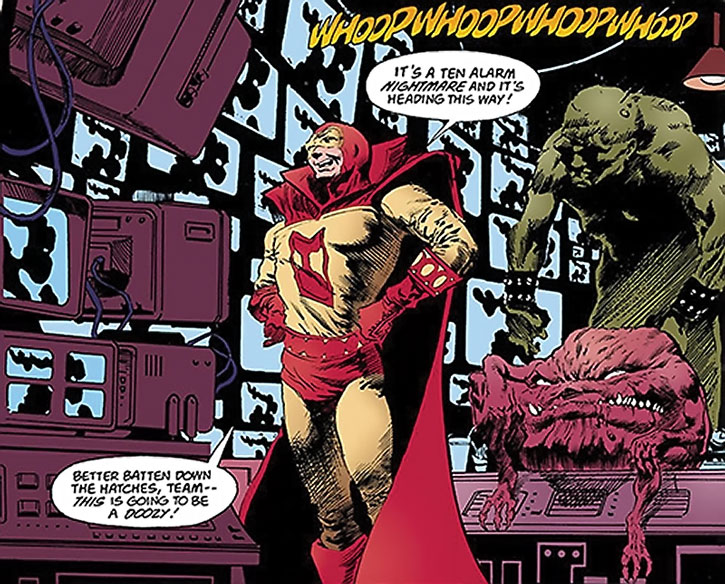 After two years, Glob and Brute’s plot was brought crashing down. Their master, Dream of the Endless, found them. Dream destroyed the fake “dream dimension” without hurting its unwitting host. He then sent Brute and Glob into the Darkness, and returned the shocked Lyta to Earth.

Seeing the presence of the dead Hector as an anomaly, he destroyed the ghost so it would pass on as per the natural cycle. Hector’s last words were to tell Lyta that he loved her.

Yet, curiously, this wasn’t the end of Hector Hall.

Originally, as the Sandman, he was the old Hector. But he increasingly became clownish and dissociated in his eagerness to be the guardian of dreams, friend to children everywhere, and having surreal and Slumberland-like adventures.

The quotes provide a good idea of the strangeness that was going on in the Dream Dome.

“Say, guys, do you think this nightmare monster’s going to be a tougher battle than the skeleton men from Pluto ? Do you ? Do you ?”

“It’s a ten-alarm nightmare and it’s heading this way ! Better batten down the hatches, team – this is going to be a doozy !”

“I am the Sandman, guardian of the dreams of men, protector against wicked nightmares, lord of the Dream Dome, and friend of children everywhere !”

Drawbacks:
Attack Vulnerability (-1CS OV/RV against Blindside attacks), Exile (Involuntary, from the wakeful world, though he can return for one hour per day), Mistrust (Cops in the Jed Paulsen world always try to arrest him).

Stats are speculative due the lack of material. We’ve assumed that Hall was identical to Sanford in terms of capabilities, even when not demonstrated. 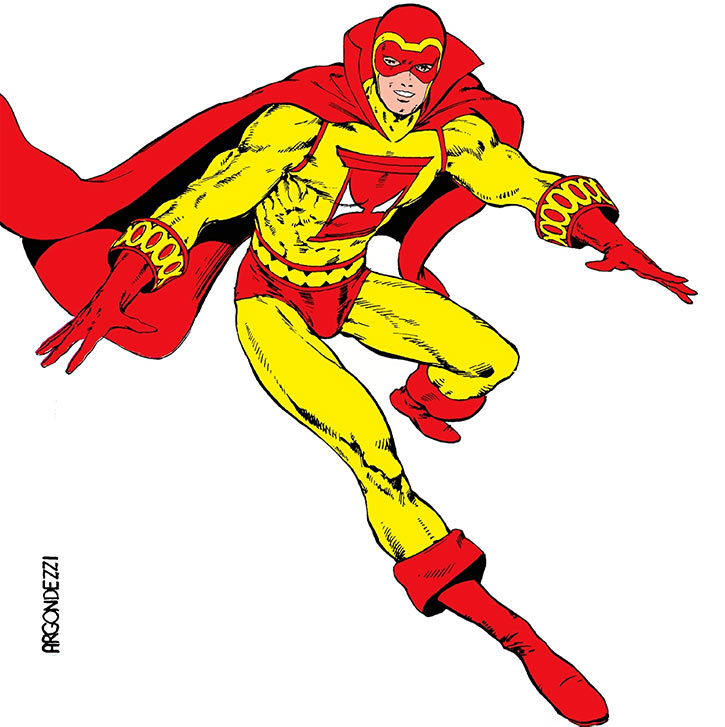 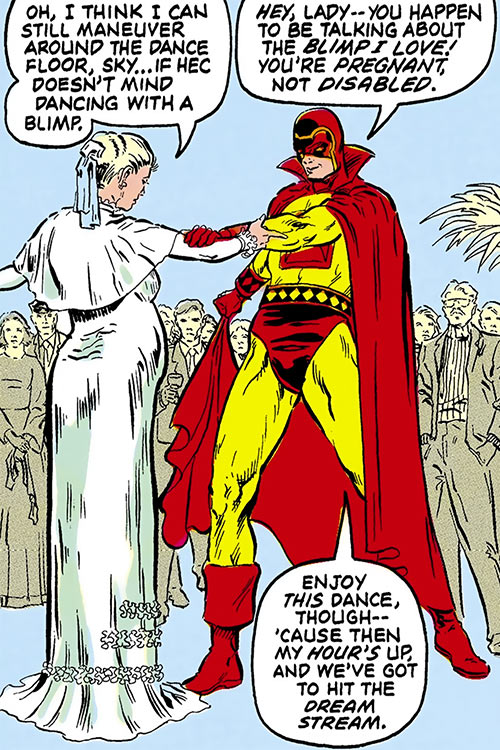 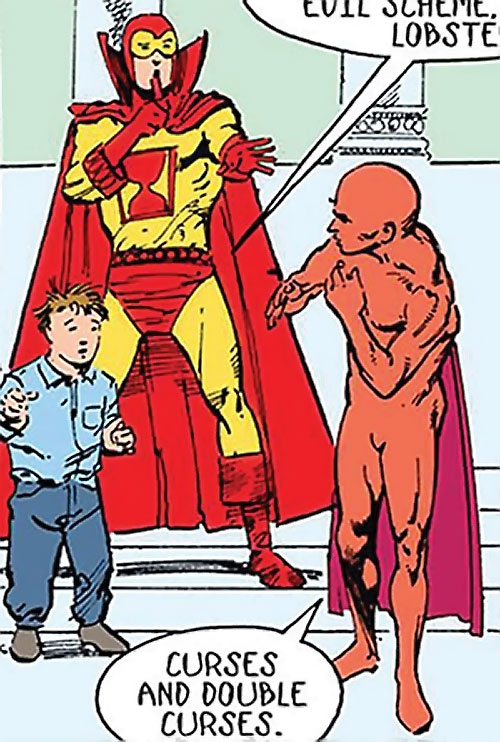 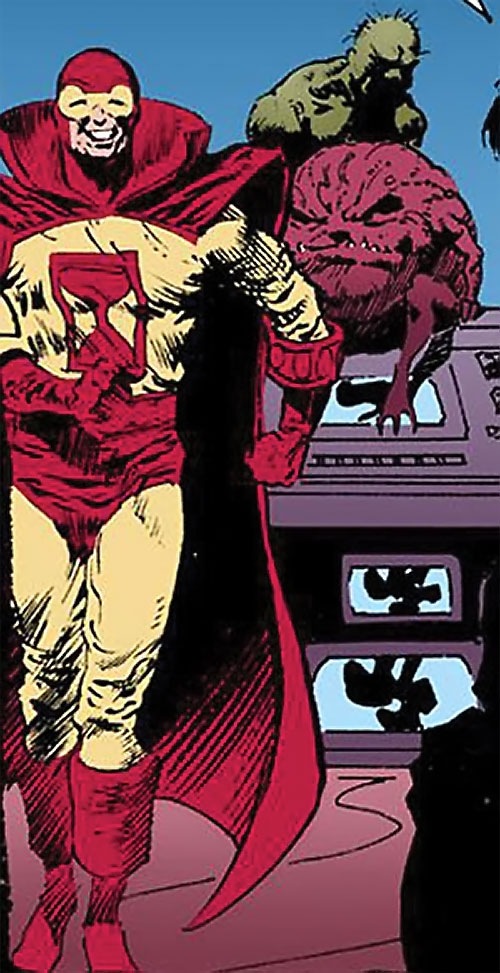