As the Sandman, Flint Marko is able to convert his entire body (or a portion thereof) into sand, though at times being composed of sand seems to be his normal state. If in contact with the ground, there seems to be no limit to the amount of sand Marko can add to his body, shape- and size-changing at will and projecting his sand in destructive blasts.

Sandman can also control the density of his sand-body, becoming rock-hard as well as loosely fluid, pouring into and out of small openings.

Sandman remains highly vulnerable to heat-, flame-, and water-based attacks. During his time with the Frightful Four, Sandman turned this into an asset. He wore a costume that allowed chemicals to mix with his sand for various effects, including a flame-retardant glue.

Flint Marko grew up poor and on the streets — the worst streets in the worst neighborhood in New York City. He was a career criminal early, in and out of prison a dozen times before he even got out of his teens. By the time he was 30 he was a brutal cop-killer who even made it to the FBI’s “Ten Most Wanted” list.

Deciding the USA had become too hot he left the States and after a year he found himself in French Polynesia. Eventually running out of money he returned to crime, robbing a bank. Captured while escaping the bank he was put on trial and sentenced to 15 years of hard labor on a small penal island called “The Island where the Dead go to die.”

A year into his stay he met another American prisoner named William Baker. So alike in appearance the guards thought it would be funny to chain Marko and ’Big‘ Bill Baker together.

For the next 6 months Marko and Baker spent joined at the ankles. In this time Marko learned much of Baker, including Baker’s history with his “sweet little gray-haired ol‘ mother”.

Shortly after the 6 month mark Baker developed a cough and three days later he died. The shackles that bound the two together had rusted shut, so Marko was also taken with the corpse to the infirmary. 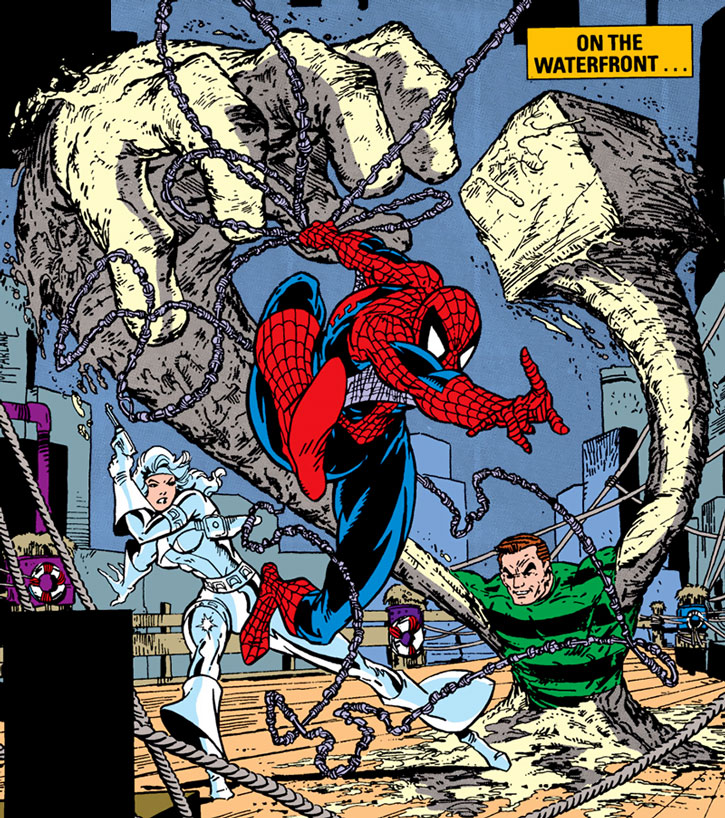 Through a combination of coercion and promised bribery Marko convinced the prison doctor to put Marko in the burial sack instead of the dead Baker. In the sack Marko was taken 25 miles out to sea and dumped overboard. With a scalpel stolen from the infirmary he cut himself out of the sack and spent 12 hours swimming until he reached land.

Unfortunately the island he washed ashore on was used for nuclear testing. Marko was caught in a nuclear detonation. But instead of atomizing him it mixed his body’s molecules with the beach, becoming a living, walking Sandman.

Days later he incapacitated the French inspection crew that were investigating the site and stole their boat and headed back to civilization. He laid low in Madripoor using the alias William Baker.

Eventually, he was approached by his ’cousin’ (they share the same great-grandmother) Norman Osborn to kill Spider-Man. Sandman agreed, impressed as he was by his “cousin’s” reputation as a cold-blooded killer.

Sandman continued his life of crime. He often fought Spider-Man as well as teaming up with various villains, such as the Frightful Four. During an ill-fated team up with Hydro-man, the two villains merged into a mindless mud creature, although they soon recovered. 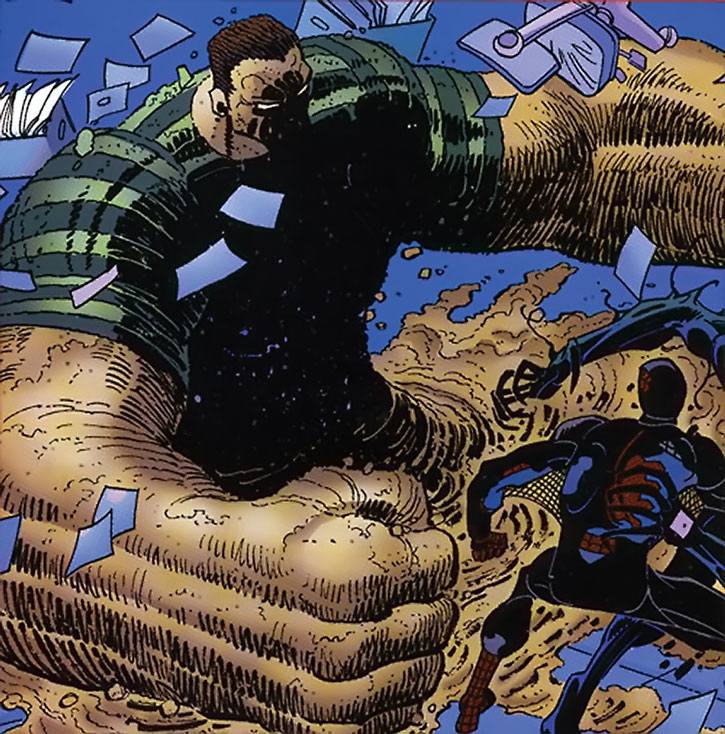 Sandman was seemingly shaken by the experience. As a result, an discussion with the Thing convinced to give up his criminal career. Sandman fought hard to clear his name.

One of the heroes to first give him a chance was the mercenary Silver Sable. She allowed Sandman join her short-term super team, the Outlaws, as well as to become a valued member of her Wild Pack. Sandman even seemed to have developed an unrequited crush on Sable.

We could be heroes

At one point, Sandman even accepted an offer to become an Avenger. He participated to a couple of missions only leave, not feeling accepted in their number.

More recently, Sandman, on orders from Silver Sable, helped Spider-Man return home from Europe while teaming up on a mission. The two seemed to have come to terms with their history, and remained allies.

However, a more recent plot twist revealed that Flint Marko becoming a good guy was actually a plot engineered by the Wizard, using a mind control machine. Eventually the Wizard de-programmed the Sandman to make him a murderous bad guy again.

See peekchurs. I wonder how many of those T-shirt and pants he has… The green costume is his Frightful Four costume.

Originally Sandman was a rough blue-collar type, really. Not a killer, just a brawler. Not malicious, just a bit of a bully. And certainly not a mastermind. Although he’s very powerful, it was OK for him to just act as metahuman old-fashioned street muscle for more ambitious, aggressive villains. 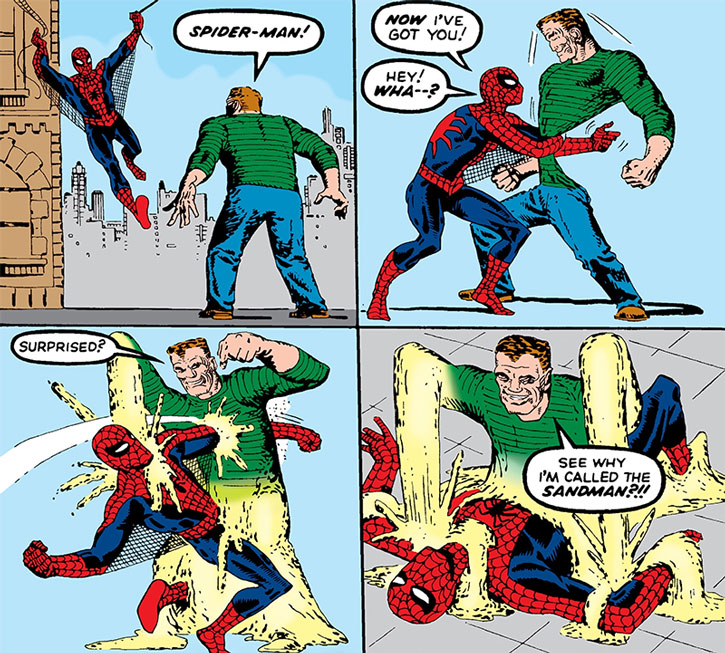 The merge with Hydro-Man seriously shook him, and he realized his life was going nowhere. Given that he is unsophisticated barfly, many opponents tend to underestimate his very real savvy and experience. *This* Sandman has the “Mercenary” motivation.

The recent retcon of Baker always having been a murderer changes the Sandman, of course. He’s now much more the brutal criminal and street killer.

Perhaps he was bitten by the radioactive Sand Superman ? :-)

More seriously, the accident that transformed him into Sandman would almost certainly be related to the experiment that turned Sandy Hawkins into the Sand Creature he spent so many years as.

Drawbacks:
Public ID, Attack Vulnerability (flames/heat, -2CS), MIH (previously MIA) toward Silver Sable, Misc.: If he collides with a creature made of animated water, he will probably merge with it as a nonsentient mud creature (5 pts). 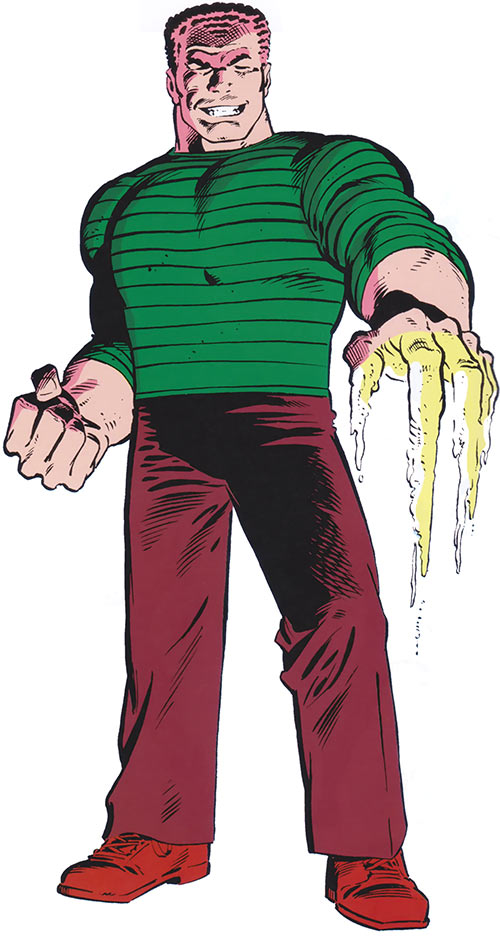 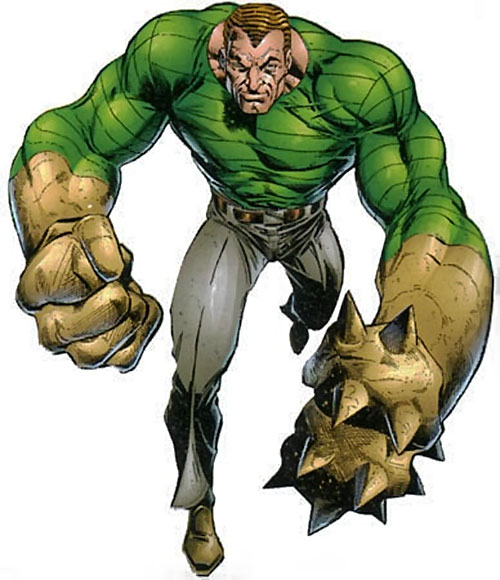 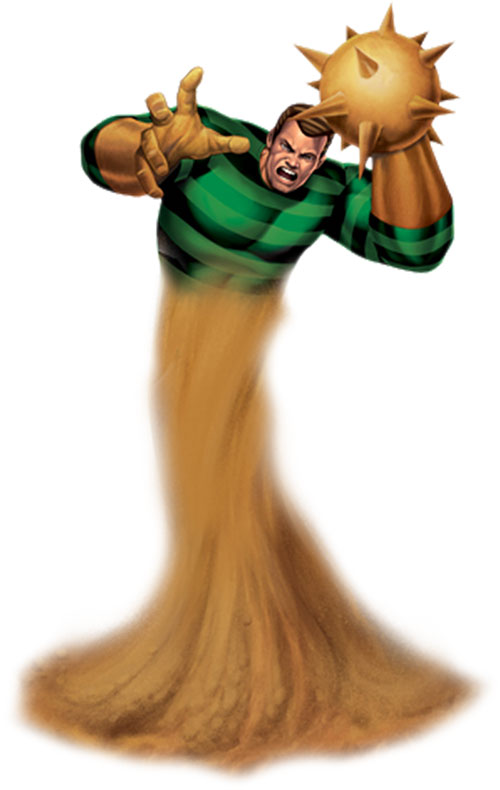 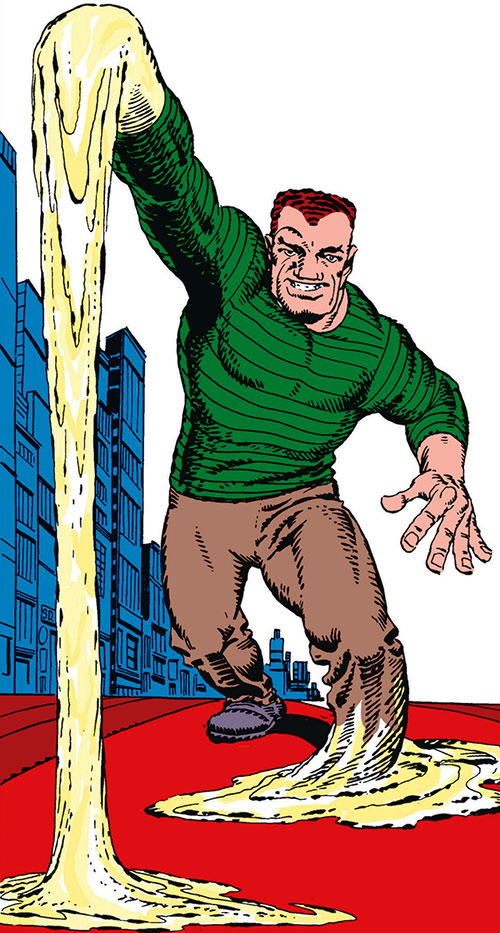 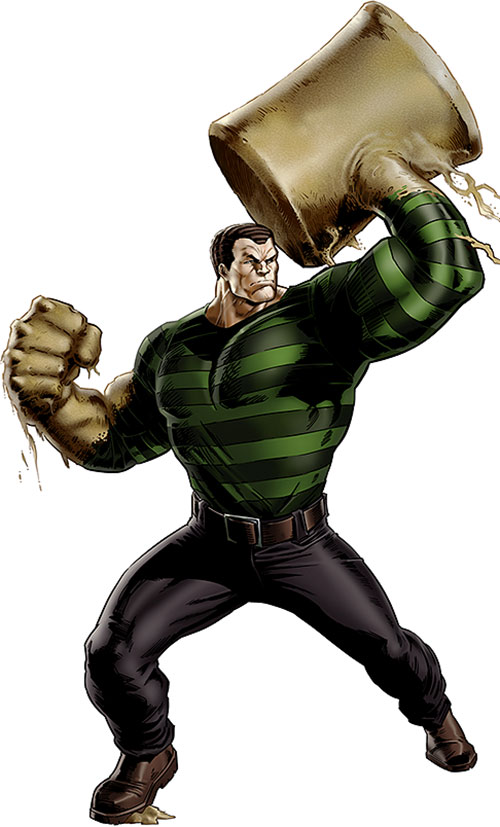 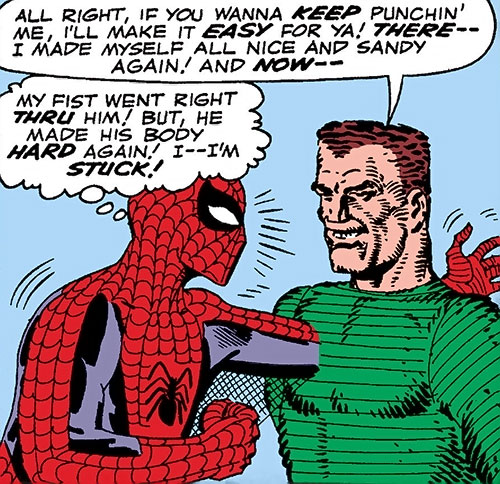 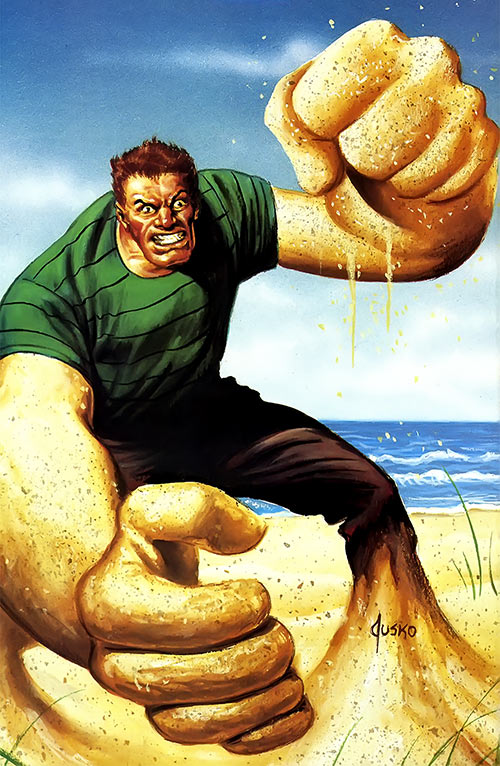