Silke can alter her basic bodily form to that of any human or near-human form.

In addition, she can use her ability to heal even fatal wounds, resist the effects of poisons or gases, or to transform her arms into simple blades.

Sandra Silke was a highly qualified Secret Service agent. From there she was selected to take part in a special genetics research project within the government.

Silke proved to be their second major success, possessing uncanny transformative powers while still retaining a stable base state. Unfortunately, several of the top men in the project were corrupt. These were willing to use their guinea pigs for their own purposes.

When her psychiatrist at the project, Jason, goes missing, Silke knows something’s up. When she confronts the higher ups, soldiers attack and try to kill her. Their bullets nearly kill her, but she repairs the damage almost instantly as she strikes down the guards. She escapes the project, and heads in to the nearby city.

She nearly kills Jason when he breaks in to her hotel room. But after bandaging him up, he explains that the corrupt division chief has a sample of her blood and plan to use it to create an army of super-soldiers. Silke and Jason go and find the previous escapee (and other fully successful project), Gina Matthews.

Gina is reluctant to help them break in, in anyway. But when she learns that her lover Noel Simms (one of the corrupt higher-ups) is sleeping around, she bashes him over the head and brings Silke a blood sample. With the sample, Silke takes Simms form, and breaks in to the lab.

Silke breaks in to the lab’s climate control room. She finds a duplicate of the President among others. Then she releases one cryogenically frozen specimen, another agent named Duffy. She leaves Duffy to thaw as she retrieves the specimens. She starts a fire and then escapes.

Silke gets captured, but only for a few hours. She escapes, only to run in to the monstrous new form of Duffy.

The building’s self-destruct device is activated, and she battles Duffy as she races through the building in an attempt to stop her enemies. She shoots down Simms and the other corrupt project heads in their helicopter, which breaks down in to a fiery inferno. In the ensuing chaos, she takes on the monstrous Duffy mano y mano, ultimately defeating him.

Silke vanished after the incident for an undisclosed period of time, before returning to work, either for the CIA or Secret Service (the true source is unclear).

She infiltrated the ultra-elite F5 team as “master of disguise” Abraham Silke. It was part of an attempt to discover the team’s corrupt member. She eventually unearths a web of conspiracy and lies. In the aftermath, over half the F5 team is dead and the organization is in shambles.

Silke left the F5 team questioning her identity after capturing the corrupt team members. Her activities since that time remain unknown.

A somewhat thin, attractive woman. She’s got full lips and a mop of bluish black hair that always seems to be slightly mussed. She has naturally blue eyes, and is finely muscular.

As Abraham Silke, she was somewhat larger, with a large, slightly pointed bald head.

Silke is a “take no prisoners” type of lady. She does what she needs to do to get the job done, and may God protect anyone who gets in her way. She has a disdain for most agencies outside of the Secret Service and the CIA, as can be seen in her conversations with F5 members.

Silke projects a very Lara Croft-like vibe: a strong, independent woman who’s as tough as nails and a no-nonsense attitude.

(After eliminating her foe, a more powerful shape-shifter) “Don’t take it personal… it’s just my job.”

Silke could be fairly easily inserted in to the DC Universe, working for a variety of government agencies, whether real or fictional. She could even work with the Suicide Squad on any stealth oriented missions.

Bonuses and Limitations:
With a sample of DNA, Silke can duplicate another individual down to the cellular level.

Drawbacks:
Secret Identity (her powers are a state secret). 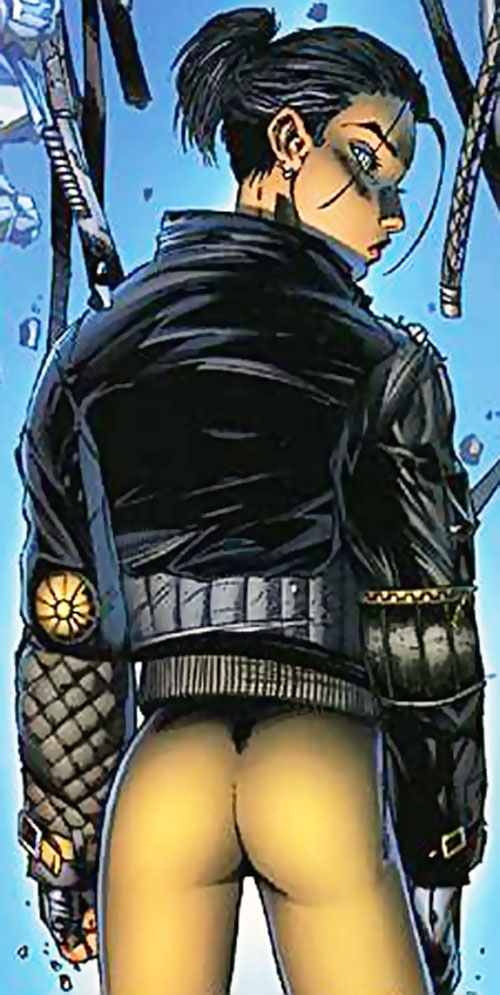