Verdugo is a deadly and resourceful Special Forces officer, mercenary and assassin. She has been very successful, is smart and calculating, and has a very wide répertoire of skills.

Verdugo’s clonal body can recover from even fatal injury within a short amount of time. If she has suffered a lot of damage, she will look like a mangled zombie and will need to drain the blood of others so her body can reconstruct itself. This is usually done by killing and eating animals, or improvising a transfusion from people.

She can also transfuse her blood into others, allowing them to heal from even fatal wounds or diseases. But too much of that will leave her in a corpse-like state. This is because she has to transfer the damage and/or disease to her own body by having another transfusion going the other way.

Pratt has implied that clonal bodies had a limited life cycle, and that their ability to recover would slowly break down.

Sandra Verdugo is a former Special Forces operative — one of the small number of female soldiers in US elite corps in the Marvel Universe. Her work was likely mostly done on CIA orders, as an assassin. Eventually, she left the military and became a soldier of fortune, working for anyone who could pay her high fees. Verdugo soon acquired a solid reputation as an invaluable killer.

A dozen years ago, she was in Argentina. There she romanced and had sex with psychiatrist Dr. Leonard Samson before dumping him without any explanation. That encounter left her pregnant.

After giving birth, Verdugo retired and lived in seclusion with her son Ricky for eight years. However, a ruthless American intelligence agencies codenamed “Home Base” decided that they needed her invaluable services, and that they would not take “no” for an answer.

They kidnapped Ricky, faked his death and framed her for the murder. She was arrested, placed on death row, and executed in record time.

Before being executed, she was offered a deal by a Home Base agent. If she would work for them after her death, her son would be spared. Anxious to protect Ricky, she agreed. Ricky was later used by Home Base, as “Ricky Myers”, in a fake video showing the Hulk accidentally collapsing a building on him and killing him.

Agent of Home Base

Home Base agent intercepted Verdugo’s corpse as it was transfered away from the prison’s morgue. They cloned it, made a copy of Verdugo’s consciousness from the corpse, rewrote her consciousness into the clone, and made the clone superhumanly durable. This technology is reminiscent of the one developed by Dr. Miles Warren to create Carrion.

Verdugo was later paired with another mercenary working for Home Base, the psychopathic Jink Slater, over his objections. They were tasked with capturing the Hulk so Home Base could turn the green titan into a weapon. The intervention of Doc Samson foiled their first attempt, and Slater shot Verdugo in the forehead out of frustration.

Verdugo recovered rapidly, stole the laptop Samson was using to communicate with Banner, and tracked Banner down before Slater could. She allied with Banner, as she knew that the only thing keeping her son alive was that they needed her to get the Hulk.

After verdugo explained the situation to Banner, they were reached by Slater. Verdugo manipulated Slater into shooting her to make Banner angry enough. As Banner started changing she detonated the 20 pounds of plastique hidden in the basement. As planned both the Hulk and Verdugo survived, and Slater was apparently killed.

Verdugo eventually located Banner, but he was hit by a car before Verdugo could contact him.

Banner was rescued by the car driver, who took him to her place since she was avoiding the police. The driver left to borrow money and Banner, who was suffering from severe internal haemorrhaging, fell into a coma.

Still determined to save him, Verdugo sneaked in. She transfused her blood into Banner for several days and nights, saving the infamous scientist. During that time she prepared fake IDs making them brother and sister. By the end of the treatment, Sandra was a (barely) walking corpse.

When the police came in to evict the occupants due to the unpaid rent, they found Verdugo’s desiccated corpse and the pair of forged papers. They assumed that the corpse was the tenant’s, and arrested Banner as “Mr. Copeland” for the murder of his “sister”.

Verdugo recovered in time, partially drained a morgue assistant, and walked away. She then narrowly saved Banner from a Home Base agent, Pratt, who had enhancements similar to hers.

The psychopathic Pratt came back. He struck at Verdugo’s sole weakness by having a robot version of Ricky built, to serve as a fake hostage. He thus forced Verdugo to stop helping Banner and side with him.

However, Sandra silently realized her “son” was a robot when she hugged him. The insane Pratt ordered her to strip naked and “killed” her “son”, but the Hulk then destroyed Pratt.

Verdugo buried the Ricky robot. Then she and Banner split ways again, both still looking for the real Ricky. But despite their talents, they did not manage to defeat the secrecy and security surrounding home base.

Eventually, the special laptop Verdugo was using to communicate with Banner stopped working. She went to her former lover, Doc Samson, to repair it. She then told him that he was Ricky’s father, gaining his instant cooperation.

Samson determined that the laptop wasn’t broken, but had in fact been hacked by Home Base. This allowed them to run surveillance on Verdugo and indirectly on Banner. Using his technology, Samson remotely located Ricky in Carlsbad. However, as they were driving there, Samson and Verdugo were intercepted by a Home Base helicopter, whose fire destroyed their car and killed Sandra.

Verdugo killed the crew in return, and Samson commandeered the helicopter. They managed to save the Hulk, Nadia Blonsky and Betty Ross from an army of Home Base artificial rats.

However, the Hulk was at that point but a beast due to previous ordeals. Verdugo started calming him using his private meditation technique, but was accidentally interrupted by the other two women. As a result the Hulk angrily departed, chasing one of the artificial rats that had bitten him.

Samson, Verdugo, Blonsky and Ross only narrowly survived the remainder of rats, thanks to Samson’s ingenuity. Meanwhile the Hulk, having chased the rat back to its point of origin, was ravaging the Home Base headquarters.

The Hulk blood inside the android rat’s special fangs was apparently of such value to the Home Base leader that he was willing to have everyone on site killed by the Hulk so he could get the blood.

Investigating the gutted Home Base heaquarters, Sandra found a room with several more clone bodies of hers. She then reached what seemed to have been the real Ricky.

However, less than a minute after that the base was destroyed in a nuclear explosion. Neither Sandra Verdugo nor her son have been seen since.

Verdugo usually dresses in a somewhat sexy way. She’ll even go for trashy if she intends to distract someone or otherwise play with his attention. She’s quite shapely and attractive, unless she has suffered major tissue damage recently and is still recovering.

Verdugo is smart, extremely competent, very dangerous and slightly deranged. She’s cool, collected and deadly. Her numerous skills and areas of expertise allow her to deploy all sorts of clever plans to make her hits. She’s a highly professional and resourceful assassin, spy and commando.

From time to time she behaves oddly, as if everything was but a game and she was just lounging around to get some cheap thrills, sex and titillation. This may be her way to deal with the incredible stress of her job. Playing sex kitten might be a way to compensate for her unique occupation and condition, which prevents her from having a normal life.

Verdugo loses her Iron Nerves when her son is threatened, and can get extremely anxious when protecting him. She was obsessed with finding and saving him. She’s also quite motherly toward young boys in general.

Slater: “You occasionally wear something other than a towel ?”
Verdugo: “Done some of my best work in a towel.”

“I know everything about you. That’s an assassin’s job.”

Samson: “Yeah. I know about your trial, Sandra. And just how did you fake your execution ?”
Verdugo: “Who said I faked it ?”

Banner: “So… you’re not actually undead — just a vampire… Golly, that’s a relief !”
Verdugo: “All of us chicks are vampires, chico — haven’t you heard ?” 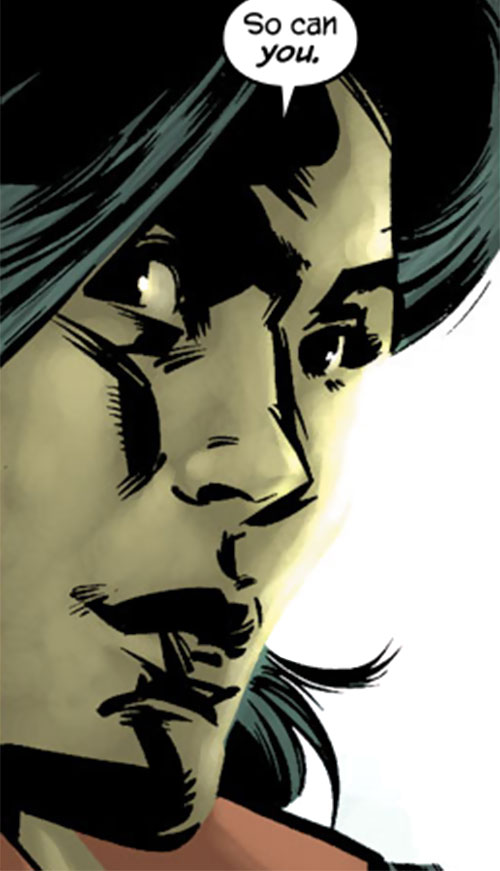 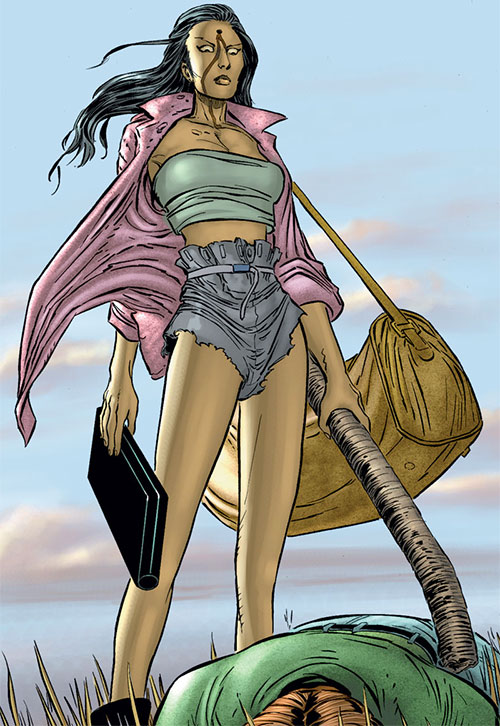 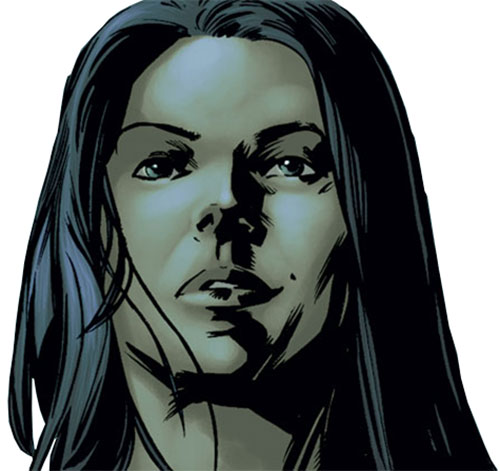 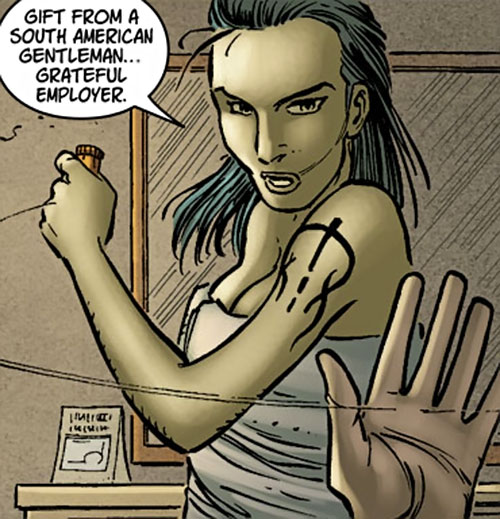