Throughout the earliest part of his career, Sandy Hawkins was the protégé of the Golden Age Sandman. As such, his skills were centered around Asian martial arts and criminology skills learned from the elder hero.

After being exposed to the silicon radiation, Sand’s body was altered in ways yet to be fully determined. He possessed the ability to alter forms from human to silicon, could move through earth-based objects, and could absorb and release seismic energy and travel along fault-lines.

In his later career as Sand, he used the Sandman’s gear, then acquired new powers.

The origins of the kid hero originally known as Sandy the Golden Boy are shrouded in mystery and confusion. In the earliest records, he was a New England teen who imitated Sandman’s early gold and violet uniform.

On a road trip in 1942, Wes Dodds encountered a giant bee, the product of a local apiarist, Elijah Buttsford. Buttsford had generated a mix of thyroid extract and pollen that caused the bees to grow to enormous size, risking havoc as the territorial animals began to build an enormous hive.

Bess Buttsford, daughter of Elijah and friend to Sandy, led the two costumed figured to her father’s workshop. She explained that the bees had taken her father. Quickly tracking them, the pair rescued Buttsford. Then they sealed the hive, flooding with carbon dioxide gas and killing the bees.

However, this tale may be apocryphal since the youth in this story is referred to as Sandy McGann. Another story, certainly apocryphal, places Sandy as a costumed identity in 1939, the partner of Jack Dodds. It seems that the true origins of Sandy the Golden Boy are yet to be revealed.

Boy in the yellow costume

What is known is that, by some means, orphan Sanderson Hawkins, nephew of Dian Belmont was introduced to the Golden Age Sandman, Wesley Dodds. After helping the hero out on a case, the two took up a life of adventuring together in which Sandman taught the younger hero his methods of crime fighting.

Most of the case work involved cleaning up New York’s mob elements. Yet Sandy occasionally participated in national level case work with the Young All-Stars or as a member of the All-Star Squadron. He periodically joined the JSA on casework such as helping the non-magic powered heroes deliver rations to occupied Europe in 1942 or opposing the agents of the Stalker in 1945.

It’s likely that Sandy was protected from the more gruesome work the Sandman took upon himself. Sandy the Golden Boy remained active for most of Sandman’s career until late in 1945.

As part of his battle against crime, the Golden Age Sandman had developed an arsenal of chemical weapons. It ranged from sedatives to noxious gases. In 1945, he developed a prototype weapon based on silicon, the exact nature of which is unknown. In the first activated test of the weapon, it exploded, exposing Sandy Hawkins to an unknown kind of radiation.

Within moments, Sandy was altered into a giant crystalloid monster, raging and angry. But the creature that was Sandy was unsteady. When it collapsed momentarily after forming, Wes Dodds sedated it. For decades thereafter, Sandy Hawkins was kept in a special chamber in an unconscious state as Dodd’s feared unleashing the unknown creature on the world.

Decades later, a lapse in the system interrupted the anesthetic gas into Sandy’s “velvet cage” and the Sandy revived. Sensing a shift in the tectonics of New York City, the mute Sandy went on what seemed to be a rampage toward the epicenter.

Dogged by the combined Justice League and Justice Society, Sandy was finally cornered and subdued. After recovering his voice, he explained that his rampage had been solely a function of his inability to speak. He was actually trying to contain the forces of the shifting fault lines.

Confronting Dodds after years of silence, Sandy revealed that initial irrational rage, he had contained himself. He was actually quite normal but was unable to communicate such due to the anesthetic effects of Dodds’ chamber.

Crushed with shame, Dodds and Sandy parted company. Dodds sought psychiatric redress for the weight of his actions, Sandy entered a series of experimental programs funded by Dodds to reverse his condition.

Years later, Sandy was taken prisoner by Dr. Arnold Price. He was a physician/scientist who had been studying Hawkins. Now known as the Shatterer, Price planned to harness the geo-sensitive powers of Sandy’s body to unleash rather than absorb seismic energy. By initiating a series of earthquakes, the Shatterer could then blackmail the city and avenge himself on his colleagues.

The Shatterer’s plans were derailed by the return of the newly active Golden Age Sandman. Stunning the villain, the Sandman freed his former partner and rigged a quick experiment.

Reasoning that, if a silicon explosion had turned him silicon, a organic explosion would turned him back, Dodds’ set off an explosion of organic reagents. When the dust cleared, Sandy Hawkins emerged, seemingly normal.

Regaining his senses, the Shatterer attacked. However, a tremor caused by Sand’s “residual” seismic energy opened the earth beneath the villain and consumed him.

As the Sandman and Sandy pondered their potential new role in life, the JSA and several closely allied heroes were summoned. They were to save the Earth from impending Ragnarok by containing destructive energies of ancient Norse mythologies in a different realm. These forces were held in check by the JSA for years, ending only when the JSA were replaced by low-tech aliens.

Returned to earth, Wes Dodds reunited with his common-law wife and retired. Sandy Hawkins set about educating himself, traveling the world and pondering the next stage of his life.

Sweet dreams are made of this

In 1999, Sanderson Hawkins was again thrust on the stage by the advent of the Dark Lord, Mordru. In pursuit of the child destined to become the new Dr. Fate, Mordru was thwarted by the aging Wes Dodds, now a widower as Dian had died of cancer some months earlier. Confronting the aging hero, Mordru was thwarted once more as Dodds chose suicide, denying the Dark Lord the secrets he craved.

As Dodds died, the dreams that plagued him and the considerable wealth at his command was passed on to Hawkins – whose further adventures should be covered in a Sand writeup.

Compiled by Sébastien Andrivet (stats from World at War, history by David Stepp on http://my.execpc.com/~icicle/SAND.html (defunct). 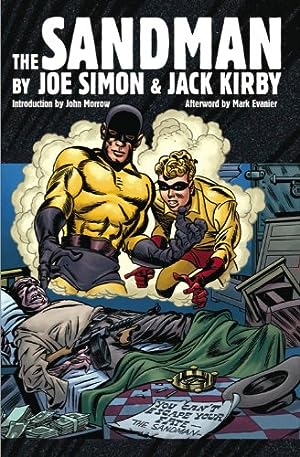 Collected Sandman by Kirby and Simon 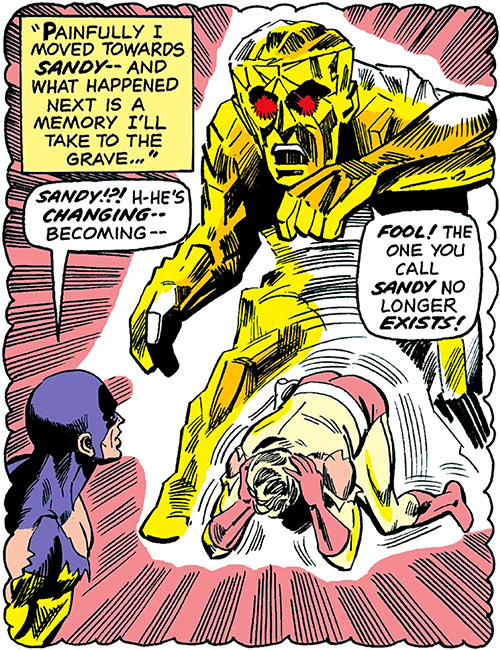