Sapper and Golden-Blade were an enigmatic pair who fought Ms. Marvel (Carol Danvers) that one time in 1978.

They unexpectedly returned in a 1999/2000 Iron Man story arc, where their nature and origin were finally explained.

Sapper appears to be a full-conversion cyborg. No bit of his original body is left visible. He :

The tentacles can efficiently absorb energy from whatever they are grabbing. Furthermore, the armour is also capable of absorbing ambient energy. For instance, this works if he’s plunged into fire and explosions. All drained energy is stored in batteries inside the armour, which Sapper can use to power his own systems if needed.

It’s not entirely clear what Sapper can absorb and how it works. He once managed to stun and batter down Ms. Marvel (Carol Danvers), but he couldn’t get traction against an Iron Man armour circa 2000.

When draining a nuclear reactor, Sapper was turning the reaction mass into inert matter.

When he’s charged up, Sapper can emit quite potent energy blasts from his hands. The greater his charge, the greater his power reserve is.

DC Heroes RPG Gamemasters  who want some rough ideas of his reserve can use the APs of overflow beyond his Power Reserves as an indicator. E.g. one AP beyond the cap of his Power Reserve means that he can fire two 12 APs blasts, two extra APs mean four blasts, and so on. Most GMs probably will not want to bother with the extra bookkeeping, though.

Sapper’s goal is not to burn through acquired energy reserves but to take them back to the ship. Howbeit, he has a bit of a temper and will likely end up blasting opponents when he’s charged up.

Both Sapper and Golden-Blade generally keep their Hero Points  for LDD, and seldom if ever use them to enhance AV. If Sapper ends up in position to deliver a solid Vampirism attack (say, a Blindside attack, or exploiting a breach in the target’s defenses opened by Golden-Blade) he will expend HPs on his OV, though.

Sapper is a space alien, from the Rajak species. The space menace Ultimo reportedly razed the Rajak homeworld, slaying pretty much the whole species. Sapper himself and his clan of traders were off-planet at that point in their merchant spaceship. 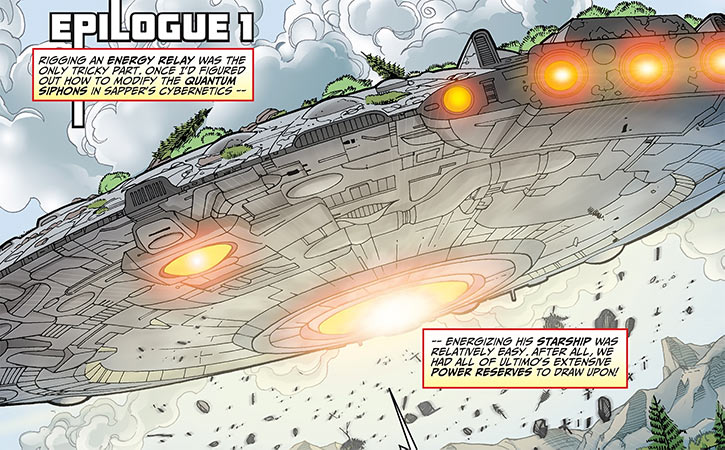 Sapper’s clan decided to avenge their civilisation by tracking Ultimo down and destroying it. Presumably, they had a weapon which they thought could be more effective against the giant robot than the planetary defenses of Rajak had been.

The Rajaks engaged Ultimo near Earth – circa 1840 by the local Gregorian calendar. Both sides took enough damage to force uncontrolled planetfall. Ultimo landed in China. There he would lay buried and inactive for decades until the Mandarin found, repaired and modified him.

The Rajak ship crashed into what would become the state of Washington in North America. All hands aboard were killed save for Sapper, an armoured cyborg.

A British fur trapper in the area was also nearly killed, but Sapper rebuilt him as a “mechanoid”. The trapper, grateful that Sapper had saved his life, became his close ally as Golden-Blade.

Rajaks are vaguely goblinoid humanoids with blue-green skin. Though they prefer to dress in heroic-fantasy raider garb (complete with horned helmets, of course – because they’re raiders, you see) they pack energy weapons, fly spaceships and have access to weapons of planetary destruction.

They may not have developed the advanced technology themselves. They did not seem to fully understand it. 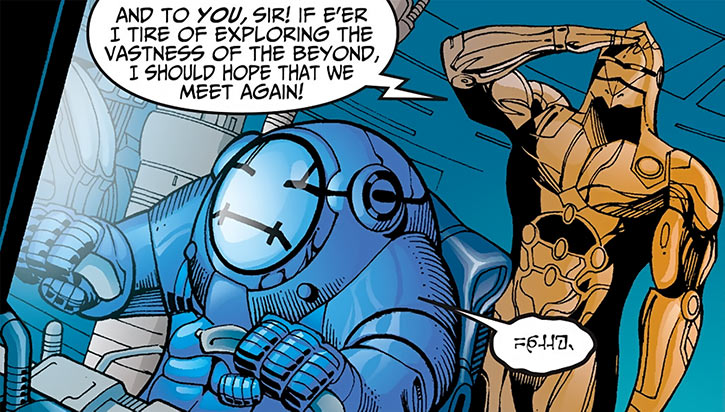 Rajaks were originally presented as space pirates. One small crew (four Rajaks flying three spaceships) was apparently in the business of pillaging entire planets for mineral resources such as uranium. Their modus operandi was to set up their delta-ray cannon on a nearby planetoid, fire it at their target to eliminate all life there, and plunder at their leisure.

Secondary sources  indicate that Rajaks were a confederacy of space pirates. But primary sources prior to Sapper’s appearance have been limited to four individuals. While it is traditional  for comic book space aliens to all have the same mindset and occupation, this is not a very high standard of proof.

Sapper’s claims contradict the secondary sources, though of course he could be lying through his teeth. He said that his ship was a merchant ship, and that all Rajaks were killed on the homeworld by Ultimo. Which doesn’t seem compatible with being a race of marauding space pirates.

If all Rajaks were indeed killed by Ultimo, the truth may never be known.

The ship’s crash had created a lake, which hid the ship itself. Sapper and Golden-Blade needed considerable resources to attempt to repair the enormous ship.

Their next move would be to construct numerous cybernetic bodies, to host the back-ups of Sapper’s clan’s consciousnesses and thus “resurrect” them. That one required huge resources.

Earth’s low tech level made this endeavour very slow. However, the broader availability of nuclear power plants in the 1970s and onward accelerated things. Sapper and Golden-Blade began raiding Earth installations to steal power. Sapper would store it in his batteries, then dump it into his ship’s batteries.

Sapper and Golden-Blade apparently once defeated Kree agents. Perhaps they attacked a scouting party or some such to take their small spaceship for parts.

In 1977, Sapper and Golden-Blade attacked the USS Halsey, a nuclear submarine visiting the Boston Harbour. They drained her reactor. The nearby Ms. Marvel (Carol Danvers) forced them to retreat after she unwittingly destroyed Golden-Blade’s robotic hand.

Sapper and Golden-Blade were not seen again for three decades. But they continued their raids off-panel.

In 1999, the pair attacked another US nuclear submarine, the USS Simon Savage (named after the Leatherneck Raiders’ leader during World War II). They again ran into Carol Danvers — now called Warbird — plus Iron Man (Tony Stark).

The drunk Warbird wrecked part of Sapper’s energy containment devices. An enormous explosion separated the combatants, and Sapper and Golden-Blade fled from the scene.

Some months later, the duo ran into Iron Man again as they attempted to steal energy from the SS Joseph Gillis, a Stark-Fujikawa floating energy research station. They were handily defeated and imprisoned on the premises.

As it turned out, the Gillis had been built on the seemingly inert Ultimo. Inevitably, Ultimo reactivated and destroyed the ship. After some confusion as to the role of the two cyborgs, their rescue of the crew cleared them of wrongdoing.

Ultimo had scanned Sapper to locate the wrecked Rajak spaceship. The giant robot headed there to destroy it – which would mean razing a large chunk of Spokane.

Attempts by the Air National Guard (and later S.H.I.E.L.D. fighter-bombers) to slow down Ultimo were only partially successful. But with Warbird’s support, Iron Man hacked Ultimo and forced a shutdown as the titanic war machine entered Spokane’s exurbs.

Authorities wanted to seize and study the Rajaki spaceship. However, Iron Man disagreed,as Sapper and Golden-Blade had been instrumental in saving Spokane. He helped them drain enough power from the inert Ultimo to take off.

Sapper and Golden-Blade left for outer space to resume their quest to resurrect Sapper’s clan in cyborg bodies.

Both Golden-Blade and Sapper’s appearance keeps evolving. This is because Sapper improves and adapts the designs based on what resources they can acquire.

With his metallic tentacles deployed, Sapper ambles much like Dr. Octopus. He uses some tentacles as very long ‘legs’ to dominate the field, and others as manipulative appendages.

Sapper has nothing too Rajak-looking about him, given how heavily cyborged-up he is. He may have been more identifiable as a Rajak before the crash.

He seemed to be generally benign, aggressive in combat, and unwilling to let his vendetta against Ultimo result in massive carnage even if that imperilled his plans.

Since they have so few appearances, the stats for Sapper and Golden-Blade are clearly on the speculative side. 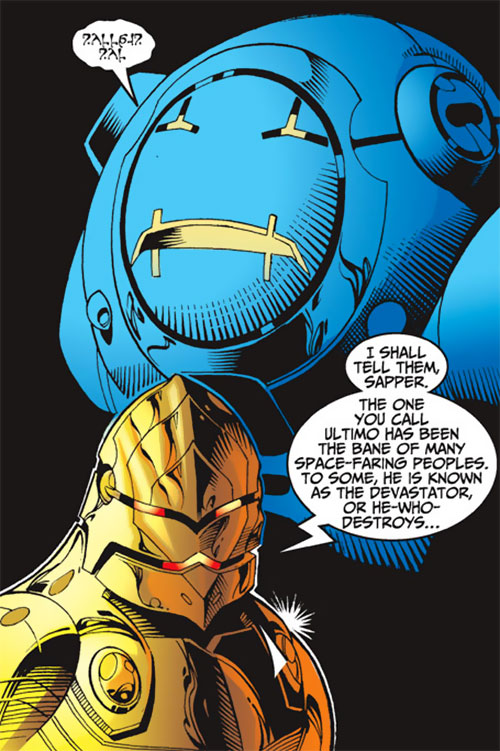 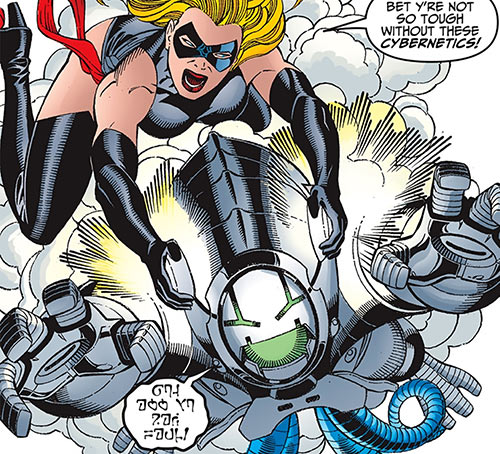 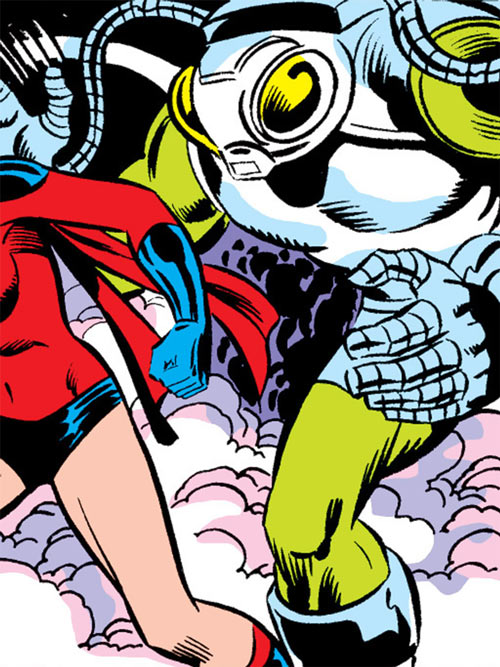 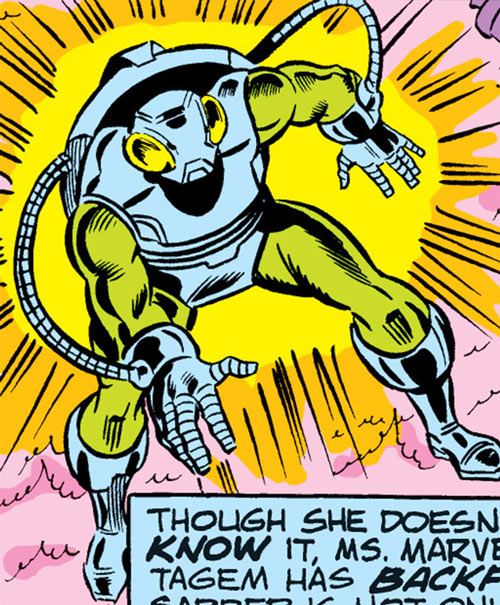 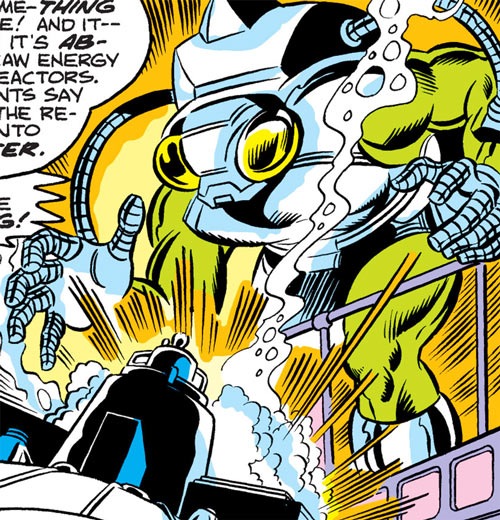