That was shortly before the Crisis on Infinite Earths, which allowed to “inject” many Charlton characters into the DC universe as if they had always been there.

For a detailed example, see our guide to the Question.

Hard-nosed general-purpose tough guy Sarge Steel was one of the characters who gained new fame after joining the DC. But let’s first explore what he was *before* the Crisis on Infinite Earths, back when he was a sort of dime novel mixture of James Bond and Mike Hammer.

This profile is continued in two parts :

Sarge Steel is a highly-trained and experienced Special Forces man. Furthermore, he was in intelligence work, and has experience as a private detective. He’s been described as a guerrilla ace. He is extensively trained in several martial arts, including fencing and hand-to-hand combat techniques to defend against armed opponents.

The captions describe him as hitting people with “judo chops”. We can interpret as Steel being trained in jujitsu. Which is credible since he probably was stationed in Okinawa before he was sent to Việt Nam.

Sarge Steel is also trained in judo. The comics included featurettes of Sarge Steel demonstrating judo techniques as they existed in the US during the mid-1960s.

The man with a fist of steel

His left fist is made of solid steel, and can be used to block bullets (!). Sarge Steel has been known to position his fist in such a way as to have the bullet ricochet back at the firer or into another opponent (in DC Heroes RPG terms, Reflection/Deflection).

In game terms, his is best done against mediocre shooters and by spending some Hero Points . His APs in Reflection/Deflection are not that great, but on the other hand this likely will be a Blindside attack against the target unless they are fully aware that Sarge Steel can do that.

Sarge Steel’s signature fist can break solid metal (such as swords or even steel gates, if he hit the lock). In DC Heroes RPG terms his Unfettered Fist Schtick represent this odd ability to hit with what is indistinguishable from superhuman strength.

Sarge Steel is a B&E and security specialist. He knows how to infiltrate well-secured perimeters (though he’s not world-class in that respect). He is very good at sentry removal (usually using non-lethal techniques). He has been trained by a locksmith, and can often opens doors using his steel fist as the only tool. He does that with a “smart rap” on the lock.

Steel is also a very perceptive man who swiftly and unhesitatingly takes correct actions after spotting threats. Furthermore, he has a fantastic instinct when it comes to danger. He also demonstrated exceptional resilience toward proven methods of brainwashing, to the point of having missions rely on him resisting such treatments.

As a Special Forces man, Steel is qualified with numerous land and sea vehicles. He’s also able to pilot small planes, though he usually requests a professional pilot when he needs to fly a helicopter or a jet.

An important part of the early — and terribly formulaic — Sarge Steel stories was that there almost always was a beautiful and particularly curvaceous young woman with some sort of tie with the enemy. She would always fall in love with Sarge Steel, and would always provide something Sarge Steel used to defeat the villain of the quarter.

This receded as stories became more complex and movie-like.

Continuity is the barrel of a loaded gun

Sarge Steel is originally a Charlton character. Those have a slightly bizarre continuity. Here’s a handy recap to keep your anatidæs in a row: 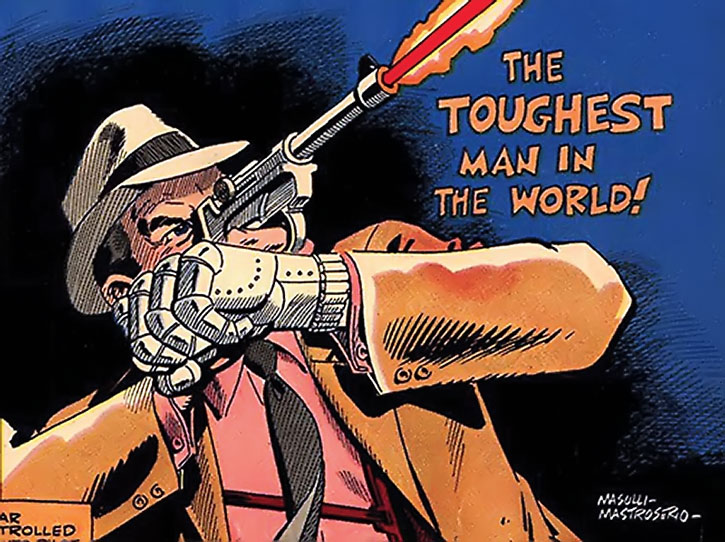 For more, you can see our Ages of DC Comics primer.

The records about Sarge Steel start in the early 1960s. He was an officer with the Special Forces — presumably meaning the 5th Special Forces Group  — operating in Southern Việt Nam.

How long he spent there is unclear. But he seemed very familiar with the ARVN  and the realities of the country. It is likely that Steel was one of the “advisors” who arrived in-country from 1957 onward. Steel was assigned to Army Intelligence operations, and worked in close contact with Central Intelligence Agency operatives in Saigon.

Steel mostly worked to counter Việt Cộng intelligence and terror operations in Saigon (later Hồ Chí Minh City), where he repeatedly ran into the work of Chinese agent Ivan Chung (no, really). In a daring operation, Steel managed to capture Chung, but this made him a target for Chung’s entire network.

The American survived a first assassination attempt. But while he was on furlough enemy agents tossed a grenade at him through a window. Steel grabbed the grenade to get it out of the room, but it was covered in a sticky substance. The explosion didn’t kill him, but blew up his left hand.

This ended his Army career. Yet, Army doctors replaced his missing hand with a solid steel fist before he was formally discharged. 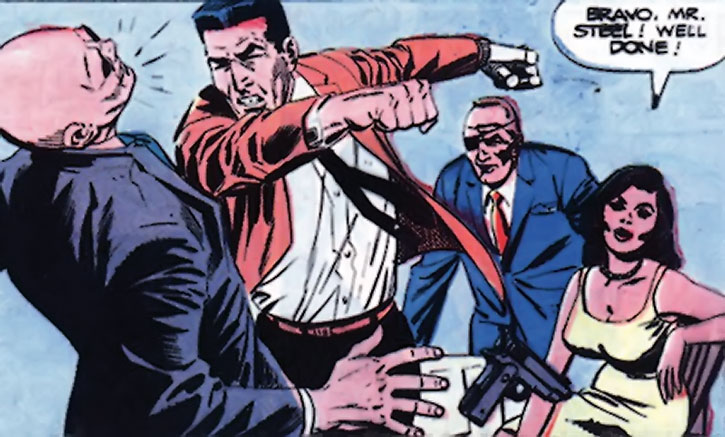 After he came back stateside, Steel became a private detective. By 1964, he was already well-established, with an office, a secretary and the like. His business seemed quite successful. Steel kept extensive contacts within intelligence agencies and the military, who considered him a war hero and a close ally.

He also cultivated a network of rich clients for whom he did security work. Thus, during the 1964 World Fair  he was one of the security consultants.

During his first documented case, Steel encountered his old foe Ivan Chung (no, really). Chung was now running some sort of mob in New York City. A dame named Lin Ying came to see him about her missing father (who had been kidnapped by Chung’s men). The case ended with Chung being arrested again, and Steel getting the girl.

Steel would clash several more times with Chung, with the villain (“half-Chinese Tong, half-Russian saboteur !” the covers helpfully explain) acting as a criminal or as a Communist agent.

During the second case, Sarge Steel was contacted by a former Captain of the Third Reich’s Navy and an Italian beauty who had hijacked a fully armed Polaris nuclear sub. Using Steel as a go-between, they ransomed New York City under threat of nuclear obliteration. They then had Steel accompany them to Monaco to run a similar extortion schemes against selected millionaires there.

However, the Italian eventually turned against the Nazi. In the nick of time Steel managed to cripple some key systems within the submarine with his steel fist – and evacuate to the surface using the launch tubes (!). The damaged Polaris is thought to have been stopped or destroyed by the US Navy. 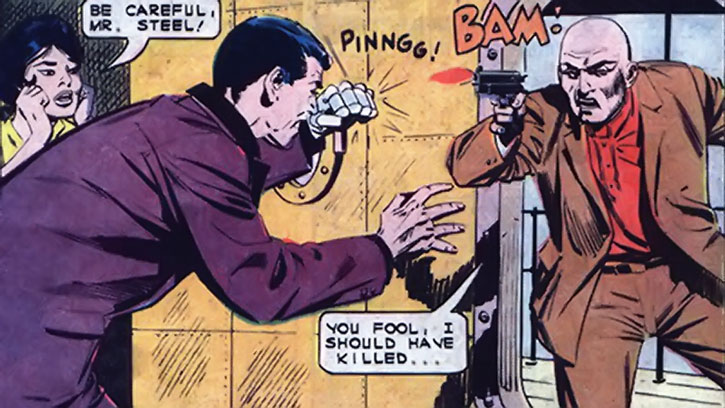 Sarge Steel also clashed with minor quasi-super-villains, such as the Smiling Skull or Lynx. Furthermore, he was contacted by the President to bodyguard an important (and very rich) sheikh visiting the USA. Steel was successful in this mission (with a little help from the US Air Force) and the White House made him an offer to work for the government again as a special agent.

Steel accepted the offer. Yet officially he was still a private detective, to maintain deniability and cover.

Steel soon became one of the best agents in the service. He worked intelligence and counter-intelligence during the second half of the Cold War. He stopped or destroyed criminal/terrorist organisations, James Bond-style villains, KGB plots and the like – essentially, he was the equivalent of a 00 agent.

Occasionally, he took breaks from the service to work as a PI, but that was a minority of his cases.

During this era Steel fought such menaces as quasi-supervillain Mister Ize, or KGB master spy Irena Dubaya. He also once operated alongside an unusual ally, the fearless French paradog.

The adventures of Sarge Steel were only chronicled from 1964 to 1967. What happened next is unknown. 20 years later, the Crisis would reboot reality – resulting in a new version of Sarge Steel for a brave new world.

Sarge Steel seems to be at this point in his early 30s. He dresses well ; though he follows conservative manners of dress (almost always wearing a suit, a tie and a hat – or a tux in social events) his wardrobe is chromatically varied and he often goes for rich colours and contrasts.

Some panels depict the steel fist moving like an actual hand, but these are rare and likely were artistic oversights.

The art in this writeup is by Dick Giordano , back then a young artist.

Sarge Steel is a virile, manly he-man of masculinity ! He’s got a gun, and a fist of steel – literally ! He emits macho vibrations that make women woozy at the knees, and they all go nuts about Sarge Steel. But of course they can’t marry him ’cause Steel wants to remain free ’cause he’s a man of action !

So, characterisation wasn’t a priority of the story. Steel was the standard manly, super-competent protagonist.

Early Steel is a typical noir detective (with dames, whiskey, an interest in rich clients, protagonist’s voice world-weary narration, an office with a pretty secretary, etc.). On top of that there various male power fantasies elements welded on and some obvious James Bond influences (the Sean Connery version – Roger Moore was in the 1970s).

He’s hot-blooded and aggressive, and will often hit enemy henchmen just to let off steam.

He’s also an avowed sucker for a beautiful woman (though he will usually realise he’s being manipulated before it’s too late). Which can be a problem since most women he encounters mysteriously happen to be amazingly gorgeous. Most nights, the handsome Steel is out clubbing and dating.

Sarge Steel doesn’t kill casually, though. This is a Comic Code Authority  book.

The stories being a typical product of their time, Steel is a racist and a male chauvinist. Middle-Eastern men are, quote, “camel jockeys”, Asia is full of beautiful and devious-yet-submissive dragon ladies, most foreign villains are Communists and they all work together, etc.. Likewise women are largely treated like children and are irrational, emotional and easily seduced then abandoned.

However, this is more tied to common mid-1960s American perceptions of how a “real man” should behave than to the character itself. Thus, it made sense for Sarge Steel to shed these attitudes as more enlightened attitudes gradually prevailed. There’s little original characterisation for Sarge Steel to retain, anyway, since he’s quite vigorously an archetype.

(Narration by Steel as his assistant wakes him up) “My secretary, a real doll who I’d hired before I even found out she could type, ruined a gorgeous dream – but Bessie was a dream in her own right !”

(Narration by Steel) “I forgot about caution and used the steel fist the medics had given me ! The door was thick, solid oak — by my left fist is thick, solid steel !”

“Leave your phone number with my secretary, beautiful… I’m in a hurry !”

“I’ve got the green light from Washington to take any steps I think are necessary to protect King Abhim while he’s in this country !”

Sarge Steel (in his youth)

Bonuses and Limitations:
Sarge Steel’s Military Science (Danger recognition) can be used even in the most un-battlefield-like circumstances (+2).

Sarge Steel also uses mission-specific gear — usually between 1 and 3 pieces of equipment per mission — that seems largely inspired by James Bond movies. This has been kept separate from his normal equipment, since these pieces of gear are usually observed but once.

Before he was a special agent, Steel spent some years as a private detective. Even back then, though, he had a semi-official status with the US military and the US intelligence community, giving him Low Credentials. His Wealth was a 005, but he had no Rich Friend.

While he takes other breaks from the services later on, these are too short to affect his Connections or Wealth. 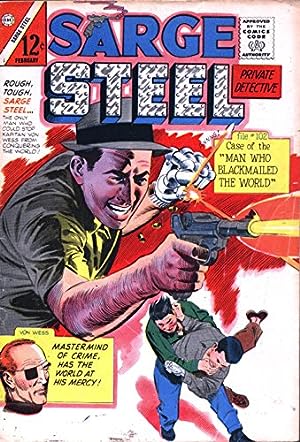 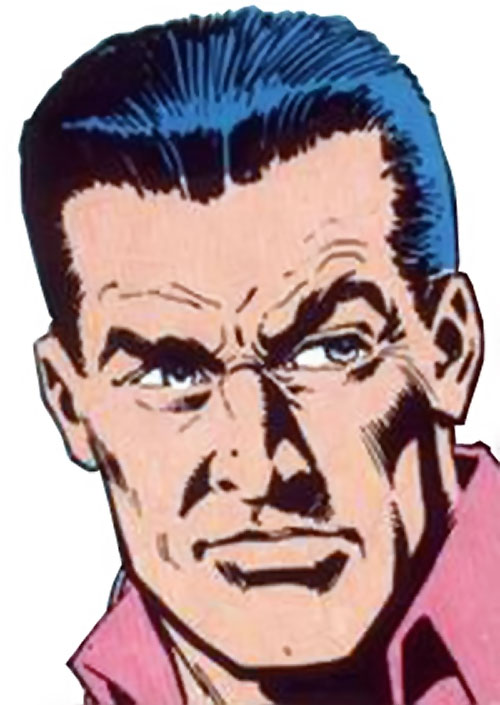 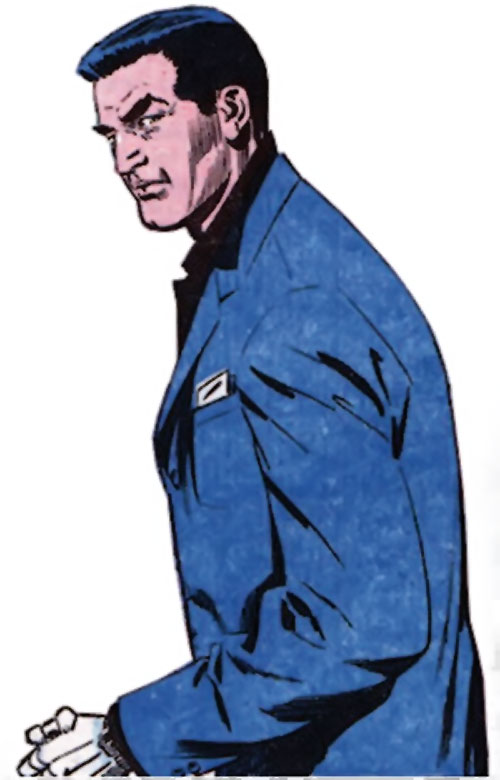 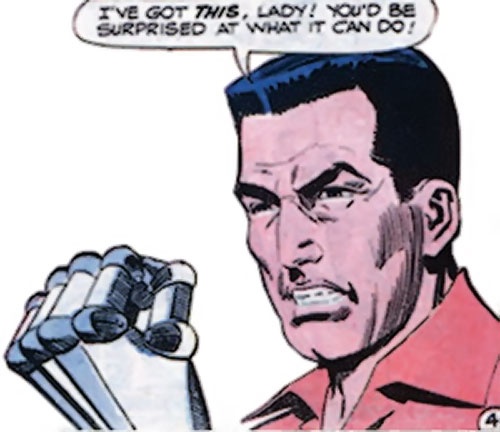 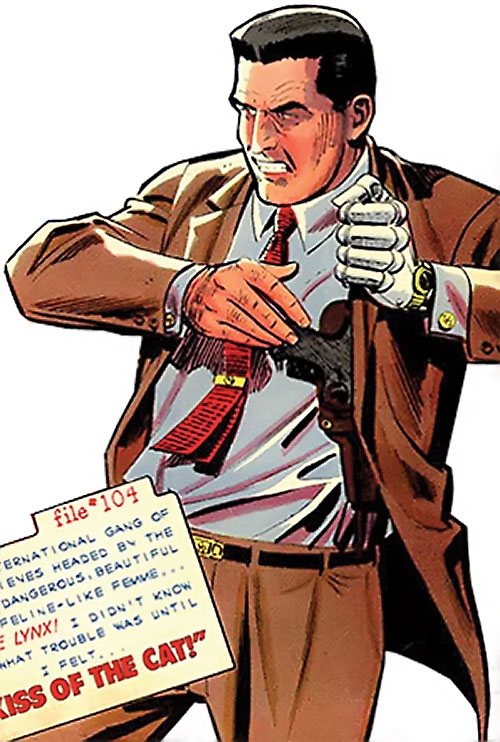 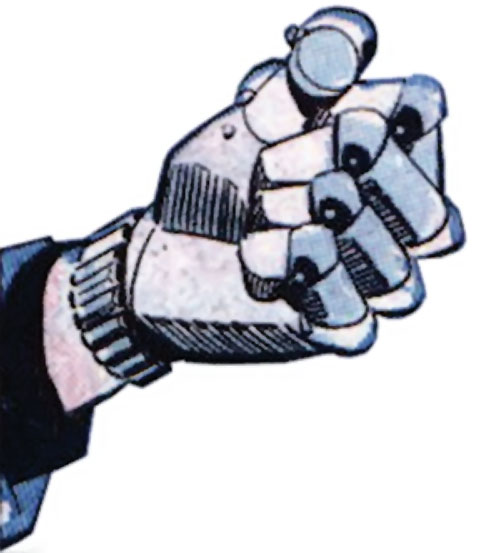 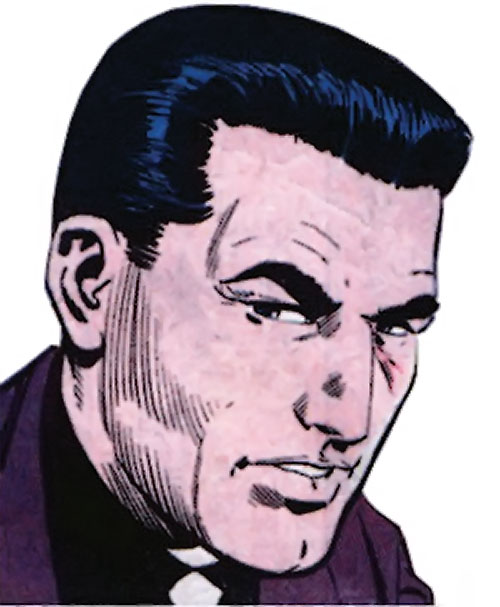 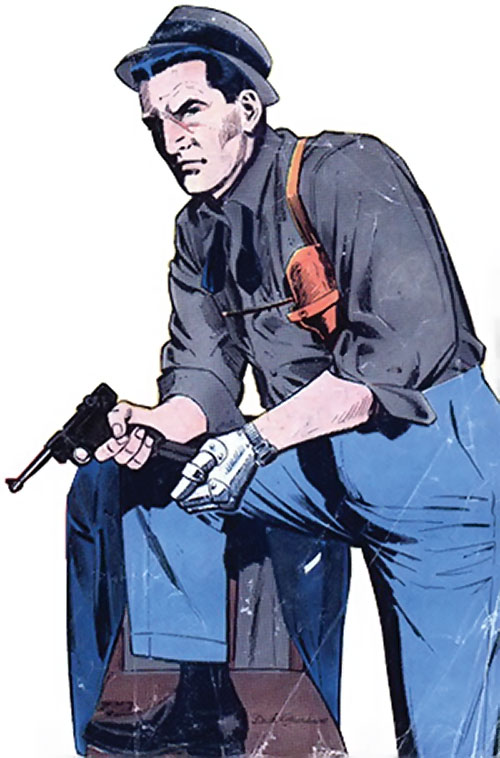 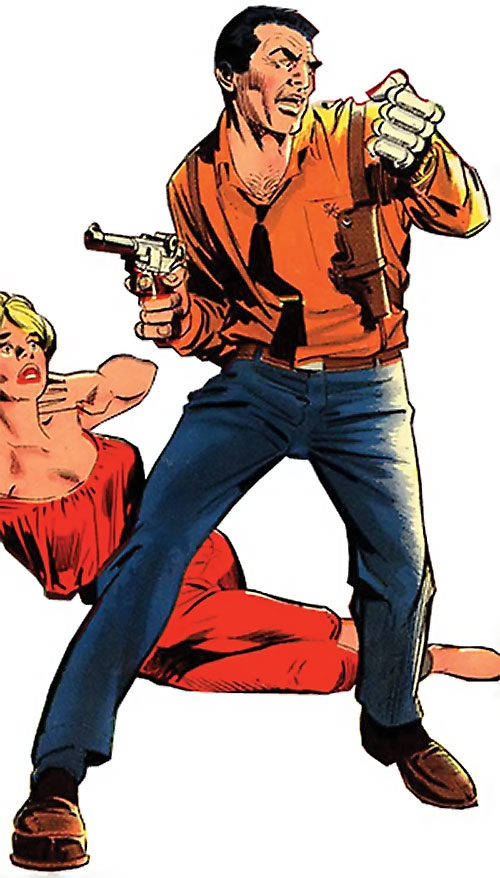 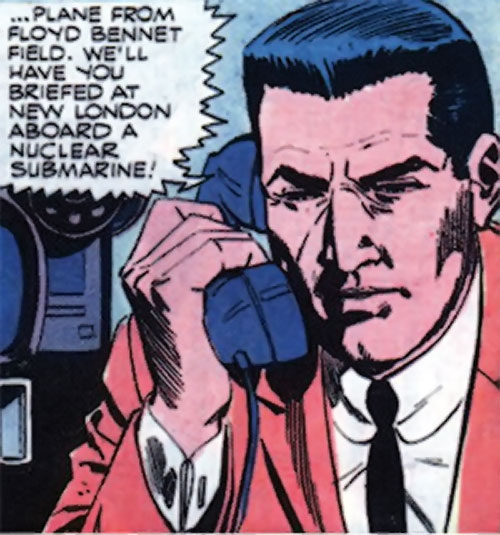 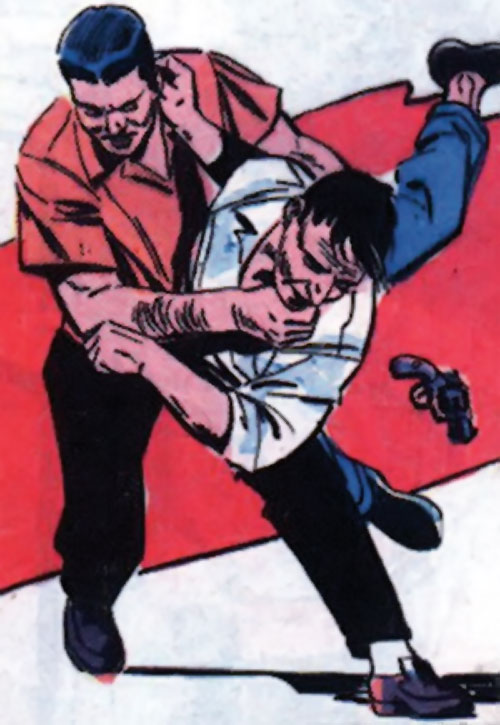 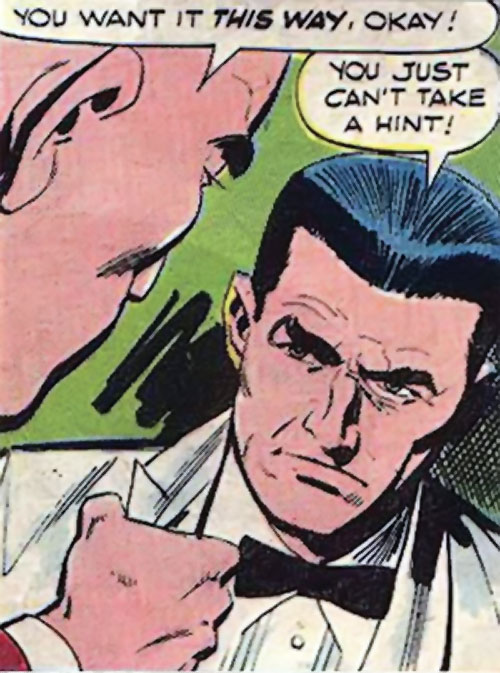 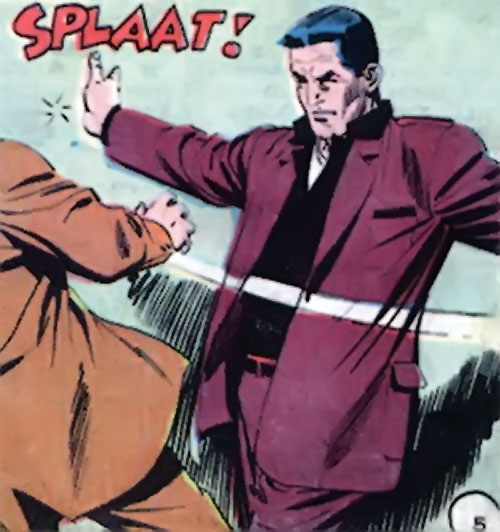 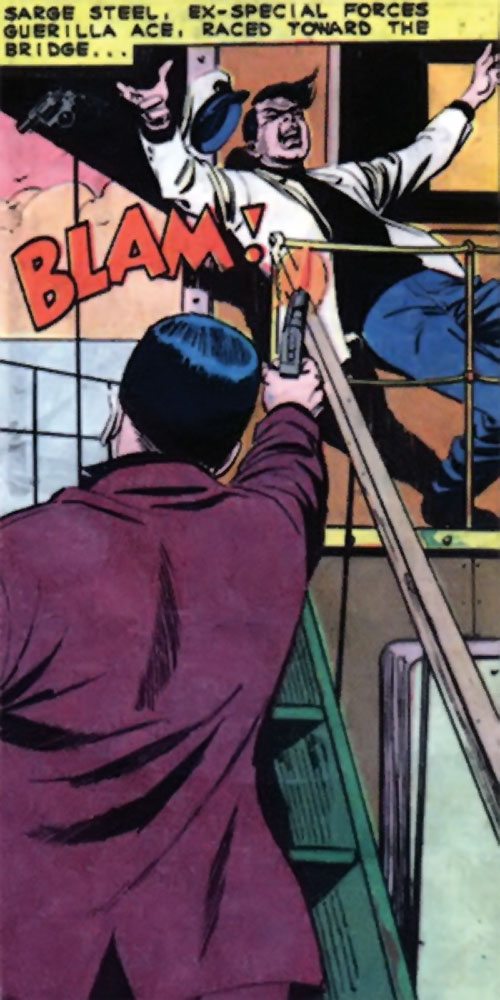 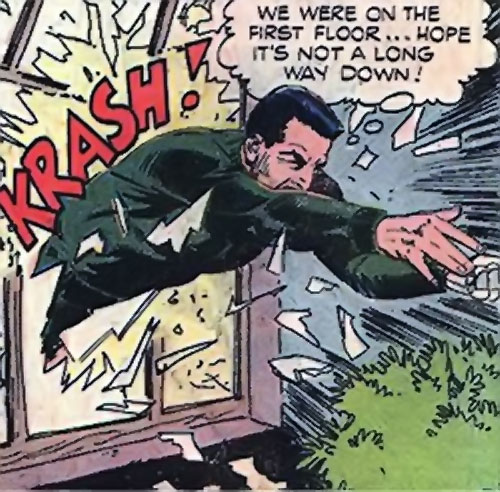 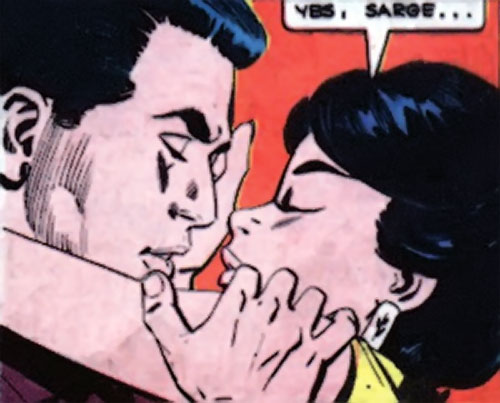