Sarnak (no, EQ fans, he’s not an Everquest character) appeared in a 1973 Werewolf by Night story arc.

The comic had been through a bunch of Gothic horror tropes à la Hammer , so at that point it tried some stock urban horror of that era.

The character could still be quite useful with some rework/evolutions.

Sarnak used to be a great sound engineer, with an excellent reputation for technical achievements. He’s also a master of electronics.

He used those skills to create his special whistle (sometimes referred to as a flute). This instrument had a painful effect on some individuals and monsters — or could make them frenzy in a state of heightened strength.

The members of the Army of Fear are urban horror bums. The lot is diseased, demented and damaged by awful living conditions. Furthermore, they were brainwashed by Sarnak into pathetic cultist-like fanatics. As a result they are barely human, and may easily be confused for relatively fresh zombies or Monster Manual -style hags and annises.

They were described as being a “stinking mould of a man, encrusted with slime and moss, reeking of dried wine and other fouler smells.” Most of them have further physical deformities. There was a dozen of them.

Sidney Sarnak used to be a highly reputed sound engineer. But he was caught producing illegal copies of popular albums. Whilst trying to escape arrest (likely in a panic), he was terribly injured, and scarred all over his body.

Once he recovered, he had to wear a mask and robes to hide his hideous condition. Apparently going insane, he spent his recovery developing sonic mind control technology. His goal was to have his revenge on society.

Sarnak was contacted by the Committee. This strange criminal organisation planned to revive the ailing American economy at any cost. The Committee that had somehow come to the conclusion that a reign of terror might help. They hired Sarnak to use his sonic technology to create a repugnant Army of Fear which would perform seemingly random terror acts. 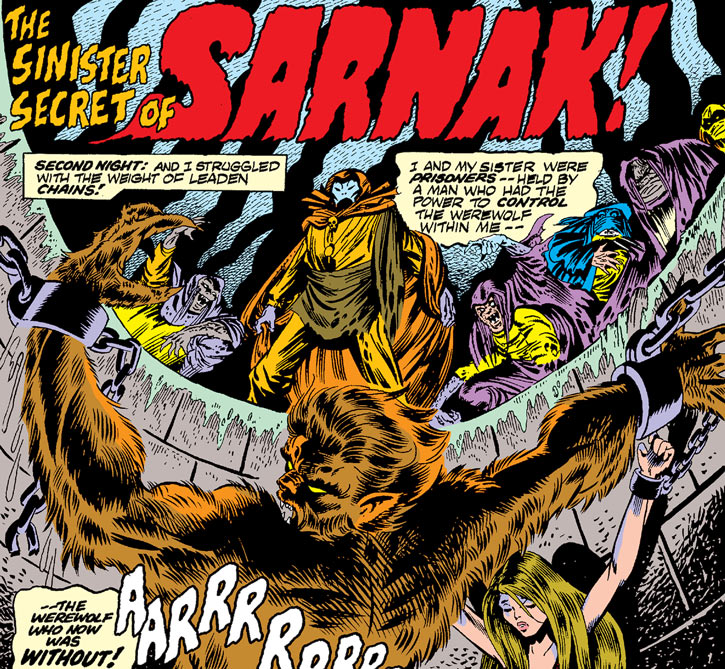 One of the first operations was to help create terror by capturing… a werewolf, more specifically Jack Russell. The Committee had learned of his lycantrophy  (and of that of his sister Lissa, though she was still to young to change). Thus, they tasked Sarnak and his nascent Army of Fear with bringing in the Russell siblings.

One of the Army’s chief operatives, drunken derelict Arnold Paffenroth (who would later become the Tatterdemalion), narrowly failed to capture the Werewolf. But a subsequent attack on Russell’s home managed to get him.

The Army of Fear then openly invaded Century City with the cowed Werewolf leading them. That caused mass panic and numerous injuries.  They further captured Lissa Russell, who was shopping there at that time. However, Jack Russell soon escaped, though he did not manage to free Lissa.

The Army of Fear then struck LA again. During this short riot the frightful derelicts displayed extraordinary strength and durability. They ignored most truncheon blows from the police and turned over one of the patrol cars attempting to box them in. Their demonstration of strength done, they retreated to the sewers.

Russell came back for his sister as the Werewolf. However, he was now equipped with a sonic screen gadget making him immune to Sarnak’s whistle. He slammed aside Army of Fear members before Sarnak could react, then shoved Sarnak around. Protected by his screen, the lycantrophe separated the engineer from his whistle.

Seeing their master down and separated from his torture device, the derelicts of the Army of Fear ganged up on him and tore him apart, quite possibly killing him.

Sarnak has not been seen since.

Sarnak is entirely covered by his costume, save for his hands. These are gaunt and bony, and covered in grey-greenish sores, scars and plaques. The rest of his body apparently follows suit.

However, his face seemed intact – which Sarnak seemed unaware of. How it works (except as a paint-by-the-numbers horror comic twist ending) is unclear. Perhaps Sarnak was so traumatised by his accident that he never dared look at his face.

Hard to say, really. He seems to be on a power trip, yet living as a shameful and masked exile due to his accidental deformities. 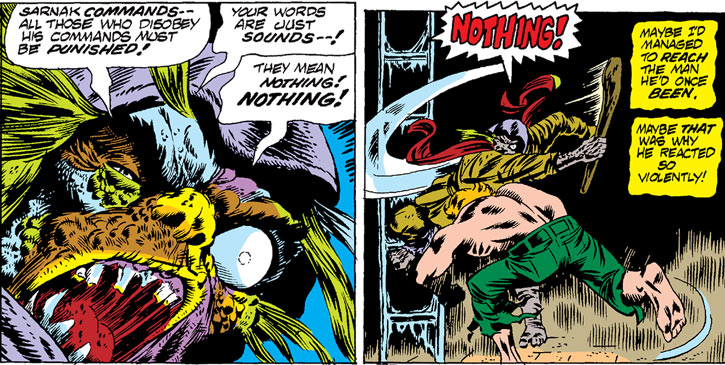 “An amusing display, my pet. Now you will learn the consequences of disobedience — by feeling the cry… of command !”

Sarnak would be a typical Batman villain, really. But of course the general idea has already been done in the DCU, and better, with Deacon Blackfire.

Sarnak can toot a special sound from his Gadget. It will give to the Army of Fears member what will seem to be superhuman strength and durability, especially given their obvious state of decrepitude.

This is the Enchantment Power of the Command. However it can only be used to enhance STR and BOD, usually to the tune of 1 AP for each, bringing them to a respectable STR 04 BODY 04. This Enchantment has an Area of Effect (3 APs), and can be re-applied as necessary.

It is unclear whether the Werewolf was also enhanced by the Enchantment. I don’t think that it was the case. It’s difficult to improve on his existing frenzy through emotional stimulation.

The case of the Tatterdemalion

Arnold Paffenroth, the future Tatterdemalion, seemed to receive further abilities under the effect of the Command. Frex he :

Tentatively, I’d advise adding a Mutation power to the Command. Howbeit, the Command would have its own specific Mutation table (likely with “cinematic psycho-killer” abilities) and it only works on some exceptional lunatics such as Paffenroth.

Some seemed to have cobbled together some armour, such as wearing crash helmets under their hood [BODY 03, Skin armour: 01].

Unlike most thugs, the Army of Fear will Team Attack when ordered to do so by Sarnak.

Initiative +0, Club +3 Close Dmg 3, Dodge 3 Parry 3 Fort 3 Will 0 Tough 3. This does not include the effects of the Sonic Frenzy effect from The Command.

Equipment 1 (Club with Damage 2, Crude light armour with Protection 1 – both are factored in above).

See the DCH discussions above for some additional ideas. 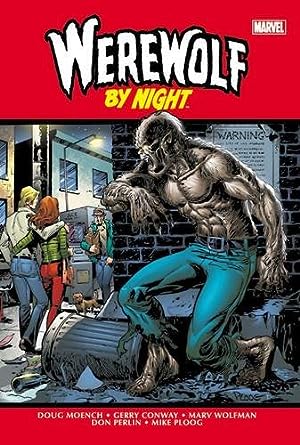 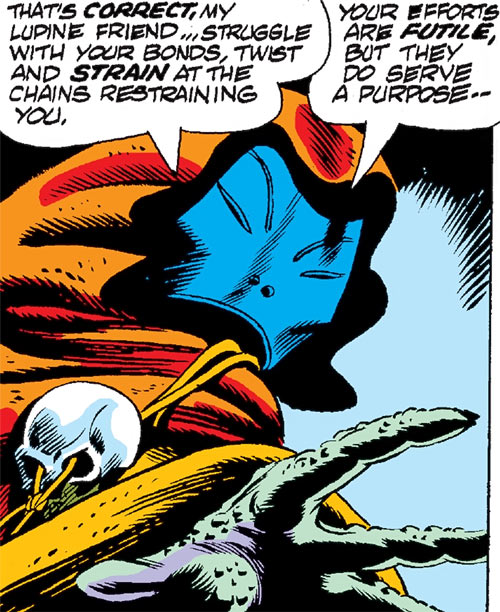 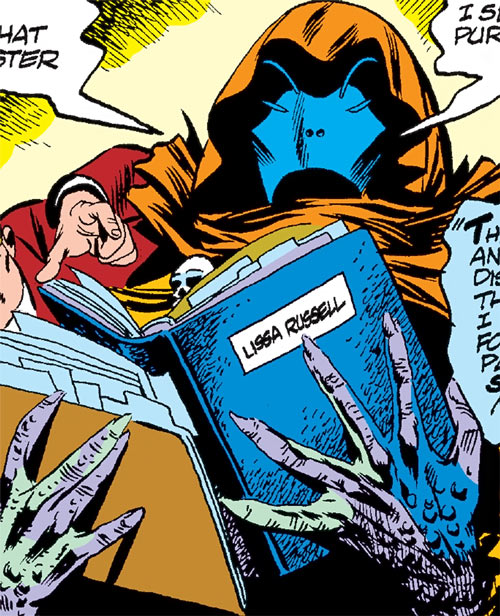 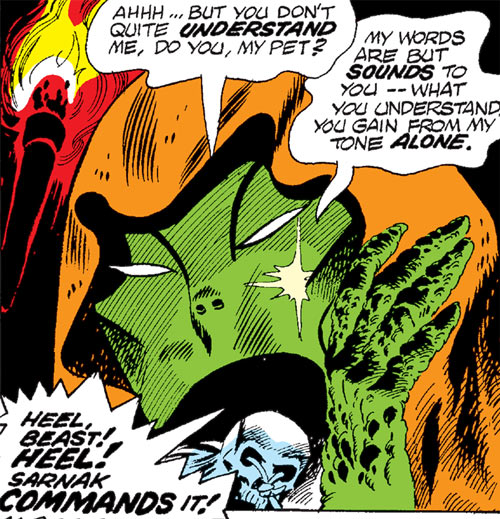 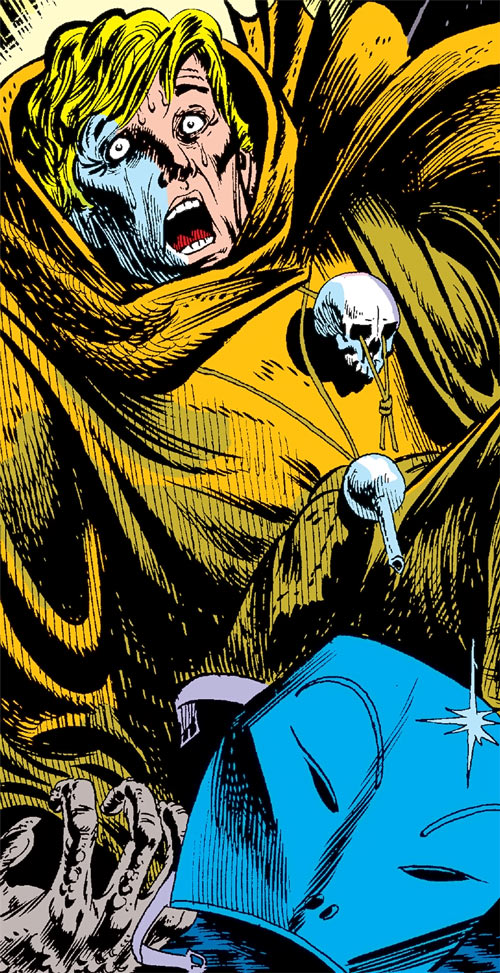