This is Satana as she appears during the limited run of the excellent Hellstorm comic. She has fallen quite a bit from her former heroic ideals. She has become manipulative, cynical and bitter about her lot.

She makes her headquarters in various abandoned buildings. There she keeps dozens of men in thrall so she can use her Vampirism and Spirit Drain on them. We never found out what’s happened to Satana in the intervening years to make her the way she is.

Daimon Hellstrom (aka the Son of Satan) and Satana Hellstrom were the children of a “demon” referring to itself as Satan.

(“Demon” is in quotes because — at the time — the Marvel position on demons was that they were powerful extra-dimensional creatures, but had no connection to Hell, the afterlife, fallen angels, etc. In other words, secular demons. But I digress.)

I do not remember any references to Mephisto, but it’s entirely possible that some writer at some point made that decision.

Anyway, by the time the “Hellstorm” series rolled around, the writers decided that Daimon and Satana were literally the children of Satan, the King of Hell. The earlier references to “secular demons” was rationalized as Daimon being in denial about his true heritage. Or something. 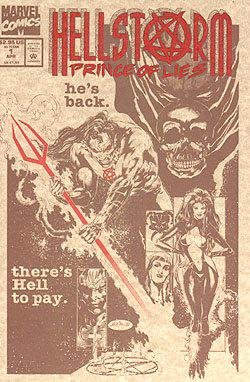