John Byrne’s Next Men was a 1991-1995 indie comics series, published by Dark Horse. It was a mix of super-heroes and Great World Conspiracy stuff. For some reason, we have little coverage of it.

The Next Men eventually returned, much later – but that was after these notes were taken. It think that the latter part of the stories also introduce major new facts about Sathanas, which by necessity aren’t in our profile.

Sathanas’s abilities stem from his mutate ability to drain life energy and use it for various purposes.

Furthermore, he was heavily modified into being a cyborg. As such, he requires no other external energies except regular intakes of others’ life force.

By supplementing his own life force with stolen life he can slow down his aging drastically. As a general rule he needs to drain approximately 2.5 people per year to prevent aging almost completely.

Still, there seems to be some electricity in his circuits as he has been known to release stunning touches of electricity against some opponents. To relax he powers down into dormant mode as if he were sleeping, and which can be done at will.

The cyborg body also makes him physically strong, durable and extremely resilient towards all types of damage.

As Aldus Hilltop he has lived a long life as a businessman and politician. While he’s no scientist, he knows quite a lot about genetics, electronics and various technical sciences. As Sathanas he is said to cover any and all contingencies.

Aldus Hilltop was an evil and corrupt man. He rose through political ranks until he reached the White House. Around the same time as he achieved that office, the group of artificial humans known as the Next Men escaped from the lab where they were created.

Aldus attempted to use them as a resource for his plans. He even slept with Jasmine, one of their number, after her memory had been damaged and she had been tricked into believing she was his wife. Unknown to him, sex with any of the Next Men would serve as a catalyst for “triggering” normal humans, mutating them.

Meanwhile a bizarre cyborg creature arrived from the future, called Sathanas. By 2112, this being was a global-scale menace. Sathanas had been driven from his own time, his power base destroyed and with fatal wounds.

Sathanas was pursued from his own time by Thomas Kirkland, who had his own shocking mission. Kirkland broke into the White House along with the Next Men, where he discovered the triggered Hilltop had gained a thirst for human life-forces. Kirkland blew the building up, killing himself.

Hilltop was terribly injured. But his charred remains were retrieved from the rubble by the people who had Sathanas’ cyborg remains. For Sathanas had travelled back in time to ensure his own genesis – and Hilltop would become Sathanas.

The official version thus became that Hilltop had survived an assassination attempt by the Next Men. From there, he became the greatest president the US ever had.

The Constitution was amended to permit him to become president for life. With the medical advances made in the future, he lived to well over one hundred years of age. During this time America experienced what can only be called a golden age.

But that golden age had a darkness at its core. Across the nation, slowly at first, human beings developed strange powers. Some used these for show business careers – to make themselves millionaires. Some, inspired by the comic books they read as children, try to become superheroes. Other fancied themselves potential masters of the world – they become supervillains.

This plague spread. Babies were born with uncontrollable powers. By 2002 scientists had isolated the cause. The trigger gene, cause of all human evolution, was being artificially stimulated by sexual contact with those who have already been triggered. That discovery does little good, however.

The more powerful mutates have already established impenetrable city states, vast kingdoms. In 2009, the United Nations refused to recognize these mutate states and were destroyed. So began the six-thousand-day war.

From 2009 to 2025, the human race was plunged into the most desperate situation it had ever faced. Then, in 2025, Sathanas revealed himself.

It is known only that he was the most powerful mutate of them all, and he had been behind all the mutate unrest from the very beginning. And that in 2112 he used a massive, focused explosion to hurl himself and some 80 of his followers back in time to the 20th century.

His true identity, that of President Aldus Hilltop, was eventually found through DNA-analysis. History’s greatest man had also been it’s greatest villain.

in 2115 Thomas Kirkland, law-enforcement officer, was sent back in time. His job was to make sure that the historically failed assassination instead succeeded. However, as far as Earth scientists understood, any change in the timeline would require action by a force from outside the natural timestream.

Kirkland was killed by security forces and the Next Men whisked away by an apparent time-traveler to locations unknown. But he detonated the White House as his dying act. Sathanas’s underlings, who had been given instructions about time and place, found Aldus’s charred remains and placed him into the cybernetic exoskeleton of the deceased Sathanas, perfectly fitting it. 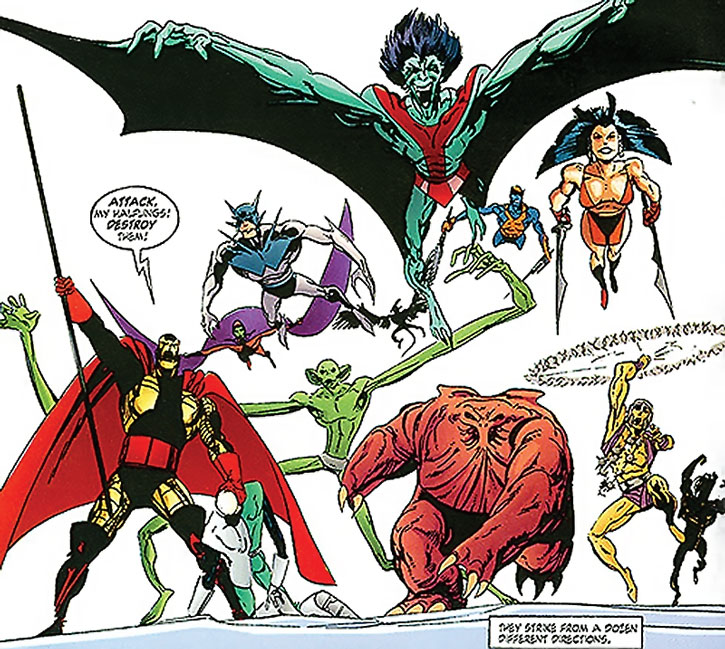 Next, the President had miraculously survived the assassination attempt and appeared on national television. The career of the greatest president was just about to start, although he might actually be a shape-shifting doppelgänger, and not the real Aldus Hilltop who had just become Sathanas.

However, it seems odd that Sathanas was supposed to have been the greatest President ever when a shapechanger might have done it instead. It was, after all, determined by DNA analysis in the future that the President and Sathanas were the same guy, which seems likely only so if Hilltop somehow managed to continue the presidency (to leave DNA traces behind; the burned down White House likely left nothing useful behind).

Whatever the case, Sathanas is guaranteed a fantastic future – his (short or long) presidency will indeed be superceded by a position of even greater power.

Sathanas is an inhumanly looking cyborg mutate. In fact, everything but his eyes, lower face and innards are cybernetic.

Aldus/Sathanas lusts for power in all forms. He is absolutely ruthless in his activities and methods. Still, he is tempered, disciplined and very patient, setting up plans that stretch over decades and later into centuries.

He goes to great lengths to cover all his tracks, presenting himself as a benevolent leader. He did, in fact, spend his last 40 years to see to it that his own great history ran its proper course, which shows how important power is to him. 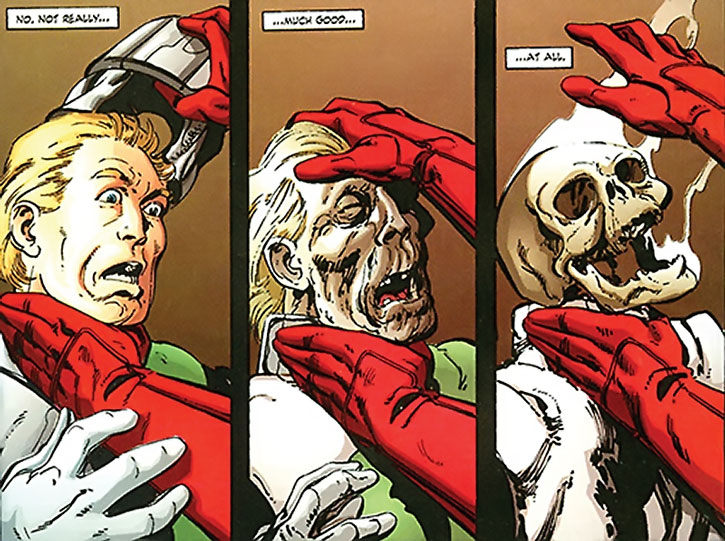 Naturally, Aldus is also a lascivious womanizer and regularly engages in kinky hanky panky. Sex is on his mind even when he should be focusing on his political goals. Of course, he is a prude in public, and also enjoys other good things in life such as art, food etc.

He is afraid of, or at least irritated by, his old time Tannen, who is immune to his death touch. Underlings are disposable, while those who pose threats to his rule have to be dealt with carefully and completely.

Furthermore, Sathanas is very charismatic and can bind most to his will. There have been hints that he requires more and more energy to survive, but that might be a psychological addiction. A master of men and supermen, he is a capable and forceful leader, and will brook no dissidents, disorder or disobedience – his will be done!

“Fool ! You are careless ! You squander your power on show instead of learning skill ! That display will cost you five years of your life. Can you feel them draining away ? Can you feel the touch of my power ? Is there anyone else who wishes to demonstrate his individuality ? We are mere hours from the commencement of the greatest enterprise in human history. Are you all too stupid to comprehend that single fact ? Must I waste time and energy dealing with you as I would children ??”

“I must go now swiftly to lead my warriors. A pity. I sense in you a strong life force. I would have much enjoyed your pain. Now I must content myself with only your life.”

“Now, don’t come any closer, if you put any value in your lives, children. I am more powerful now than you could even begin to understand.”

[To Tannen] “This is the way it was always meant to be. One who is death incarnate, and one who cannot die. Yet battling to the death !”

“I was in charge of the project that created you. My intention was to create an army of super-soldiers that would defend this nation against her enemies. But I see now a much better use for you. Join me, Next Men. I am on the verge of becoming the most powerful man on Earth, with you as the first of my mutate legions, no one can stop us.”

“Power, I offer you power, Aldus Hilltop. Power such as you have barely begun to dream…”

Advantages:
Connoisseur, Leadership, Expertise (Genetics), Scholar (Politics, The life and career of Aldus Hilltop between 1955-1995), Slowed Aging (through regular use of Spirit Drain).

Connections:
Legion of Halfling Mutates (High; around 2112 only).

Equipment:
Last-Ditch Escape Device [BODY 01, Bomb 18, Time Travel 32, Ammo 01, R#02 Limitation: Bomb and Time Travel can only be used in Conjunction (-1), resulting in everyone and everything, including travelers, being attacked by the resulting explosion. Note: The device is kept in the belt of his containment suit. Sathanas ruthlessly assumes that only he would survive the trip.]

Sathanas through the ages

In modern times, as the President of the United States, he has his presidential Connections (The White House (High) and NSA (High)) as well as high Credentials with most official institutions. The cybernetic Sathanas/President Aldus Hilltop has the above stats.

When he first arrived in the 1950s from the future, Sathanas was so badly hurt that only his head and one arm functioned properly (best simulated by a Catastrophic Physical Restriction). After he was rebuilt over the decades, he slowly regained complete mobility and his physical Attributes returned to the above values around the new millennium.

He finally died of very old age a few years later, just before Aldus was triggered and became Sathanas, thus completing the circle. In the far future, Aldus, as Sathanas, had a connection with his very powerful legion of Halfling Mutates; all previous connections were likely lost at that time.

It seems possible that he grows more powerful over time, and his Spirit Drain power might arguably be much stronger than as presented above (considering that he is supposed to be the most powerful mutate of them all). 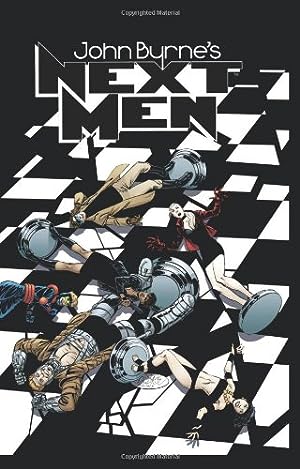 Collected Next Men by Byrne 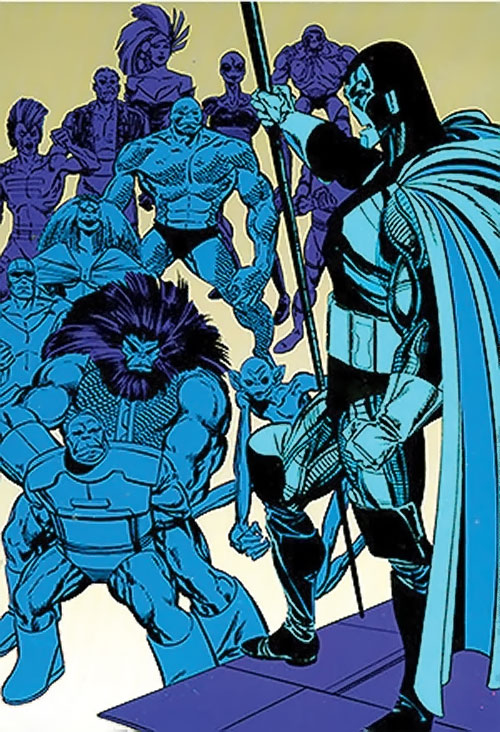 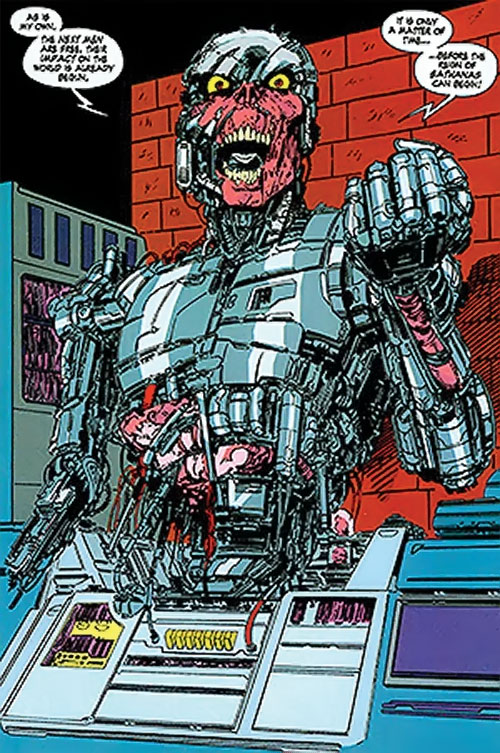