Takashi described his speciality as “infiltration”. He seems to be an expert in B&E, stealth and reconnaissance. It is quite possible he’s a former thief, especially since he’s well familiar with narcotics.

He appears to be particularly capable, collected and courageous.

He carries what seems to be a Sig-Sauer P225 pistol. This is a 9mm police pistol meant for reliable, compact carry in peaceful countries. Since he operates in Japan, that he carries a gun is notable.

Though Sato-san isn’t primarily a gunfighter, he seems competent with his Sig. And by 2003, he was all out of inhibition against killing.

Let’s go with an obvious but working choice. This is an extended live version of Tomoyasu Hotei’s most famous tune, Battle Without Honour Or Humanity.

One that’s so metal that it needs three drummers, and a bass guitar, and I think the keyboard guy also has bongos in case there’s still a lack of drumming. Unsurprisingly, it requires decent bass rendering.

Takashi Satō is a Global Frequency expert in Osaka, Japan. However, during the early 2000s, he was sent on missions that took a severe psychological toll. There were apparently two separate engagements :

(The latter is presumably a reference to Battle Royale . Which is a 1999 Japanese horror parable about children being turned into cannon fodder, particularly during WWII. This was then rehashed into commercial products because we’re hopeless.)

The psychological damage meant that Takashi no longer considered himself fit for duty. His desensitisation was severe enough that he just didn’t care about human lives anymore. Instead, he became a trainer for other GF operatives.

In 2003, the Osaka Prefectural Police requested Global Frequency support after losing two officers. Satō-san had just the right skills and was nearby. Aleph forced the issue, since more than a hundred lives were at stake. Furious, Takashi agreed to be on the Frequency one last time. But he told Aleph he’d kill her if they ever met.

The crisis site was some sort of research clinic. As Aleph hacked her ways into encrypted records and Takashi snuck his way through the premises, it became clear it was the worst.

This hospital was conducting a host of advanced research, most of it illegal. Bioreactors to mass-produce human tissues, unethical stem cell research, use of designer narcotics for anaesthesia, etc..

Takashi soon discovered that patients and vat-grown tissues had been turned into living, conscious human tapestries and statuaries. Stumbling upon these horrors was what had resulted in the suicide of one of the responding patrolmen.

Some of the biological ornaments that could speak begged for death. Mr. Satō thus shot dead what he could discern in the tangled spreads of flesh.

Though he was in shock, Takashi continued. He now was determined to end this, and himself.

The doors of perception

As he investigated, Mr. Satō put together what had happened. A small electrical fire had detonated experimental psychotropic gasses used for anaesthesia. This mix had severely warped the brains of the surgeons.

Using the patients and artificial tissues, they had been turning the facility into a sort of temple celebrating the beauty of the inside of human bodies.

Medical experts on the Frequency confirmed Takashi’s conclusions, using his HD footage of the demented surgeon’s altered eyes. Their best guess was that the damage was permanent, as the gasses likely bound directly to the brain.

Takashi advocated for an incendiary airstrike. By this point Aleph was also starting to go into shock. But the footage she sent to the Japanese authorities convinced even the JSDF (not the greatest fans of incendiary bombing ) to authorise an immediate strike.

Though Takashi was ordered out, he explained it was too late. He then filmed his eyes to show Aleph that he too was now irreparably affected by the gasses in the air.

Satō-san killed himself as the bomb (presumably a 500 lbs. MK-77) was on its way to sterilise the site.

Takashi appears to be in his late 20s. His swagger, bleached spiky hair, sharp features and leather motorbike jacket evoke the usual image of the Japanese street tough bad boy with mob connections.

Several aspects of Takashi are reminiscent of a young “Beat” Takeshi Kitano , an influential TV and cinema personality. Kitano-san also had a major role in Battle Royale.

When he appeared, Takashi was spent and badly hurt. He also considered himself to be homicidally dangerous due to trauma, and thus refused to be in the field.

He had an uncaring, unfiltered, vaguely nihilistic attitude. He also evidenced paranoid reactions, briefly rambling and accusing the Frequency of being out to test and destroy his sanity. However, his sense of responsibility and his duty to save lives were still stronger.

When on-site, he started going into shock. But his previous harrowing experiences meant that he instead went into a state of cold, collected, murderous hatred against whoever had done this. This is also presumably the point at which he decided that he wouldn’t outlive the op.

(To Aleph) “Give me the briefing. But first, understand this: make very certain that I never meet you.”

“You will tell me what you have done. Or I will kill you, and then kill all your friends, and then find your family. Because I genuinely no longer care whether anyone lives or dies. Which is why I am not supposed to be doing this job.”

Drawbacks:
Serious Rage, and presumably a dependency on antidepressant drugs (legal or not).

As with John Stark, I went a bit long on skills he likely possesses but were not demonstrated.

Normally I’m conservative about these, but certain writeups are more useful when they do not strictly stick with observed performance. 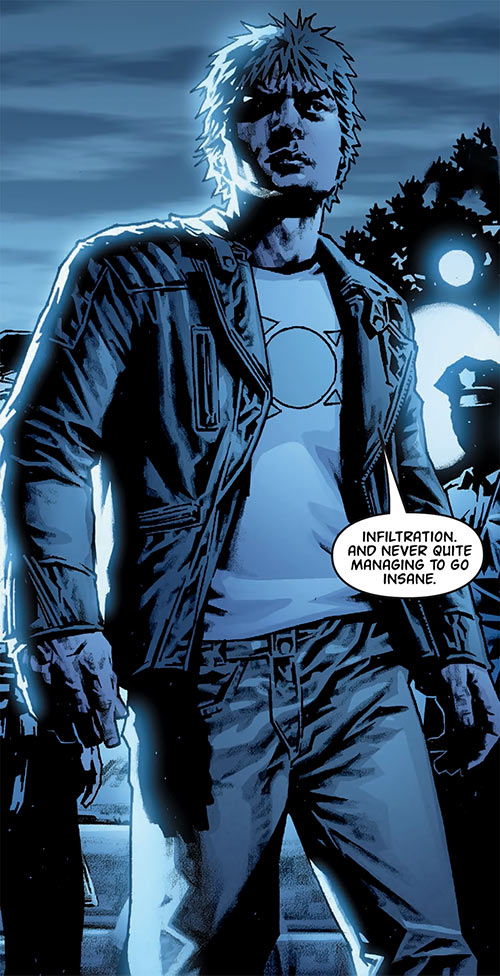