Saturn Queen has mental powers, like most of the inhabitants of Titan. She calls her power “super-hypnosis”. It is a set of mental abilities that includes some telepathy and some power of hypnotic control.

Saturn Queen has no significant combat abilities. But like many residents of the 30th century, she is familiar with space travel (Vehicles/Space). She wears a jet pack that allows her to fly.

In the “Five Year Gap” timeline she used no equipment initially, but is now the possessor of the fabled Hypno-Stone, which presumably amplifies her hypnotic powers by a considerable degree.

Saturn Queen is apparently a native of Titan, born in the latter half of the 30th century. She battled the Legion of Super-Heroes along with Lightning Lord and Cosmic King as a member of the Legion of Super-Villains. On other occasions, these three have been joined by other LSVers including Sun Emperor, Beauty Blaze, and Echo.

However, this LSV was not contemporary with the LSH. Rather, these were older villains claiming to have come to the Legion’s time from further in their own future. It is unclear whether or not these claims are true. In this timeline, the LSH never met a younger, contemporary version of Saturn Queen (though they would in the partially rebooted “Five Year Gap” timeline – see below).

In any case, Saturn Queen is definitely a time-traveling villainess with mental powers and a particular rivalry with Saturn Girl. She and her comrades have fought Superman and the LSH on several occasions, each time being defeated.

On one occasion her criminal tendencies were apparently “cured”. That happened when Superman exposed her to a chunk of rock from Saturn’s rings. These have been reported to have psychoactive properties contributing to the psychic powers of Titanian natives and to the orderliness of Titanian society.

Saturn Queen’s last clash with the LSH was chronicled in Adventure Comics #331, published in April of 1965. That would have been about the year 2976 in the Legion’s timeline. Some reports indicate she was extradited to her native time to be imprisoned, others that she was incarcerated on a prison world in the LSH’s own time.

As of 2989, she still had not been seen again, nor had the Legion discovered a “contemporary” Saturn Queen in their own time.

The Legion of Super-Heroes had its first encounter with a Saturn Queen who was their contemporary (rather than a time-traveller) late in the year 2994 of the “Five Year Gap” timeline. This Saturn Queen was revealed to be Eve Aries, heir to the largely ceremonial throne of Titan.

Note that, in this timeline, there were numerous reports of a contemporary (in other words, one not time-traveling) Saturn Queen active with the Legion of Super-Villains during the years between 2976 and 2994. Laevar Bolto, alias Cosmic King, has several times accused Eve Aries of participation in the LSV. But no evidence has ever been found to link her with any of Bolto’s crimes.

According to Science Police files, Bolto attributes the failure of investigators to gather evidence against her to the use of her hypnotic powers. If so, she alone among the LSVers has consistently escaped detection and capture, which would indicate that she tampered with the minds of many of her teammates.

These allegations are completely unproven, however if true, her “Five Year Gap” Hero Points are actually 65, not 35.

Eve was encountered – and, we should note, immediately recognized – by once and future Legionnaire Tenzil Kem (Matter-Eater Lad) on the world of Tartarus. She had recently become the twelth wife of the ruler of Tartarus, a former Legion foe named Prince Evillo.

Eve did this in hopes of finding the Hypno-Stone of Ouranos. This is a fabled lost gem with hypnotic powers which once belonged to the Titanian Royal Family. Evillo coveted it to enhance his own modest hypnotic abilities.

The stone had been stolen in the 2970s by the renegade Green Lantern Vidar. Vidar used it to enhance his already considerable hypnotic abilities, becoming the famed criminal Universo. The stone was in his possession until 2987, after his second conquest of Earth was ended. Earthgov confiscated the stone, though it rightfully belonged to Titan.

Before negotiations on the stone’s future could get too far, the economic collapse of 2989 hit. All diplomatic ties between Earth and Titan were severed. The hypno-stone remained on Earth until it was stolen in 2993 by the master thief Magpie. Magpie fled to Tartarus with it. But his negotiations to sell it to Evillo broke down when Evillo and Magpie quarreled over a woman.

Magpie was forced to flee the planet – but only after hiding the stone. Shortly afterward, Eve Aries, heir to the Titanian throne, came to Tartarus, where she and Evillo were married. Each of them entered the marriage with ulterior motives, planning to use the other to find and claim the stone.

Eve located the stone in mid-2995. But she was immediately caught by Evillo, who grabbed it away and enslaved her with it. His scientists encased her in a statue which amplified her powers, transforming her into a psychic “antenna” with which to enslave the populace.

However, Saturn Queen managed to send a psychic distress call to Legionnaire Tenzil Kem. He rescued her with the help of former Legionnaire Polar Boy and several young Tartarun heroes.

She took the stone back to Titan, where she claimed her throne… and Tenzil as her consort, as an old law required her to be married if she was to inherit. The two then went on an extended honeymoon, as the law also required that Eve produce an heir “the old-fashioned way”.

Presumably by “old-fashioned” Eve is referring to the requirement that they be married before – or at least, right after – they begin producing.

Apparently, none of Tenzil’s Legionnaire teammates found his uncharacteristic decision to get married to the cute redhead troubling. Even though he was marrying a woman:

An adult woman (possibly in her late 30s or early 40s), Saturn Queen is still relatively fit and striking. She has red hair cut slightly above her shoulders and brown eyes.

Her costume has the “Saturn” symbol in yellow on her chest. The bodysuit is royal blue with a matching skirt, red belt, and red, high-heeled boots. Her neck, shoulders, and sleeves are very dark blue, almost black, with red around her wrists and a stripe of the lighter royal blue running from her shoulders to just past her elbows.

In the “Five Year Gap” era, Saturn Queen is noticeably younger and is quite beautiful. She does not wear a “supers” type costume, instead dressing elegantly and richly as befits royalty.

Saturn Queen is basically a one-note Silver Age  villainess, doing evil deeds because she likes being evil. She typically uses her powers to make innocent civilians or animals battle her foes rather than trying to control them directly, creating illusions to put them off-balance. She’s also been known to try and make a hero so loathe himself that he will commit suicide.

It appears, though, that the influence of Saturn’s rings “cures” her of these criminal tendencies. These make her a law-abiding and even heroic person. The ethics of tampering with her mind and personality to remold them to your liking we won’t get into… who knows what kind of Identity Crisis  that could set off ? ;-)

The “Five Year Gap” Saturn Queen seems much more easygoing, with a bit of the thrill-seeker to her. She doesn’t seem particularly vengeful or criminal, though she enjoys outwitting or shocking others. She is very self-confident.

Her primary drive still seems to be acquiring power, though. She entered a loveless marriage with Evillo so she could find the Hypno-Stone and claim the throne of Titan.

“I’m from the planet Saturn, where there has been no crime at all for centuries — and where everyone can perform amazing mental feats ! One day, when I traveled to Earth, I felt a sudden desire to outwit the law with my powers of super-hypnotism ! And so I joined the Legion of Super-Villains that existed there !”

“Fool ! I, Saturn Queen, tricked you with an illusion I created with my power of super-hypnotism !”

“Kill her ! Stamp her into the ground !”

Tenzil Kem – “See, I figure you’re not here of your own free will… Maybe fate brought me here because you need to be rescued by a handsome prince.”
Saturn Queen – “Oh, you are such a funny man.”
Tenzil Kem – “Uh, okay. It was only a theory.”
Saturn Queen – “I’m the last person on this world who needs rescuing.”

Tenzil Kem – “I mean, don’t get me wrong, Eve — there’s nobody I’d rather rub navels with than you. But I just don’t see myself as the marrying kind.”
Saturn Queen – “Oh, come on, Tenzil. It would be so perfect ! You and me —unleashed on this dreary, stuck-up world… you’d have me… my undying passion… fabulous wealth…”
Saturn Queen – “Fabulous wealth ? There’s a cash prize ?”
Saturn Queen – “Tenzil ! Don’t even think about marrying me for the money !”

As far as I know, neither of the post-Zero Hour versions of the Legion have encountered Saturn Queen, but there’s no reason she couldn’t show up. The original would only appear by means of Hyper-time, but that’s not out of the question for her.

Feel free to play with the temporal anomalies that surround her and other LSVers like Lightning Lord and Cosmic King. Their status as time-travelers and their history of showing up in timelines that are not quite their own means they can show up anywhere and anywhen, as seen in the recent Batman/Superman comic book.

They may also be agents of Glorith or the Time Trapper (or another time manipulator, like the Lord of Time, Extant, Mordru, etc.).

Saturn Queen can be used as a quieter, more devious type of villain, which may be her role in the “Five Year Gap” era. Rather than dressing up in spandex, she might be more effective as a con artist, spy, or politician. Or, y‘know, all three at once.

Drawbacks:
Secret Identity, Miscellaneous: exposure to certain minerals from Saturn’s rings (either on Titan or if she carries smaller chunks of the minerals) causes Saturn Queen’s Motivation to change to Upholding the Good.

A Queen for All Time

Use the following stats for the Five Year Gap Saturn Queen. Note that she is much younger and somewhat less experienced than in her Adventure Era appearances, even though they happened earlier (time travel headaches!). Some powers are weaker, and her HPs are apparently lower – 35 instead of 65.

However, as noted in the Five Year Gap History below, this seeming inexperience may be a ruse, in which case her HPs go back to 65. Either way, she has some Advantages that her older self does not, and she does not appear to have the Drawback of her Motivation flip-flopping when she touches rocks from Saturn’s rings. Her behavior and personality was the same on Titan as on Tartarus.

Note that Eve as shown here is intended for campaigns set after LSH v.4 #50. If your campaign is earlier – such as during her two “on- screen” appearances during the “Five Year Gap” period (i.e. LSH v.4, Giffbaum Legion, etc.), she does not yet possess the Hypno-Stone or her Credentials as titular head of state for Titan.

Nor does she have Tenzil Kem as a Dependent or a Connection to the LSH.

Equipment:
Hypno-Stone of Ouranos [BODY 12 SPI 12, Control (ML)*: 16, Hypnotism (ML)*: 16 ; Limitations: the Hypno-Stone’s powers can only be used by someone with telepathic or hypnotic powers of their own]. 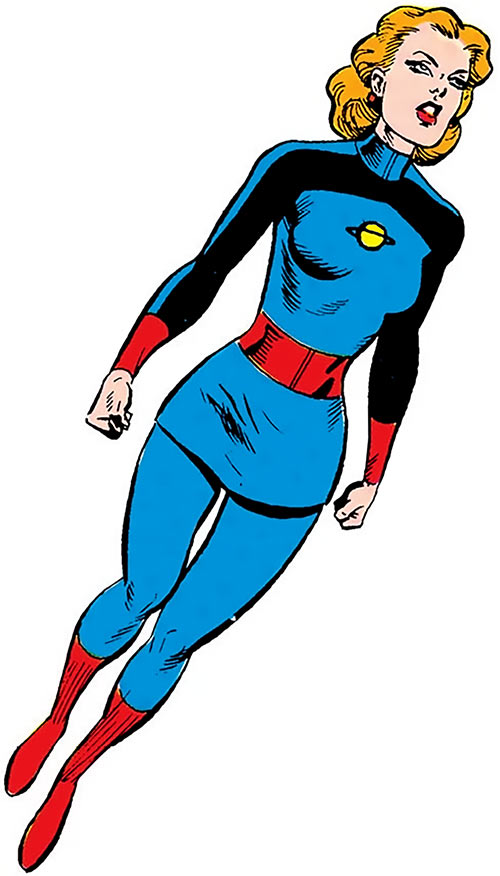 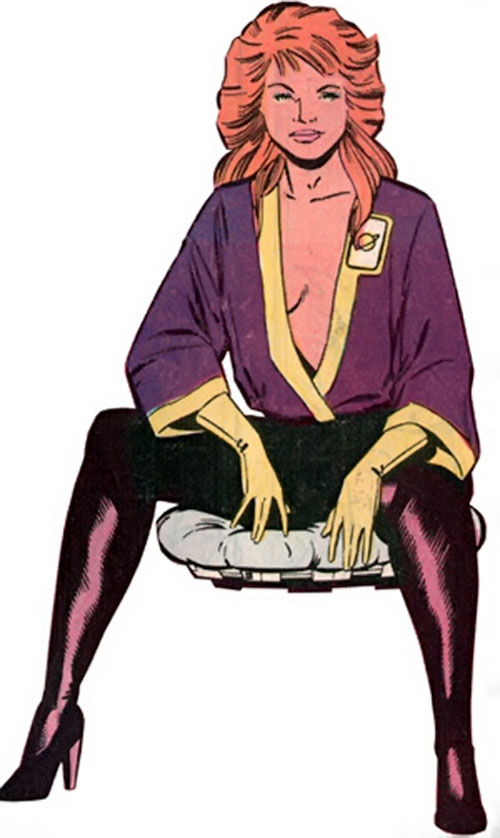