Mutates are superhumanly strong and savage. For some reason, they speak fluent modern English.

Mutates have inherited the Earth in a possible future. This timeline  through at least two atomic wars. Despite the opposition of scientists, nuclear bombardment continued. And as predicted, it turned some humans into a new race. First there were semi-mutates, then full mutates.

The mutates apparently exterminated the humans. Since they mentioned that humans did not fight back, it is possible that all soldiers, exposed to nuclear radiation, died or turned mutate, leaving only defenseless civilians.

When the gods call

This possible future was found of interest by the Greek underworld god, Hades (aka Pluto). Hades used mutates as his shock troops twice.

In the first case, he brought the Atomic Research Center from Manhattan to the mutates’ future. Then they travelled back through time to attack 20th century New York City. They ran straight into Thor, Balder, Sif, and elite American forces. Eventually Zeus defeated Hades.

The second time, a force of mutates was sent by Hades to the UCLA campus to locate Aphrodite. She was then living as a mortal teacher. The mutates were defeated by Hercules and Aphrodite. 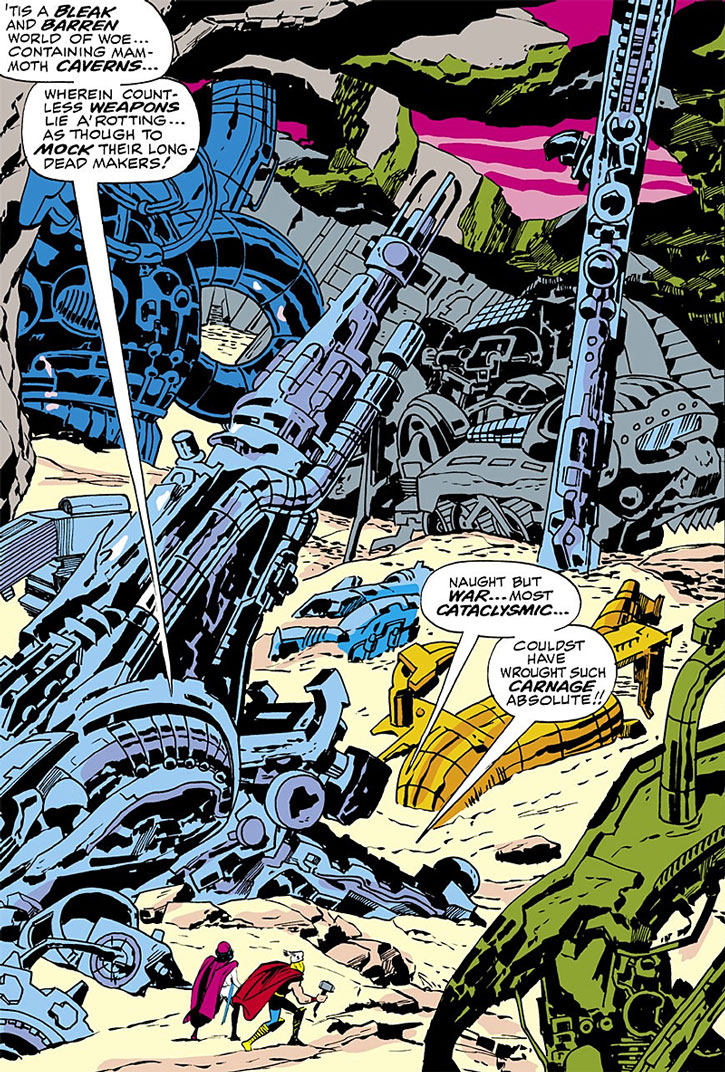 “We have gathered weapons… since the day of the monstrous fire cloud ! Weapons that will serve us now !!” 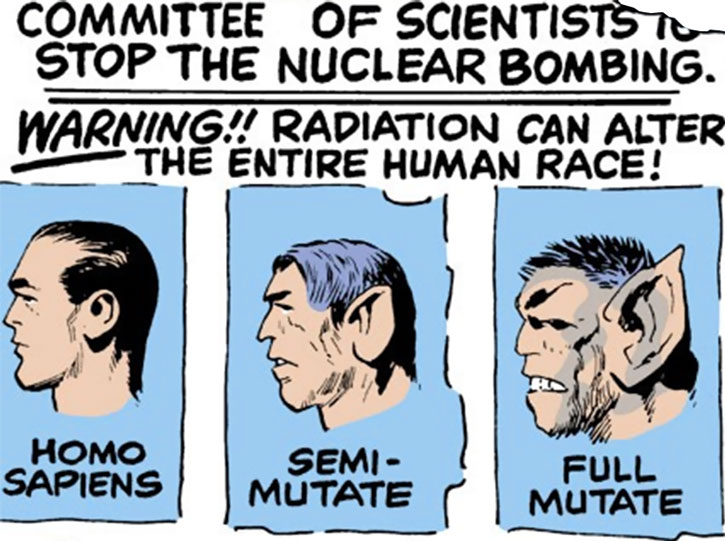 “There is no wrath as deadly as the wrath of the mutates !”

(The Tribal Chief speechifying) “You ?? A smooth-skinned, lone intruder ?? You… who have the form and features of a lowly human ?? My people despised them… because the humans would not fight ! But the mutates live for battle ! And we attack… we destroy anything human on sight !”

Equipment:
The atomic mutates have a rag-tag assortment of weapons, ranging from home-made melee weapons to salvaged military hardware from the Atomic War.

As a dice action, all the mutates who can rush the target within that Phase can add their STR to perform a Wrestling or a Submission Hold manoeuvre. This is AP maths, with a upper limit of +3CS above the highest STR.

Hail to the king, baby

The mutates (or perhaps just this tribe of mutates) are led by a chief who is the strongest and deadliest of them all.

Equipment:
The chief had access to all of the weapons the mutates did (and was the one holding the “remote” for the Attracto-Spheres), but he favoured his custom weapon. This is a stout staff with a warhammer on one end, and a hook on the other – the latter being used to trip opponents by hooking their ankle.

Chief’s Staff [BODY 12, EV 05 (12 w/STR), +1CS to Block melee attacks, can execute tripping attacks]. This weapon was damaged, perhaps even destroyed, by Hercules. But he might have others.

By hook or by crook

The Schtick (tripping attack), along with an appropriate weapon, can allow the fighter to attempt a trip attack a a Dice Action. This pits his Weaponry/STR against the DEX/DEX of the opponent. Any RAPs are subtracted from both the OV and the RV of the opponent during the next Phase. 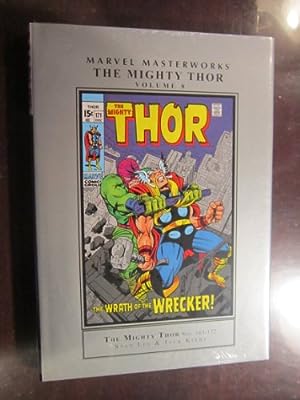 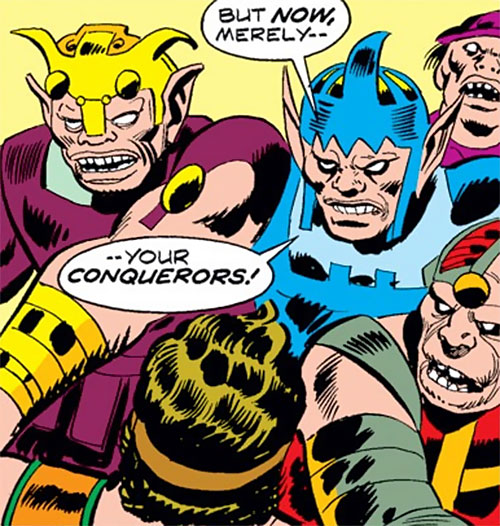 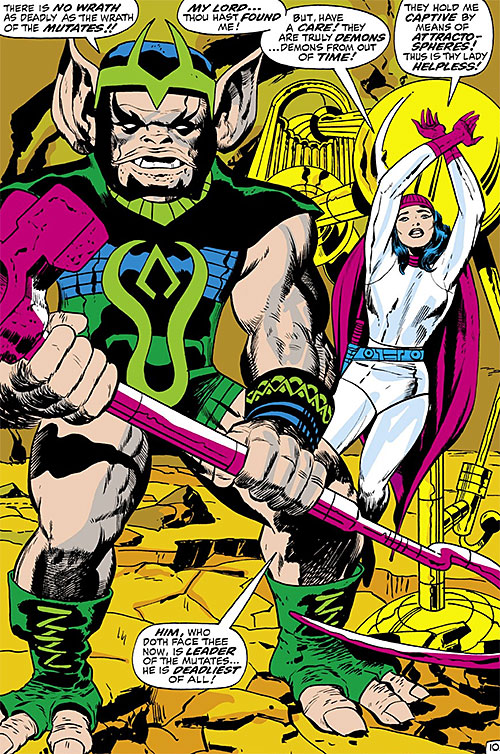 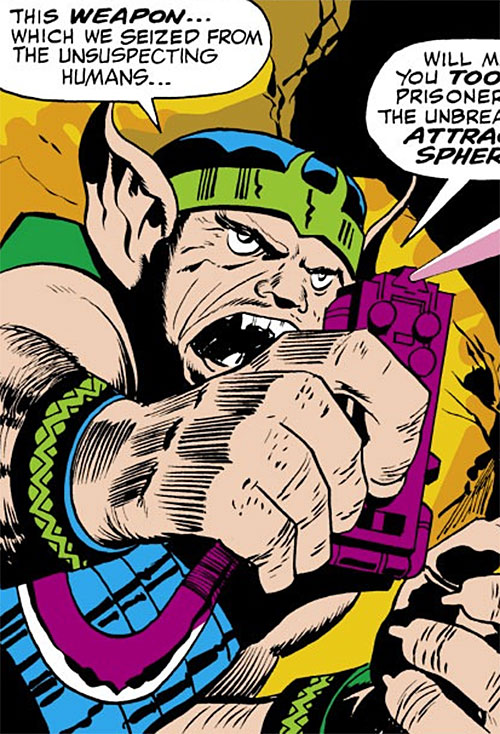