Savant was a Birds of Prey character during the Gail Simone era. He first appeared in 2003.

Savant and his partner Creote were unexpectedly popular, as they resonated with Tumblr and other communities beyond the hoary core super-hero comics fandom. Thus, they became recurring characters, enduring into the 2010s.

He’s also skilled with computers, and at finding out secrets, which he used to use for blackmail purposes.

He also speaks a number of languages at different levels of fluency. His French grammar is spotty, his Chinese is that of a sporadic tourist, and his Greek is flawless. But he can hold a conversation in all of ’em.

Brian Kenneth Durlin was the spoilt heir of a rich and respectable family. However, his inability to distinguish the passage of time was obvious from an early age.

Due to this rare handicap, Durlin dropped out of med school, law school, and several martial arts schools. His father sent him to Athens for several years, but he had to leave when his blackmail activities drew police interest. The elder Mr. Durlin didn’t react well, and left him broke and disinherited.

Moving to Gotham, he became a costumed vigilante, taking the name Savant. But he was ordered to stop by Batman, due to his focus on beating criminals over saving innocents.

He instead turned his skills to blackmail full time. Durlin thus amassed a sizable fortune and database in this pursuit. He also recruited former Russian soldier Creote as his bodyguard. The pair formed a close attachment, Savant coming to rely on Creote for help with his memory.

Desiring revenge on Batman, Savant set a trap for Oracle. Capturing Black Canary, he tortured her. Savant threatened to kill her unless Oracle provided him with Batman’s real name.

Oracle recruited Huntress to hunt them down. She and the escaped Black Canary, nursing broken legs, managed to beat Savant and Creote. After destroying his database, and backup, they handed Savant and Creote over to the authorities.

Savant was sent to Arkham Asylum, while Creote was shipped to Blackgate. Savant was soon confronted by a new guard who was in the employ of one of his former victims, Senator Pullman. The man tried to beat out of him the location of his database, but Savant turned the tables, subduing him and escaping in the guard’s uniform.

Contacting Senator Pullman, he offered a deal that would allow both of them revenge on Oracle. Durlin promised to discover her true identity in exchange for Creote’s freedom. A number of potential candidates were rounded up by the Senator, and held in an illegal jail where they were interrogated.

Having second thoughts, Savant didn’t tell the Senator which was Oracle when he’d identified her. Instead, he made a deal with her. He helped her escape and get Pullman arrested, and she decided to try and rehabilitate him, getting Creote released.

Oracle set the pair up in a run-down section of Gotham under the thumb of a drug lord, Tom Paul Jussub. She then tasked them to clean up these four square blocks.

His straightforward approach not getting him anywhere, Savant reverted to his old MO. He used old blackmail material to get the block he’d been charged with cleaning up renovated. This forced the drug dealer to move to another area. Savant didn’t quite understand why Oracle felt he hadn’t fulfilled his task.

Despite Oracle’s acceptance of him, Black Canary retained a grudge she found she couldn’t get over. Thus, she arranged to meet Savant without Creote, challenging him to a rematch. After a tough fight she eventually beat him, seeming to come to terms with their history.

Savant and Creote were then recruited by Huntress while she was briefly estranged from Oracle. They acted as her enforcers while she made a move to become head of the Gotham Mafia, to gather information on the underworld. 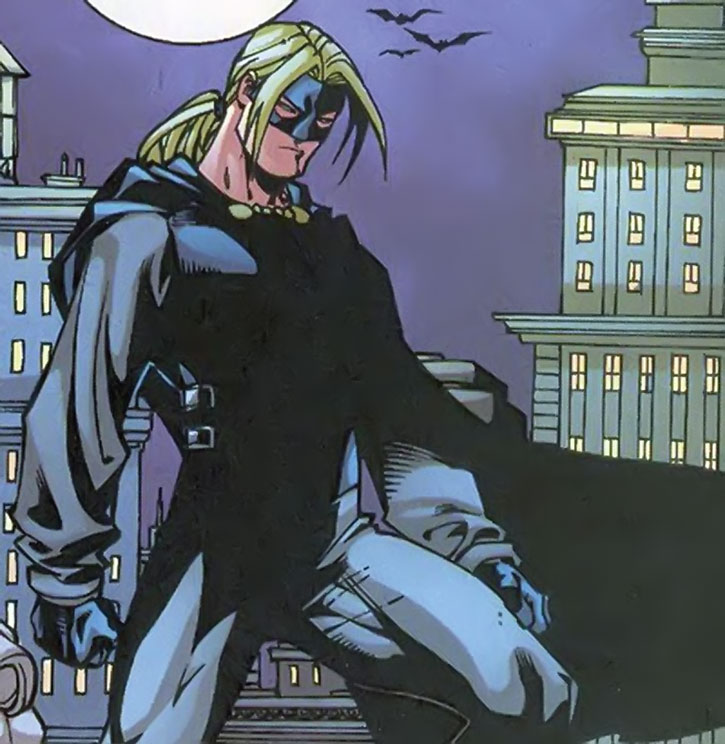 When the Calculator became obsessed with Oracle, he had a couple of Society members, Black Spider (Derrick Coe) and Hellhound (Jack Chifford), kidnap and torture Savant. His non-linear memory made it difficult for them to get anywhere. Yet they continued, holding him as bait. As expected, the Birds of Prey, and Creote, found where he was being held, and attacked.

Savant was freed, but, enraged, threw Black Spider through a high window. Black Spider survived the fall, but as they tried to get him to a hospital, the group were attacked by Deathstroke. Surviving the encounter, Savant ended his association with Oracle.

Creote continued working with for Oracle on occasion. As to Savant, he was among those who gathered to support Oracle when Spy Smasher II tried to usurp her.

Coldly efficient, if sometimes confused, Savant appears to genuinely want to do good. Yet he doesn’t quite understand how to do so. He focuses on his eventual goal but forgets the reason for trying to achieve it. Examples include punishing arsonists rather than trying to rescue their victims; or cleaning up a neighbourhood by relocating a drug dealer rather than closing him down.

He can hold grudges. Yet when he finally had the better of Oracle, his better nature took over and he helped keep her secret and freed her.

A chemical imbalance leaves Savant with a non-linear memory. He’s unable to accurately judge the passing of time, or to place his memories in order.

If deprived of his medication, he will experience severe conditions such as:

Creote has said that when Savant hurts someone, he experiences emotions much as a child does. Elation, satisfaction, euphoria, realization, remorse.

Durlin has a strong bond with Creote, whom he relies upon to handle his illness. Yet he appears unaware of the true depth of Creote’s feelings for him.

It’s been suggested that his penchant for blackmailing powerful men is a way of getting back at his father for disinheriting him.

“Well, well, well, Miss Lance, is it ? Aren’t you just a picture of feminine sexual iconography !”

[Hallucinating his first encounter with Batman]
Batman: “You’re not morally equipped for this job. Your presence will not be tolerated.”
Savant: “You’re not… I am 90% certain that you’re not actually here at this time.”

Savant: “I was going to be a superhero, Creote. This is the city for that, you know.”
Creote: “Yes.”
Savant: “I met the Batman last night.”
Creote: “It was four years ago, Savant. Have you taken your medication today ?”

“Do you think because I know which wine to order with trout, I won’t slit your throat ? The only reason I don’t kill you right this moment is that I’m not absolutely positive I didn’t do it already.”

[Trying to infiltrate a drug house]
Savant: “Hello ! We wish to purchase illegal drugs, please !”
Doorman: “Silencio, tolo !”
Savant: “Ah, Portuguese. Good.” (switches to Portuguese) “My friend and I are new to the neighbourhood, and would like to purchase many illegal narcotics. Please tell us the location of your kingpin, Mr. Tom Paul Jussub. Thank you, my good fellow.”

While he had his blackmail files, Savant effectively had Omni-Connection.

The Gadgetry and Medicine are based on reasonable claims by Savant. But there’s no on-screen evidence to support them.