Scalphunter is a terrible killing machine. He employs a full bodysuit of various weapon pieces which he quickly may assemble (and take apart) into any sort of offensive weapon : machinegun, micro-missile launcher, flamethrower, two-handed sword and so on. Being a former military man he knows many military skills and the art of unarmed combat.

Scalphunter is also an able leader and tactician. His orders are only overruled by Malice or Sinister himself.

All the Marauders are also supposed to have superhuman mutant powers. However, Scalphunter has so far not clearly exhibited any. It would seems that it is his aggressiveness, martial skills and his peak physical abilities that are his real mutant power.

It is known that the Marvel Universe has many non-superhuman mutants whose only power is extreme talent for some craft. Scalphunter could thus be an abnormally powerful example of that strain of mutant.

Scalphunter’s attitude probably originates from a military or mercenary background. He first appeared as the commander of the Marauders, sent by Sinister, during the slaughter of the Morlocks.

Later, he led a failed assassination attempt against Madelyne Pryor. It is evident that all the current Marauders are clones from the original ones (created by Sinister) who already have died in combat.

Scalphunter is still at large as a Marauder being employed by Sinister for various killing missions.

Scalphunter looks like a hunter. His entire body except the head and left arm is covered with various weapon pieces. These can be attached into any weapon configuration by his quick hands. The weapon parts look metallic and makes him appear really tough. He has purple hair, purple eyes and a purple mustache.

Scalp also wears a metal collar around his neck and two metal armbands around his left arm. Lastly he wears a pair of gray boots, a pocket belt and a holster. He is usually seen around with a nasty grin on his face ready to kill the next victim.

Scalp is clearly the leader and apparently also one of the most powerful of the Marauders.

Scalphunter is the most cold-blooded killer of the group of the Marauders. His objective is always to kill his target, and he will always make certain that he has enough force on hand to achieve this objective. Clearly Scalp studies the opponents of his next mission very carefully until he knows their strengths and weaknesses.

Scalphunter is loyal to Sinister. He really enjoys working with the Marauders as their tactical commander in combat situations.

He usually talks down on his victims, and points out that he as a mutant is killing his own kind, before killing them and enjoys giving out orders. All Marauders do care about rescuing their teammates in combat, but may mock each other for the smallest failures.

He appears to talk in a southern accent and always moves fast.

Scalphunter is fond of his teammate Arclight and the two are lovers.

“No hard feelings. Nothing personal. It’s our job. We’re pros. The best. Marauders !”

Scalphunter is a mutant assassin (how many are there really ?). He could probably be employed as an assassin for hunting down metahumans, together with the other Marauders, under the services of a mysterious and powerful villain such as Darkseid.

Making Scalphunter hunt metahumans of course makes him a metahuman as he likes to hunt his own kind.

The nice thing is that the Marauders can return even after their apparent demise as Sinister readily clones new ones; Marauders that again are ready for new tasks.

Using his suspected mutation, Scalphunter can very quickly assemble a very wide array of weapons from parts that he carries on his costume (Fabricate). Non-standard, more powerful or exotic weapons are paid for using HPs and his Omni-Weapons. The weapons that Scalphunter always has access to (using Fabricate) are found below. Note that he seems to prefer the heavier ones.

Although he has really has access to extremely many different weapons, the types found below are his typical choices (note that many common weapons have the same stats as the ones found below):

Scalphunter may use any type of ammunition with his firearms (see the many details under new rules), but the GM may charge HPs for using non-standard bullets. He is also likely to have access to various firearm gadgets, such as scopes, underbarrel lights, silencers, laser sights, red dot sights and extended magazines.

Scalphunter on his way to a mission

Like a true professional, Scalphunter carefully studies his prey before each mission (using Research). Having access to Sinister’s database of mutants, he carefully determines his opponent’s strengths and weaknesses. As he then leaves on the mission (usually extermination) he brings suitable weapons to defeat that opponent.

In game terms, Scalphunter has already built the the most suitable weapon for that victim when they meet and has it handy for use. Additionally, Scalphunter benefits from his Expertise (His next prey) trying to answer any question pertaining the victim’s habits, hometown etc. 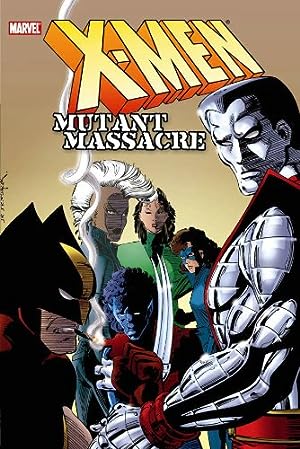 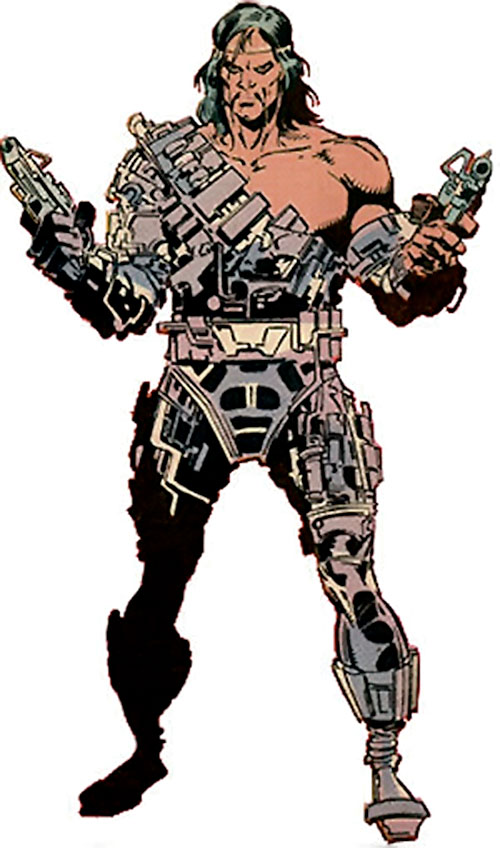 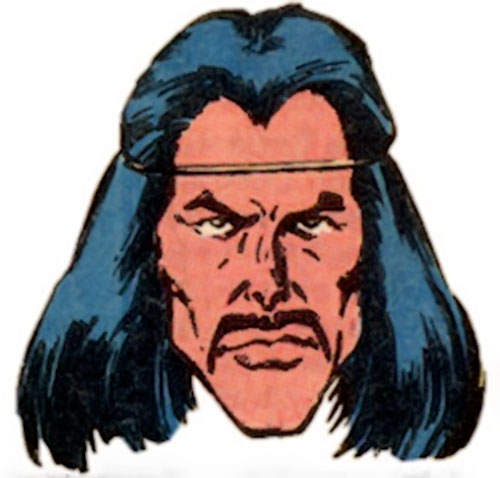 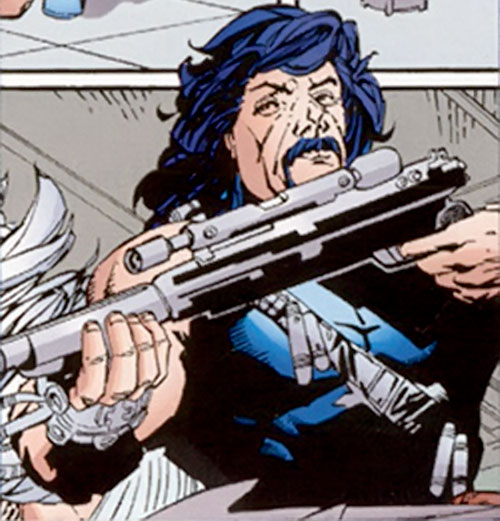