Scanner is one of the Acolytes of Magneto. If you don’t know much about these guys, we suggest you first read our character profiles for Joanna Cargill.

Scanner can become intangible and fly around undetected. Her intangible form is somewhere between an astral  form similar to those used by some telepaths (such as Professor X) and a harmless energy form.

Thus, she usually serves as a messenger or as reconnaissance.

She cannot touch the real world in this form. But she learned to make her form visible and audible – and later on material-looking.

By 1999 she had learned to disrupt bio-electricity with a touch, shocking living beings. This worked even against Professor X’s astral form. However, it is possible that this shocking touch only works against astral bodies.

She can also use her radio while intangible – as well as a tracker allowing other Acolytes with radios to home in onto her. If she has video equipment, it can also broadcast.

Scanner can project her quasi-astral (once called “electro-transitional”, and sometimes “bioelectric”) form for as long as needed. It is possible that this form is a secondary mutation of hers, and that her initial powers were more about detection.

Scanner can mentally detect persons through obstacles, at a range beyond her ordinary senses. This ability was seen but twice. She could count the number of discrete signatures, get a crude sense of their power level and seemed to get a sense of whether they were Acolytes.

It might be a way to very quickly sweep a zone with her intangible form, leaving her only time to perceive sapient  minds.

Scanner was taught serviceable hand-to-hand combat and piloting skills, possibly by the Acolytes.

Officially, Scanner is the same person as the Acolyte of Magneto called Screener. This isn’t convincing – see our Screener character profile for more.

Sarah “Scanner” Ryall was among the second batch of recruits of the Acolytes of Magneto. Those are a militant cult worshipping Magneto (Max Eisenhardt) and his teachings. This mutant supremacist organisation was active throughout the 1990s.

About a year after Scanner joined, Magneto was rendered comatose by Professor Charles Xavier to protect the Earth.

The faith of the Acolytes was abused by Fabian Cortez, who had strong-armed Magneto into creating the Acolytes in the first place. It was also manipulated by Exodus (Bennett du Paris) who presented himself as Magneto’s herald. The two men often feuded to take full control of the Acolytes.

In 1995, the Avalon space station built by Magneto was wrecked in a fight between the extra-dimensional Holocaust and Exodus. Scanner was among the small group of Acolytes that Cyclops (Scott Summers) saved from certain death there. She faithfully obeyed Summers’ orders during the whole ordeal.

After the reentry and the crash, Scanner was instrumental in helping Cyclops locate a safe haven after a lengthy trek across the Australian outback. 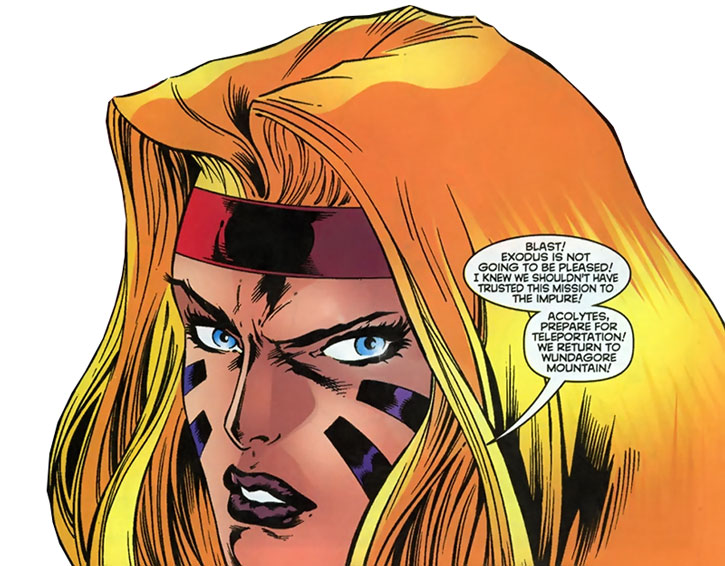 After this episode Scanner was interested in joining the X-Men and find a better place where she could finally belong. However, the blood on her hands made that impossible. She and her fellow Acolytes surrendered to the police at Professor Xavier’s behest – only to quickly escape.

Scanner then joined the Andean splinter of the Acolytes. This was a small mutant community living in hiding in South America near one of the Avalon crash sites. These soon drew the attention of anti-mutant activist Larry Trask, who sent special military units after them.

The Acolytes were saved by the arrival of “Joseph”, whom they thought was Magneto reborn. Scanner was particularly eager to believe that Joseph was Magneto.

Joseph disbanded the Acolytes, but Exodus swiftly reactivated the organisation. Scanner and Unuscione were among those who immediately rejoined, and at Cargill’s suggestion they approached Colossus (Piotr Rasputin) to convince him to rejoin. Scanner may have been selected because she was on good terms with Colossus, who had been an Acolyte for several months.

However, Rasputin not only turned the offer down but nearly convinced Ryall to abandon the Acolytes, until Unuscione grabbed her and left.

In 1997, Exodus declared war against the High Evolutionary. His chief goal seemed to be control of the Mount Wundagore science citadel. However, he sold this to the Acolytes as a war against a man declaring himself master of the phenomenon behind mutants. 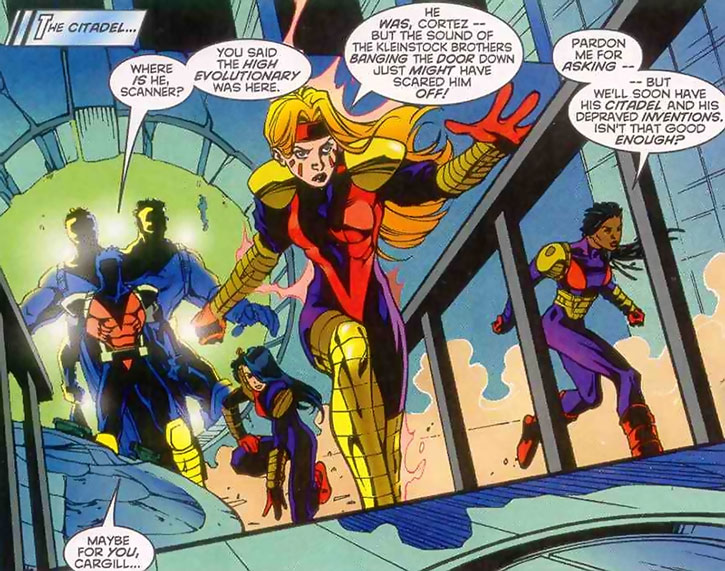 Scanner acted as an emissary to deliver terms, then as a scout during the battle. Mount Wundagore was taken but the High Evolutionary and a cadre of his Knights fled. Scanner served as a NCO for the large team of Acolytes and mutant allies sent after them. She also seemed to be Exodus’ aide.

In the end, the intervention of the Heroes for Hire allowed the High Evolutionary to prevail.

The master of magnetism returns

In 1999, Magneto returned and the Acolytes flocked to him. He sent them on a series of violent raids to facilitate his ultimatum to the UN – demanding that a mutant sanctuary be created under his leadership.

The X-Men gave chase to a crew of Acolytes led by Scanner, but the mutant heroes’ jet was downed in the Arctic by an electromagnetic pulse. Scanner was reluctant to just let them die in the cold, as she remembered how the X-Men had saved her from the destruction of Avalon.

Professor X then telepathically augmented the Acolytes’ aggression so as to lure them closer to the crash site. As he saw it, the X-Men’s only hope of survival was to capture the Acolyte’s aircraft.

The X-Men prevailed against Magneto, but the mutant master of magnetism had nonetheless been granted rulership over the war-torn island of Genosha. This was a divisive event among Acolytes, but after briefly leaving the aimless Scanner enlisted with the new Genoshan military.

As a soldier, Scanner was worn by the brutal civil war as she and other Magneto operatives forced the factions to surrender. Eventually, only one rebel area remained in the Carrion Cove village. Scanner’s morale took a hit after she lost 25 human comrades in an ambush. She then discovered that it had been set by rogue Acolytes. 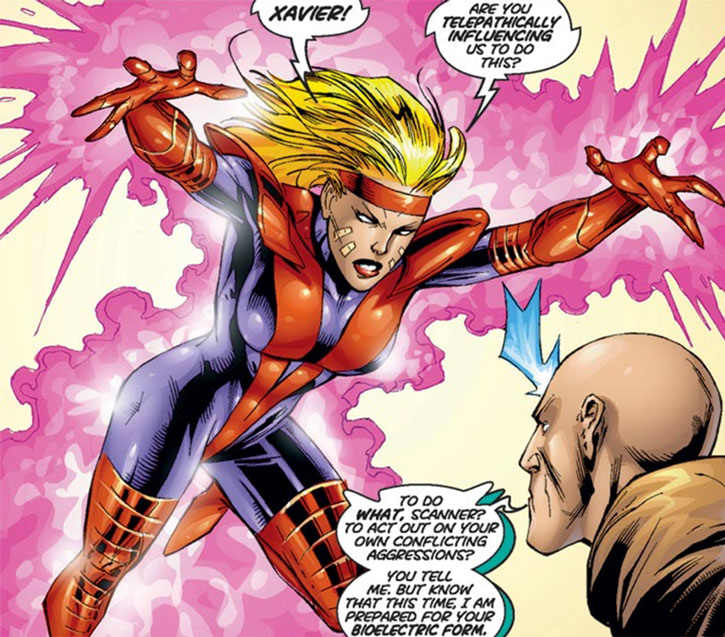 Despite interference from the Avengers and the fluid loyalties of many members of Magneto’s cabinet, Carrion Cove was conquered by the government. Magneto found the McGuffin that many were eager to deny him — a unique mutant enhancement technology — and used it to greatly augment his powers, chasing away all opponents.

Scanner, who had spent much of the battle as an air reconnaissance asset, was thus on the winning side as the reconstruction of Genosha resumed.

She was never seen again. Since the islands were later ravaged by a massive Sentinels strike arranged by the evil Cassandra Nova, it is possible that Scanner was slain during this catastrophe.

The patterns on Scanner’s face change from time to time, so they’re presumably warpaint.

She usually wears a headband.

Scanner is one of the few Acolytes of Magneto using a code name.

Ryall can make her eyes go completely white when using her powers.

Initially Scanner was hesitant, and was grossed out by the massacres conducted by the Acolytes.

Cortez and Exodus continued indoctrinating her to make her a true believer, and she became eager to carry out the Acolytes’ work.

Unlike some other members she remained more pro-mutants than anti-humans, and she seldom became as brutal as many of her allies.

Ryall seems to have a need to follow a powerful, charismatic mutant leader. She feels visibly better when she can unquestioningly obey, but finds it hard to let go of her doubts. When she had to operate with Cyclops, she was eager to do her best for him and was visibly impressed by his leadership and confidence.

She also seemed to like the big-brotherly Colossus, and almost admired the Avengers for their dedication to saving innocents (though most weren’t mutants).

In the field Scanner acts courageously and is fairly competent. But when it comes to her dedication to the cause she seems naïve and idealistic, contrasting with the murderous violence often dealt by the Acolytes. She seemed bitter that she had been denied an opportunity to join the X-Men, forcing her back to the Acolytes.

While working closely with Exodus, she adopted his belief system about racial purity, with superhuman mutants being top of the heap and everybody else (including those mutants sick with the Legacy Virus) being disposable untermenschen. This faded away after she stopped closely associating with him.

“I am Scanner, an acolyte of the fallen messiah Magneto. I bring you a message from Exodus, the heir of Magnus. Wundagore is sacred to our people ; your presence profanes our holy place.”

“We can all contribute something to Exodus’ New Avalon – and make tomorrow a better day for our mutant brothers and sisters !”

“This is a killing mission. Exodus has decreed the High Evolutionary’s death for creating artificial mutations like the Knights of Wundagore.”

Connections:
Acolytes of Magneto (Low), and potentially a Low Connection with Colossus. 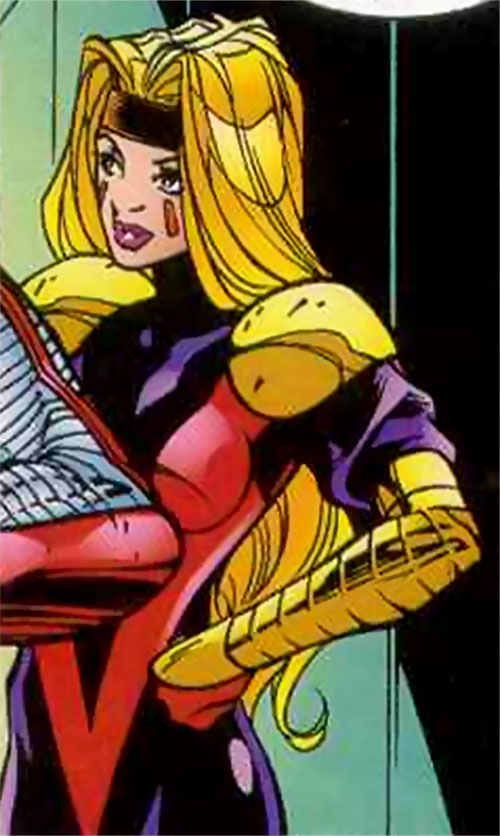 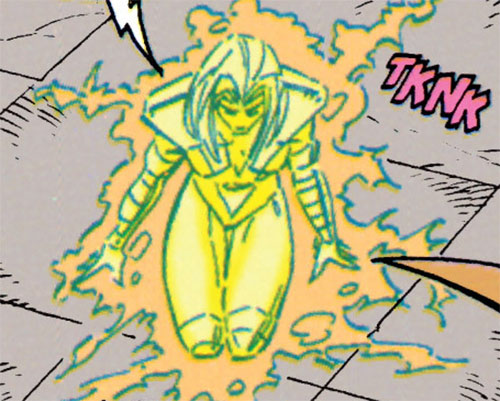