A Snark, Scanner has a powerful tail which he makes use of in combat, preferring to fight in close-quarters.

He is also a highly talented tracker, which is enhanced by his radar sense, and a good pilot and navigator.

A Snark mercenary, Scanner was recruited into Force by Interface. He acts as their pilot and navigator.

When Interface learned of a sacred shield which supposedly bestowed great power on its wielder, he led Force on a search for the shield. The computer that runs the world where the shield was found, Main Frame, forced them to compete against another team that had been searching for the shield, the Guardians of the Galaxy.

Scanner faced off against Nikki. While he had the advantage in close combat, she put distance between them, trying to catch him in an ambush. His powers warned him of her location, but she still managed to catch him in a landslide, rendering him helpless. She was about to finish him off, when the contest was deemed over, and they were teleported away.

With the other contests resulting in draws, the final contest came down to Interface versus Vance Astro. Interface easily subdued Astro, but when he seized the shield, he didn’t understand that its power was symbolic, and was so caught up in trying to access the power that Astro managed to take it away from him.

Losing due to his motives rather than the contest, Interface, Force, and their ship were teleported 15 parsecs (1 parsec = 3.26 light years) away by Mainframe. Seeing no benefit in returning to challenge Mainframe or the Guardians, Interface ordered them to move on to other possibilities.

When Force were attacked by Malevolence, their resistance was easily dispatched. The one exception was Brahl, who happily made a deal with Malevolence. She declared them her slaves, using her power to keep them in line, and assigning Brahl as their new leader.

Malevolence led them to Homeworld, centre of the Universal Church of Truth. She demanded the role of matriarch to Protégé. When Malevolence sensed the Guardians and her main rival Aleta, she dispatched Force to delay them. Force attacked the Guardians on board their vessel. Scanner again faced off against Nikki, but this time he got the better of her.

Martinex convinced Interface to call a truce, forcing Scanner to let Nikki live. Brahl fled to tell Malevolence of their treachery. Joining forces, Force and the Guardians travelled to Homeworld to confront Malevolence. She convinced Protégé that they were coming to harm him. Thus, he dispatched his elite guards, forcing them to use their powers in his presence.

The battle was stopped when Starhawk reabsorbed Aleta and left, allowing Malevolence to win by default. Force and the Guardians were both spared when the Guardian, Replica, herself a Universalite, begged Protégé for their lives. He acceded, banishing them from Homeworld.

Aggressive and overconfident, Scanner trusts in his powers to warn him of any surprises. He’s a ruthless fighter, who doesn’t hold back in combat. 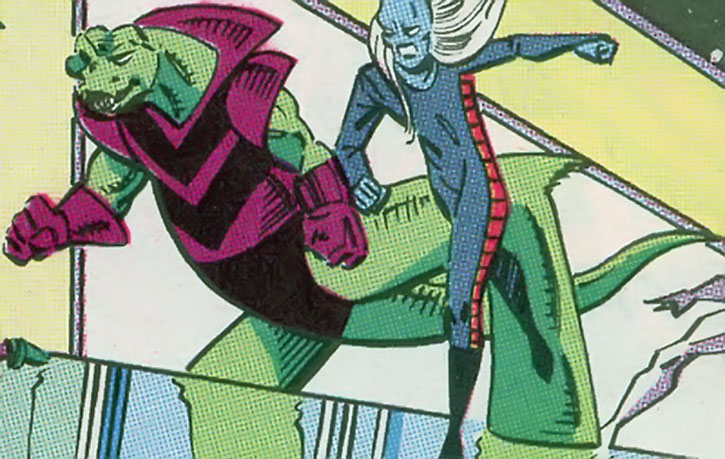 “Foolish mammal. You cannot escape me ! I am called Scanner, scaleless one. Mine is the power to track any living being.”

“Fatal error, mammal ! Never turn your back on an opponent — especially if he has a tail !”