In addition to the normal Morituri physical enhancements, Scanner had “psychic omniscience.” At first he thought he merely had vastly enhanced sight and hearing, but in time he realized his powers were psychic in nature and had nothing to do with his actual senses.

Though he did not seem to be as physically powerful as the other Morituri, he was faster and more agile than most. He also seemed to be a superior hand-to-hand fighter, though where that skill came from was never explained.

Dan Baker was an ordinary computer programmer until a Horde meteor strike wiped out his home, his finance, and their unborn child. Finding himself eligible for the Process, he volunteered seeing it as a “long suicide.”

However, being Morituri and the wonder of his new powers seemed to snap him out of his depression. Though his fellow teammate Revenge was responsible for the cure that allowed Scanner to evade the Morituri Effect, it was Scanner’s powers that ultimately made him perhaps the most important Morituri ever.

During the cold war, an American military computer developed sentience and began working to improve the conditions of the world. It was responsible for establishing the world government and bringing the Earth’s people together.

However, several years into the Horde war it became aware of another force working in opposition to it. This turned out to be the VXX 199, the aliens summoned by the signaling device Dr. Tuolema activated. Their enormous ship was essentially one giant biological computer and it began working to mold human society into the direction the VXX wanted.

The earth AI found that it was able to communicate with Scanner through the bio-chip in this brain. Taking the form of Scatterbrain, the computer attempted to warn Scanner about the new aliens and the assassination plot. But it was insufficiently skilled at the process to do more than give a partial warning. It was years before the AI was able to communicate freely with Scanner.

Sensor only participated in one actual engagement against the Horde.

After the war ended, he was swept up in the attempt for rogue elements in the government to seize power. Avoiding several assassination attempts, they were able to capture the head of the conspiracy, but not before the Prime Minister was killed. The revelation of the attempted coup destroyed the world government, exactly as the VXX 199 had planned.

Scanner and Burner fell in love and were married after the war. They had two children and he went to work as a private investigator.

(This writeup is for Scanner as of the end of the regular series, not as he was 10 years later in the Electric Undertow limited series.)

Scanner was a medium-sized man with a slim, athletic build and short brown hair. He wore golden armor with a helmet.

Initially dour and depressed, Scanner soon came out of his shell and developed into the leader of the remaining Morituri. It was some time before he was fully proficient with his powers, and he was initially unsure how to respond to the partial warning he received from earth’s AI. Only after the first assassination attempt on his team did he finally realize what was happening.

Even after his depression lifted, Scanner still remained somewhat introverted with a tendency to keep things to himself until he was absolutely sure of the correct response.

Shear: “I’m curious how a guy with enhanced sight and hearing is going to be any use to us ?!”
Scanner: “18.”
Shear: “Huh ? What ?”
Scanner: “That’s how many Horde ships I can see in orbit over this hemisphere. And now you better follow me. Commander Pogorelich is about to sound the klaxon.”

Bonuses and Limitations:
Radio Communication is via a bio-chip in his brain and only allows access to computer networks (-1). 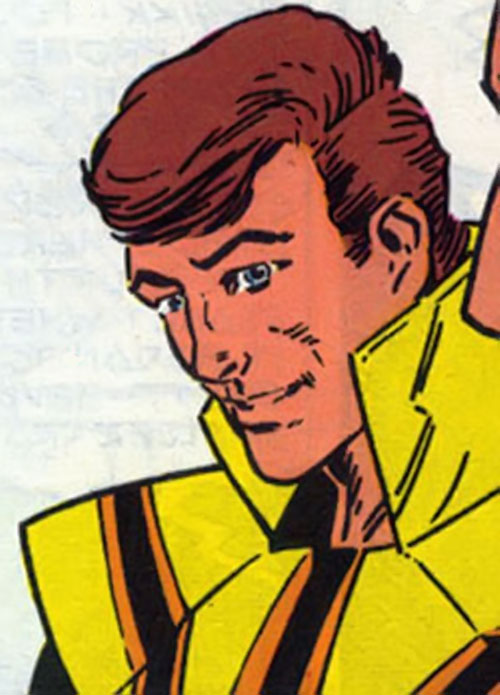