Scar is a scary psycho-killer. He’s remarkably strong and an excellent killer with his bare hands or a variety of weapons.

For the police, he’s a deadly opponent. But his low Hero Points  do not make him a match for most super-heroes. He can still be a serious threat for beginning characters, though.

Brian Lash is the psychotic son of “Loop” Lash. This old-timer criminal and a friend of Walter Hardy – the father of Felicia Hardy. When Felicia Hardy started her activities as the Black Cat, she ran one early operation (taking control of an armoured truck to rob its money) with Loop’s son.

That was a mistake.Brian proved to be uncontrollably violent, and wanted to kill the guard inside the truck after he saw them. That was a grave violation of his agreement with Felicia (no killing) and the young woman tried to stop him by hitting him in the face.

At that point she had started experimenting with clawed gloves. Her lack of experience with that weapon meant she took out one of Brian’s eyes and badly scarred his face. Yet that did not prevent Brian from killing the guard and robbing the money.

They fled separately. Felicia took to the rooftops while Brian ran in a subway tunnel with the police in hot pursuit. Brian was hit by a train and put into a coma for several years. Felicia escaped, but renounced the clawed gloves for a while.

When Brian emerged from his coma, he was even more of a psycho. And he was consumed by a need for revenge against the Black Cat. Awakening silently, he killed police officers guarding his room and escaped. Once on the streets, he created the identity of Scar the Stalker and began hunting the Black Cat down. News of his escape soon reached both the Black Cat and Loop.

Scar eventually found Black Cat while she was at Paul Proust’s house. Scar shot Black Cat with a poisoned quarrel and, assuming Proust was her current lover, captured him as an hostage. He let the unconscious Black Cat hanging from a high spire on top of a building. Then Scar returned to the site of their failed armoured truck attack.

The Black Cat guessed this would be the site of their clash due to Scar’s obsessive nature. He ran a gauntlet of trap in the warehouse – remote controlled armoured trucks, remote-controlled truck-loading equipment, explosive, incendiaries, etc.. When she reached Scar, the psychotic criminal defenestrated Proust and attacked the Cat.

He had, however, underestimated Ms. Hardy. She was tougher and much better equipped than she was before he went into a coma. She eventually defeated him.

Meanwhile, Spider-Man (Peter Parker) came in and prevented Proust from falling to his death. He then talked Felicia out of killing Scar. Spidey took the killer to the police instead.

A super-violent, raging psycho who thinks he’s the Warlord. He obsesses over his vengeance and really, really likes killing.

He could have been inspired by the Predator (Carol Ferris). 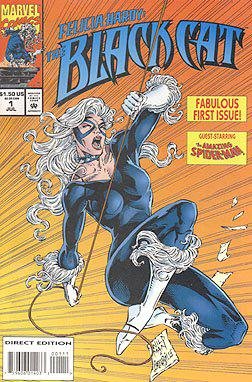