Scarab appeared in 1993, early during the Vertigo imprint’s existence. That means the days of The Sandman, Doom Patrol, Shade and other genre-defining books. The Scarab was created and written by John Smith, best known for his 2000AD work.

The series wasn’t commercially successful and soon keeled over, but it had potential. Therefore, character profile for the Scarab. On the other hand most everything was Terribly Mysterious And Unexplained, which the series getting cut short aggravated. Therefore, this profile involves a lot of guesswork.

The History section is light on S P O I L E R S. But there still are some.

The Scarab is most of the time a flying, two fisted mid-level brick . He usually relies on brute strength.

Howbeit, his preternatural intuition and sensitivity play a strong role in his modus operandi. These allow him to feel disturbances and distress. Perhaps due to his connection with the unreal, the Scarab just gets the weird and the incomprehensible, though it took Louis some time to reacclimatise himself to this form of intuition.

In DC Heroes RPG terms, these are the WIL score and the Surreal Sensitivity Advantage.

The Scarab’s use of sorcery is rarer. It most often manifests as Dimension Travel into the aethyr. But he’s also been known to shoot eldritch bolts, hurl lightning bolts, and to teleport an opponent in front of a nearby jumbo jet reactor.

The Scarabeus that empowers the Scarab is related to the ancient Egyptian god Khepri, and might in fact be Khepri. This scarab god is the divinity of rebirth and the solar cycles. He was later absorbed by the sun god Ra, who took over his portfolio.

Louis Sendak was born in 1914, a normal country kid in Staten island. When he was eight or so, his father, whom he took to calling “Bluebeard”, brought home a mystical green door. It was a portal to something called the Labyrinth. “Bluebeard” set it just like a normal door in the house.

Louis’ father would disappear for weeks or months into the dimension behind the door, bare-chested and toting strange weapons. He would then bring back exotic gifts from faraway lands.

Despite this weirdness, Louis lived a normal life. He met his future wife, Eleanor, at the New Year’s Eve street party in Times Square. His father disappeared or died in the late 1930s. Louis and Eleanor then came to live in Louis’ ancestral house.

On October the 6th, 1941, while President Roosevelt  was uttering his historical speech on the radio, Louis, led by his dreams, found something among his father’s souvenirs in the attic. It was a mystical talisman known as the Scarabeus, which turned him into the wartime super-hero known as the Scarab. 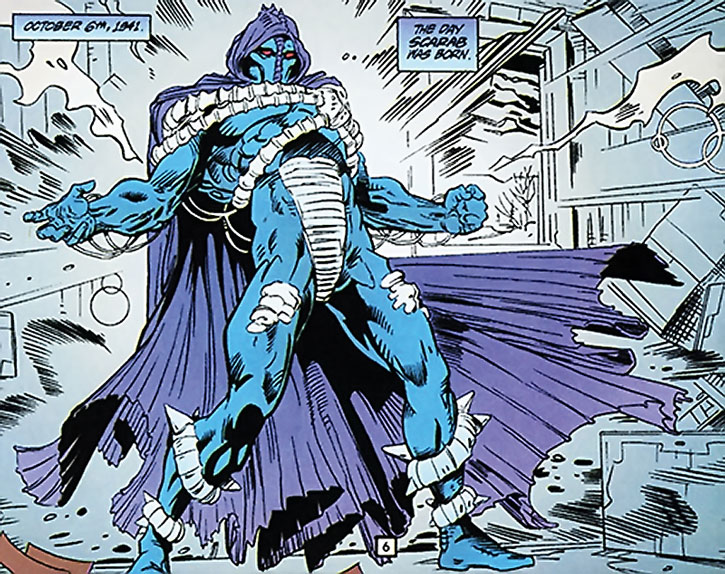 The Scarab’s career lasted until early 1944. Of that time, he remembers “patrolling the borderlands between the real and the imaginary ; between the physical and astral planes”. He fought along with the likes of Doctor Fate or Sargon the Sorcerer, foiling numerous surreal menaces of otherdimensional and/or Axis origin.

The Phantom Stranger once commented on this period of Sendak’s life, saying that the Scarab was one of the greatest, most fearless heroes of the Golden Age.

What happened in 1944 is unclear. Sendak dimly remember flying up the Loire  and then heading for some kind of hotel in Paris, then “broken bodies, blood and jackboots. Women screaming. Cooked flesh tangled in bedsprings”. Whatever happened almost destroyed the Scarab’s mind, leaving him delirious and laid up in bed for more than six months.

When he recovered, his loving wife was begging him to let go of the Scarab, to have a normal life and a baby. Although Louis was hesitant, he would probably have complied. However, the green door to the Labyrinth opened, and Eleanor walked in — or was pulled in.

The door then slammed shut, and would not open for 50 years, despite everything the powerful Scarab attempted to open it.

The Labyrinth of doors

The Labyrinth is what lies behind the green door in Sendak’s home – a door Sendak can now easily open. It is a maze dimension filled with an immense number of doors in all shapes and size, opening on rooms filled with… anything. Rooms of trees and empty bird cages. Sculptures of masks and chandeliers. Giant thundering engines. Shoes and typewriters and TV sets tuned to dead channels.

The ultimate role of the Labyrinth is still unrevealed. It has something to do with the skin of the world between the real and the unreal. It might in fact be that skin, or at least a view of it. It is known that Eleanor ultimately ascended to become the mandala of the Labyrinth, and that Louis/Scarab is its minotaur.

What this entails exactly is unrevealed. Obviously, the symbols would suggest that Eleanor bears the sense of identity and universal meaning of the Labyrinth, and is the keeper of its purpose and sense. Whereas Louis is the monstrous guardian devouring trespassers, presumably to protect the unreal from the real and vice-versa. But things may not be that literal.

The loss of his beloved wife, and the trauma he had recently suffered, made Sendak abandon the Scarabeus until the mid-1990s. He still lived in the same house, checking the door 13, 20 times a day. Despite the stress, Mr. Sendak lived to see 78 – at which point he had become a battered, handicapped, bitter, elderly, lonely man.

At this point the door opened anew – and Sendak had to become the Scarab again.

One of the first effects the Scarabeus had on Sendak when it returned was to entirely repair and rejuvenate Louis’s aged, wrecked body. It thus turned him into a young man again and saved his life from the wounds inflicted by a mystical assassin. 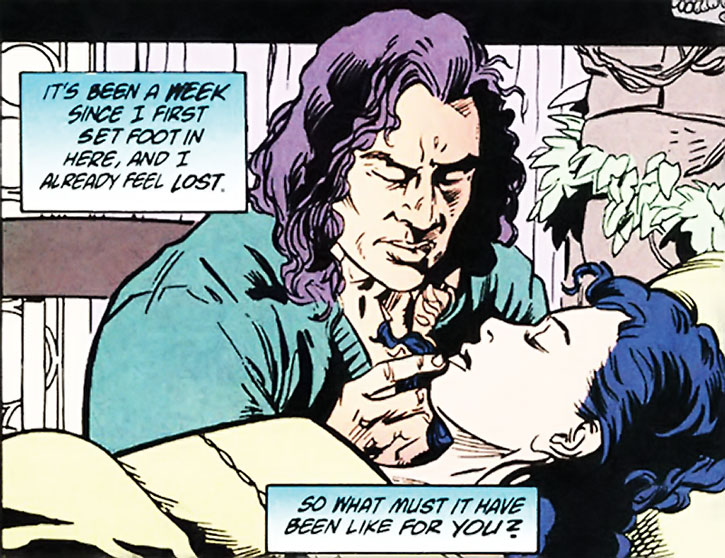 The renewed Scarab encountered menaces such as :

Beyond fighting to protect the real world from some weird and/or sick and/or mystical and/or demented menaces, Scarab was a major player in the reincarnation of Hector Hall, as well as his ascension to Dr. Fate. Howbeit, most details of the latter endeavour were not documented.

The Scarab sent the JSA on a quest to find Hall as he was about to be reincarnated, and held off Mordru as the sorcerer was attempting to kill all agents of Order and Chaos. The far more powerful Mordru ripped the Scarabeus off the Scarab’s chest, but Sendak is still alive and the world may not have seen the last of the Scarab.

The Scarab’s impressive frame radiates power and presence. He looks like a cross between a nightmare, Spawn and a legendary super-hero from a different time and planet. In the 1940s he wore a cape and cowl, apparently purple-coloured.

The Scarab often radiates a very low, buzzing, insect-like sound that is part-heard, part-felt, part-imagined. While his mouth is practically always shut (even when speaking) it can in rare occasions be opened, revealing glistening fangs.

The Scarab speaks as a “we”. This sometimes results in strange sentences – such as “Get away from our wife !”.

During the run of Scarab, Louis Sendak was rather confused due to amnesia. He also desperately worried over the fate of Eleanor. Furthermore, he found it difficult to reacclimatise himself to the weirdness surrounding him after decades of a small, mundane life.

Louis often felt that everyone but himself was aware of what was going on, as if there was some sort of joke everyone was playing at his expense. He could get quite violent and could kill, though that may have been due in part to the amnesia, confusion and anger.

From what little we’ve seen of Louis, after he made himself young again, he’s a nice, vibrant chap whose role is to protect humanity, save people and vanquish menaces.

He likes to act as a cinematic hero, but his resolve and toughness are certainly not an act. The restored Scarab can handle things like being impaled through the guts by a fast-growing artificial tree that is starting to grow inside him while being kissed to death by a repugnant, degenerate ex-angel and surrounded by men cut in monstrous shapes. It’s just another day for the Scarab !

“You’re nothing, angel. Just a cheap party trick. A scarecrow. A hollow man locked in his own sick little world.”

“It’s them. Not the women. The fetuses.”

“What are you saying ? We don’t understand what you are saying.”

Connections:
None he’s aware of.

Drawbacks:
Previously Age (Old), but this was fully reversed.

These stats assume that Louis has the usual competence for a Golden Age super-hero’s alter ego ; Louis hasn’t demonstrated any special Skills so far though. 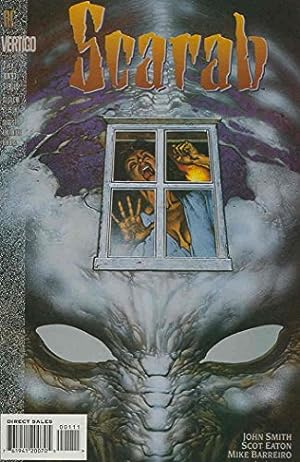 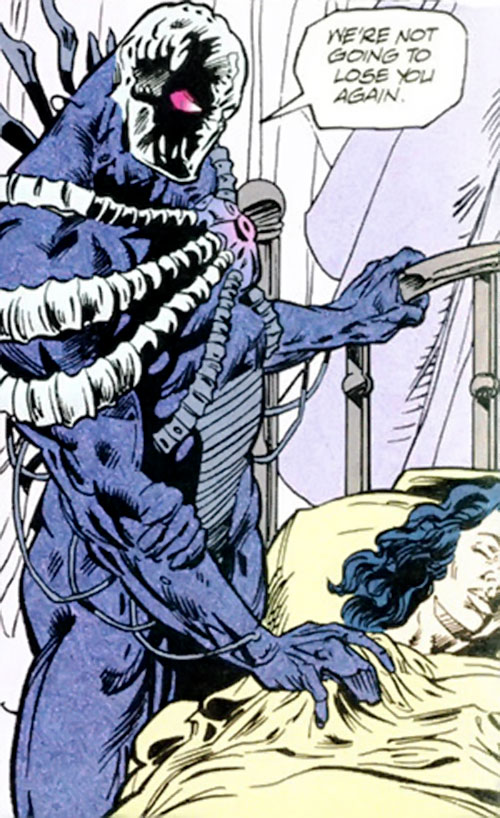 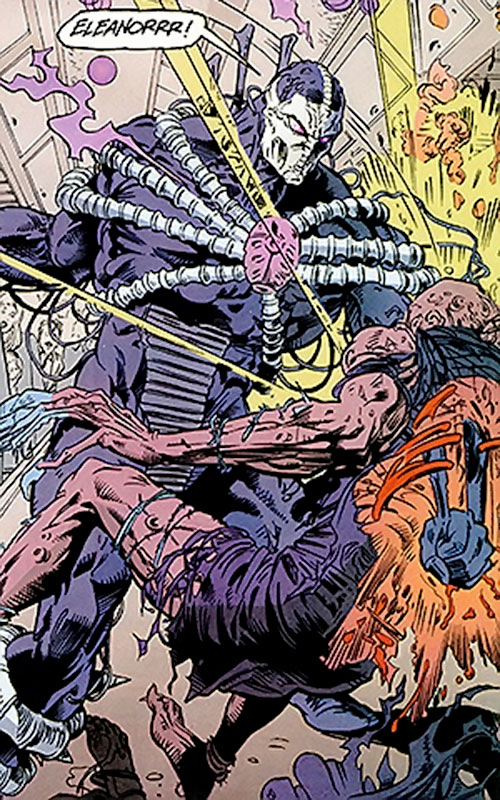 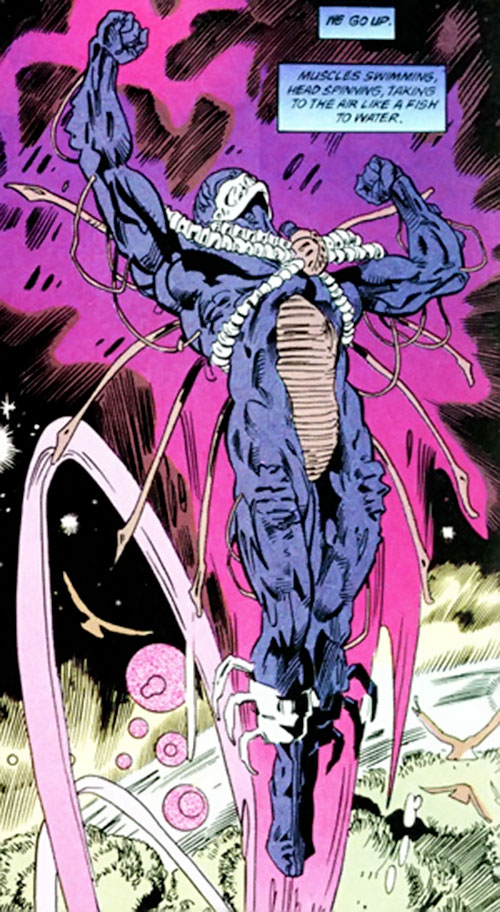 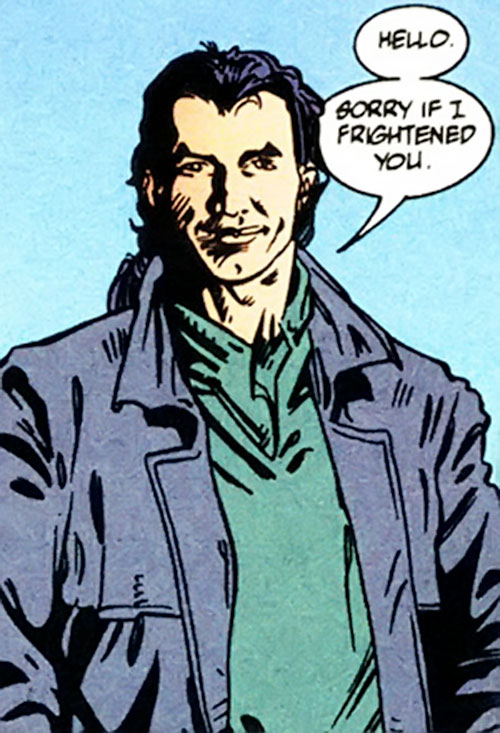