Mehemet is just a normal guy without his five inch long ruby scarab beetle. But he is pretty darn big, and fights well. I suspect he’s something of a two-fisted pulp fiction kind of archaeologist.

He showed some decent detective skills in tracking down the Eye of Horus, and of course has considerable expertise in Egyptian antiquities. He’s bright, but sometimes jumps to conclusions.

Wearing the ruby scarab, he’s a powerhouse. His strength and durability are on par with most modern bricks , allowing him to slug it out with Thor. He can fly at several hundred mph, and he wields powerful energy blasts. These can be projected from his hands or from the scarab at his throat.

Lastly, he can use the scarab to sap the strength of anyone he’s touching. This adds their power to his own.

Mehemet is the son of Abdul, who came into possession of a magical ruby scarab during World War II. As the Scarlet Scarab, Abdul used it as an isolationist champion of Egypt during the war and after, until one day the ruby vanished. Abdul spent the rest of his life searching for it, but in vain.

Mehemet did not learn of his father’s other identity until Abdul was on his deathbed. He bequeathed his son his legacy: to take up the quest for the magical jewel and recreate the identity of the Scarlet Scarab.

After years of searching, the nearly despondent Mehemet found the Scarab in the exact same place his father had originally found it. It was the tomb of the wizard Garret, who created it around 3500 B.C.E.. As it turned out an enchantment returned the Scarab there when it ran out of power. Apparently in the interim it had been found, and overused, by several others.

The ruby gave Mehemet the power to become the new Scarlet Scarab, Egypt’s unofficial new champion. Among his foremost goals was the protection of the priceless artifacts of ancient Egypt. 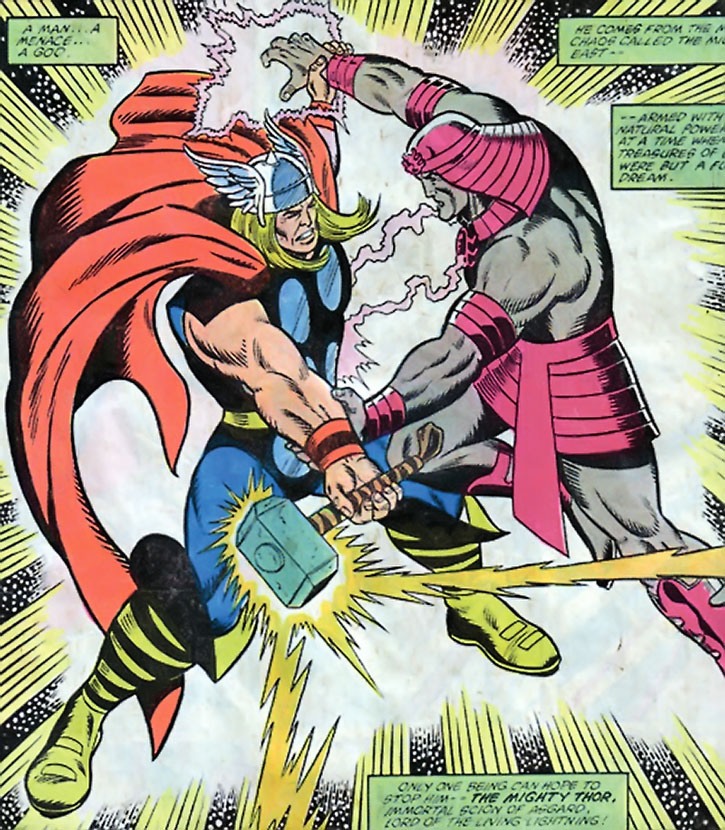 In his one recorded adventure, the Scarlet Scarab flew to the United States. He was looking for a statue recently stolen in Cairo, Egypt — the fabled Eye of Horus. He did not go through any official channels. That was because he suspected that some American museum or other was planning to buy the stolen artifact.

Tracking the thieves to Chicago, he began breaking into the various museums. He searched them by night and caused some damage in his frustrated search.

Thor was living in Chicago at the time. Thus, he set up an ambush with the help of the curator of the only museum which had not yet been searched. Their confrontation of the Scarab quickly led to a fight. The Scarab did not believe their assurances that they were not involved with the thieves.

This belongs to a museum

Thor convinced the Scarab to call a temporary truce so they would not destroy the museum. Thus, they resumed fighting outdoors. The Scarlet Scarab proved a capable opponent and slowly gained the upper hand as he drained the thunder god’s strength. But Thor won by calling down lightning to blast the ruby scarab from him, depowering Faoul.

Disarmed, Mehemet had no choice but to tell his story and listen in turn to Thor and the curator. Once they had achieved an understanding, Thor returned the scarab to Mehemet. The two then teamed up to find and capture the thieves and retrieve the Eye of Horus.

Each wished custody of both the idol and the criminals. The Scarab wanted the Eye immediately returned where it belonged, and the men taken back to Egypt for punishment. Thor countered that they criminals first must face trial in the U.S., and that the police would want to the idol as evidence.

Rather than renew their own conflict, Thor and the Scarab chose to compromise. The two parted respectfully. Thor arrested the thieves, promising they would then be extradited to Egypt, and the Scarab went home with the Eye of Horus.

The Scarab is a big, muscular man wearing what looks like ancient Egyptian garb, all in red. He sports sandals which come up to his knees, a loincloth, armbands, and a headdress. He wears the ruby scarab at his throat, and a replica of it at his brow.

The Scarab is determined to the point of obsession. He spent years traveling the globe trying to fulfill his father’s deathbed wish by finding the lost ruby Scarab. And now he is striving to live up to his father’s somewhat dubious legacy.

It’s unlikely he’s had much time for a life of his own. It’s possible that he resents his father as much as he obviously reveres him. This may be at the root of much of the Scarab’s anger, because the Scarab is obviously an angry sort.

He ignores little things like talking with officials or other heroes, jumps to conclusions, and is quick to resort to force and threats in pursuit of his goals.

Still, he’s not completely unreasonable. With some prompting, he agreed to a temporary truce with Thor in order to move their battle away from innocents. Once Mehemet had been convinced that Thor wasn’t a criminal or interested in plundering Egyptian treasures, they worked together fairly well.

He may have learned something from that encounter, as at the end he is willing to give up custody of the thieves, trusting to Thor’s word that they would be appropriately punished.

“Let no man stand in the path of the Scarlet Scarab !”

“You dare accuse me of theft ?! Your kind has systematically looted the treasures of Egypt for centuries – and you dare call me a thief ?!”

“The ruby absorbs the power of whosoever opposes its wearer forcing you now to face a single, stark, inevitable truth NO ONE can defeat the SCARLET SCARAB – not even YOU !”

The ruby scarab has obvious similarities to the artifact used by Daniel Garrett, the original Blue Beetle. Meta-fictionally, the homage is explicit — the scarab was created by the ancient wizard Garret and the ancient warrior Dann.

In the DCU, the wizard who created the scarab might have been either Nabu or Shazam. The warrior who helped might have been Black Adam or Prince Khufu. There might also be a connection with Sargon the Sorcerer’s Ruby of Life, and the Ring of Life tied to it – perhaps the ruby scarab is any attempt to combine the magics of the blue beetle and the Ruby of Life.

The first Scarlet Scarab would have clashed with the 1940s Seven Soldiers of Victory. Or some of the 1940s Freedom Fighters. Or any contingent of the All-Star Squadron’s non-mystical members – those not affected by the Spear of Destiny.

Mehemet’s encounter with Thor would instead be with Captain Marvel in Fawcett City. (Hah, thought I was gonna suggest Superman, didn’t you! That’d work too.)

Supposedly, when temporarily drained of Power, the ruby scarab teleports back to its ancient resting place to recharge. This is probably just a Power Complication Subplot that comes up every few years.

If you wish to represent this mechanically, then anytime a Power or Attribute of the scarab is reduced to 0 (by a failed Push attempt, a Neutralize or Power Drain attack, etc.), it teleports back to its tomb. It is considered to have 23 APs of Teleport for this purpose, and likely has some Dimension Travel as well.

Note that the user of the scarab does NOT teleport with it. In fact the ruby seems to teleport when it’s not being worn – the user may not even known it’s gone until the next time he looks for it.

The limitation may be even more severe than this. It’s possible that the ruby’s Powers all have a Minor Power Burnout. Thus, concentrated usage over a short span of time would cause it to return to its tomb much faster.

I favor the first mechanism, because Abdul did keep the scarab for several years. Though it’s unclear how often he was called upon to use it.

He’s only got one appearance that I know of, so I’ve speculated a bit. Note that the exact powers the ruby scarab gives may vary depending on the aptitudes of the user, and it’s supposed to be even more useful to sorcerers. I only listed here the powers Mehemet displays.

Helper(s): The Official Handbook of the Marvel Universe vol. 1 #9 (September 1983), marvunapp.com  (which site we all love). Also Vinnie for the Ruby of Life connection. 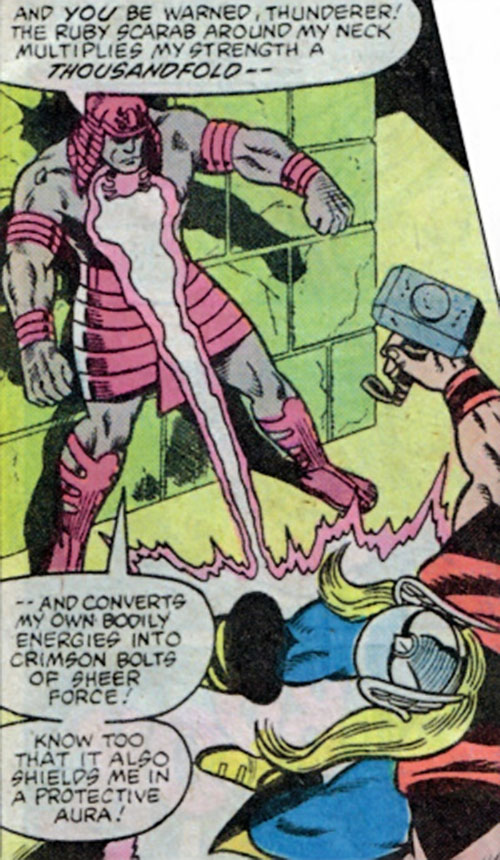 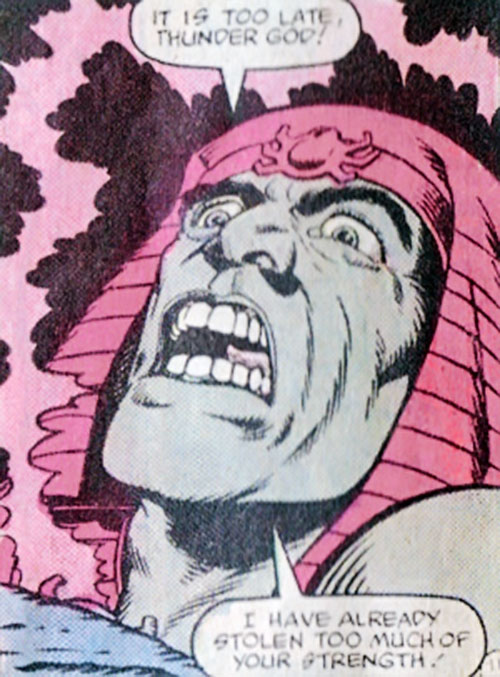