“This sacred scarab shall help the man who finds it likewise to find himself and the true path of the twin lands.”
— The Prophecy of the ruby scarab, written in hieroglyphics in the Tomb of Garret.

Abdul is an expert and respected archaeologist. He possess enough charisma to recruit and lead the Sons of the Scarab.

Wearing the ruby scarab, he’s a powerhouse able to battle both the Sub-Mariner and the Human Torch to a standstill. His strength and durability are on par with Namor’s, though the Sub-Mariner wasn’t at his most powerful in the Egyptian desert.

The Scarab can also:

Dr. Abdul Faoul was one of Egypt’s most prominent archeologists during the second World War.

He was also possessed of intense nationalist pride. Dr. Faoul desired Egypt to be free of British, and indeed all foreign influence. He was, in secret, allied to a political faction within Egypt that favored a German victory in the war. These labored under the mistaken impression that the Nazis would give Egypt full independence.

Sons of the Scarab

Faoul founded and led a subversive group called the Sons of the Scarab. These were fanatics dressed in the garb of Ancient Egypt, to recall the glory of the past, committing acts of sabotage against the Allies.

They had a secret base hidden somewhere among the pyramids, and were willing to kill anyone – Britisher or Egyptian – who aided the Allied cause, or so the British military reported. They would kill their own men rather than allow them to be captured and questioned.

Ironically, as an expert in antiquities who had conducted many expeditions in and around the pyramids, Dr. Faoul was called on by the British and Egyptian governments to help locate the hidden base of the Sons of the Scarab. Then the Invaders, who had been summoned from England, could find and defeat them.

Dr. Faoul directed the search away from the base of the Sons of the Scarab, of course. Furthermore, he manipulated two Invaders (the Sub-Mariner and the Human Torch) into opening the way for him into an ancient tomb. This tomb held a sacred scarab carved from ruby, possessed of great magical powers. 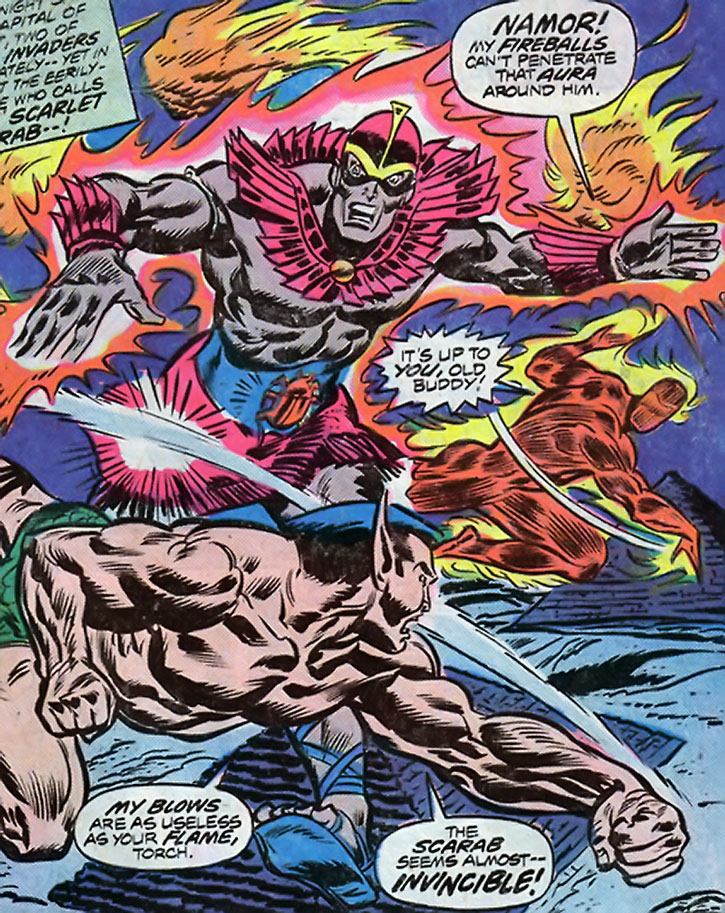 Abdul immediately claimed the scarab for his own, and threw off his western-style clothing to reveal the costume of the Scarlet Scarab. Proclaiming himself the leader, and almost the god, of the Sons of the Scarab, he attacked the Invaders and the Allied forces. Abdul also offered his aid to the Nazis in exchange for their promise to free Egypt.

After witnessing Nazi cruelty towards common Egyptians, he switched sides. The Scarab now helped the Allies and the Invaders to repel the Nazis from Germany. He then warned the Invaders that should the Allies harm any Egyptian, he would again turn his powers against them.

Dr. Faoul continued to use the sacred scarab as an isolationist champion of Egypt, until one day the ruby vanished. Abdul spent the rest of his life searching for it, but in vain.

On his deathbed, he revealed the secret of his identity to his son, Mehemet Faoul. Abdul charged him to continue the search for the scarab and once again recreate the identity of the Scarlet Scarab.

The Scarab wears a pretty gaudy costume that supposedly is modeled on ancient Egyptian styles. Though I doubt many ancient Egyptians had bright blue sandals. His wide belt is also blue, and the sacred scarab magically clings to it. He wears a scarlet loincloth, headdress, and wrist bands.

Dr. Faoul is intensely dedicated to the cause of Eyptian independence. He also shows megalomaniacal tendencies, lusting after the power of the scarab, comparing himself to a god or the angel of death, claiming Egypt as his territory, etc.

He makes lots of pronouncement and does a lot of shouting. I’ve included lots of quotes to give you the idea. In some sense he seems almost to think of himself as a pharaoh, and he likely will act as if he had the Authority Figure drawback.

According to the British, his organization, the Sons of the Scarab, is fanatical and murderous. In modern terms, they would certainly be called terrorists. The Scarlet Scarab did not seem to favor killing innocents, though, certainly not Egyptian innocents, and it was seeing Nazi brutality towards common folks that caused him to change sides.

“Abdul Faoul is dead, you foreign dogs ! He died in the selfsame instant that I beheld the sacred talisman ! And in his place is the Scarlet Scarab – deadly enemy of any and all who would grind the Black Land beneath their conquering heel !”

“‘VILLAIN!?’ It is you who are the villains in this piece, Invaders ! And you are aptly named, for you are invaders – the latest of a long line of conquerors of Egypt, all of whom are dead – AS YOU SOON SHALL BE !”

“While I wear the ruby scarab, I am invincible, fools ! I am the symbol of the new Egypt which shall arise from the ashes of the old – THE EGYPT YOU TWO SHALL NEVER LIVE TO SEE !”

“I am called the Scarlet Scarab… but I am also power… and Egypt’s destiny ! And no man, certainly not these guards, tells me where I may walk in the Black Land !”

“I was a blind fool… even as Prince Namor said ! You Nazis care nothing for any human lives but your own. But for you, Herr General – that life is over !”

“YOU FOREIGN-BORN FOOL ! Do you truly imagine I fought on your side just now because I suddenly love the British ? I fought for Egypt – an Egypt free of all foreign domination, whether Nazi, British, or other !”

“Whether the Scarlet Scarab shall fight again in this bloody war, only time will tell. I shall act for my country’s good – and no one else’s. If we meet again, it may be as friends – or foes. And now – FAREWELL ! “

The ruby scarab has obvious similarities to the artifact used by Daniel Garrett, the original Blue Beetle. (Meta-fictionally, the homage is obvious — the scarab was created by the ancient wizard Garret and the ancient warrior Dann.)

The first Scarlet Scarab would have clashed with the original Seven Soldiers of Victory or some of the original Freedom Fighters, or any contingent of the All-Star Squadron’s non-mystical members (those not affected by the Spear of Destiny).

Mehemet’s encounter with Thor would instead be with Captain Marvel in Fawcett City. (Hah, thought I was gonna suggest Superman, didn’t you! That’d work too.)

It’d also be interesting to see what use Amethyst and the other Gemworlders, especially the House of Ruby, might make of the sacred scarab.

The Scarlet Scarab I

Connections:
The Sons of the Scarab (High), Archeologists (Low).

Supposedly, when temporarily drained of Power, the ruby scarab teleports back to its ancient resting place to recharge. This is probably just a Power Complication Subplot that comes up every few years.

If you wish to represent this mechanically, then anytime a Power or Attribute of the scarab is reduced to 0 (by a failed Push attempt, a Neutralize or Power Drain attack, etc.), it teleports back to its tomb. It is considered to have 23 APs of Teleport for this purpose, and may have some Dimension Travel as well.

Note that the user of the scarab does NOT teleport with it, and in fact the ruby seems to teleport when it’s not being worn. The user may not even known it’s gone until the next time he looks for it.

The limitation may be even more severe than this — it’s possible that the ruby’s Powers all have a Minor Power Burnout. Thus, concentrated usage over a short span of time would cause it to return to its tomb much faster.

I favor the first mechanism, because Abdul did keep the scarab for several years – though it’s unclear how often he was called upon to use it.

The Sons of the Scarab

The Sons of the Scarab, led by Dr. Faoul, are Egyptian nationalists who hide out in a secret base somewhere near the pyramids. They strike at anyone who they see as working against the interests of a free Egypt. Because of Britain’s imperialist interests in Egypt, they initially sabotaged Allied targets.

The Sons are fanatically devoted to their cause and have been known to kill captured comrades rather than allow them to be questioned by their enemies.

Advantages:
Area Knowledge (the land around the Pyramids).

He only appears in one two-part story, so I’ve speculated a bit. Note that the exact powers the ruby scarab gives may vary depending on the aptitudes of the user, and it’s supposed to be even more useful to sorcerers — I only listed here the powers Abdul displays.

At one point the Scarab uses the ruby scarab to drain Namor’s strength. At the time it’s occurring, Namor says “My strength – being sapped, moment by moment !” After the fact, he says that the scarab duplicated his strength, rather than stealing it.

However, after being drained, Namor was too weak to keep flying, and more or less passed out. So I’ve gone with Power Drain rather than Adaptation or Mimic. This is also consistent with later depictions of the gem, as used by the Scarab’s son.

Helper(s): Vinnie (for the Ruby of Life/Sargon connection), Sébastien Andrivet (for stock soldier stats which I tweaked).

Source of Character: Marvel (The Invaders). 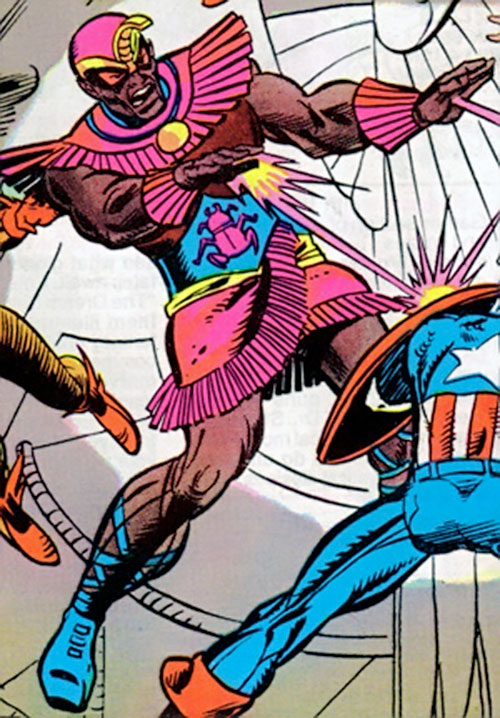 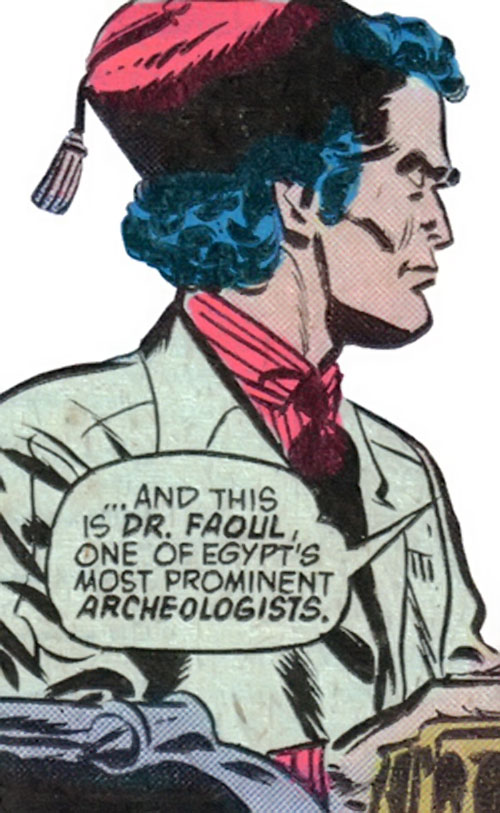