Wanda manipulates probability to alter reality as she wishes. She has also had combat training.

A Kind of Magic

The Scarlet Witch is able to mentally alter reality by comprehending the probability that another state of reality was in effect, and then bringing it into being. Some common uses of this include:

Other examples include neutralizing the powers of others (turning Colossus back to his human form, collapsing Iceman’s ice slide, overpowering Longshot’s Probability Manipulation), raising powerful force fields, and increasing the chances of Odin locating Loki.

He powers work by her concentrating on calculating the probability of the events occurring, and rushing the calculation can put a strain on her abilities

Wanda is the daughter of the mutant terrorist Magneto, and a human woman, Isabelle. Her father took her and her twin brother, Pietro, from their mother, to raise as part of his Brotherhood of Mutants cult.

Magneto showed them little affection, seeing them as a reminder of his weakness in loving a human. The siblings formed an extremely close bond within this environment.

They took part in a number of Brotherhood operations, including the kidnapping of the US President’s daughter, which brought them into conflict with the X-Men. She spent time with Cyclops when he appeared to changes sides. But when Magneto moved against Washington, Cyclops convinced Quicksilver to help stop him.

After their father’s apparent death in Washington, the siblings assumed leadership of the Brotherhood. They adopted a more political approach, even helping free the X-Men when they were abducted by Weapon X. Negotiating with the US Government, they worked on covert missions for S.H.I.E.L.D. in exchange for the release of mutant ’political prisoners’.

This change in approach led to disillusionment among the Brotherhood and the pair found themselves ostracised from the organisation.

They were recruited into the covert branch of S.H.I.E.L.D.s Ultimates team, and operated alongside Hawkeye and the Black Widow on a number of missions. They were later moved over to the public team, in time to aid in the repelling of the Chitauri invasion of Earth. 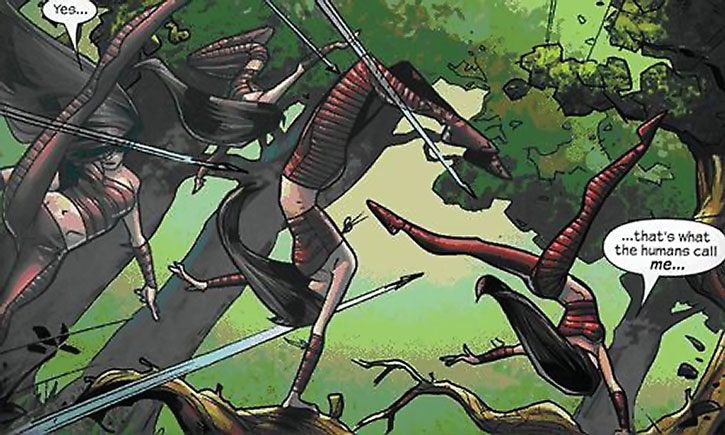 Magneto was later revealed to be alive, retaking command of the Brotherhood, and hunting down his wayward children. He broke into the Triskelion, and battled through the Ultimates present to confront his children, shooting out Quicksilver’s kneecaps as punishment.

The pair continued working with the Ultimates. They aided in the subdual of the believed traitor Thor. They also fought against the Liberators, a super-powered army organised by nations opposed to America’s actions. Wanda was also dispatched solo to capture the mutant murderer Longshot, when he was located in her former home of the Savage Land.

During the two occasions she has met it, she has been interest in Hank Pym’s Vision robot, and on the last occasion invited it out on a date, keeping it secret from Quicksilver.

Flighty and distant, Wanda can come across as an aristocratic air-head. But when in action she is calm, confident and focused. She seems to have few personal long term goals, living in the moment, and happy to let others guide her life.

She is unnaturally close to her brother, and they are rarely seen apart. She recognises that he’s very protective of her, and uses this at times, such as when she told him that Thor had hurt her to get him to forget his injuries and attack Thor.

“Oh, this is how it was meant to be, my brothers ; mutant standing shoulder-to-shoulder with mutant in the face of human oppression. Let us put aside the quarrel between our father and teacher and declare this year zero for the species that shall inherit the Earth.”

“All I have to do is change the probability of something bad happening to them… but the equations are so damn complex. I could fry everyone if I get this wrong.”

(After Quicksilver is injured by Thor) “There’s a reality out there where you’re a baby seal getting clubbed by a million Eskimos, Thor. I’m going to find it and bring it here.”

Bonuses and Limitations:
All Powers are Contingent on Probability Manipulation (-1).

In game terms, Wanda can reduce the APs of Sorcery used for the Mystic Bashing check by the AP of time she takes to make the calculations. Not rushing the calculations means lower fatigue.

The gulf between her SPIRIT and Sorcery is based on the assumption that using it to it’s fullest she’ll be spending HPs and/or taking her time in casting (see above). 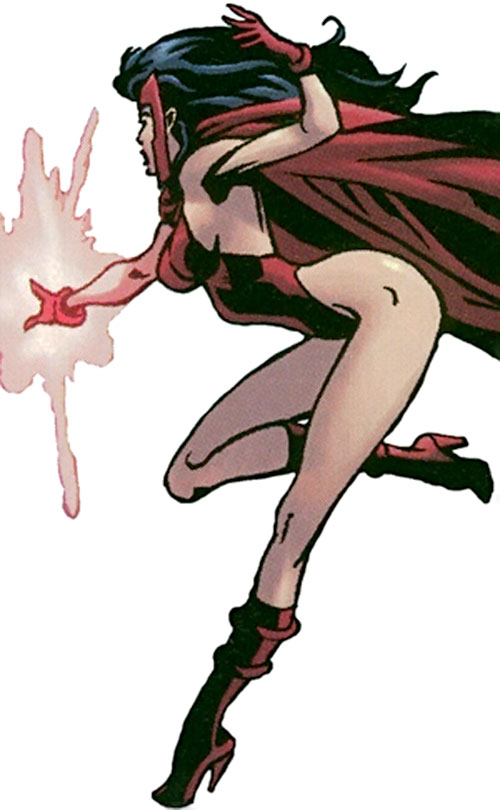 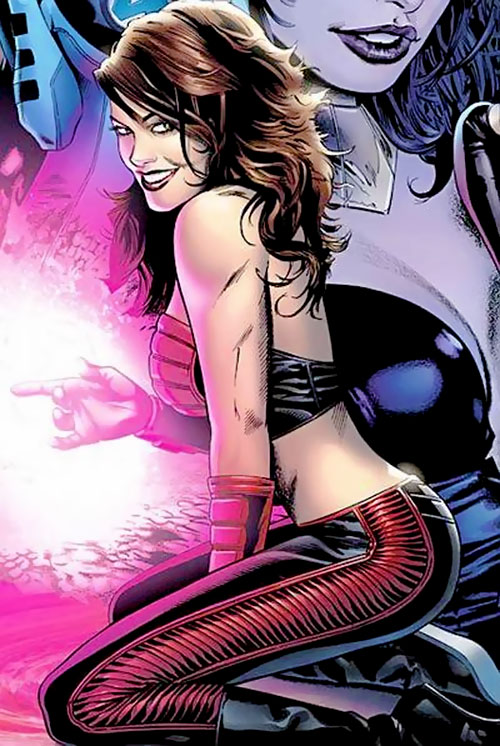 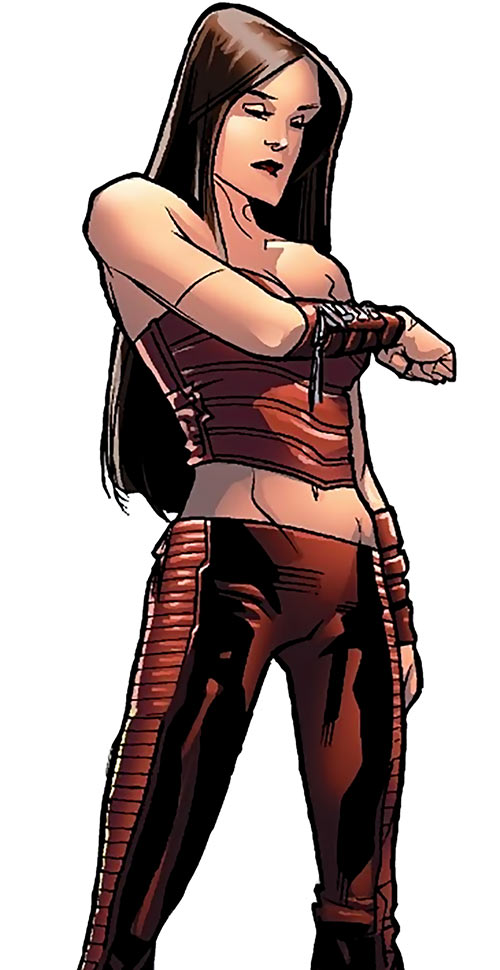