Scarlett is a intensively trained infantry trooper and special operative. She graduated from Advanced Infantry and Ranger school. She also attended Covert Ops and Sniper school. Her military training has included:

Scarlett is a qualified expert in a wide assortment of weapons from the M-14 to the Mac-10. She is also an exceptional hand to hand fighter and master of disguise.

Scarlett’s weapon of choice is the XK-1 Power Crossbow. It is highly accurate and can fire several type of quarrels. Additionally, she is usually armed with:

Shana O’Hara, aka Scarlett, grew up in a family that made discipline and training a part of daily life. Her father and three brothers were tae kwon do  instructors, and passed a love for the sport onto Shana. Scarlett began her own training at the age of nine and earned her first black belt by the time she turned 15.

As she grew older, Shana’s patriotic streak grew. She decided to enlist in the military. Upon completing her training, she moved into intelligence work. It was in this capacity that she first drew the attention of Hawk and Stalker, who were recruiting for the G.I. Joe strike force.

Scarlett’s first assignment was to give the new recruits a hand-to-hand combat refresher. The men found the idea that a woman teaching them to fight humorous until she defeated the largest of them. When she repeated the feat with Snake Eyes, they took her training seriously.

In the midst of the fight, Scarlett realized that Snake Eyes was letting her win. He was doing it to preserve her reputation at the cost of his own. Snake Eyes’ humility fascinated Scarlett. She asked him out the instant the session had concluded. He agreed, and the two went out that night. While they were out she grilled him for information about his past.

Despite her considerable charm, Snake Eyes revealed little about himself. He did admit that he studied martial arts in Japan. But he mostly talked about his time in Việt Nam and the loss of his family. By the end of the night Scarlett had become smitten with the mysterious stranger.

Months later, Scarlett took part in a hostage rescue mission. The mission team consisted of herself, Snake Eyes, Rock’n’Roll and Grunt. While they were enroute, their helicopter had engine trouble and threatened to crash.

The helicopter’s spinning caused one of the doors to shut on Scarlett’s gear. She could only watch while the others jumped free of the crash. Before he jumped, Snake Eyes noticed that she couldn’t move. In an instant, he turned back and tried to free her.

To her horror, a plume of glass and superheated vapour shot into his face while he fought to free her. Scarlett blacked out when the helicopter struck the ground. She awoke sometime later and found out that Snake Eyes had carried her to safety.

Six months later, Scarlett went to Snake Eyes and professed her feelings for him. Instead of reciprocating her affection, Snake Eyes rejected her. Though the rejection hurt, she understood that he didn’t want her pity or to have her feel indebted to him. The two remained close friends thereafter, and continued to work together on the team.

Months later, the Cobra agent Storm Shadow kidnapped Scarlett. He took her to Destro’s mountain stronghold for interrogation. In less than an hour, Scarlett escaped the prison. While leaving the stronghold, she saw Snake Eyes facing Storm Shadow. He had infiltrated the castle and had been attempting to rescue her while she escaped.

She turned back to save him from a fatal blow from Storm Shadow. The two then escaped in a stolen C.L.A.W (a modified jetpack). A few weeks later, Snake Eyes told Scarlett the details of his past. With that, the two began a romantic relationship.

Scarlett kept working in the field until Cobra assaulted the team’s secret headquarters. The attack caused the military to recognize that the team needed greater autonomy. Their solution was to give the original members of the team administrative roles. The assignment came with a promotion, but none of the members were happy with the assignment.

Despite her new role on the team, Scarlett continued to find herself in the field time and again. She took part in several covert operations. The largest of these was the invasion of Springfield, Cobra’s secret headquarters.

Shortly after the invasion, Storm Shadow infiltrated the Joe’s headquarters. He wanted to speak with Snake Eyes, and disabled several members of the Joe’s to do so. Scarlett managed to diffuse the situation and brokered the conversation that he desired.

In doing so, she formed a bond with Storm Shadow based on their mutual affection for Snake Eyes. This would benefit them both as mere weeks later as Cobra forces captured Snake Eyes in Sierra Gordo. After a failed rescue attempt by the Joes, he was transported to the Cobra consulate building in New York.

With Cobra gaining diplomatic immunity, the Joes couldn’t directly assault the building. With no other options, Scarlett planned an off-book rescue operation.

Unwilling to put any of her teammates at further risk, she turned to Storm Shadow for help. Hours later, the two had infiltrated the consulate building. With professional speed and precision, the two helped Snake Eyes fight his way to freedom.

Scarlett is always portrayed as an athletically built, yet shapely, woman. She has a beautiful face, with bright blue eyes and long red flowing hair.

When anticipating action, she wears a gray (or sometimes purple) full length body suit that covers her from neck to toe. Atop the suit, she wears a one-piece tan leotard with a complimenting pair of tan gloves and high heeled boots with pockets on the sides.

The right shoulder of the leotard has a reddish-orange pad with a pattern of squares covering it, and she accessorizes with a tan utility belt. Her gloves have a pair of shuriken affixed to the back of them, and she keeps a small holdout pistol on the interior of her right wrist.

Scarlett initially wore a tan helmet when she first joined the Joes, but eventually abandoned it.

Scarlett is self-confident, resilient, loyal and utterly without fear.

Outside of an initial period of adjustment, Scarlett has always fit in with the mostly male members of the team. She often comes across as one of the guys and has an acerbic sense of humor. Scarlett normally aims her steady stream of barbs at Clutch, a chauvinist). While she doesn’t openly look for opportunities to show up the men, she relishes the moments when she does.

Scarlett has a strong patriotic streak and is a consummate soldier. She is willing to fight and die for her beliefs and to defend the freedom of the people who count on her.

Despite this, Scarlett has developed a somewhat rebellious streak over the course of her adventures. While she would initially follow her orders to the letter, as time passed she found herself going “off-book” on missions or undertaking unsanctioned missions in order to protect her friends.

One would be remiss to talk about Scarlett’s personality without at least touching upon her feelings for Snake Eyes. She loves him intensely and would go to great lengths to ensure his safety, even at the cost of her own. The two share an attraction and bond that transcends the physical; Scarlett loves him despite his ruin of a face.

Even the ninja Storm Shadow has admitted that Scarlett truly understands what resides in Snake Eyes’ heart of hearts.

Scarlett, and every other members of G.I. Joe can be inserted wholesale into the DC Universe without changing their origins. Instead of dealing with a criminal organization named Cobra, it would be simple for them to be combating Kobra’s vast terrorist organization.

Alternatively, Scarlett might be a member of the O’Dare police clan in Opal City (see Hope O’Dare‘s profile).

GI Joe could be an extension of SHIELD or even the Super-Soldier program. It could be a mind shift or competing program. If they can’t make a “Super-Soldier” through engineering the soldier himself, they could take the best of the best and give them the best training and equipment and create a sort of “Super Unit.” See Skul‘s unit for another example.

Another method of inserting Scarlett into the MU, would be to include as Colleen Wing‘s half-sister.

“I’m going to make you wish you’d never seen me.”

“… I like the Staten Island Ferry ! I think it’s sort of… romantic.”

“Certain Joes who will remain un-named, like Clutch — have all the sensitivity of a rabid hyena.”

Doc: “Take it easy, Scarlett ! You’re out of this fight…”
Scarlett: “Not by a long shot ! Just give me a rifle and point me in the right direction !” 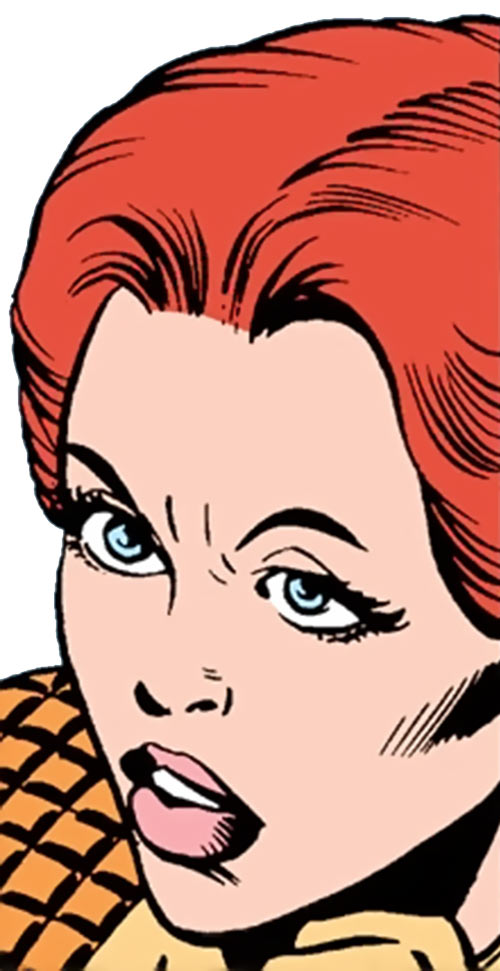 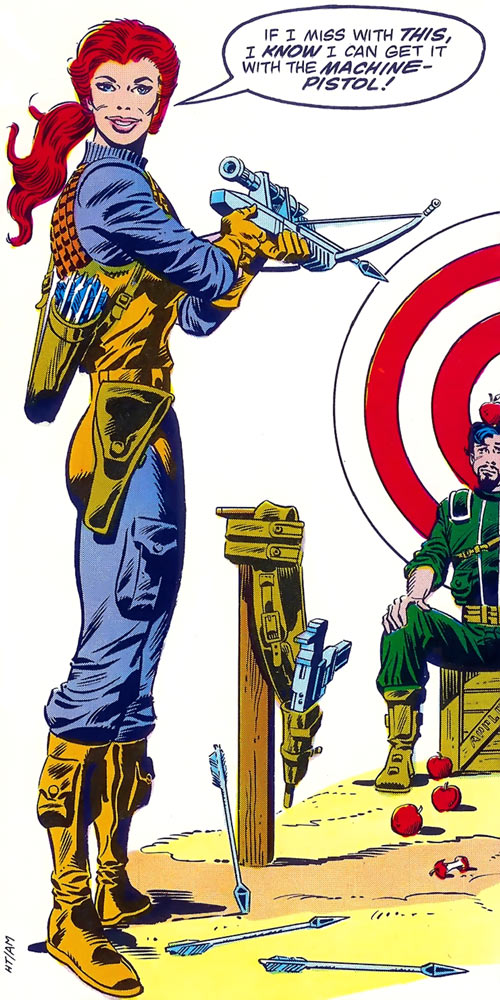 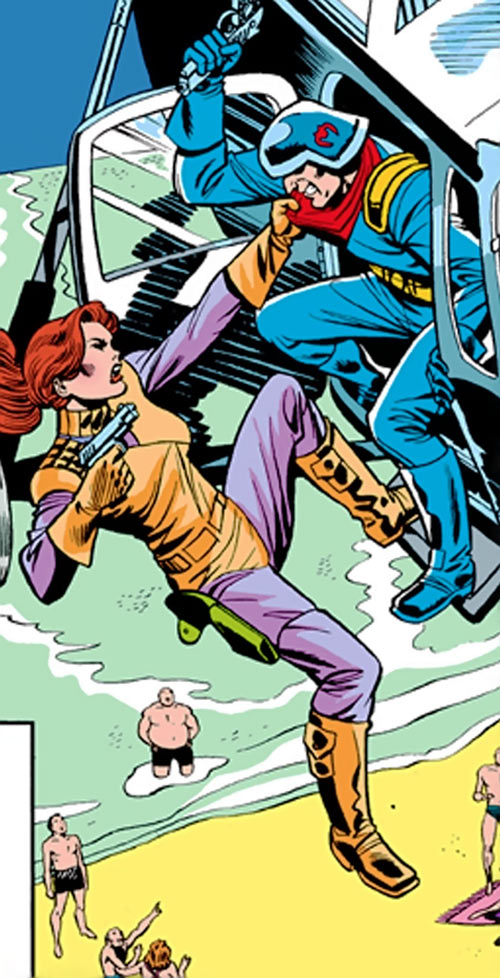 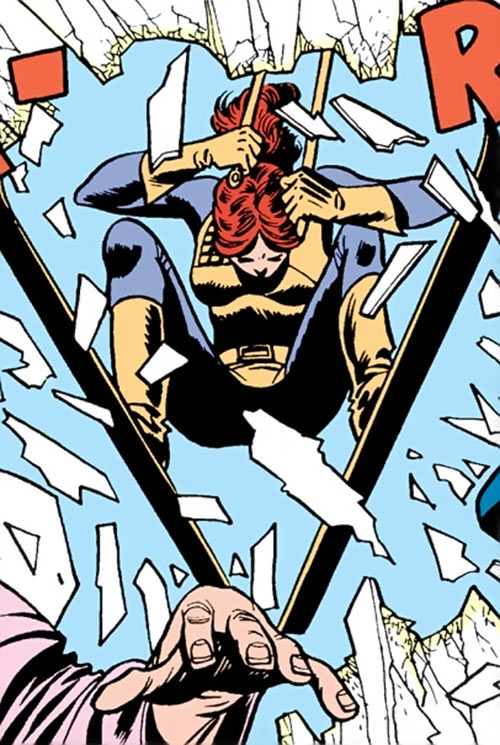