Scarth is a skilled fighter in excellent athletic condition.

He also developed a talent that allowed him to vastly increase his physical durability as long as he could see the incoming damage. His comments suggested that this was a psionically  derived power.

He also was a competent investigator. Scarth used both traditional on-site observation and technical data gathered by various instruments.

Scarth once caused a suit he was wearing to burst open during an enraged outburst. But this seemed to be a dramatic effect of flexing his muscles rather than an indicator of growth powers or superhuman strength.

Employed as a field agent for the Necrodyne Corporation, Scarth came into conflict with Chase Lawler while investigating Lawler’s recent adoption of the Manhunter persona. Scarth and Manhunter fought several times, with Manhunter ultimately prevailing each time.

Necrodyne’s final attempt at subverting Manhunter pitted the hero against a cyborg built with Lawler’s brother’s corpse. Scarth teamed up with Manhunter to defeat the monstrosity. He knew that the cybernetic creature’s success against Manhunter would likely end with it replacing Scarth at Necrodyne.

After defeating the bionic revenant, Scarth tried to take down Manhunter one last time. Manhunter blinded Scarth, completely depriving him of his superhuman durability, and then thrashed Scarth badly in a near-homicidal rage.

The fight ended with Scarth curled up in a fetal ball begging Lawler not to kill him. Lawler agreed so long as Scarth never crossed his path again.

Necrodyne recovered the seriously injured Scarth. To his horror, they announced their plans to use Scarth’s body as the foundation of another cybernetic warrior. Scarth has not been seen since.

Scarth is a muscular White male with short spiked blond hair. His usual attire on the job is a green leotard with a white combat harness.

Scarth is a classic bully in a position of power. His superhuman durability and his professional connection to a powerful corporation usually ensure that nothing bad can happen to him either physically or socially, which has fed his arrogance. He loves to bark orders and brag about his unique durability.

He continued to do so even after that durability had been tested by a drop from a skyscraper, almost to the point of mania.

Scarth’s boasts about the workings of his power also foolishly expose its major limitation. But Scarth seldom faces opposition that can go toe-to-toe with him long enough to exploit it.

The beating Scarth received from Manhunter during their final battle, which left him thrashed senseless and begging Manhunter not to kill him, may have wised Scarth up. If that is the case, he may not expose his limitation so openly in the future.

“Do I have to sweep this whole site myself ? A body. A whole force zone and all you can find is a body ?! Gauges don’t register ? Use your eyes ! Why’s that apartment torn open, and no other ? Find out who lives there, and where they are now ! I want them !”

“The name’s Scarth. Tell you a secret : I see you first, you better run !”

(Giving a lecture while in the middle of a fight) “Your problem is, you got the wrong attitude. Think it’s muscles ? A scary look ? Fighting’s all in the mind. Me, I see it coming and it can’t hurt me. Nothing can. It’s great. All in the mind.”

Bonuses and Limitations:
Skin Armor can only be used if Scarth can see the source of the damage ahead of time — see “I see it coming…” below (-1FC).

Drawbacks:
CIA (Bragging about his power).

Scarth’s superhuman durability was dependent on his ability to see whatever was about to damage him. If that was not the case, Scarth took damage like any other man, albeit one in excellent physical condition.

Manhunter exploited this weakness in several ways. Sometimes he attacked Scarth at an angle that Scarth could not see, such as kicking his knee from the side. More directly, Manhunter once took off his own mask and then pulled it over Scarth’s head, effectively blindfolding him.

During their final battle, Manhunter used the blasts of Scarth’s own gun to blind him. He noted that Scarth could not see a light-based attack coming because it was already striking him by the time he saw it. He then mercilessly pummeled the blinded Scarth, who had thus been rendered incapable of using his power. 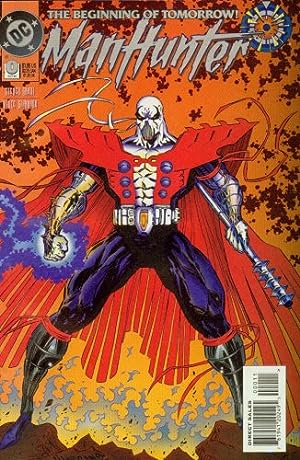