In 2010, this led to publishing actual Science Dog comics, so we could see what the Invincible Universe characters liked so much.

A lab accident evolved Science Dog from a Scottish Terrier to his currently form. Science Dog now possesses a genius level intellect. It surpasses that of any other being of his Earth by a factor of ten. His ability to think abstractly and to learn new concepts is simply superhuman.

His theories and hypothesis are generally revolutionary in any field that he is currently studying. All of his inventions either expand on previous breakthroughs or represent a quantum leap in science or technology.

In addition, his senses are at least ten times as keen as the average human. Which makes them approximately five times as sensitive as would be found in the average dog.

Despite the advanced technology at his command, Science generally adventures with a relatively simple set of equipment. He uses a twin turbine jet-pack with a range of approximately 1500 miles and a maximum airspeed of 175 mph.

Science’s main offensive weapon is a custom designed pistol. It is capable of shooting a variety of ammunition types on demand, including explosive and incendiary rounds.

Science the dog was the personal pet of a brilliant scientist named Dr. Collins. Collins was on the verge of creating a technological wonder the like the world had never seen – a time machine.

Despite his brilliance, Dr. Collins was a superstitious man. He believed that Science brought him good fortune, and thus always kept his dog close by. Science thus became the lab mascot.

Only one of Dr. Collins’ assistants saw Science as a nuisance. Walter often argued with Dr. Collins over Science’s presence in the lab. But he was always overruled by Dr. Collins and his other assistant Daniel.

The trio worked tirelessly on the time machine. Everything seemed to be going smoothly with the time machine’s initial test run, until a small toy ball started rolling towards the pod.

Science raced after the ball even as the device was activated. Walter, ever annoyed with the silly dog, raced after him to prevent him from disrupting the delicate device. It was at that moment that the time machine malfunctioned. Both Walter and Science were caught up within a temporal explosion.

Daniel was paralyzed from the waist down, and Dr. Collins was killed. Closest to the blast, both Walter and Science underwent a process that put their bodies through a million years of evolution in a single instant.

Science was changed into a superhumanly powerful, well built bipedal being with a matching intelligence. Walter, on the other hand, was horribly deformed by the accident – but gained powerful telekinetic abilities.

After recovering from the accident, Science joined Daniel and his new assistant Rachel in rebuilding the lab. He also used his new found strength to battle any forces of evil that threatened mankind. In a matter of months, Science become a celebrity and a house hold name.

Nothing but a hound dog

Science’s greatest test occurred when he encountered an unknown alien race. They had become stranded within Earth’s orbit after running out of fuel. The alien’s teleported Science to their vessel while he was in a pitched battle with Walter (for the 14th time).

The aliens needed someone brilliant enough to create a new fuel source. After observing Earth, they decided that Science was that individual. Desperate, the aliens kidnapped Science and threatened to destroy the planet unless he helped them. Science complied with their demands. 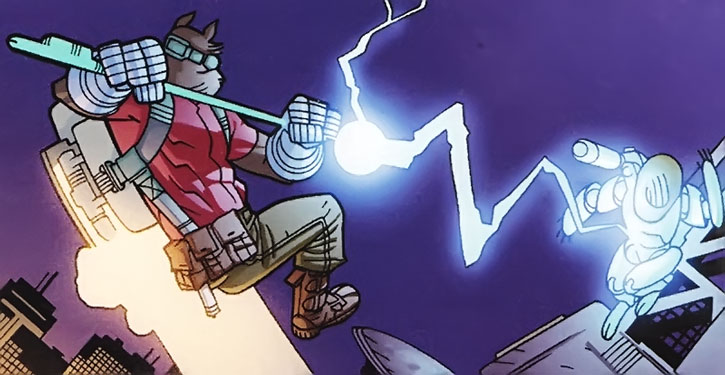 The aliens had prepared a stasis chamber. Within, Science could work uninterrupted. Science eventually engineered a process that would re-create the aliens original fuel source.

Relieved that the work only took a few hours, Science was eager to return to Earth and deal with Walter. Unfortunately, he underestimated the stasis effect of the chamber. Instead of being within the chamber for a few hours, he had been working within it for 11 months.

Science thus found a dystopian landscape waiting for him. Walter had run amok across North America and somehow destroyed the city Science had attempted to protect.

Science eventually stumbled across Rachel, and found out that in his absence Walter had murdered Daniel. Instead of confronting Walter, Science went into solution mode. He began a six year long process of recreating (and perfecting) Dr. Collins’ time machine.

Science used the machine to travel back to the moment he disappeared. But he was temporarily disoriented by his trip through time. By the time he had regained his wits, the present day Science had already been abducted by the aliens – and Daniel had engaged Walter in battle in his place.

Science gathered his combat gear and raced to the battle ground. He arrived just in time to see Walter murder Daniel. Enraged, Science murdered Walter in retaliation. Then he returned to his underground lair, resolute that this wasn’t over.

Science spent the next six months recreating the time machine. He ignored everything that happened around him, including attacks by powerful super-villains and horrific menaces. Rachel lost an arm during one such conflict. But Science continued to work, reasoning that none of it would matter when he went back in time and fixed things properly.

When the time machine was ready (for the second time), Science went back once again. But this time, he was better prepared for the transition. Moreover, he travelled several minutes further back.

I can fix this

As the “present” Science went to battle Walter, “future” Science rocketed into orbit searching for the alien vessel. He didn’t even bother to conceal his exit, which was witnessed by both Daniel and Rachel.

It didn’t take Science long to discover the location of the alien vessel. The aliens were taken aback when “future” Science came in to offer help, but were grateful nonetheless.

”Future” Science had but one condition for his aid. Upon the completion of his work he wanted to be taken far away from Earth as two Science dogs may have been too much to bear.

Back on Earth, “present day” Science Dog made quick work of Walter and returned him back into police custody. He was completely unaware of the catastrophe he had narrowly avoided. Daniel and Rachel, who had witnessed “future” Science leaving the lair decided that it was for the best to keep what they saw a secret until a later date.

Science Dog is a large bipedal man-shaped humanoid. He is clearly inhuman though, his head and features greatly resemble that of a Scottish Terrier, complete with swivelling ears, a snout and those large eyes.

His body is covered from head to toe with brownish grey fur. His hands and feet are three fingered and toed.

Science normally dressing in a red short sleeved top, and green cargo pants. He tops off his “uniform” with a pair of sturdy brown work boots and a dark pair of gloves.

Science is a compassionate, loyal and brave adventurer. His courage can only be matched by his insatiable curiousity. His personality has been crafted in the model of pulp  science heroes like Doc Savage or Tom Strong.

Daniel: “We got someone or something doing some major damage downtown, looks like that rest will have to wait. Sorry, old friend.”
Science: “Don’t sweat it, Daniel. Nature of the business.”

“What were you doing three hours ago, Walter ? I was clashing swords with the ruler of another dimension !”

Science could have been a card carrying member of the JLA during the Keith/Giffen era. He would make a fascinating straight man to the Blue Beetle during this time. Or even taking his place and working alongside Booster Gold.

Bonuses and Limitations:
All Powers have the Form Function Bonus (+1FC per power).

Writeup completed on the 3rd of November, 2012. 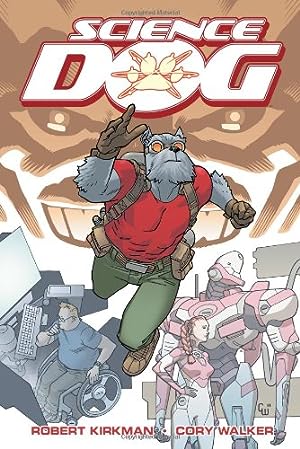 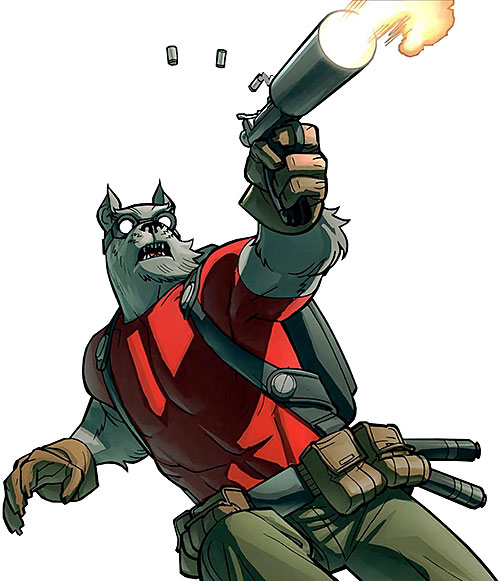 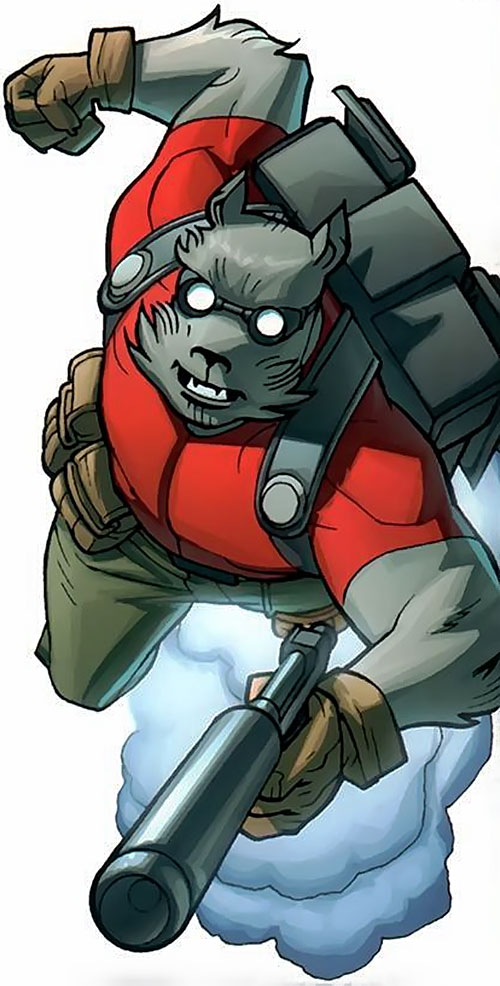 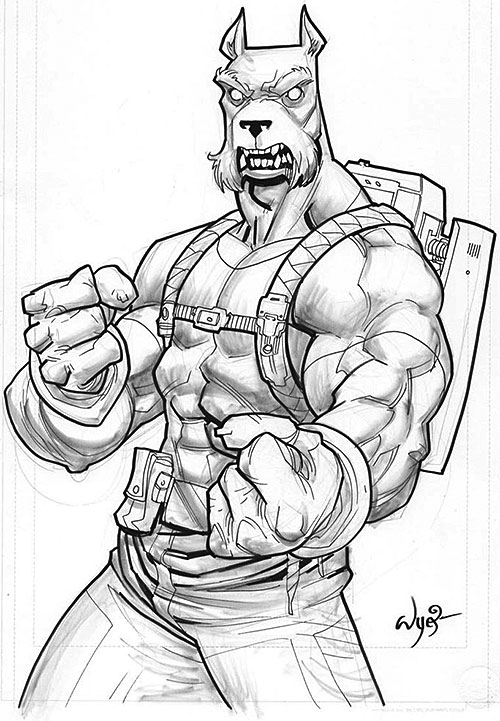