Initially as the Diamond Stud, Scott Hall was just another thug. A well-trained thug, but nothing super-human. Thanks to the connections of his best buddy, Kevin Nash, they met Hogan, who hooked them up with the refined Freak drug.

Hall became a living weapon, able to morph his body into any form, as long it’s nice and sharp. His body is also almost impossible to cut or puncture, thanks to his unusual skin. His already formidable skill in weapons also grew in immense levels when combined with his powers.

Hall truly began his career as one of Diamond Dallas Page’s goons. He was part of the Diamond Mine, a group of criminals working under DDP’s guidance. Although not very successful, he met the man who’d be closest to him in the future, Kevin Nash. Along with Nash (at the time going by the name of Vinnie Vegas), they took off to New York, in search of bigger, better deals.

Nash hooked them up with the popular superhero Hogan, who had begun to quietly enter the underworld secretly. Hogan had just been publicly humiliated by the revelation that his powers were from an illegal super-steroid.

Actually, the steroid was having an unbalancing effect upon his psyche, turning the hero more and more into a villainous nature. Hogan gave them the steroid, which he had began to personally refine, granting them powers. Hall and Nash began a small wave of terror as the villains Razor Ramon and Diesel, but even tried the hero gig for a while. They tired of it quickly however.

During this time, they also hooked up with a few other metahuman to form a sort of mutual protection society known as the Clique. Along with Shawn Michaels, Hunter Hearst Hemsley, and Sean Waltman (then known as the youthful 1-2-3 Kid, now the anarchist called X-Pac), they influence metahuman affairs behind the scenes.

At one point, Sting and Luger, with the help of another local hero, had them nearly captured when Hogan showed up. Hogan was still publicly a hero, so Sting and company relaxed when he entered the scene. Hogan then brutally attacked them, aiding Hall and Nash to escape.

On a side note, during this time, two others donned the identities of Razor Ramon and Diesel back in New York, but they were found dead weeks later, gutted to pieces.

Hogan has gone underground now, mass-producing the super-steroid, now known as Freak, for those who can pay the price. Forming the NWO (New World Order), Hogan, with Hall and Nash as his enforcers, market the product out. They required both cash and service obligations in return for their metahuman powers. Many people have served the NWO, but the only ones privy to their actual plans are the original three.

Hall doesn’t require regular doses of Freak, thanks to the refined version he has used. But he does have a drug and alcohol problem, which has already caused his divorce. He’s trying to overcome it, but sometimes it’s just too much.

Lately, he’s been working odd jobs in Japan also, while Nash has taken some time off to spend with his kid. But the Outsiders can reunite at any time.

Hall is a tall man with medium-length black hair, usually gelled up and curly. He favors no shirt or just a vest, with either black or purple coloring, and shorts or jeans. He’s too macho for a real supertights outfit.

Hall is machismo incarnate. He’s a tough guy, mimicking either a New York Italian accent or Cuban accent, depending on his mood. He usually carries a toothpick in his mouth, which he chews on as he talks. He’s one for taunting his opponents, as he’s always looking for a fight.

(In a quasi-Cuban accent) “I am dripping with class, and oozing machismo.”

(Looks from side to side) “…Hey Yo, …” (Throws toothpick at opponent’s face)

The NWO make a great small but powerful drug-running outfit. But they have bigger plans, as they have their customers start rebellions, insurrections, and other forms of chaos. The NWO’s goal is more likely to foster anarchy, so that Hogan can place his own people in charge of governments.

This makes them a great force to reckon with on any team level from the Titans, to even the JLA if the plans are vicious enough.

Individually, Scott makes a great opponent to any high-level street hero such as Nightwing or Batman. But if Nash is involved, they are a serious enough threat for the Batman family together.

Before getting the refined Freak steroid, Scott had the following changed stats, and no powers. 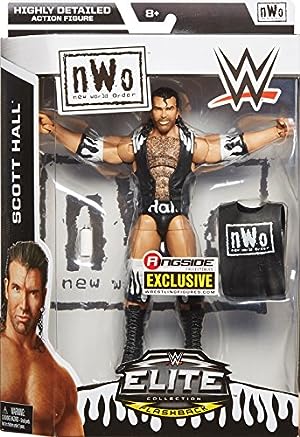