As a result of controlled use of the meta-human steroid, Freak, Scott Steiner possessed mild superhuman strength and endurance. He was an amazing athlete and fighter, with a high level of gymnastic talent. In terms of natural talent, even without training, he rivaled the potential of the Dynamite Kid.

After beginning to habitually overdose on Freak, Steiner’s strength skyrocketed. His stamina and ability to withstand damage also rose, but not on a level proportional to his strength.

He can, for short periods of time, quadruple his density by converting molecules immediately surrounding him into body tissue. This increases both his resistance to harm and his strength, although it places significant additional strain on his body.

Rick began to cycle on the steroid regularly, not realizing that a) it caused superhuman strength in those taking it and b) it was absolutely guaranteed to show up on even the most cursory drug tests. His attempt to qualify for the Olympics ended in a crippled opponent, humiliation and a banning from active competition.

After that, he was an easy mark for Kevin Sullivan. Sullivan was forming his “Varsity Club” – a group of disgraced athletes banned from competition due to superhuman abilities. They assisted Sullivan in a range of criminal activities. Sullivan provided the “Freak” and Steiner did as he was told.

Upon graduation, Scott had intended to do what his brother could not and wrestle at the Olympic level. Before he could even get that far, Sullivan recruited him. He claimed that he needed Scott’s help to watch out for Rick. Steiner bought into Sullivan’s act and joined, even going so far as to get into a regular program of injecting Freak.

Scott was Sullivan’s real catch. He was light years beyond Rick or anyone else in terms of sheer fighting talent. Scott also had a face that everyone wanted to trust. Scott joined the group, discovered the nature of Sullivan’s activities, and decided that neither he nor his addled older brother were going to stick around.

Rotundo and Sullivan were both severely injured by the Steiner Brothers. Williams left to seek his fortune elsewhere rather than stick by them.

Get your Freak on

The Steiners spent the next few years fighting corruption inside the sports world while secretly feeding their Freak addictions. Scott provided most of the talent and brains. Rick was something of an “idiot savant”, retaining much of his athletic ability and fighting prowess. But those around him saw him alternately as a savage beast and as a drooling incompetent.

Rick’s condition continued to deteriorate until Scott had to institutionalize him. Struggling for money, Scott changed his physical appearance drastically, cutting and bleaching his hair and tripling his Freak dosage. He began using his vastly increased strength to commit crimes under the alias “Big Poppa Pump.”

While his strength was multiplied, his agility and speed went down and he began suffering from violent mood swings. His brushes with the law and with superheroes usually ended with someone severely hurt, as Steiner lost more and more control over his temper.

Steiner fell in with a Freak smuggler (and user) calling himself Buff Bagwell. The two worked as partners until, after several successful months, they were opposed by the mysterious crimefighter Sting. Sting recognized Steiner and brought Rick out of his hospital to talk his brother into surrendering.

Bagwell turned on Scott and fled the scene, while Scott calmed down long enough to be taken into custody. His trial was quick and his incarceration even quicker – someone slipped him a supply of Freak during prison visiting hours and he broke free the following day. He is currently at large.

A Scott Steiner entrance (w/Buff Bagwell). The clip also has a Goldberg entrance.

Steiner’s musculature is grotesquely overdeveloped. His hair is short, bleached almost white, as are most, but not all, of his mustache and goatee.

Steiner is egotistical, violent tempered, and rude. Always. He was considered a relatively nice guy prior to taking “Freak”, the metahuman steroid which enhanced his strength beyond their already superhuman levels.

“Hollar if you hear me. Big Poppa Pump is your hook-up”

Considering the Superman logo tattoo that Steiner has, and his love of wearing that logo, he might be a minor-mid level villain inspired in his quest for higher strength by Superman, leading to Superman feeling the need to bring him to justice.

Bonuses and Limitations:
Density Increase is Fatiguing and has Serious Burnout.

Drawbacks:
Catastrophic Rage, CIA to the drug Freak, MPR: Bad Back, Loss Vulnerability: Failing to take his weekly dose of Freak (all Powers, STR and BODY drop to 4).

Even without taking the Density Increase into account, Steiner’s increased STR takes its toll on his DEX. Prior to 1998, Steiner’s stats are as follows:

By Andrew Lee, based on concept by Jessie Davis. 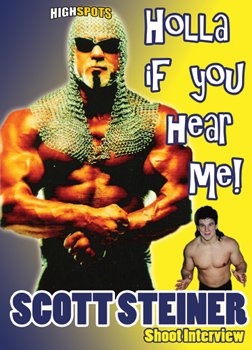 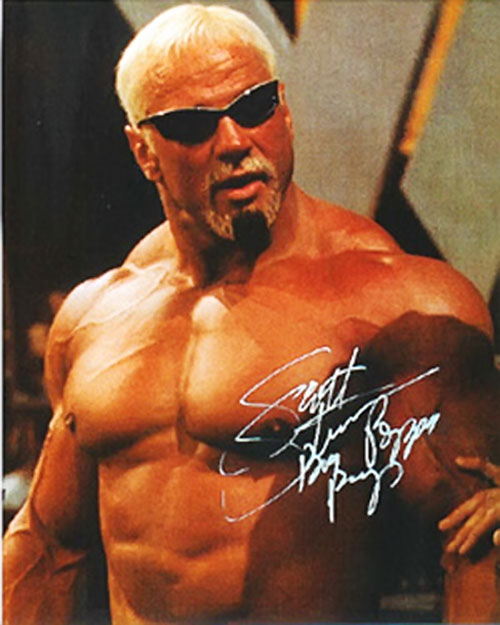 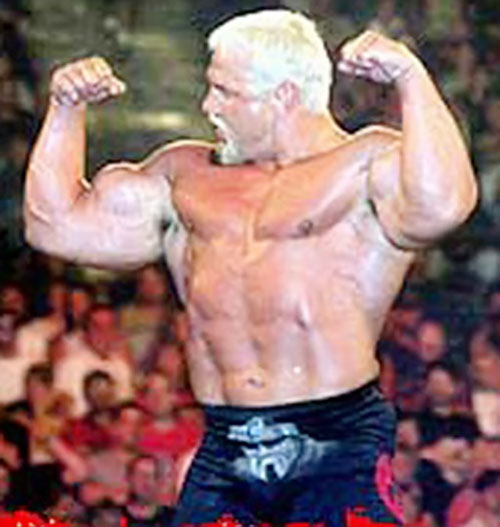 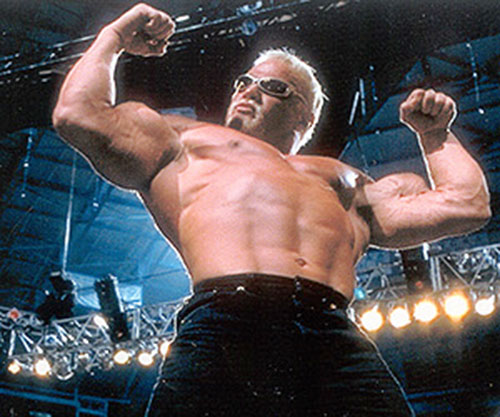