Lionel Jeffries was able to completely reorganize the structure of organic matter by touching it. He was also able to psychically sense the presence of his brother within an unknown radius.

Lionel Jeffries began as an extremely compassionate doctor, trying to use his mutant abilities to help others. Driven mad by his own limitations and inability to defeat death, he became a raving killer.

Forced to use his own power to “cure” himself, he instead altered the nature of his insanity, making him a megalomaniac, bent on leading a superhuman domination of society.

Lionel Jeffries was a mutant like his brother Madison, able to affect flesh like the latter affected metal. While serving in Việt Nam, the Jeffries’ unit was attacked and decimated. Lionel attempted to use his abilities to bring the dead back to life. He could not, but went insane in the attempt.

His brother stopped him by creating metal restraints. Lionel was then put into solitary at a Montreal hospital. He was cut off from all human contact in a cell and full body restraint.

There he remained until visited by Heather Hudson. Hudson was investigating Madison Jeffries’ past. She had gone to Montreal thinking Lionel was still a doctor, not a patient. Hudson used her security clearance to gain access to Lionel’s cell.

Once she was inside Lionel managed to lurch forward and cause her hand to slip inside the visor of his helmet. Touching her skin with his gave him control over her body, and he used this to effect an escape.

Having discovered Hudson’s investigation, Madison Jeffries went after her, taking Alpha Flight with him. Jeffries found his brother in the morgue, once again trying to reanimate the dead. Scramble had also used his transmutative abilities extensively on the hospital staff and patients.

Madison stopped the rampage by forcing his brother to use his abilities to cure himself, using Madison’s mind as a model to follow.

For a time, Scramble operated a clinic called New Life. There he treated wealthy people desperate enough to go to a man with no medical license (his had been revoked years before.) Among his staff was a man named Whitman Knapp. In seeming gratitude for his cure, Scramble acted as “team doctor” to Alpha Flight for a time.

However, Jeffries was NOT cured – only insane in a different manner. He now was megalomaniacal, and convinced that super-humans like himself would come to rule the Earth. To this end, he had surrounded himself with such people, including Knapp and the beings who became known as the Derangers.

When Alpha became aware of his plan, Scramble joined with Roger Bochs, merging into the composite being called Omega in order to battle them. Alpha Flight and Knapp managed to defeat Omega, but not before Scramble had lobotomized Bochs. Deciding that imprisonment was not a safe option for his brother, Madison Jeffries morphed the Box robot into a cannon and completely obliterated Omega.

I’m amused by the idea of Madison and Lionel Jeffries being among the New Guardians during Millennium , developing their powers earlier and then throwing the Guardians plans for a loop when Lionel turns out to be a serious problem.

Scramble the Mixed Up Man 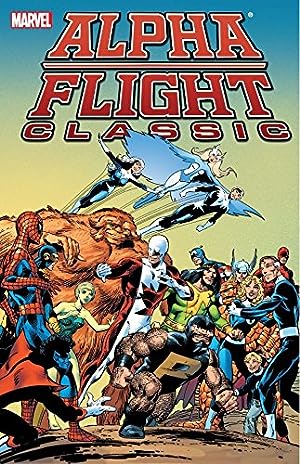