With a touch, Scrambler can negate the powers of any being he touches, or enhance their powers beyond their control or otherwise negatively manipulate the victim’s abilities.

He can additionally also stop the autonomous nervous system of a target which effectively renders them incapacitated for a period of time. This combination of powers make him a perfect tool for softening up opponents so that his teammates can finish them off more easily.

Scrambler is physically a poor combatant and often gets his ass kicked. But this doesn’t stop him as he also has the will of a psychopath (in DC Heroes terms, excessive use of Last Ditch Defence).

He appears to have no other abilities except being able to cling hard to any opponent until they are finished.

This mutant Korean mercenary was hired by Sinister to join the group of Marauders for different missions, mostly involving killing mutants. He first appeared during the Marauders slaughter of the Morlocks.

As many other Marauders the current incarnation is a clone made from the original who has died during one mission or another. These clones, however, work and think exactly like the originals. For most purposes, the Marauders are thus unkillable.

His psychological condition is unclear, but he seems completely loyal toward his teammates.

Scrambler looks like an everyday Korean lad. He isn’t particularly muscular and wears ordinary clothing. On the street no-one would see anything special about him except for one important detail : he’s always seen with a large grin and mad eyes.

In combat situations Scrambler simply tries to touch the opponents (in DC Heroes RPG terms, Flailing attack) and is always seen standing on the frontline of his team and grinning at the victims.

Scrambler is a loudmouthed and dangerous psychopath. He enjoys robbing people of their abilities and letting his teammates finish them off. He believes his powers make him immune against any opponent. He’s clearly a very disturbed man who attacks the opponents even though there is a clear risk that he will die doing so.

Scrambler probably has seen too many action movies. He’s an ego-ridden poseur, and is trying to sound and act cool at all times.

No life is worth anything for him except his teammates’. He will carry out whatever order he gets from the team leader on hand.

“You’ll save nothing ! Scrambled your powers, haven’t I, rug-rat ! Hold on long enough, an’ I’ll scramble your life !”

Note:
As with most neutralizers his Neutralize cannot affect natural abilites such as, for example, claws. Such abilities are often denoted with the Innate Advantage. 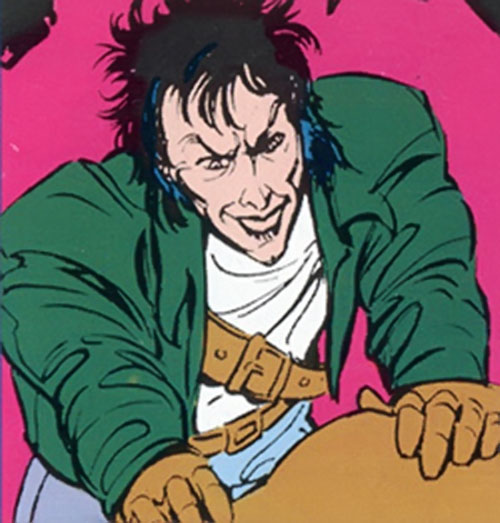