Scrap is a basic brick . As such, she possesses superhuman strength (“Class 25”) and resistance to damage. She is strong enough to hoist a fully loaded tank over her head and can rend solid steel with her bare hands. In addition she is resilient enough to survive a fall from a skyscraper and can easily shrug off automatic weapons fire.

With practice, Bridget has trained her superhumanly powerful lungs to hold her breath for approximately 20 minutes.

The Aquarium’s resources include equipment with which Warner can monitor the police radio for watch words that trigger an alert to the team of a possible emergency. These also allow her to summon, monitor, and communicate with members of the team during engagements with hostile forces.

The team also utilizes a teleportation device called the Jump Station. It allows them to travel instantly across the continent to meet with one another.

Following the assassination of her husband Captain Dynamo, Maddie Warner discovered from his personal effects that he had been unfaithful to her countless times. Despite this betrayal, Maddie realized that without the Captain to protect it, Tower City would soon be overrun by the super-villains that her husband had left behind.

Using the cache and her investigative skills, honed from years experience as a super spy and ace reporter, Maddie tracked down five young men and women. These were her late husband’s illegitimate children.

Cleveland native Bridget Flynn was the fourth of the five children found by Warner. Warner found Bridget working behind the ticket counter at a local Hollywood California movie theater. When Warner explained her story to Bridget, it didn’t take much convincing to make the young woman curious.

Bridget was just biding her time at the movie theater waiting for her big break. She had graduated from the NYU Film school  and left her family behind to pursue her dream of becoming a screenwriter. Unfortunately, upon her arrival in the city of Angels, Bridget discovered that things wouldn’t be as simple as she hoped.

Therefore, Warner’s story offered her a welcome distraction to the drudgery of her life. 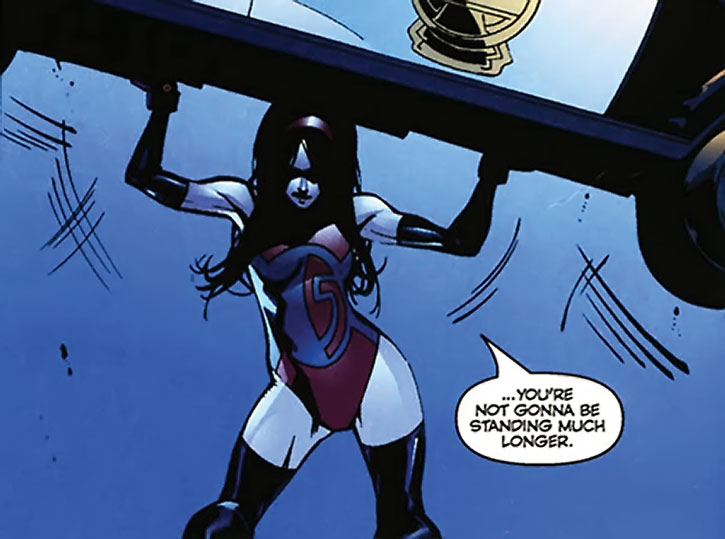 Bridget soon found herself in a gathering with four strangers. She immediately realized that she was the oldest of the group. As they mingled, they were suddenly exposed to a high dose of the same unidentified radiation that gave Captain Dynamo his powers 40 years earlier.

The radiation immediately unlocked their latent powers. Bridget inherited her father’s super strength and invulnerability. She took the codename Scrap, and worked alongside her new found siblings to protect Tower City.

As a form of payment, Warner offered to put Bridget in touch with some of her entertainment contacts. Surprisingly, Bridget politely declined the offer. She explained that she would prefer to make it on her own without any preferred treatment.

Bridget participated in early adventures. The siblings battered away at the criminal element that rose in Tower City immediately after Captain Dynamo’s death. Her strength became the corner stone of the Dynamo Five’s offense.

It was at this point that Bridget’s father paid her an unexpected visit a few days before Father’s Day. Suspicious of his reasons for the visit, Bridget questioned him. He eventually said that he and her biological mother had separated because they were no longer in love. The pain of this confession touched Bridget deeply. She threw herself even further into fighting crime. 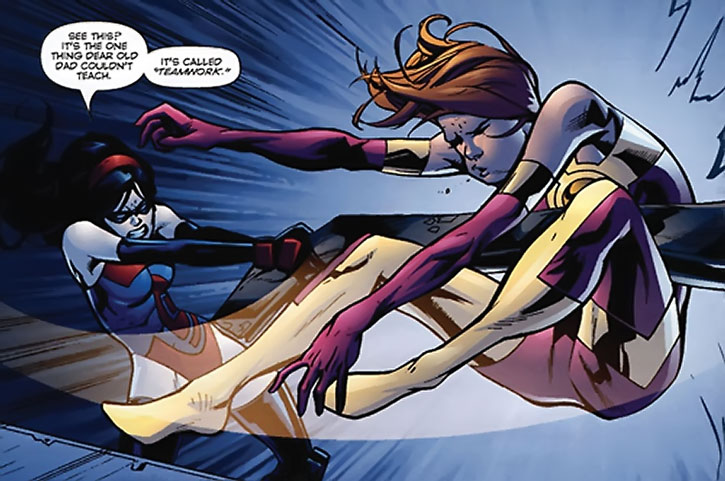 Nearly a year after the five discovered one another the Dynamo Five disbanded. That was despite their continued success in defending Tower City. The stress came from:

This caused enough dissension amongst the siblings to make them end their adventures together. Everyone, except Bridget, returned to their separate lives.

Bridget, out of a sense of duty, remained in Tower City as it’s protector. But she quickly realized that despite her awesome strength, that she couldn’t defend the city by herself. As a result, she began recruiting a new Dynamo Five. She built a team out of Captain Dynamo’s old allies to replace her siblings. This group had some small success.

Unfortunately, the new Dynamo Five eventually drew the ire of a combined force of villains that they had faced in the past. The new team was quickly demolished. But Gage telepathically sensed her need, and her brothers and sister raced to Bridget’s aid. At the moment when the odds seemed insurmountable, the original Dynamo Five regrouped and made quick work of the combined force of villains.

In that moment, the five youths realized that despite their differences that they were not only a family but that they needed each other. With the team reunited, Bridget decided to move from Los Angeles to Tower City full time and continue her adventuring.

Bridget appears to be an athletic, pale white woman. She wears her long black hair past her shoulders. Flynn holds it at bay from her face with a red head band that sits atop her head.

Her costume is a one piece shoulder-less leotard, that leaves her legs bare except for her boots. It is a blue and red number, without the requisite low plunging neckline.

Like her siblings Bridget wears a blue domino mask to hide her face. Finally, Bridget has a labret piercing, below her bottom lip but above the chin.

Of the five, Bridget is the most dedicated to the Hero biz. She feels a true sense of responsibility for Tower City and will not walk away from its people. She is scrappy, driven and loves a good fight.

She’s smart enough to realize that she’s still a rookie in the big scheme of things. Thus, she is constantly training in order to get stronger and faster. Bridget will never give up no matter what the personal cost to herself.

In addition, Bridget is definitely cognizant of the danger that her great strength poses to normal humans. She goes out of her way to avoid accidentally killing mortal men.

The Dynamo Five can be dropped wholesale into the DC universe as is. Tower City can be yet another fictional city within the DC USA.

More interestingly though, each of the siblings could have been the illegitimate offspring of a certain Martian a less cordial campaign.

“Are you for real ? Honestly, I’ve only been a super-hero for about ten minutes, so I hesitate to give notes so early in the game… but I’ve got a degree from NYU film school, and if I ever had one of my characters talk like that, I would’ve been laughed off of campus.”

“Gentlemen, we can do this the easy way, or the hard way.”

(After choking out Whiptail, a lizard-like creature) “Huh. And here I thought only guys could choke a lizard.”

Radia: “Just snap her neck, Deadweight. We got places to be.”
Scrap: “Like jail, or the hospital ? Your choice.”

“You’re totally right, and that’s why I’ve brought you all here today. As I’ve witnessed firsthand in the last 24 hours, Tower City is a mess. You know how they say you don’t really appreciate something until it’s gone ? Well, that’s what happened with Dynamo Five. I didn’t realize what an impact we had on this city. Leaving is the worst thing we could’ve done. Dynamo Five needs to return. So what do you say ? Are you with me ?”

Bonuses and Limitations:
Sealed Systems was for holding breath only. 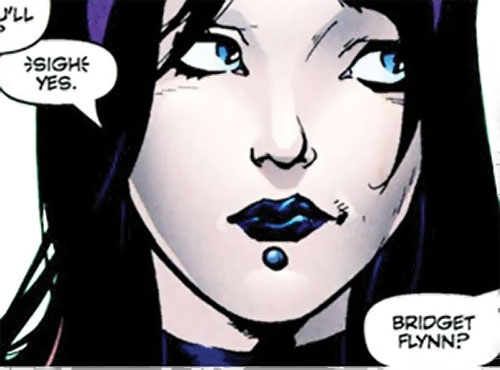 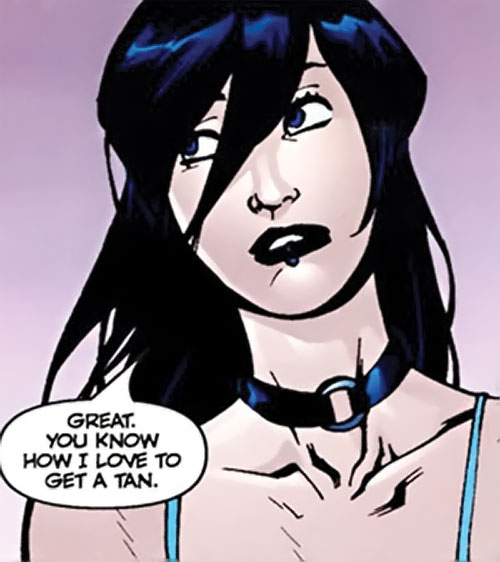 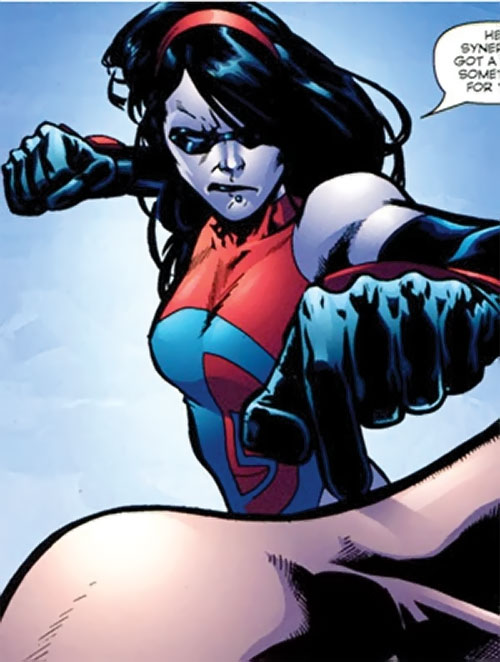 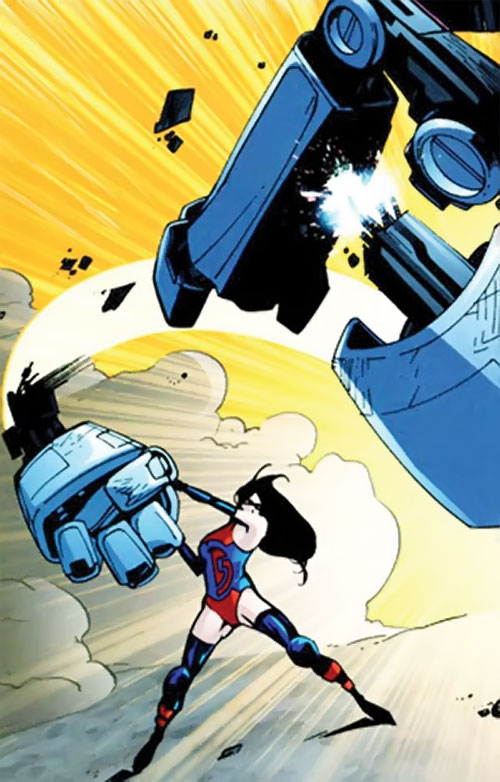