The Scream is particularly fast and agile, and a gifted climber.

He has the ability to wreak havoc with the nervous system and sanity of those around him. His touch brings blind fear and his scream brings searing pain and paralysis. By just being there he can slowly damage one’s sanity. Even superhumans with enormous physical fortitude will be affected, as the effects seem paranormal.

The Scream routinely talks to inanimate object, carrying long imaginary dialogues with them. However, there are instances where the objects actually “tell” him useful facts he couldn’t possibly know otherwise. In DC Heroes RPG terms this is represented by his unique Connection.

What is happening exactly while the Scream rants and raves at kitchen sinks and lampposts is unrevealed. It may be some sort of psychometry.

The Scream once was engaged by Titan, who was hunting for X. Upon seeing a masked man on the rooftop of Arcadia’s waterfront, Titan had assumed it was X.

The Scream appeared in Titan’s life again when he stumbled on another attempt at arresting X. The chaos he caused allowed the X killer to escape the government. 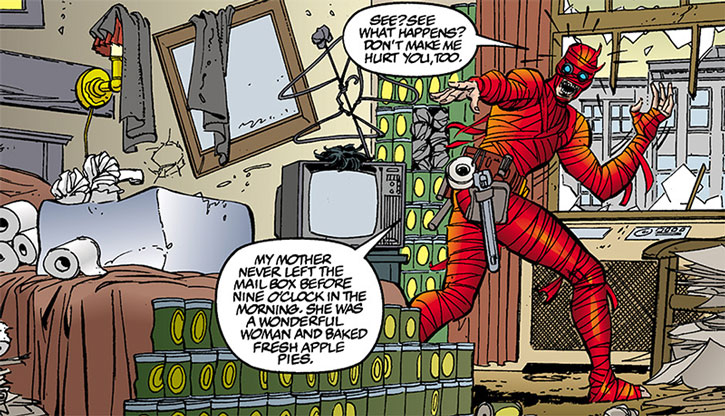 Completely insane, with a behavior that often shifts to violence without much warning. The Scream is only partially coherent and is quite often drooling.

He has textbook paranoia about the phone company and launches into long, rambling discussions with random furniture and objects.

(The Scream is interrogating a kitchen sink) “My mother never left the mail box before nine o’clock in the morning. She was a wonderful woman and baked fresh apple pie.” (pause) “Don’t give me that. You can’t hide behind your pathetic lies ! Your thoughts are like electricity sizzling in my toenails.”

A Joker vs. Scream confrontation is probably too good to pass. Scream might come from the ruins of Blüdhaven, as an oh-so-witty commentary about these story arcs.

Drawbacks:
Catastrophic Psychological Instability, SPI (paranoid, believes the phone company is out to get him and that most people are agents for the phone company), Minor PR (people exposed to him for days will go insane).