For much of her original career, Melissa Gold was Screaming Mimi – a D-list villainess.

Screaming Mimi appeared in 1979 as part of a colourful band of criminal lady wrestlers.

She never had much screen time. Still, a little bit of character development could be squeezed into her scattered appearances over the decades.

In 1997, Ms. Gold had a new career opportunity. She took the name Songbird, became a fan-favourite character in Thunderbolts, and developed under this spotlight.

We don’t yet have a full coverage of Melissa Gold’s career, but there’s already a lot of material.

It’s covered in successive articles, so everybody can read ’em at their own pace. The order is :

Tell me who’s that screamin’

The term “screaming mimi” seems to have originated as World War One slang about German artillery. Then it drifted to become slang about alcoholic stupor.

Then to become about any random occurrence that the term fitted (such as an irate woman).

Gold presumably took her name after the 1958 movie  .

During the 1960s a Marvel Comics Bullpen employee was named Mimi Gold  , but the similarity wasn’t deliberate. 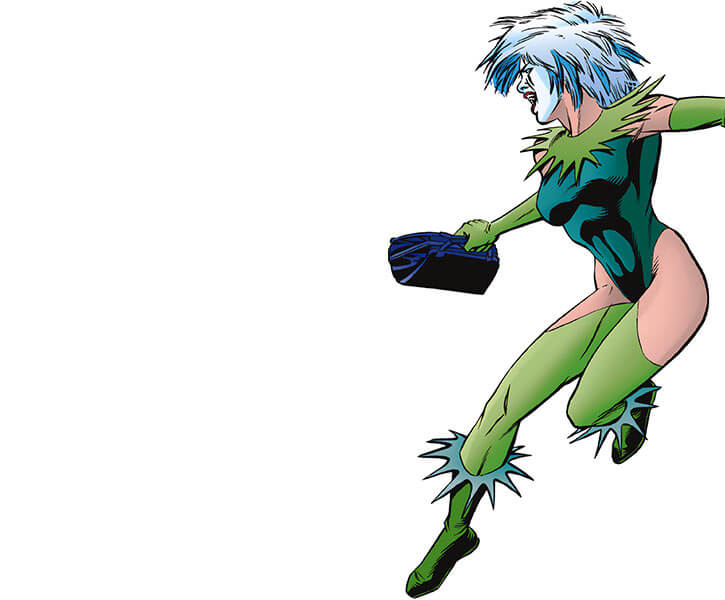 She’s strong for her size and mean in a fight.

Melissa is also reported in secondary sources  to have training in, and experience with, singing and wilderness survival. 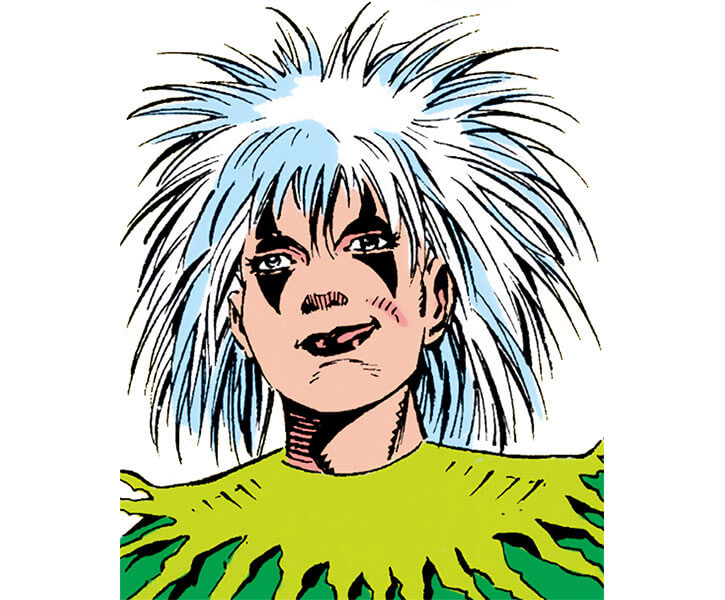 Mimi reportedly benefited from the Power Broker enhancements. These grant a semi-random level of superhuman strength and durability, but grotesquely deform 50% of the subjects.

However, she’s a/ not deformed and b/ never clearly manifests super-strength or durability. So what gives ?

Our hypothesis has long been that she was a “grazing hit”. The process enhanced her strength to the “borderline superhuman” grey zone – rather than making her an outright superhuman.

Furthermore, we postulate that her enhanced strength slowly decayed over the years.

This hypothesis was confirmed by a late 2009 Marvel sourcebook.

Using this secondary source, it seems coherent that she could lift about a ton after the treatment. Then about half that during the bulk of her Screaming Mimi career.

Near the end of her Mimi identity her strength presumably was that of a powerful, large athlete. Not superhuman in itself, but abnormal for a 125 lbs. (57 Kg.) person.

…and much much louder

The brute effect of her scream is equivalent, in decibels, to the noise of a jet engine at five feet (Sonic beam in DC Heroes RPG terms).

Her hysterical screams after Angar’s death could liquefy large trees and pulverise tonnes of granite. This left an enormous crater.

She can yell her head off for up to an hour straight.

Beyond brute decibels, she can sing a specific note. Every note on the scale induces a different effect : 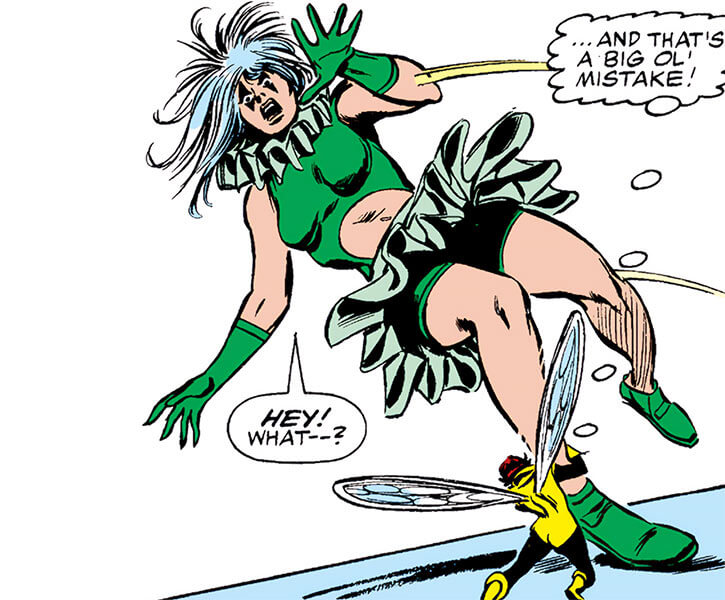 Furthermore, secondary sources have listed the following effects as keyed to the following notes. But they are not demonstrated in her appearances as Mimi.

Something fitting and evoking 1979 would be… mmm… how about Joe Jackson’s debut album’? You’ll need proper bass sound.

Melissa Gold grew up in the Sunset Trailer Park in Soshoni, Wyoming  – population 635.

When she was a kid, her mother robbed an elderly local named Mr. Tollefson. Melissa’s mum was arrested and sent to the state pen.

(In one flashback to this she looks about 8, in another closer to 12. A later Marvel clarification says 11).

Melissa’s previously pleasant life suddenly changed. The other kids kept taunting and bullying her because her mum was a convict. Her father started to drink more heavily. He once hit his daughter since he couldn’t stand little Melissa mentioning his wife.

Later on, Melissa would learn that the robbery was intended to finance Mrs. Gold eloping with another man.

Little Melissa decided that her mum wasn’t truly in jail – and had just left for some mysterious reason. So she ran away to find her. She called herself “Mimi”, after her mother. “Mimi” apparently never returned to Shoshoni.

”Mimi” grew up on the street. It is implied she spent most of her time in New York City, making a living through prostitution. Apparently, she usually said that she was from Boise, Idaho.

To survive, Mel pretended that as Mimi she was an older, tougher, meaner and much thicker-skinned person.

In her late teens, Mimi fell in love with one Mike Brodsky. Mike inevitably turned out to be a criminal. He cravenly framed her when stolen goods were discovered in their apartment.

Distraught, Melissa stuck even harder to her Mimi persona in order not to be crushed by life in prison.

Whilst in the brig, Mimi shared a cell with one Marian Pouncy. Though then serving a short sentence for an extortion rap, Pouncy was better known as Poundcakes, a wrestler.

Pouncy liked the hard, tough and streetwise Mimi. She introduced her to her colleagues when they got out.

The context, history, logistics, etc. of Ms. Gold’s years with the Grapplers are detailed in the team profiles.

Mimi seemingly left the Unlimited Class Wrestling Federation after but a few years.

She apparently became a full-time super-villainess.

Gold was an early recruit of Baron Helmut Zemo. He assembled a small army of super-villains – the new Masters of Evil. She and other early hires chiefly worked on freeing imprisoned super-criminals to join Zemo.

Thus, Mimi and the Grey Gargoyle (Paul Duval) were detailed to bust the new Yellowjacket (Rita Demara) out of prison.

Disguised as a lawyer and a legal assistant, Duval and Gold reached Demara. But she was being interrogated by the Wasp (Janet van Dyne) and the super-mercenary Paladin.

The Wasp recognised Duval despite his disguise. However, Mimi’s scream knocked out most people present. The two villains threw the unconscious Demara in the back of their van, and fled.

Out of the action

Howbeit, the Wasp recovered quickly and blasted out one of their tyres. The crash knocked Gold unconscious and she was captured.

Therefore, Mimi was still in lockdown when the Masters of Evil launched their devastating assault on the Avengers Mansion. She is thus occasionally overlooked when listing the roster of Zemo’s team.

Nevertheless, Zemo apparently considered her as an asset. He would remember her years later for another project.

While held at the Vault super-prison, Melissa met Angar the Screamer. After a mass escape, they teamed up.

They hit Denver, Colorado, with a spectacular crime wave. The pair robbed banks and jewellery stores. As a twist they combined their powers to create the illusion that they were Hawkeye (Clint Barton) and Mockingbird (Bobby Morse).

This plan backfired. Though they presumably expected Mockingbird and Hawkeye to come investigate, they didn’t know that Hawkeye had a hearing condition. This handicap enabled him to ignore much of the sonic effects employed by the couple.

Mimi and Angar were soon defeated. 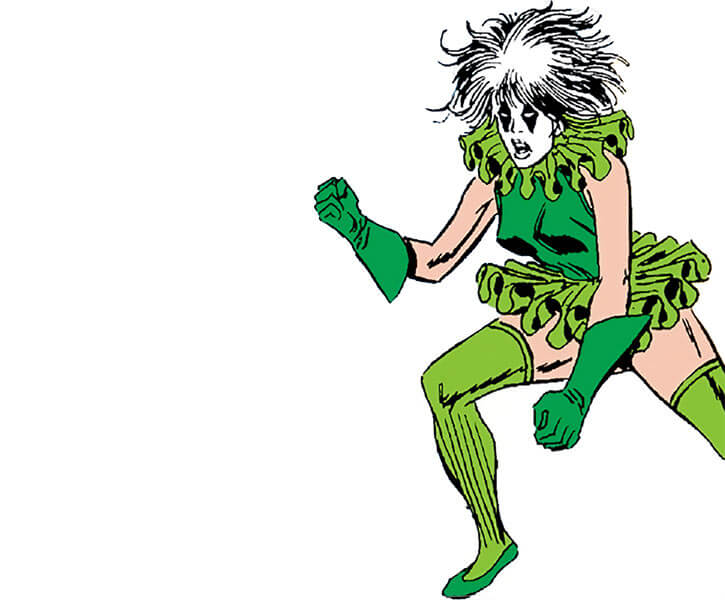 Screaming Mimi was then invited by Superia to hear her pitch for her Femizons organisation. This project was based on the future Thundra came from. On this occasion, Ms. Gold was reunited with Poundcakes.

Presumably, Superia had freed many of the imprisoned super-villainesses, including Mimi, so they could attend.

The pitch was done during a multi-days luxury cruise. As part of the entertainment, talent pageants were organised. Mimi enthusiastically demonstrated the power of her voice, leaving much of the audience with a headache.

When Captain America (Steve Rogers) and Paladin boarded the ship, Gold participated in the pummelling. Both men were ferociously felled by the fantastic flock of felonious femmes.

A good man is hard to find

Mimi, apparently still in a relationship with Angar, later attended the marriage of the Absorbing Man (“Crusher” Creel) with Titania (Mary McFerran-Creel). They were part of a crowd of super-villains.

Wearing her best mini-dress, Mimi joined forces with Angar and Klaw when the Avengers mistakenly intervened. Their joint sonic attack swatted a Quinjet out of the sky. But the situation was soon deescalated.

Screaming Mimi later joined the multiversal super-villain army assembled by Krona. During this cosmic battle, she lost a screaming match against Black Canary.

Mimi continued to work with Angar, in denial over her romance being one-sided. In truth, the Screamer saw her mostly as a partner in crime with sexual benefits.

During one of their heists in small town banks, they got unlucky. Angar the Screamer was hit by a stray bullet from an hallucinating guard. Bleeding out, he died in Gold’s arms.

Shocked and left all alone, Melissa screamed hysterically for over an hour. She devastated a large chunk of the forest around her and wrecked her enhanced larynx.

When she finally collapsed Baron Helmut Zemo, who had been looking to recruit her, whisked her away before the cops could move in. 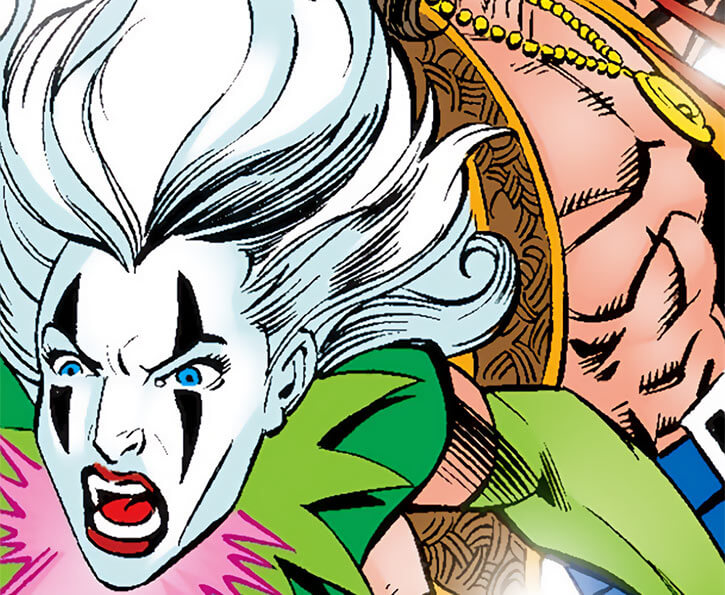 Mimi was the most slender among the Grapplers. Unlike Letha and Titania she’s not obviously a bodybuilder. Perhaps this is because she has not been a wrestler for as long as they have.

Officially she’s 145 lbs.. But given the recurrent descriptions of her being “slim” and “slender”, we adjusted her weight down.

She usually wore a sort of tutu with biking shorts underneath. During the Superia cruise she debuted the costume without a frilly skirt.

Melissa was a blonde girl but became a red-headed woman. This doesn’t seem to be the result of cosmetics. Perhaps her hair changed colour as a mild side effect of the Power Broker process. 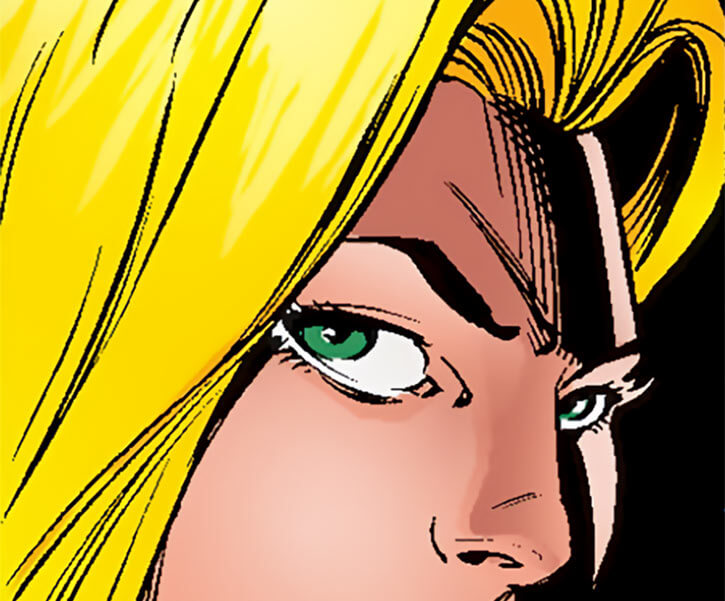 One gets the impression that Mimi talked and behaved somewhat weirdly.

But it is hard to say. During this era she gets little special dialogue or character moments. 98% of the characterisation was created later, chiefly during the Busiek run on Thunderbolts.

Later material states that “Mimi” was tough as nails. She showed the level of brutality and ruthlessness she needed to protect herself on the street.

Melissa, on the other hand, was scared of living her life alone. She was desperate to belong to some sort of group or family.

The difference between Mimi and Melissa wasn’t pathological. It was simply a mental mask that Melissa wore to cope and survive. In fact one can imagine that it is what allowed her to carry on without becoming a drugs addict.

Melissa’s fear of being alone is apparently the root of most of her questionable decisions, particularly in her love life. She’d rather be with a man who’s obviously bad for her than be single. 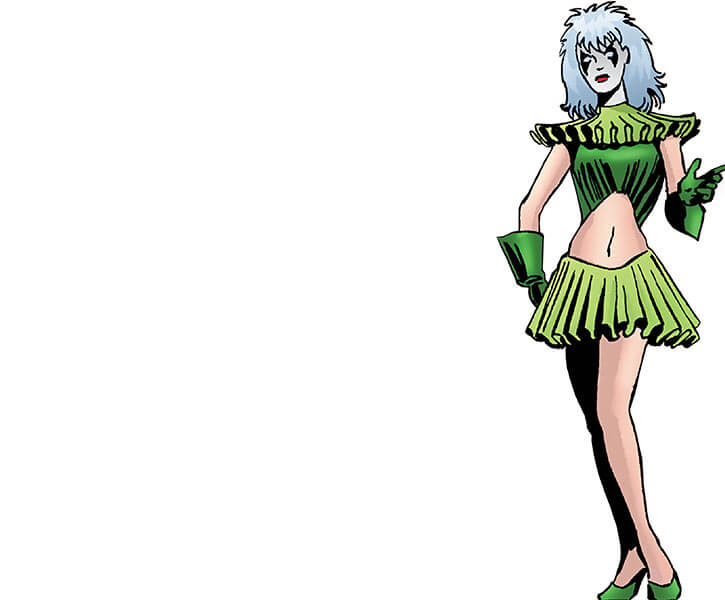 Letha: “Up and away, Mimi darling. I’d hate to see that adorable skirt get scorched to a cinder.”
Mimi: “Mimi moves, Letha. The Lord helps those who help themselves.”

The Grapplers were presumably an homage to the Female Furies of the Fourth World. With Mimi being the Mad Harriet analogue. 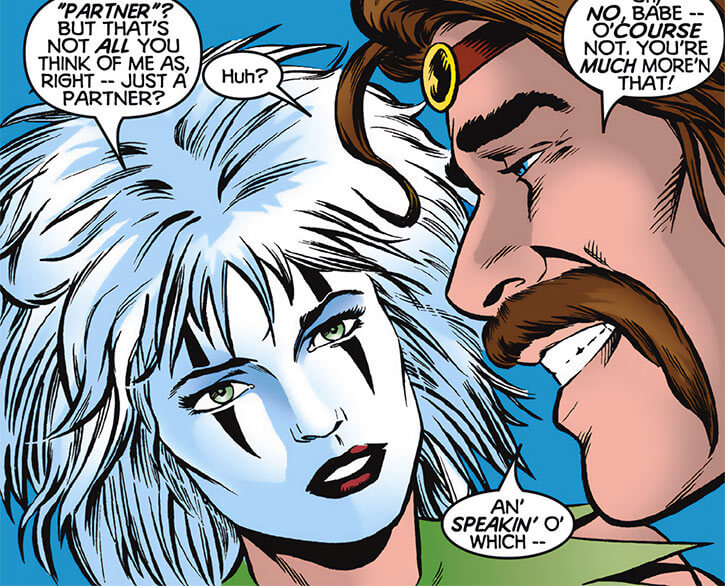 Familiarity (Streetwise, Urban survival, Wilderness survival). Secondary sources have stated that Mimi has perfect pitch (she can hear in her mind the correct frequency for every musical note on the scale).

Mimi has a stock of special in-ear plugs that make allies immune to her scream. However, they appear to completely block hearing.

Before the Power Broker enhancement, Mimi had DEX 04 STR 03 BOD 04.

A STR of 06 is her peak, right after the Power Broker treatment. From there it degraded to a 05 and then to a 04, though we can’t clearly observe that. 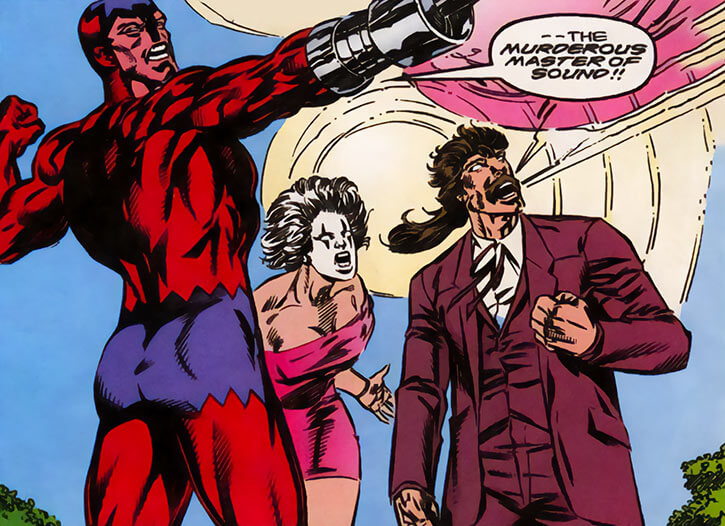 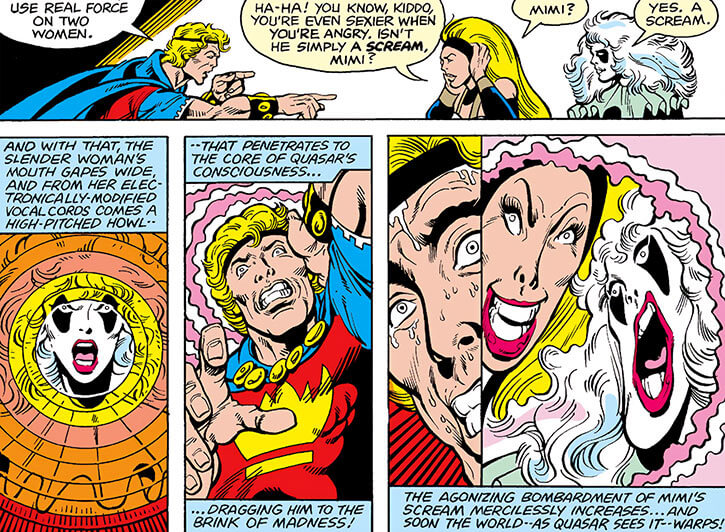 This is after the Power Broker treatment. Her Enhanced STR slowly degraded to 1 rank, though we can’t clearly observe that.

Secondary sources have listed the following effects as keyed to the following notes. They are not demonstrated in her appearances as Mimi, but she could manifest them using Extra Effort.