The Scythe wields a very well-crafted kusarigama. This is a hand scythe with a weighted chain attached to it. He prefers to wrap the chain around his victim’s neck, then close in and stab as convenient. In DC Heroes RPG terms, he’s Grappling using the Extra Limb Power of his weapon.

The Scythe is a master at whirling his weapon around so as to control his opponent’s movements. The goal is to make them hesitate, to keep them on the defensive. In DC Heroes RPG terms this is Charisma (Intimidation).

It is very likely that the Scythe is also a fairly proficient unarmed martial artist.

The Scythe is a mercenary who was after the open contract put on Iron Fist by Ward Meachum. Meachum knew that Daniel Rand would come back to kill him when K’un-Lun interfaced with Earth. He had not only fortified his mansion, but also hired killers to take down Rand — now known as Iron Fist — before he could reach him.

The $10K Meachum offered (in 1974 USD, so about $52K in 2017 USD) drew in a large group of street toughs. Some found Iron Fist, but the K’un-Lun fighter defeated them all. However, a more dangerous opponent, the Scythe, was also after the $10K. After the punks told him about their encounter with Iron Fist, Scythe easily tracked Rand down.

The Scythe dominated much of the fight. That was in part due to Iron Fist being distracted by memories. But Iron Fist eventually pulverised the kama end of the Scythe’s kusarigama. Shocked by this display of power, the Scythe collapsed in a heap and told Iron Fist everything he knew.

The Scythe was drawn as an Asian dude on the cover of the issue, but was White in the story.

A tough-talking mercenary, who keeps calling his opponent “joker”.

The Scythe talks big and talks tough as long as he’s on top of the situation, but when Iron Fist demonstrated unearthly power he collapsed as a pathetic wreck.

“Thanks, joker – for saving me the bother of hunting you down ! Those other punks told me you were in the neighborhood — told me what you did to them — but you won’t have a chance to try your tricks on… Scythe !”

“Hey, you’re good, joker — even better than those muscle-bound morons made you out to be — but nobody can avoid my grapple-ball forever — and joker — that includes you !”

Obvious member of the League of Assassins.

Bonuses and Limitations:
Charisma (intimidation) only has a 0 APs Range and requires the Scythe to actively wield a kusarigama (-2).

Master of kusarijutsu ● 5 points (Easily removable – needs a long chain) ● Descriptor: Skill
– Whirling his weighted chain around his opponent — Affliction 8 (Impaired, immobile), Reach 2, Resisted by Will. Concentration, Quirk (ineffective against a target impervious to his kusarigama). 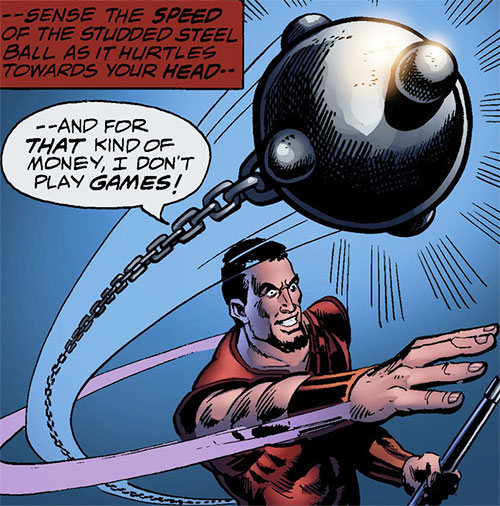