Sean Knight is one of the recurrent characters, accompanying the hero of the piece.

This profile only covers the Mage: The Hero Discovered series. It has S P O I L E R S.

Sean Knight was a ghost and had several of the common attributes one would normally ascribe to one.

Sean could become intangible (wholly or partially) at will, passing through all known physical substances or allowing physical objects to pass through him. With concentration, he could also emit waves of pure fear and/menace from his entire body. This affect was so visceral that both normal mortals and supernatural creatures alike would do all they could to leave his presence.

Sean’s ghostly nature also gave him a certain degree of control over electrical impulses (allowing him to exponentially increase the output of existing electrical sources that he was in contact with) as well as the ability to travel between the Faerie realm and the mortal plane.

Finally, Sean was stricken with the Sight; a rare form of clairvoyance that most often warned him of imminent danger to himself or his allies.

In life, Sean was a public defender and was therefore familiar with the Law.

As a ghost, Sean’s brain no longer used electro-magnetic impulses to operate. It was due to this fact that Sean lost not only his long term memories, but before his untimely demise began to lose his short term memories as well.

Sean Knight was a public defender attorney. He died in the 1950’s as a result of a undiscovered gas leak. His passing was so peaceful that he never realized that he had died. As a result, his spirit continued to carry on his duties as though nothing had ever occurred.

On the night that Kevin Matchstick was arrested for disturbing the peace at a football stadium, Sean was assigned his case. Ever dutiful, Sean spent the better part of the night learning as much about Kevin as possible. While he was doing so, he suddenly noticed that an unnatural silence had surrounded him.

When he looked up he realized that the entirety of the police station stood frozen in place. No one even blinked an eye except for Sean and two men that casually sauntered out of the cell block. One of the men was Kevin (who Sean recognized) the other was the World-Mage, Mirth.

Unbeknownst to Sean, the unnatural stillness that surrounded him was the result of one of Mirth’s spells.

In an effort to protect himself, Sean brandished a loaded handgun at the two and demanded to know what was happening. Kevin started to explain what was happening to Sean when a trio of Redcaps (led by the Grackleflint Lazlo) attacked them. Sean could only watch with fear and confusion as Kevin and Mirth easily defeat the Redcaps. With the Redcaps’ defeat, Mirth turned his attention back to Sean.

During the battle, Mirth had noticed that Sean had been shot with several “elf-bolts” but was completely unharmed. With this in mind, he confronted Sean with the idea that he was a ghost while leading Sean and Kevin out of the police station. While Kevin took the information in stride, Sean was initially doubtful.

It wasn’t until Mirth confronted him with the utter lack of memory (due to the fact that his ghostly nature interfered with the normal electrical operation of his brain) and forced him to demonstrate his abilities that Sean finally believed him.

With his old life gone, Sean was easily convinced to aid Kevin in his quest to defeat the Umbra Sprite. Soon thereafter, Sean found himself (along with Edsel) in Kevin’s apartment. There, another attack by Stanis (using a Leanhaun Sidhe) forced Mirth to accept the fact that it was his magical nature that was allowing the Umbra Sprite to find them.

In that moment, Mirth came to a startling realization. Even though he had to leave Kevin, Sean would act as Kevin’s guide in his place. He had a strategic mind, was gifted with the Sight and better still, he was completely off the Umbra Sprite’s radar.

After Mirth left for the Faerie realms, Sean used his Sight to set up a series of ambushes over the next few weeks. Time and again, Kevin and Edsel attacked the Grackleflints while they searched for the Fisher King. In the aftermath of one of their attacks, Edsel found a laundry ticket. Sean used this to ferret out the Grackleflints base of operations, The Styx Casino.

Sean led Kevin and Edsel into the Styx that very night. The three attempted to find the Grackleflints and their master, the Umbra Sprite, and deal them a final decisive blow. The three split up to explore the casino after agreeing to meet up after an hour. Sean spent the majority of the hour playing baccarat where he encountered Lazlo in disguise (though he initially did not realize it). 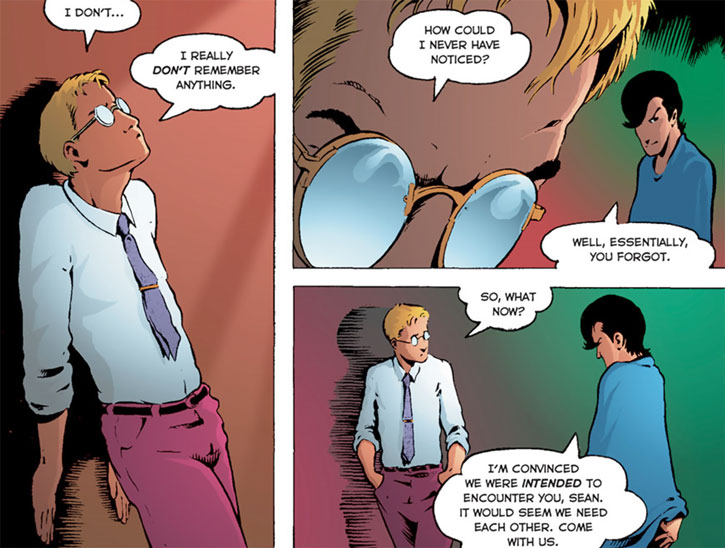 When the hour elapsed, Sean returned to the rendezvous point where he found Edsel waiting patiently for him. Kevin however, was late. They two waited for half an hour before they came to the realization that he had been captured.

While they waited, Sean had puzzled out that the five identical pit bosses at the Styx were the Grackleflints in disguise. He e and Edsel captured Piet the Grackleflint and forced him to lead them to Kevin. They arrived just in time to save Kevin from the Sprite, but couldn’t escape the casino before Kevin had been poisoned by Emil the Grackleflint.

Going into the Light

The three friends fled the Styx to the only place of safety they knew, Sean’s apartment. Upon realizing that Kevin would perish without Mirth’s intervention, Edsel left to summon him leaving Kevin’s life in Sean’s hands. Seconds after she raced away from the apartment, Sean had a sudden fit of the Sight and understood that his end was near.

Grimly, after barricading the door, he went outside to face the remaining Grackleflints who had followed him home. Sean attempted to scare the Grackleflints away, but they had brought someone even more intimidating with them; Cromm Cruich the Dragon.

Though Sean gave his all, he was easily overpowered by the venerable dragon. Cruich took his time and tortured Sean for several moments before finally immolating him and sending Sean to the eternal rest he had earned.

Sean’s sacrifice was not in vain. His delaying tactic bought Mirth enough time to arrive with Edsel and spirit Kevin off to safety.

Sean was a relatively average looking Caucasian male. He was tall, and reed thin. He had short blond hair, a pointed nose and wore a pair of round spectacles that obscured his eyes. He rarely smiled, and stood about with a business like manner. He could often be seen pushing his glasses back up his bridge of his nose.

Under normal circumstances, Sean could be found dressed in a pair of dress pants, a white shirt, and gray tie.

Sean was a quiet, serious man. For a short time he provided a cynical, disbelieving voice that counterbalanced Mirth’s optimistic one. As he was exposed to more and more of the weirdness that surrounded Kevin, he quickly became a believer and provided direction to the group once Mirth had to leave it.

Outside of his loyalty to Kevin and his quest, Sean has few “strong” character traits. This is most likely due to the fact that he suffers from an ever worsening case of amnesia which has robbed him of his past. Before his end, his memory had degraded to the point where he had some of the traits one would find in an individual that suffers from Alzheimer’s Disease.

His short term memory was virtually gone; he had a hard time remembering any recent events without being prompted or intense effort.

“Now, give me a break, here. Fifteen minutes ago you convinced me I’m dead. And now you want me to break out the sheets and chains. I just don’t think I can give that much.”

“My memory’s been getting worse. Stray things … and I can’t remember them.”

Bonuses and Limitations:
Charisma (Intimidation) is a powered Skill (-1).