These very old notes are simply representing the stats for this set-in-the-1940s bad guy, as the relevant Mayfair Games supplement had become hard to find. It’s thus not a full profile.

He’s also extremely strong, and his claws can tear through metal.

He’s a sea creature, and most at ease within that environment.

Axis Amerika was a team of costumed agents engaging in subversives activities in the United States during WWII. They acted on behalf of the Axis powers (Nazi Germany, Fascist Italy and Imperial Japan) and were among the principal opponents of the All-Star Squadron.

Adolf Hitler conceived the idea of Axis Amerika, and it was intended that the team would include representatives of each of the three main countries of the Axis. However, Tsunami, who was intended to be Japan’s representatives, changed sides and became a member of the All-Star Squadron. She was later replaced by Kamikaze.

Has been described by Iron Munro as “not too bright, and he might have the biggest head in Nazi Germany” and by Tsunami as a “pig”.

By Ray Winninger for Mayfair with upgrades by Sébastien Andrivet. 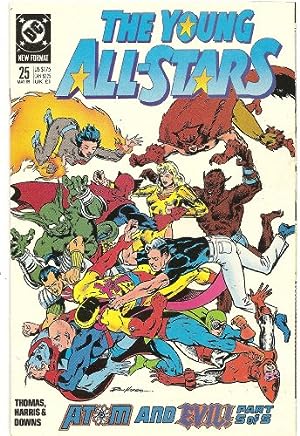