The Seekers seem to have good reflexes and agility, and are well-disciplined. They did not seem to speak any Earth language or to have any special familiarity with Earth cultures, and were visibly uninterested in interacting with primitives.

The Seekers are equipped with high-tech gear. Their staff topped by the symbol of their god seems to house the more power-hungry systems. It presumably routes information to the Seekers’ goggles.

The staves can fly (carrying the Seeker along), project powerful heat beams, and scan for distinctive energy traces. The heat beams are powerful enough to one-shot armoured vehicles, and could quickly burn through armoured concrete with three Seekers combining beams.

The Seekers are usually cloaked by an invisibility screen. It also seems to make them silent, and can be maintained in flight.

Their goggles also hold scanning equipment. With adjustments it could be used to see Ghost (Elisa Cameron) after the staff had picked up that there was *something* there.

Seekers are also protected by defensive screens. Several Seekers can have their screens reinforce each other’s if they’re grouped up. A trio of Seekers operating like this was proofed against machinegun fire.

However, Ghost could bypass them by phasing  through. And they offered little protection against a large telekinetic discharge from Motorhead (Frank Fletcher). A military laser cannon could also damage a pair of Seekers, but visibly needed a high roll to do so.

One older female in charge, Master Jeqon, had psychic powers. These allowed her to speak in the dreams of humans (and presumably other creatures). The range seemed limited to a few dozen metres, but the memories of the dream remained clear upon waking.

Jeqon’s strength was clearly superhuman (perhaps a 09 in DC Heroes RPG terms) and she was durable enough to withstand a .45 ACP pistol emptied point blank in her face, though it dazed her and weakened her.

Jeqon was clearly more powerful than the Seekers working for her, and was also considerably more intelligent and courageous.

The Seekers are an order of space soldier-monks, who act as scout and trackers. They serve an alien multi-species space empire called the Reaver Swarm.

The Dark Horse Heroes books were cancelled before much could be learned about the Swarm. The name doesn’t sound too benign, and it was stated that the Swarm would rather unilaterally destroy Earth than let uncontrollable, extremely destructive technology be developed there.

On the other hand, the man whom the Seekers were tracking down was also hunted by Nexus (Horatio Hellpop), which means that he was a particularly awful mass murderer.

The Seekers appeared on Earth in 1993. The person they were hunting was one Zolot the Deconstructionist, apparently a mad scientist. Zolot hid on Earth in 1931. He had been working on ways to defend himself as he knew that the Swarm would find him sooner rather than later. 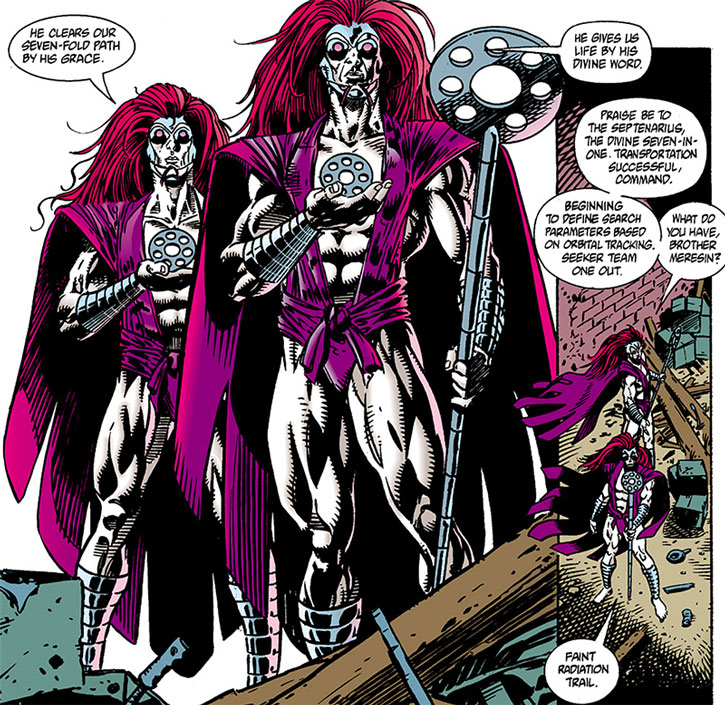 However, a 1947 nuclear test accidentally destroyed his base and turned into into a transdimensional energy warp called the Vortex.

In 1993 the mad scientist, deeply altered and now known as the Man from the Vortex, emerged from the warp and resumed his work. This pinged on Reaver Swarm scanners, and a Seeker ship was sent to Earth to investigate.

Operating in teams of two and using invisibility screens, Seekers on the ground could perform much more precise scans than from orbit. They thus discovered numerous fainter traces of Vortex energy. These corresponded to people who had become superhumans since the 1947 explosion.

The Seekers were taken aback. They had been expecting mundane and relatively low-tech humanoids, and investigated the superhumans as they tracked down the fugitive.

The investigation didn’t go too well. One scout was killed by Ghost after he attacked her when he realised that she could see him. A team was killed by Motorhead. However, the data allowed for locating the Vortex under a large US military base.

A team of three Seekers entered the Cinnabar Flats military base. But a guard dog smelled them. The Seekers attacked the troops with their devastating heat weaponry while being protected by force fields. Burning through the military, they reached the Vortex proper – but their scans briefly opened a breach, through which a demonic dragon escaped on Earth.

The dragon was later dispersed by Hero Zero, and its component demons killed by King Tiger.

The Man from the Vortex

Undaunted, the fanatics continued their scans. Predictably, they only succeeded in providing the Man from the Vortex with a way back to Earth. All three Seekers died fighting their quarry, who was immensely more powerful than before he was absorbed by the Vortex.

But the ship had already summoned to Earth a planet-destroying robot of the Swarm.

The Seekers, men and women, look very much like athletic humans. But they all dress the same and have the same goggles, making them difficult to distinguish if differences in gender or age are not present.

The Seekers are religious zealots. Nearly every report they make to their superiors is laced with ritual phrases about the Septenarius. They seemed to generally hold human beings in contempt, and to act superior and threatening as they were convinced of their superior righteousness.

They generally talk in a chopped, military manner. The Seekers follow rigid protocols, which allow for a lot of leeway in eliminating locals – including anyone who can somehow perceive a Seeker. The military-like demeanour is less true among the more devout Seekers, who seems mostly concerned about the purity of faith of their colleagues.

Seekers call each other “brother” and “sister”. They reported to Master Jeqon – who commanded six Seekers and a spaceship.

“He clears our seven-fold path by His grace. He gives us life by His divine word. Praise be to the Septenarius, the divine Seven-In-One.”

(Observing Ghost) “By the Seven Heavens, the creature is currently phased outside the rectilinear confines of the baseline domain !”

Seeker 1: “I begin to suspect that our search may be for naught, Brother Thammuz.”
Seeker 2: “Pray that the divine Septenarius forgives your recreancy, Sister Byleth. Ask the Septenarius for stronger resolve, that you might be the instrument to bring the Unholy down.”

“Brothers, behold the heretic ! Be not fooled by his changed appearance ! Although some readings seem anomalous, the basic signature is not changed. This *is* the enemy ! Invoke the ritual of damnation and destroy him utterly !”

Since much of their background remains unrevealed, the Seekers have a generic quality and can be used as alien scouts in practically any context.

Drawbacks:
Many have an Irrational Attraction toward Serving the Seven-in-One.