Seekers are a sort of lifelike alien giant octopus robot. They “swim” silently in the air.

Their tentacles are powerful. Only the most extraordinarily strong persons have a chance to break their deadly hold.

Seekers can emit a large cloud of fine mist that soon covers the battlefield. In this mist, their skin acquires extraordinary camouflage properties, making them essentially invisible. The mist will only remain active for half a minute, but this is usually enough for the Seekers to work.

Seekers usually release their mist right away then glide toward the most isolated opponent. They then appear from nowhere and strangle that person to death.

Seekers usually operate in pairs, but will pick separate targets.

In practice, they’ll tend to go for support and command personnel. This is presumably their whole point, and human soldiers have called them “Seekers” due to this hunter-killer behaviour.

A trained and ready force can deal with seekers. The XCom immediate action drill upon contact with Seekers eventually became: 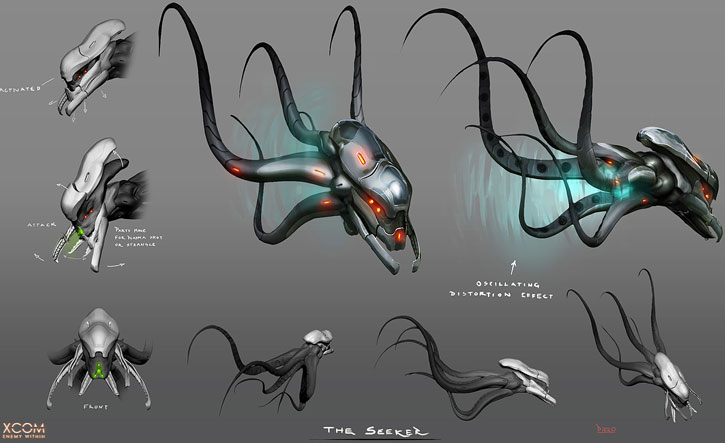 However, one 1/ has to know exactly what to expect and 2/ has to endure the “psychic static” alien aura (which requires specially selected and trained troopers).

Furthermore, Seekers are usually mixed in with other alien troops.

In practice, XCom commandos are probably the only ones who can reliably pull that trick.

The XCom project eventually developed special additional armor plates that make it impossible for a Seeker to strangle the person. But these are cumbersome.

Seekers appeared relatively early during the alien intrusion, in April. They gradually faded out as the conflict intensified. 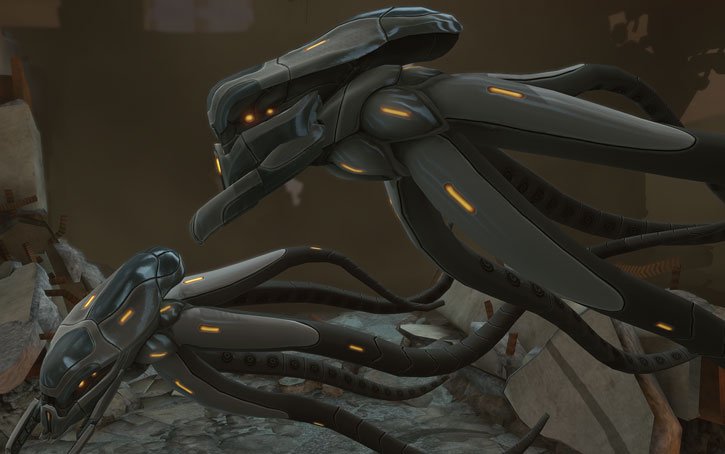 Apparently they are closer to probing scouts than to main battle units such as mutons or cyberdisks.

Seekers look very much like alien living creatures. Especially since visibility is usually execrable, psychic static encourages light hallucinations and they move in a highly fluid manner thanks to highly advanced micro-motors. 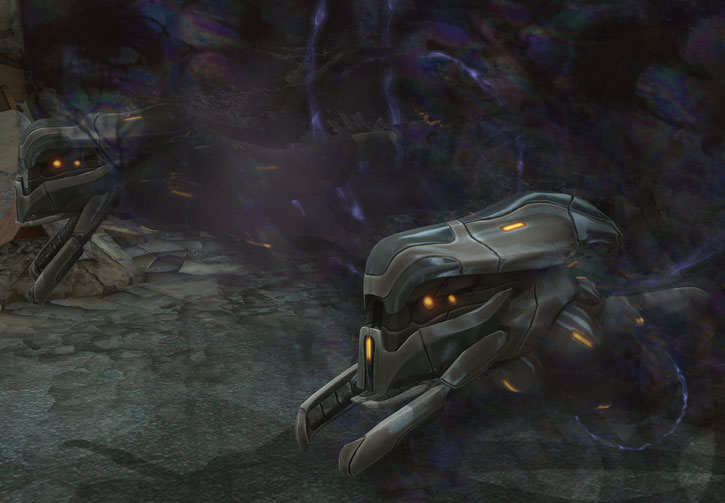 Advantages
Misc.: The Energy blast built-in gun is shattered when the seeker dies.

Drawbacks:
Misc.: Seekers are probably not sapient , Misc.: Given their morphology, shooting a Seeker off somebody they are Grappling/Wrestling is not normally a Trick Shot.

Like all aliens, seekers emit “psychic static”. This is our proposed rationalisation for certain XCom gameplay conceits.

See the entry for Thin Men for an extensive discussion of those. And our XCom setting article for in-universe explanations.

BODY 05 assumes light use of Hero Points so assault rifle fire will kill a Seeker in 2 bursts.

Evasion to represent their evasive ability whilst in the air. 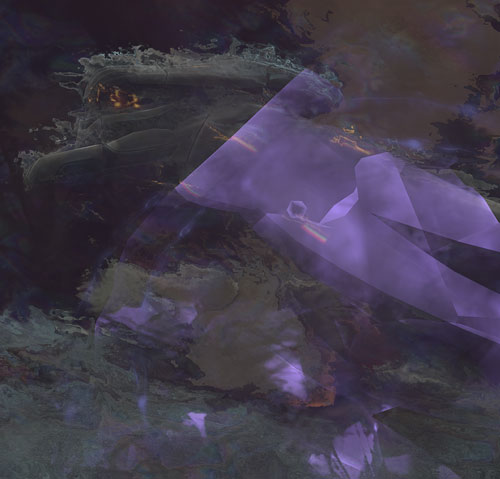