The Mark II class Sentinels was apparently the most powerful and nearly invincible Sentinels yet devised. In designing the Mark II Sentinels, Larry Trask added various weapon systems to the robots that the original Sentinels lacked.

Moreover, he designed the Mark II computer systems to that the Sentinels could instantaneously analyze whatever opposing force or combatant they encountered. They would then rapidly adjust their mode of attack to cope with it.

This factor made the Mark II Sentinels extremely hard to defeat. But they were not indestructible, nor could they contain weapons systems capable of dealing with every possible danger to them.

Mark II Sentinels possessed vast strength and could fly via jet propulsion units in their feet. They could project strong tendrils, powerful force blasts, and jets of knockout gas or steam from their palms. In addition, they had, like all other models, sensory functions enabling them to detect mutants at short ranges and communicate with other sentinels by radio.

Their computerized memory may include massive amounts of data on wanted mutants and other beings. Trask also made the logical circuits and AI more powerful than in any other XXth century model.

The Sentinel Mark II class was designed and constructed under the supervision of Lawrence ’Larry‘ Trask after his father’s death. Some Mark II Sentinels, such as the “leader” Number Two, were constructed from the remains of some of the original Sentinels. But many new ones were also built.

Larry Trask wrongly blamed the X-Men for his father’s death. He was determined to have the Sentinels capture and imprison them and all other known superhuman mutants. When the robots attacked, they proved nearly invincible.

The plan gets derailed

However, when the medallion that his father gave him to suppress his mutant abilities was removed from Trask’s neck, the Mark II Sentinels realized that Trask himself was a mutant. No longer having a human master, the Sentinels captured Trask and became their own masters.

The X-Men succeeded in destroying several Sentinels. They then finally convinced Number Two that the Sentinels should seek out and neutralize the principal cause of human mutation, rather than mutants themselves. Number Two led the remaining Sentinels off towards the sun, the source of most mutation-inducing radiation on Earth.

But while orbiting the sun, the Sentinels concluded that since they lacked the means to destroy the sun, the mutant problem had to be attacked by other means.

The solar heat and radiation somehow caused Number Two to become capable of killing humans in order to safeguard the Sentinels’ overall goals. It also somehow developed the ability to create space warps. Number Two led the Sentinels back to Earth where in the Great Australian Desert, they devised a means of triggering and controlling solar flares.

The Sentinels intent was to create a solar flare that would sterilize all of humanity. This would prevent mutants (and normal humans, as well) from being born. The Sentinels would then artificially create a new human race that would be incapable of mutation.

The Avengers halted these plans, and all of the remaining Sentinels were deactivated or destroyed, and buried within a mound in the desert. In the course of all this, Larry Trask was killed, although he would later return in the form of Master Mold.

The Sentinels are huge (20 ’), humanoid robots. They have all the appendages of the human anatomy and actually look like a big human clad in a massive exoskeleton .

Sentinels are advanced robots and do not really have a personality. One could really write N/A here. However, it should be known that they give the impression of being constantly analysing and evaluating combat situations. They speak aloud all their observations, warning the opponent in the process, with a fearsome, cold metallic voice.

They behave as programmed which usually is either kill or capture their mutant prey. When damaged or destroyed they often go “Squee !” or “Warning ! Warning ! This unit is severely damaged !”. 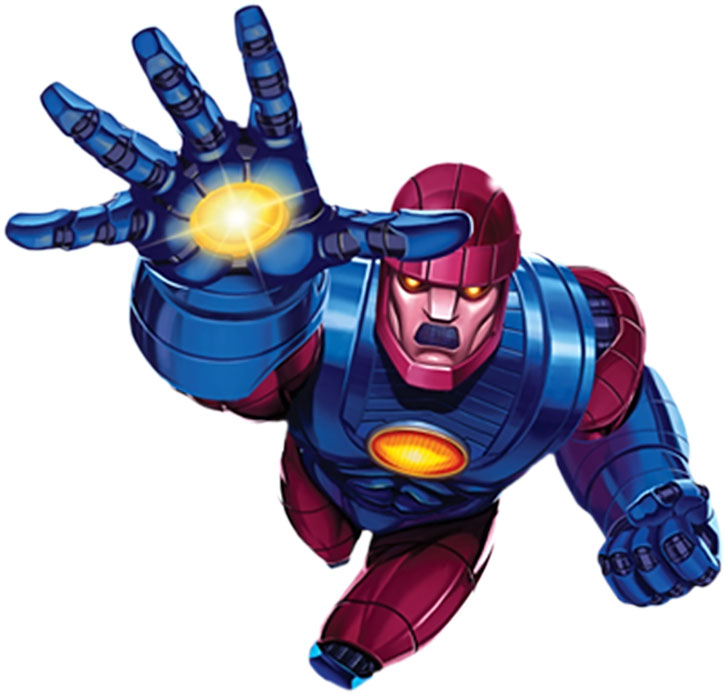 It’s logical to assume that once a Sentinel has been around for a while it begins to learn, experience and grow beyond its’ original programming. This is best represented by letting it raise its’ mystical attributes and decreasing the severities of its’ IAs and thus increase its’ self-awareness through Hero Points  gained by experience.

This seems to be the way they grew to become their own masters in the future. Thus came with the realisation that humanity was best protected while under their total supervision while all superbeings were being eliminated.

All Sentinels have programmed parameters hindering them from endangering human life. In Trask’s models this parameter appears to have been somewhat flawed since by using spurious logic the Sentinels were able to avoid the true intent of that parameter. In addition, Number Two probably reprogrammed the rest of the Sentinels after he received his own free will.

The most recent Sentinel model that was used during the Onslaught affair definitely didn’t have any such parameters active.

The fame of Sentinels originates from the “Days of Future Past” storyline, a dark and gritty futuristic setting. The approach of the Sentinels should be a big deal for the player characters. It could be interesting to oppose the players with Sentinels of various classes so that they never know what to expect of their newest opponents.

Second, using the “Days of Future Past” angle, the Sentinels could originate from the future of the despot Monarch of “Armageddon 2001”. After all, Monarch’s armor resembles that of a Sentinel, and he was hunting and exterminating heroes in the future.

Perhaps Monarch was a depowered Captain Atom (*always* take the opportunity to keep Hawk out of the armor…) who needed a robot army to do his dirty work.

At the end of the event, the Captain Atom Project perhaps gears up to *fight* Captain Atom, including the production of an army of robot warriors, which Nathaniel subverts and controls. Third, in “Our Worlds at War” the Sentinels could replace the “Imperiex drones,” and increase dramatically in number.

All you can eat

Lastly, it is, of course, possible to combine all of these things into one idea if that makes any sense. The Manhunters designed the original Sentinel drawings from obtained notes on early Imperiex drones and their design would be the first real models (say MK I-III).

Later, Monarch used the Manhunter notes to build his improved models (say MK IV-V) and then, when the alien race that had made the original notes attacked Earth, they introduced the Imperiex model (say MK VI or Omega). The players could thus face escalating opposition as the years go by as they participate in various cosmic events.

The Ultimate Hunters of Mutants

The MK II Sentinels, Larry Trask’s masterpieces, have considerable capacity to quickly learn from their mistakes and then bring down any target. Their learning program (Power Reserve) is very useful in combat situations enabling them to calibrate their offensive capabilities towards a given target in just 3 phases (-1).

As if this wasn’t bad enough, this generation of Sentinels can also immediately adapt to any incoming attack, building up a defense against that particular type of attack, also in just 3 phases after initial attack (-1).

To make them into the ultimate killing machine, information on how to adapt a defense against a given mutant is continuously reported by internal radios to fellow Sentinels so that they too can reap the benefits of this defense.

Since the MK II Sentinels increase their attacks capacity after a few phases, plus make themselves impervious to most attacks, they are often refered to as the most deadly class of all the sentinels. The only way of bringing them down is to do it immediately before they can adjust to circumstances

Naturally, Trask being the evil genius that he was, is constantly upgrading his sentinels so the next time the Players face a group they might have been upgraded by some new, additional Powers or Omni-Gadgets (with some HPs) in addition to the above abilities. The Sentinel robots possess superhuman strength (STR), endurance (BODY) and agility (DEX)

All Sentinels are outfitted with the latest in mutant-scanning technology (Detect) and tactical-analysis software (INT). Simply by observing a target, they can devise the best means of capturing or eradicating it. If their initial attempt falls short, Sentinels assess all available data to formulate superior tactics (Power Reserve; Defensive Adaption).

The massive robots deploy a vast arsenal of weapons in their pursuit of their mutant targets (Knockout Gas), including jet-propulsion units (Flight) and wrist-mounted blaster arrays (Energy Blast). 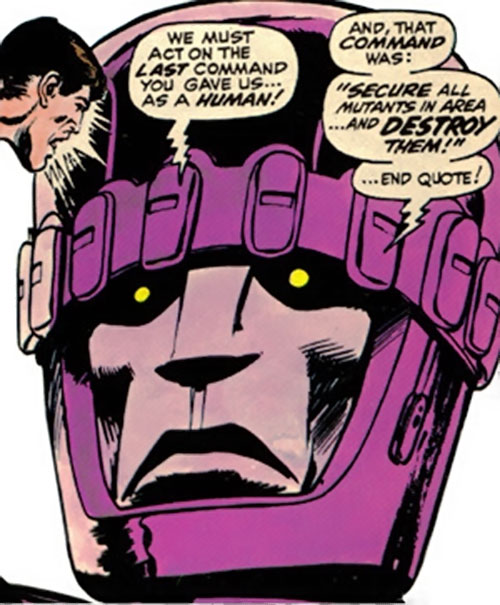 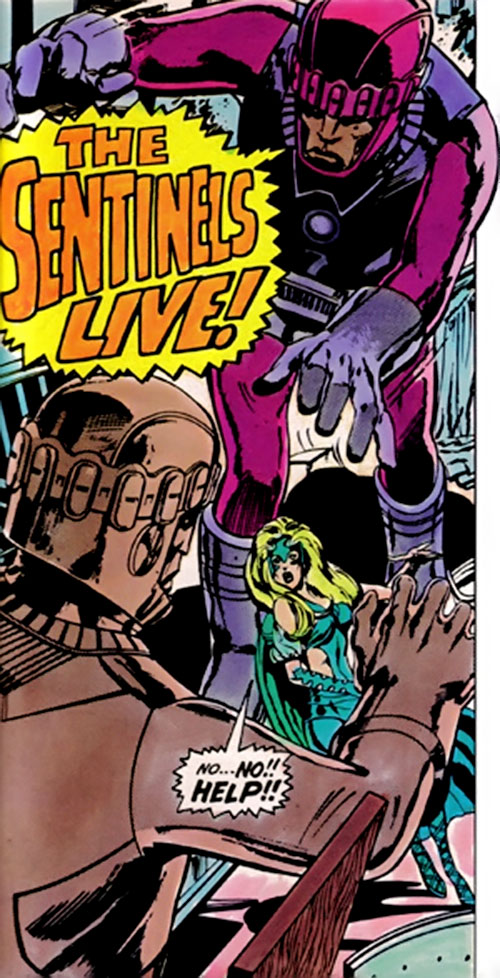 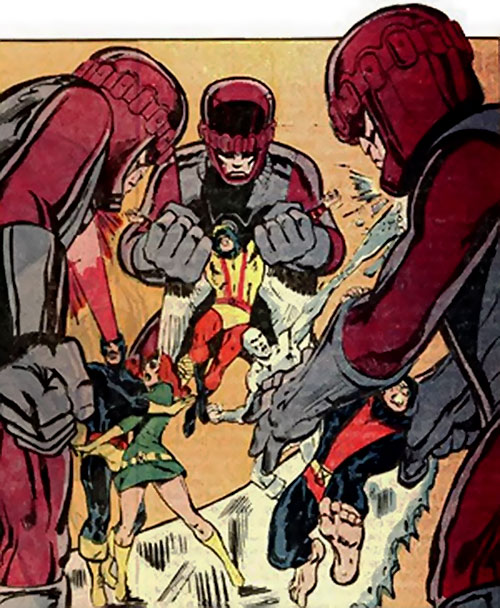 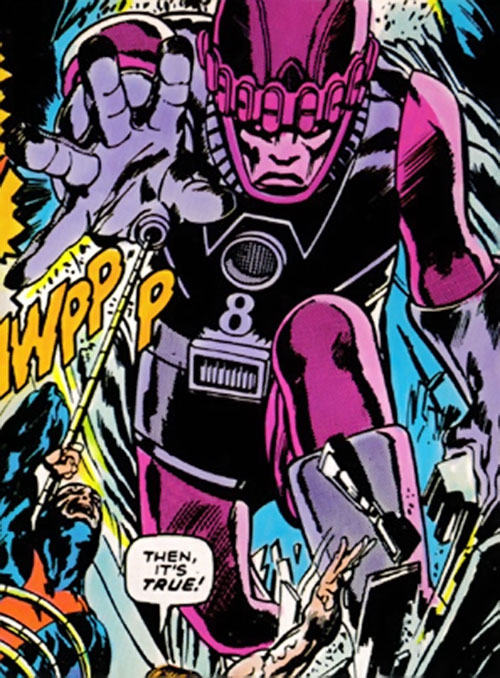 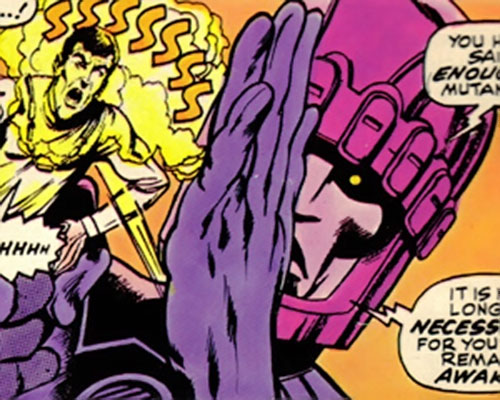