Seoul is a mistress of the martial arts. She ws seen parrying bullets with her staff, or outfighting several armed men with ease. 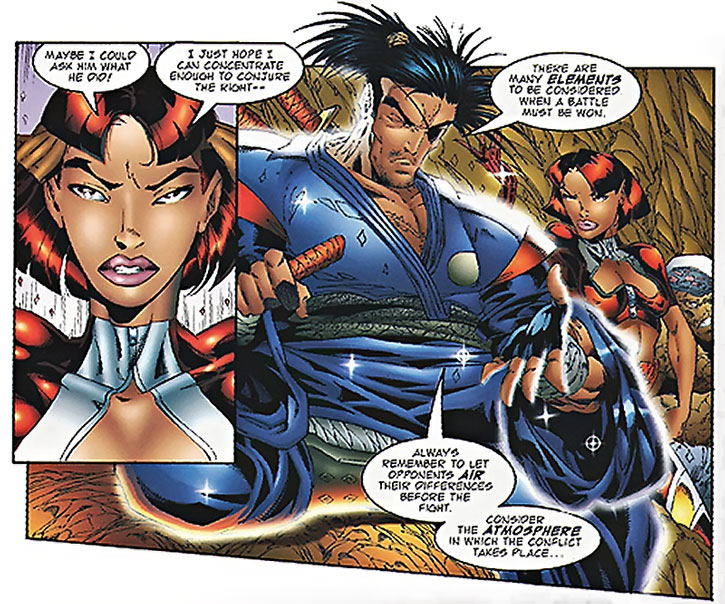 She also has a strange asset. Seoul can call up the spirits of great warriors of the past (apparently always from Asia, such as samurai or great Chinese strategists).These will give her pointers on beating her foes.

The spirit warriors appear by her side and seem quite real, even to Wylder’s enhanced senses. However they require great concentration to maintain, and have never been seen to act. There may be more to them, however. Frex it was stated that Seoul’s martial prowess was also developed by sparring with these warrior spirits.

Seoul has been described has “custodian of the lost warrior spirits of the east” by Wylder. But it may have been a joke rather than an actual indication of her role.

The Bloodpool project was certainly not the finest moment of the US government’s special projects involving superhumans.

About 20 nu-gene active teens were recruited from their families, prodded, tested, operated on, genetically and cybernetically enhanced, and subjected to a dangerous and gruelling training. The promise was that they could one day join the prestigious Youngblood action team. Youngblood was both a powerful combat force and an efficient media tool for the government.

However, Youngblood’s director Graves was discovered to be a demon. Which was an issue. During the upheaval, the new director, Battlestone, decided to forego the Bloodpool contracts. Despite all the promises and all they had been through, the Bloodpool subjects were downsized.

A few trainees (Task, Psilence, Wylder, Fusion, Rubble, Seoul) chose to follow the advice of one of Seoul’s spirit guide. With the support of former Youngblood leader Shaft, they struck on their own as a private, hero-for-hire outfit.

An early, lucky meeting with a millionaire in an unfortunate situation bankrolled them. And thus the group, which kept the Bloodpool name, soldiers on. 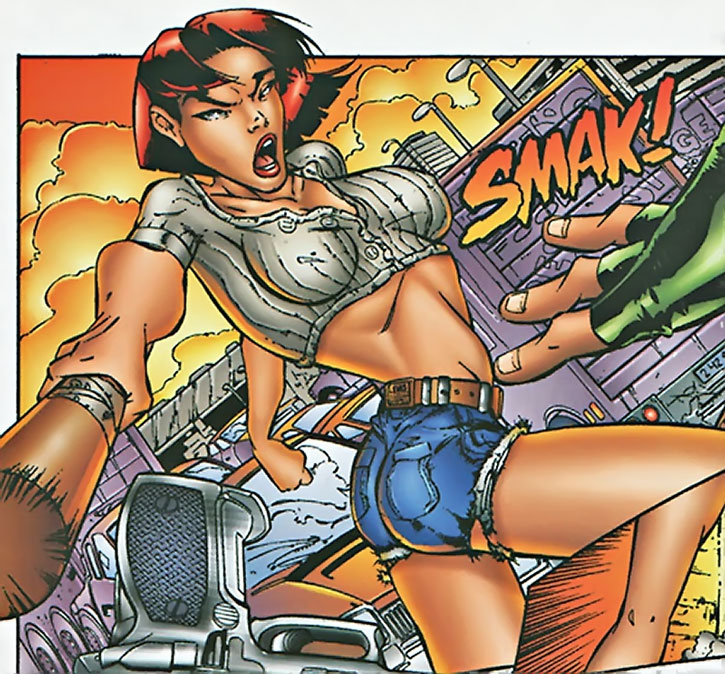 She’ll get back into teenager mode as soon as the tension recedes.

She has a strong aversion to insects, to the point of having once struck Wylder for holding a spider out to her.

“We can bill you a flat fee, or would you rather hear our hourly rates ?”

Bonuses and Limitations:
Her Scholar only works when her Power Reserve is activated (-5pts).

The spiritual advice is represented by Power Reserve (WIL) and a broad Scholar, since it can be broad and strategic (such as being advised to create a team with the others). Be generous as to which situation the Scholar from the spirit advisers can apply.