As Sepulcre, Jillian’s powers seem stronger and more offense-oriented than before. For instance, when in shadow form she can turn her hands into giant claws, elongate her arms, and has a degree of super-strength. Her overall power output and resilience are noticeably higher.

During her 2007 appearance, Jillian had a Sepulcre costume in her wardrobe rather than creating one out of shadow stuff. She also preferred to wield darkness while remaining in human form. For instance, rather than be in shadow form and elongate her arms and enlarge her hands, she’d grab people using shadow tendrils summoned from her human hands.

Woods could instantly put her costume on, though. Perhaps it is stored in her shadow. These small changes are probably caused by her preferring to remain in organic form as much as possible for psychological or mystical reasons.

Woods seems to have become a competent occultist. A possible explanation is that she’s always been good but didn’t use her skills much since Dr. Druid was around. She can do research, enchantments, scrying, find and use artefacts, etc. though this seems to be slow investigation and research work.

Woods’ confrontation with Druid did not go anywhere. He convinced her to stand down, probably through mental influence, as he needed urgent help against the ancient demon Slorioth. Druid was partially corrupted by Slorioth, and thus opted for a pointlessly risked strategy which ended up allowing Slorioth to manifest on Earth.

The mystic protectors called the Cognoscenti reacted to this breach. They summoned the 1970s Defenders from the time stream to fight Slorioth, Sepulcre and other Druid agents. Meanwhile Druid schemed to steal Slorioth’s power for himself.

Druid’s attempt failed and he was defeated by his own dark side. As to Sepulcre her shadow form was absorbed by Slorioth as he became able to fully manifest on Earth. Druid, now wholly corrupt and having joined Slorioth, destroyed her as he blamed her for his fall.

However, the resistance of the Secret Defenders and the Defenders had bought enough time for the Cognoscenti to summon the Living Tribunal. The Tribunal dealt with Slorioth.

After this victory, the Cognoscenti resurrected Woods in her Sepulcre form, as they couldn’t simply watch her die before them. The two Secret Defenders, Sepulcre and Cadaver, weakly promised they could be counted on in case of another dire emergency. They then left and parted ways.

Woods’ subsequent activities and sources of income are unrevealed. It is possible her difficulties holding a job continued but that she used financial and mystical resources taken from Druid to live comfortably. She seldom if ever used her costumed identity, but continued to be involved in occult pursuits. 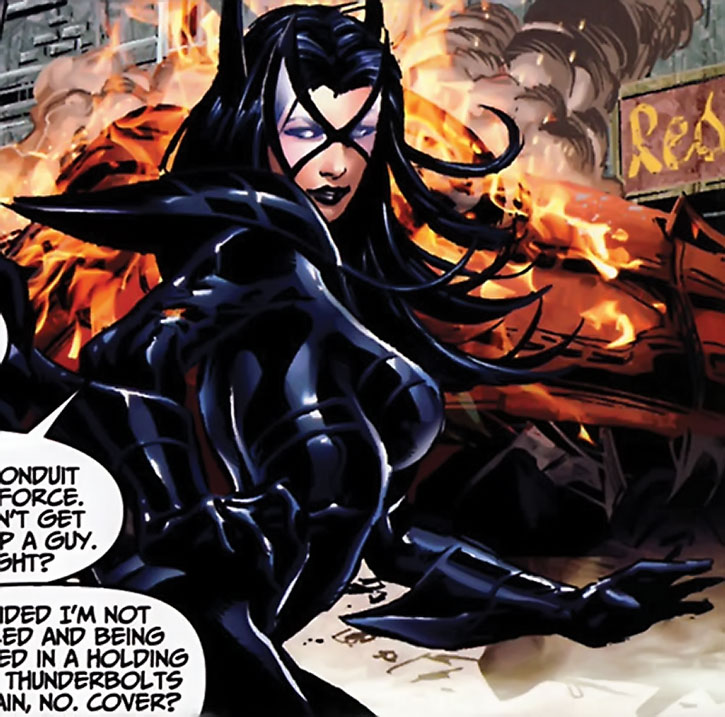 In 1996, she contacted private investigator Lindsay McCabe. Woods announce that she had located McCabe’s friend Jessica Drew, aka the original Spider-Woman, in another dimension.

Using spells and artefacts and enchanting Spider-Woman’s costume, Woods arranged for McCabe and the then-current Spider-Woman (Julia Carpenter) to rescue Drew from the dimension of the Void-Eater.

Woods’ motives and intents were not documented, but some bits of dialogue gave the tentative impression that she wanted to be the Dr. Druid-like organiser of a super-group.

The Superhuman Registration Act of 2006 was a problem for Woods. She felt uncomfortable with the direction her country was taking. She also didn’t think that she should register, as she hadn’t been active as a superhuman in years.

Roxxon Blackridge, the security contractor arm of Roxxon, identified her as a potential recruit. At this point, they were approaching superhumans likely to get in trouble with the registration laws. Jillian didn’t particularly want to work in security, and the phone call from Roxxon was on the sinister side. But she chose to keep her options open.

As fate would have it, on her way to the Roxxon interview Woods was caught in a superhuman fight. Thus, she breached the Registration Act.

Another unregistered superhuman, the redoubtable American Eagle, was also caught in the fray. Sepulcre and the Eagle worked well together. They helped the Steel Spider to put an end to the situation. Steel Spider lost an arm to Venom, but Sepulcre and Eagle fought their way out.

Having seen what happened to unregistered crime-fighters and now being a prominent one after fighting the Thunderbolts, Jillian rushed to the Roxxon office where the interview was to take place. She told them that she was taking whatever the job was as long as they got her out of the US ASAP.

Sepulcre apparently worked abroad for several years, but was back by 2010 after the fall of the Osborn regime.

Jillian mostly wears black. But she now wears mainstream clothing rather than the occult-themed garb she preferred as Druid’s companion.

During her initial hours as Sepulcre she was tough, aggressive and angry. But that was almost entirely a reaction to Druid’s betrayals and manipulations.

Jillian seems mostly concerned with building herself a normal life despite her curses. She continues to pick guys up in bars and to try to hold a job, without much success.

She no longer seems to be a super-heroine. Yet she wants to do the right thing and will certainly leap into action if she sees people in danger.

(Trying to pick American Eagle up) “I’m a permanent conduit to the Darkforce, and yet I can’t get a job or keep a guy. Busy tonight ?”

Bonuses and Limitations:
Thief is a Powered Skill, is Contingent on Dispersal, and only works on Mystical and Mystic-Linked restraints.

Advantages:
Insta-change, Misc.: Sepulcre is not considered to be a living being for most effects that specifically target those. It was also implied she has the Immortal Advantage.

Augmented vitality ● 20 points ● Descriptor: Shade nature
– Enhanced Strength 5, Enhanced Stamina 5, Enhanced Agility 1, Enhanced Fortitude 5.
– Immortality 10 (Limited 1 – doesn’t work if her link to the Darkforce is severed).
– Defensive Roll 2.
– Feature (can instantly change to her costume), Feature (Jillian is not considered a living being for those effects that only affect the living). 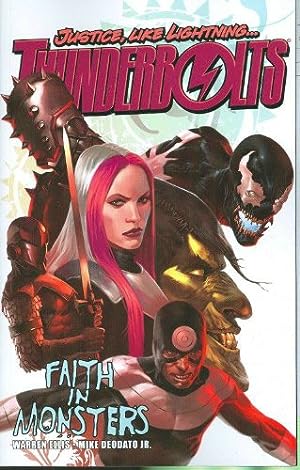 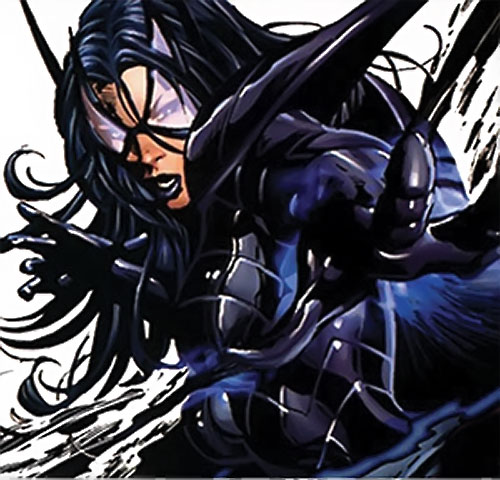 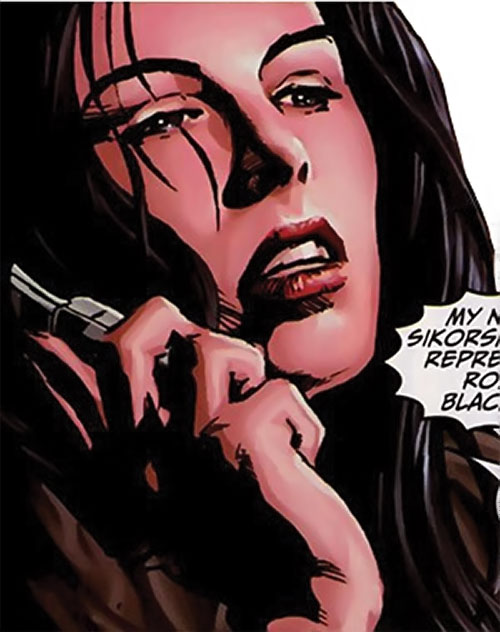 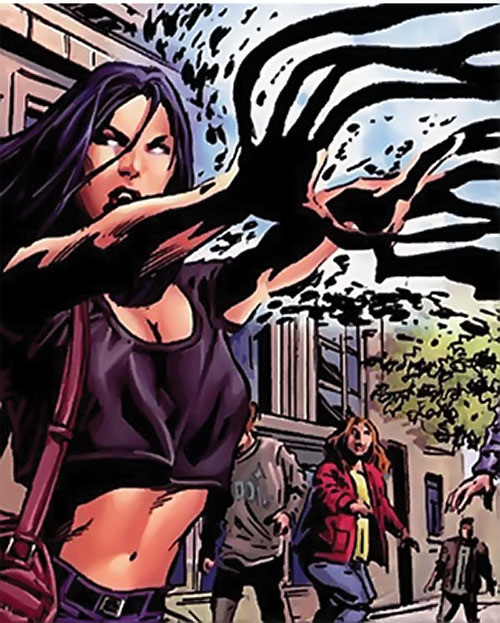 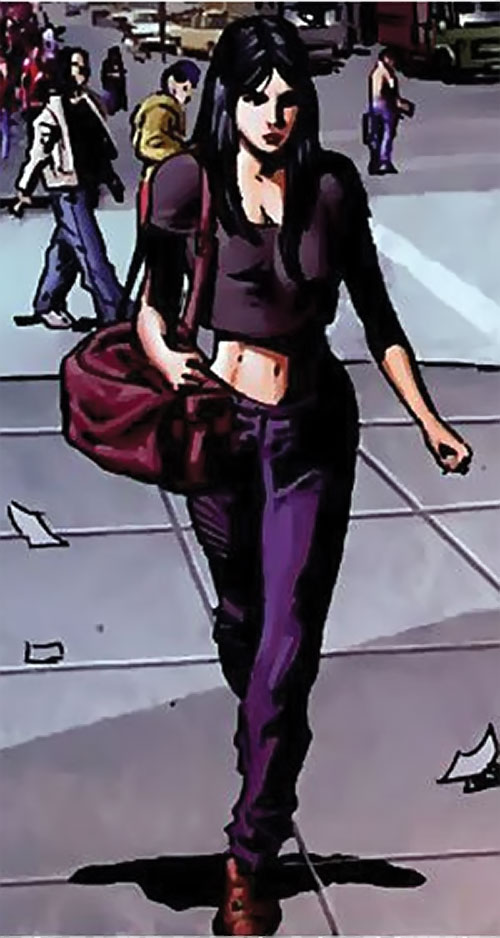