Fred has plenty of training with weapons, both in the army and the Watch. But he’s also had decades of experience in avoiding the need to use them by rapidly vacating the area.

He’s also a skilled archer, having allegedly won awards for it in his youth.

Fred joined the Watch young, rising to sergeant before joining the army. His military service, which included serving with the Duke of Eorle’s First Heavy Infantry — commonly known as the Pheasant Pluckers — saw him again gravitate towards his natural position of sergeant.

Returning home he rejoined the Watch. He has been happily ensconced in the role of sergeant ever since, taking full advantage of the little perks and gifts local business owners offer members of the Watch who loiter expectantly.

He’s been happily married for 30 years, by virtue of working different hours from his wife. They mainly communicate by writing notes. His three adult children — who also have children — can be put down to the persuasiveness of his note writing.

He took Nobby Nobbs under his wing, teaching him some things about policing which probably didn’t help how he’s turned out. The pair often patrol together, and while Colon frowns on Nobby’s more larcenous tendencies, they share an instinct for avoiding trouble.

Nobby and Colon were recruited by Lord Vetinari to escort him on a secret mission – since he valued their stupidity. They travelled in Leonard of Quirm’s submersible, covertly exploring underneath the risen island of Leshp.

They then travelled to the capital of Klatch, with whom Ankh-Morpork was at war. Vetinari put an end to it.

Returning to Ankh-Morpork, Fred soon found himself promoted to Head of Traffic for the Watch. A cushy gig for him and Nobby, the department would be self-financing as they fined anyone slow enough for them to catch. This unfortunately ensured his promotion to further posts when he got too free with the fines.

Fred suffered an unfortunate promotion when both Vimes and Carrot were out of the city. He was forced into being Captain Colon, which didn’t sit well with him or others.

The anxiety of command turned him into a monster, shouting commands at everyone and generally descending into a paranoid defensiveness. This resulted in a strike by the rest of the Watch.

He was relieved when Carrot returned to take control, and happy to return to being a sergeant.

By this point he’d been made custody officer. This allowed him to lounge about indoors as much as he liked, and have friends around for a drink.

Casually doing the rounds, a cigar Fred was gifted by a local importer proved to contain a goblin pot that he couldn’t let go of. His health degenerated. He had to be taken to a goblin settlement to have it removed.

He recovered slowly after it was taken away, but had troubling memories of having been a goblin.

Fred is every inch the image of a sergeant. Overweight and capable of outshouting just about anyone, he has a big red face and a tendency to sweat even in frosty weather.

He’s extremely awkward out of uniform, and will only be found in civilian clothes on special occasions or if ordered to.

Amiable and unimaginative, Fred is complacent and set in his ways. He doesn’t like excitement, especially if it involves the possibility of violence.

As long as civilians don’t look too dangerous he’ll maintain his aura of authority as he represents the Watch and inquires into people’s business. If forced into a fight he’ll fight dirty, putting his opponent down as quickly as possible.

While often pretending to know more than he does, he generally just confuses matters. Nobby’ll ask awkward questions at such times, appearing awed at Colon’s breadth of knowledge as he makes things up. Fred’s never quite worked out whether Nobby’s winding him up.

He’s a pleasant and efficient jailer, always willing to offer prisoners a coffee and a chat. Because this keeps him safely indoors, away from trouble. Despite his lazy intelligence, he’s always careful in this role, and never keeps the keys anywhere near where the prisoner can get at them.

He tends to be generally prejudiced against most non-humans, but it’s a lazy culturally-bred prejudice that he usually can’t be bothered maintaining after any time in contact with individuals.

“Me ? I don’t want to be captain ! I can’t do the thinking. It’s not worth all the thinking, just for another nine dollars a month.”

“Now, hwat we have ’ere is a puppet, mommet or heffigy, called by the hnickname of Harthur, weapons training, for the use hof. … What you must do now is take your truncheon like so, and on the command one, proceed smartly to Harthur and on the command two, tap him smartly upon the bonce. Hwun… two… Very good, only one thing wrong. Anyone tell me what it was ? From behind. You hit ’em from behind. No sense in risking trouble, is there ?”

“Me ? A hofficer ? I have my pride, Nobby. I’ve nothing against hofficering for them as is called to it, but it’s not for the likes of me.” 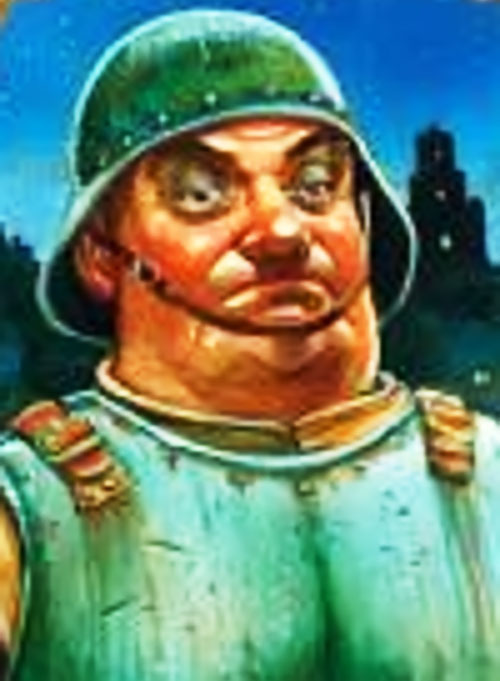