“Charlie” is an unusually powerful gorilla. He also possesses impressive reflexes and agility – especially for a 600 lbs. animal.

He’s highly adept at mimicking human behaviour, and is implied to be able to pick locks. He seems markedly more intelligent than even a smart real-world gorilla — which is plenty smart.

Charlie has been taught to mimic USMC drills for Donovan’s show. From there found it easy to actually use USMC training in combat, for instance to shoot a Thompson M1 .45 submachinegun. Though he didn’t know how to aim or reload.

He’s very much aware of how firearms and explosives work. Thus he reflexively avoids gunfire, grenades and the like.

“Charlie” was the pet gorilla whom Staff Sergeant Pinky Donovan acquired circa 1939, after two tours of duty with the US Marines Corps. An entertainer, Donovan set up a show with the clever ape.

When the second World War erupted, Donovan was too old to be drafted right away. But he participated to USO shows  to entertain troops in the Pacific. He created a new act with Charlie dressed as an heroic US Marine and himself dressed as a Japanese soldier. Donovan amazed soldiers with how his trained ape mimicked human behaviour and USMC combat drills.

The draft stepped up, and Donovan was required to re-up. This forced him to leave his faithful ape behind. However, the gorilla escaped and somehow sneaked aboard the troop transport carrying Sgt. Donovan toward battle. The ape was still wearing his mock USMC Sergeant uniform.

The C.O.  of the boat was livid. He busted Donovan down to Cpl., assuming that the presence of the gorilla was his fault. Donovan and his ape both ended in the brig.

When Donovan and the other Marines stormed a Japanese-held island, Charlie escaped from the brig after the main transport ship was hit. The gorilla armed himself and swiftly swam to the beach where Cpl. Donovan was.

Using a series of rolls to avoid gunfire, he took out the machinegun nest that was pinning the Marines. He then beat back nearby infantry. Though the Marines had a beachhead, the C.O. was furious, and busted Donovan down to private.

The gorilla nevertheless proved instrumental in taking the island with a minimal amount of casualties. He foiled Imperial Japanese ambushes and helped storm fortifications by surprise.

In the end even the C.O. accepted to rely on Charlie. He had the ape climb up a cliff to set up a rope for the Marines to climb and reach their objective. The gorilla then single-handedly took out the artillery piece that the Marines had come to destroy.

Mollified, the C.O. let the ape set up the American flag atop the newly-conquered fortification. The unit unofficially promoted Charlie to Sergeant — presumably Staff Sergeant since those were the insignia on his show uniform.

Charlie cannot talk, of course, of course – and seems trained not to make ape noises. This makes it difficult to ascertain his motivation. But it seemed that he wanted to become a real Marine (for instance he taught himself to salute), and to be there for his combat buddy and show-business partner Pinky when the bullets started flying.

Charlie is not interested anymore in typical ape food. He prefers human food such as chop suey or spaghetti. As befits a Marine he’ll even eat C-rations, though he tends to eat the food’s packaging too.

Charlie can formulate plans and come up with medium-term strategy. He’ll be sure to use his unique mobility (particularly climbing and brachiation ) to outmanoeuvre the enemy. Though he can use firearms, he prefers melee combat. In fact, he generally preferred not to kill.

There’s nothing that prevents this whimsical story from having taken place in the DC Universe. ”Charlie” could actually be a tourist from Gorilla City who decided to enlist and fight along with the USMC after a fashion, albeit while still pretending to be a normal gorilla.

Or at least while conserving a bit of plausible deniability.

Bonuses and Limitations:
Density Increase is Always On, Adds to STR, and Already Factored In.

Equipment:
Charlie wears an uniform, including a helmet. 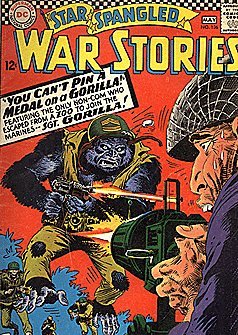 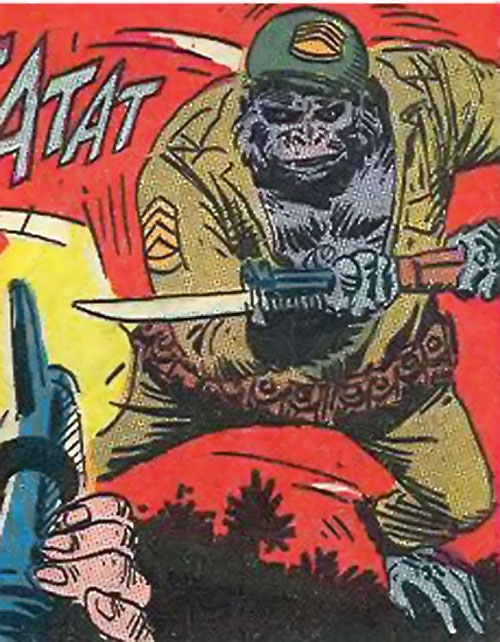 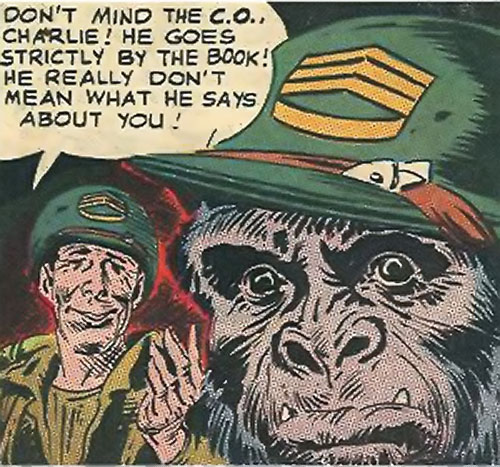