Fury was a 2001 mini-series written by Garth Ennis. It was a Marvel MAX imprint one, so it’s not set in the main Marvel Universe. But it was somewhat close, and a version of the characters in Fury could easily exist on Earth-616 .

It featured a team of three low-cinematic  S.H.I.E.L.D. soldiers (Steiner, Foss, Li) which would be useful in RPG campaigns that feature S.H.I.E.L.D. agents and/or military operations.

He takes pains to be as professional and reliable as he can, even in critical situations.

Sergeant Li and his brother (who both seem Chinese-American) both serve S.H.I.E.L.D.. But while one Li is a senior administrator (in the MAX series, he was pretty much head of S.H.I.E.L.D.), the other is one of the best soldiers in that agency. The soldierly one resents his brother, and never hesitates to berate him in private. Thus, the sergeant is probably the elder of the two.

Sgt. Li was chosen as the marksman in a patrol led by Nick Fury himself. The job was an attempt to prevent a major international incident. His skills were pivotal in the partial success of that mission, but he died when he ran smack into a monstrous Russian mercenary.

Li had previously managed to single-handedly interdict much of an airfield. He dropped anybody trying to approach the building Fury was in before being ordered to exfiltrate.

Like most everybody, Li wears his cap backward when using his rifle so it won’t interfere with the scope.

Sergeant Li loves being a soldier. He takes pride in his discipline – following orders with great resolve and loyalty.

He sees himself as representing S.H.I.E.L.D. in the field, even in the midst of combat. Sgt. Li is thus precise and polite, always projecting the image of a highly professional, ethical peacekeeping organisation doing its best to protect innocents.

He probably has the Geneva convention memorized, too.

(Receiving offers of sexual favors against safety) “That won’t be necessary, ladies. I’m an agent of S.H.I.E.L.D. and as such responsible for your protection.”

(As hostiles ready to assault their position)
Fury : “I need 20 minutes to get this done.”
Li (running interdiction from a sniper position) : “You’ll have it, sir.”

(Shouting to the opposing forces’ negotiators) “My commander has given me my orders, and I will not fail to carry them out. I will grant you safe passage back to your own lines, provided you go now. After that you must do as you see fit. However, for your men moving into position on the hangar roof, I can offer no such guarantees.” (opens fire) 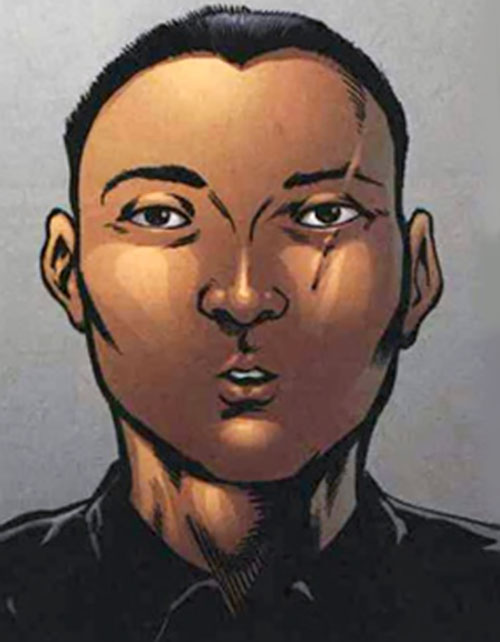