Slaughter appeared in G.I.Joe after a successful career as a professional wrestler, to shock the Joe team members out of their complacency.

(Sgt. Slaughter was one of the wrestling personas used by Robert Remus during the late 1970s and early 1980s. It was a drill-sergeant-like heel character. A few other real-world celebrities became G.I. Joe characters, including fellow wrestler “Rowdy” Roddy Piper — Ed.).

Sergeant Slaughter is a supreme athlete. He is among the strongest men on Earth, bordering on superhuman.

He once defeated six G.I.Joes at once in unarmed combat. Then a few dozen BATs once they were in hand-to-hand range.

Cobra Commander described him as having the constitution of a vending machine. Slaughter once used his thumbnail as a flathead screwdriver.

In ancient Greece, the locals mistook him for Heracles, and with good reason. 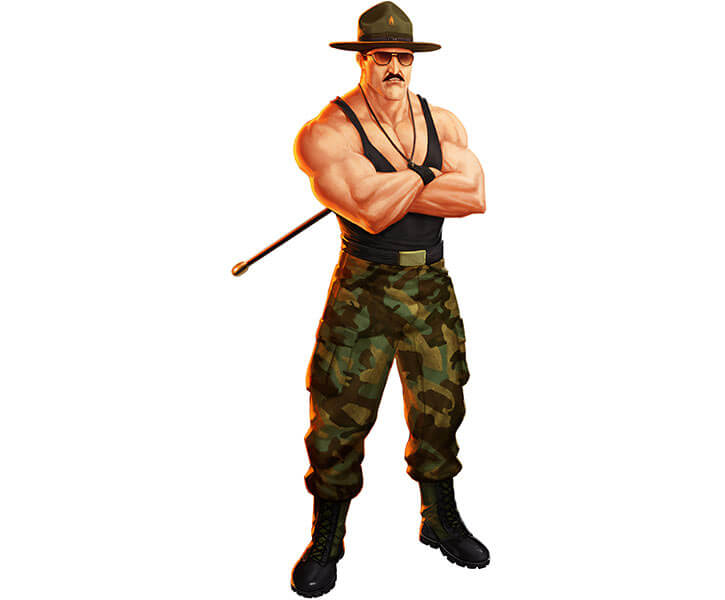 Art by Jarreau Wimberly  for Hasbro.

The man later known as Sergeant Slaughter joined the US Marines Corps in the early 1970s.

He served as a drill instructor at Parris Island  for some years.

In 1986, in response to an SOS from G.I.Joe Dialtone, Slaughter sped to Joe Headquarters. He came in in time to help them against the first deployment of Battle Android Troopers.

After the battle, General Hawk noted that his men were becoming careless and complacent. At his request, Slaughter began the task of whipping the Joes back into top shape.

His first mission after that was to infiltrate the Dreadnok audition. There, he learned that Cobra was planning to raid historic tombs worldwide.

When he destroyed the DNA extractor containing Sun Tsu’s DNA, Dr. Mindbender planned to replace it with that of Sergeant Slaughter. The Sergeant destroyed his own DNA sample, but was otherwise unable to prevent the creation of Serpentor.

Slaughter became a highly trusted member of G.I.Joe after that. He was fifth in command of the team and maintained fighting discipline within G.I.Joe.

Slaughter still did more than his share against Cobra, though. 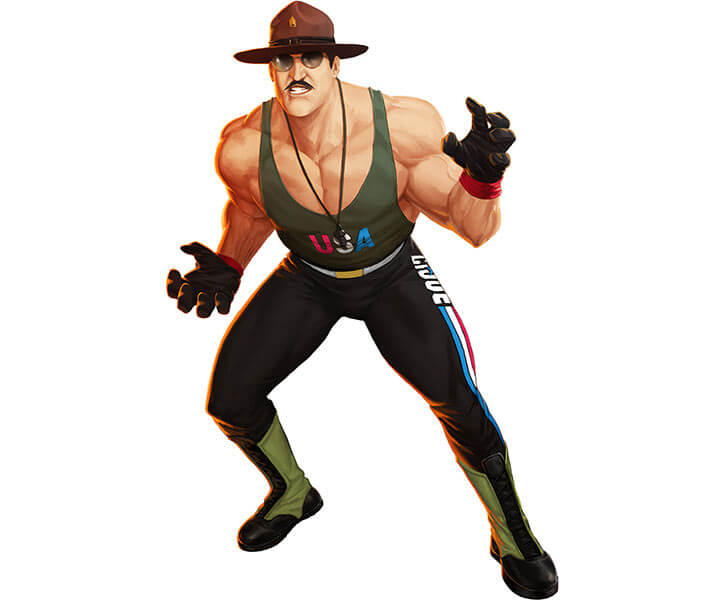 Art by Jarreau Wimberly for Hasbro.

Sergeant Slaughter is a tall bodybuilder with short black hair, and a thin moustache.

He wears a Smokey the Bear hat, a whistle on his neck, a black tank top, camouflage fatigues, and solid black boots.

Sergeant Slaughter is a nearly abusive military trainer, with little regard for trivialities.

He does have a sense of honor as strong as his body.

Slaughter: “Good morning, sleepyheads. I’m Sergeant Slaughter. I’m glad to see you got your lazy carcasses out of bed. Now you slobs have had it too soft ! You guys are supposed to keep our country safe from Cobra ! So startin’ today, we’re gonna fix all that ! Give your hearts to America, Joes, cause your butts belong to ME ! Now commence runnin’ ! Move it ! Heya, two, three, four…”
Hawk: “Good work, Sergeant. This is just what the Joes need to get motivated.”
Slaughter: “Happy to hear that, cause with all due respect, General Hawk, you’re a Joe, and you’re gonna join ’em !”
Hawk: “Yes, Sir !”

“The price of liberty is always eternal vigilance.”

“You’re going nowhere, space case. You’re here because you’re an industrial strength FOUL-UP ! My job is to whip you into shape, and I’m talking WHIP ! There’s only two ways out of my command: on your feet like a man, or in a ditty bag. An itty bitty ditty bag. Got it ?” 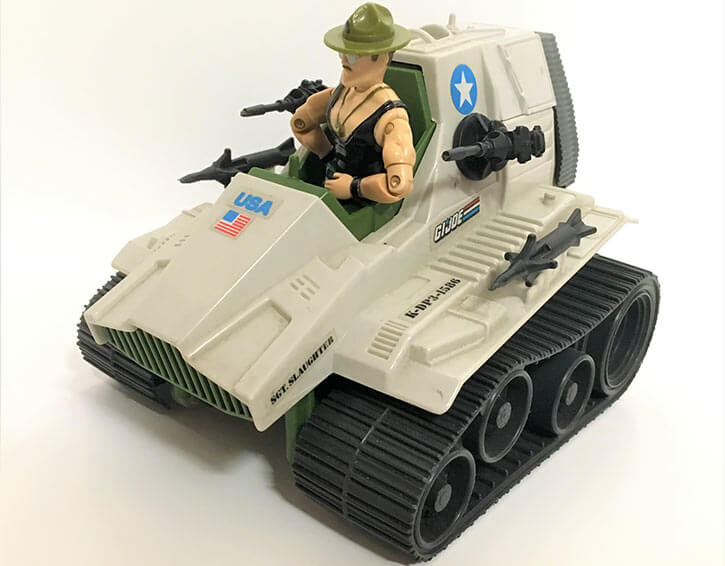