This obscure character appeared in 1951. Back then, the publisher that would become Marvel was chiefly publishing under the “Atlas Comics” brand.

She’s an horror character based on xenophobic clichés, as was the style of the day. But the material could easily be used as the base for something better.

It is strongly hinted that the Serpent can turn into a large, very poisonous snake. And that she has a rapport with serpents (and possibly other kinds of reptiles).

In 1951, a rare snake escaped from an American zoo (perhaps the Bronx zoo ). On the next day the head zoo-keeper was found dead from a snake bite.

The police, and eventually Marvel Boy, found the death suspicious. Of course the prime suspect ended up being a foreigner, a young Indian girl. She was a frequent visitor at the reptile house in the zoo.

Marvel Boy determined that she was a snake worshipper. He found her apartment to be full of snake cages and cases of snake eggs, along with Indian books about snake cults. That was proof enough !

Marvel Boy had the police announce that 1/ he was now in charge of the case and 2/ he intended to kill all snakes in the reptile house for public safety reasons. That very night, a snake sneaked into the head zookeeper’s house. But Marvel Boy was ready and stomped on it before it escaped.

And it would have worked, too…

He did not find the snake outside. But there was the young Indian girl, in great pain and holding the small of her back. She left, and Marvel Boy called the police.

All the police found was a dead rare serpent and an empty sari. Marvel Boy told them that he had discovered that the snake had been stolen from an Indian snake cult and brought to the zoo. But he couldn’t prove that the snake and the woman were the same entity.

(This adventure is typical of 1950s “shock ending” comic book short stories, save for the presence of a super-hero).

She also seems to have a French accent. Perhaps the latter indicates that she’s from Puducherry (புதுச்சேரி, formerly Pondicherry). Though of course this is more likely because imagined French accents were back then a shorthand to foreign accents in general.

“Vicious ? Oh, no, sir ! Zese lovely animals are sacred in my country ! And zey never attack people who are pure in spirit, and pure in body ! I zink zey… but I shouldn’t talk to strangers ! Ex-excuse me, please !”

She would presumably be a Kobra associate. Since serpents are traditionally immortal, it might even be the same person as in 1951.

The statuette that empowered obscure but sort-of-cool Batgirl foe Lady Viper could easily be related to the Serpent’s snake cult.

Note:
Switching forms provides no healing – wounds, damage, etc. are carried on from one shape to the other. 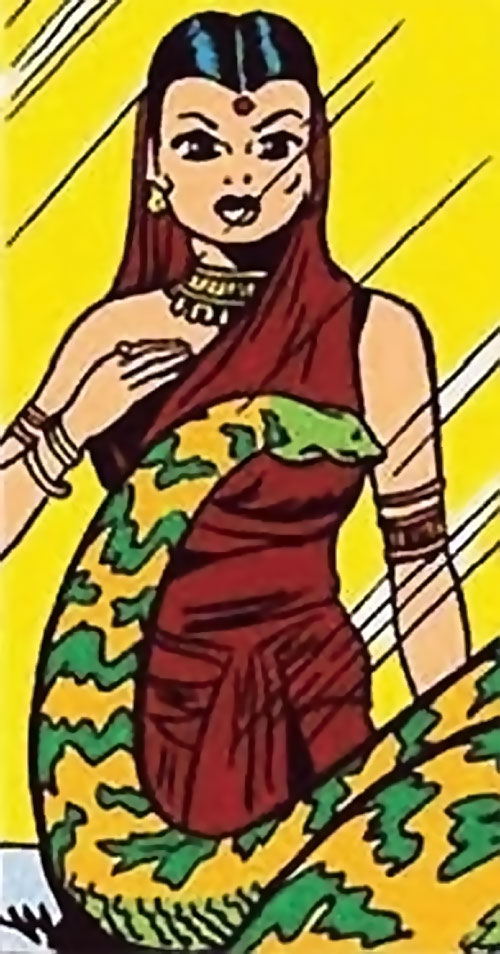 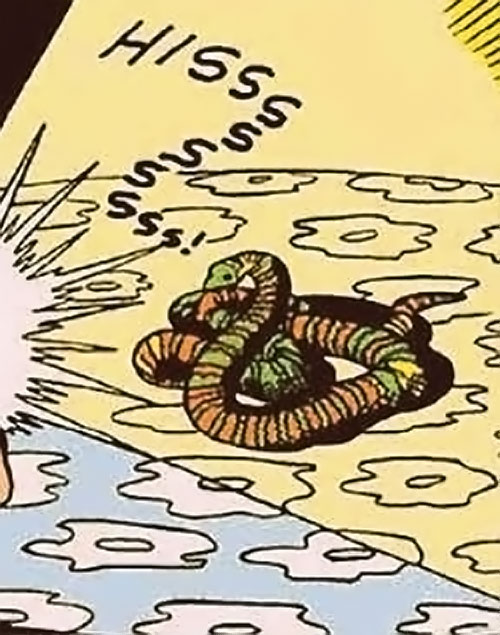