This briskly walks you through the various versions of the Serpent Squad, with a quick recap of what they did.

From there you can use this article as a home base to check the profiles for the individual members.

“Serpent Squad” is the name used by a loose series of villainous teams. Most members have identities patterned after serpentine-ish animals.

Most versions of the Squad have sported small rosters, and were assembled for relatively short spans.

Their most consistent enemy has been Captain America (Steve Rogers).

An alumni of the third Serpent Squad decided to scale the concept up. This is what became the Serpent Society.

The Society is distinct from the different Serpent Squads. It was also a far more structured enterprise with a much larger roster.

It was created in 1973 by three minor costumed criminals. They went after Captain America (Steve Rogers).

In practice, there was no leader. Whoever spoke last and the loudest usually decided upon their next move.

Cobra freed the other two from prison, to form a Serpent Squad under his command. Voorhees had previously worked with Mr. Hyde (Calvin Zabo), but now sought new partners.

Viper and Eel craved revenge against Cap and the Falcon (Sam Wilson). The original idea was to run a PR campaign to ruin Cap’s rep. But they just ended up attacking the heroes.

The first direct assault failed. But they could flee, and had badly burned Cap’s hands during the fight. The second ambush failed, the villainous trio was captured, and the Serpent Squad swiftly split. 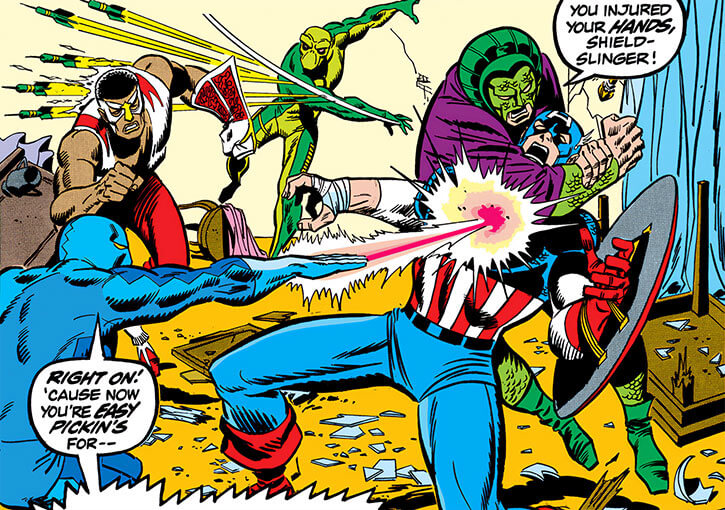 It was created in 1974 by the former Madame Hydra (Ophelia Sarkissian). It was run as a terrorist commando for Sarkissian to rebuild her power base.

In 1974, Madame Hydra returned from being banished in LimboA kind of dimension where time doesn’t pass. Hydra had been destroyed, so she hid and worked on building up a new force.

She liked the idea of a Serpent Squad. She thus recruited Princess Python as her first operative. Python stormed a prison to free Cobra and Eel. Meanwhile, Madame Hydra secretly murdered the Viper to claim his identity. She said that he had been killed by the cops.

The newly-minted Viper also struck an alliance with renegade Atlantean warlord Krang. Krang had just found an evil mystical artefact, the Serpent Crown, and the Viper knew what to do with it. She and her Squad kidnapped Hugh Jones, the CEO of the Roxxon Oil giant corporation.

Under the Crown’s control, Jones used Roxxon equipment to start raising sunken Lemuria. But Nomad (Steve Rogers) intervened, defeating the Squad. Viper and Cobra managed to flee with the Crown.

Rogers caught up with the pair as they were having a major shootout with the Seattle police. The Viper ended up shooting the terrified Cobra as he tried to flee, and the Crown was seemingly lost in a sewer. 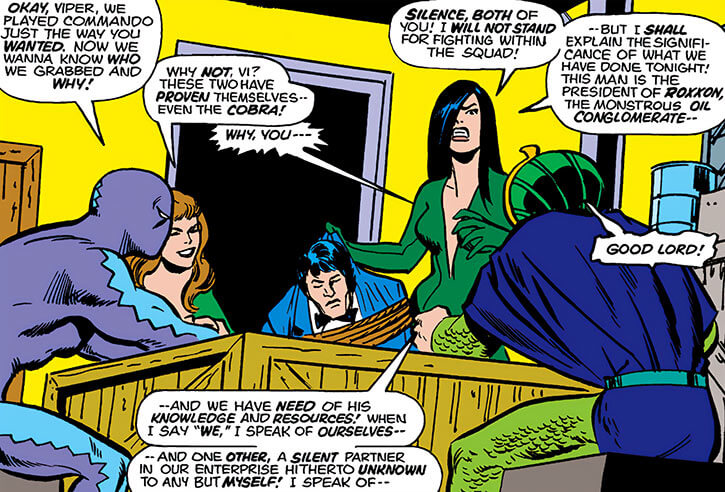 Hugh Jones remained under the Crown’s control. He had Roxxon launch a years-long project to increase the Crown’s power. A key part was bringing in the Crown of a parallel Earth to Earth-616The main Marvel Comics version of Earth.

The Crown also had Roxxon turn mercenaries into serpent-themed supervillains. These were eventually deployed as the third Serpent Squad. At least one subject, Bushmaster (Quincy McIver) was still being enhanced and couldn’t join in time.

The Squad recovered the second Crown from the Pacific Ocean’s floor. They then clashed with the Thing (Benjamin J. Grimm), Stingray (Walter Newell) and Triton of Attilan. The Squad gave a solid account of themselves, but were defeated.

However, Sidewinder teleported away and delivered the Crown to Mr. Jones.

Anaconda, Black Mamba and Death Adder carried on as a mercenary team. But in 1982, they underperformed against Iron Man (Tony Stark) and were arrested.

However, Sidewinder soon made them a generous offer. And thus was the Serpent Society born. 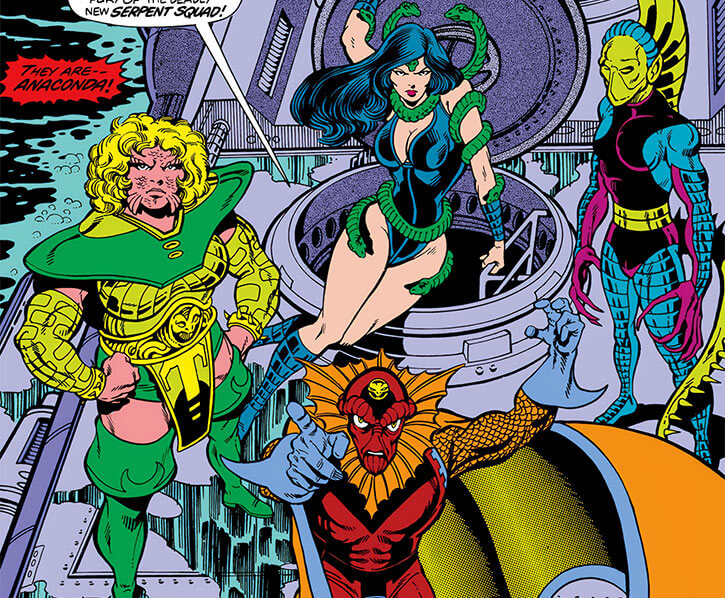 Supervillain team doing forceful, direct heists. These appeared in 1988. They didn’t call themselves the Serpent Squad – the press did.

This team robbed casinos in Las Vegas. They did a good job of it, their professionalism compensating for their low-powered abilities.

Sidewinder soon invited these new-fang(l)ed snake-themed criminals to join the Serpent Society. This was the plan all along. The new guys were all infiltrators paid by the Viper (Ophelia Sarkissian).

The Serpents decided to pull the scales over their differences. The fourth Serpent Squad’s members thus continued to work with the Society. 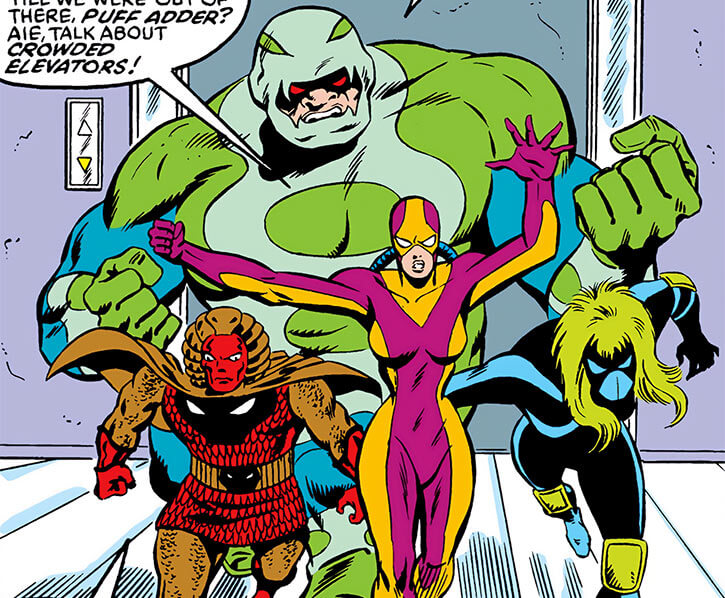 A terrorist hit squad, first seen in 2007. They worked for the Red Skull (Johann Shmidt/Aleksander Lukin).

This was a new version of the original, assembled by the Red Skull to back his daughter up. It had both the Eel and the Cobra’s longtime successors, plus a new Viper. The later was recruited and equipped to revive that identity.

This commando conducted terror strikes. Psychological sabotage of S.H.I.E.L.D. by Dr. Faustus then allowed them to free Crossbones (Brock Rumlow).

However, during a raid into the White House, they ran into Captain America (James “Bucky” Barnes). The Squad was defeated, though Cobra could evacuate the wounded Sin.

In 2012, the Squad re-formed minus Shmidt, under Voorhees’ leadership. Their clients were Baron Helmut Zemo, and Queen Hydra.

They were issued madbombs to start large riots through New York City. They also seized the opportunity to rob a bank, but were stopped by Captain America (Steve Rogers) and Sharon Carter. 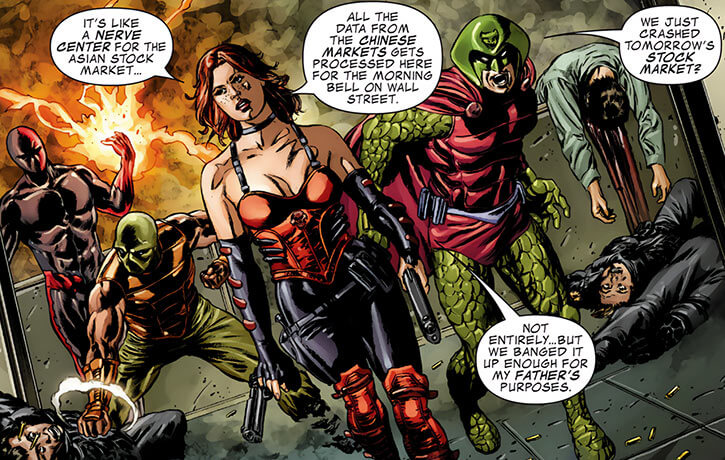