Maybe he just looks cool where you’re a little kid.

For much context, we suggest that you first read our species profile for The People.

Serpentyne is one of the powerful Warrior-Primes of the People, with superhuman strength and durability.

Despite their bulk, Warrior-Prime are remarkably quiet and rely in part on stealth tactics. Serpentyne is no exception. He chiefly acts as an assassin in his war against the Dire Wraiths.

The Stalker In The Night could unerringly smell Dire Wraiths, even when they were morphed into a human, animal or monstrous form. This might have been a unique ability.

During the extermination of the People by the Dire Wraiths, Serpentyne was one of the warriors who rallied and made a stand. But rather than fight these, the Wraiths sent in a Deathwing.

Serpentyne was caught in a cave-in. While he survived, he lost an eye and was cut off from the rest. 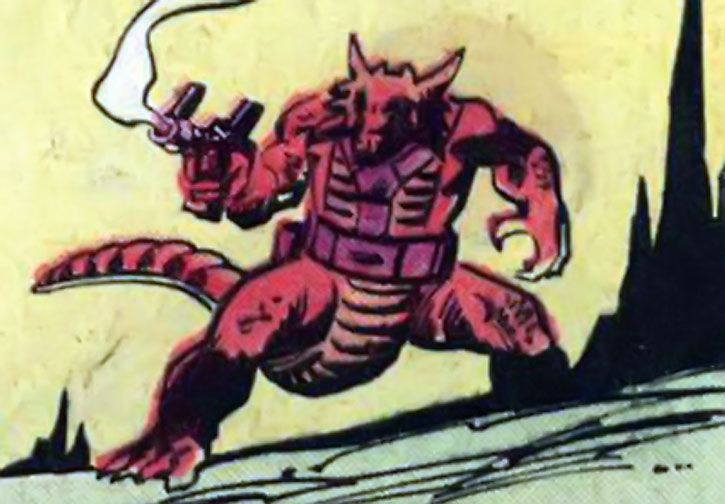 Serpentyne thought that his entire race had been exterminated. Yet, the warriors’ stand had actually allowed a number of refugees to flee.

Devastated by the genocide, Serpentyne became an avenger stalking and murdering Dire Wraiths. Since he operated from underground caverns and was remarkably stealthy, Dire Wraiths couldn’t stop him. They came to dread the “stalker in the night”.

Over the years Serpentyne moved to caves in West Virginia. He relocated under the town of Clairton, where many Wraiths were active.

In 1980 the spaceknight Rom stumbled upon’s Serpentyne’s subterranean hideout during a fight with the Clairton Dire Wraiths.

Rom mentioned that he had a super-weapon against the Wraiths (his Neutraliser, which had recently been captured by the enemy). The psychologically damaged Serpentyne decided that he had to have it to kill more Wraiths.

The situation escalated into a fight to the death. Serpentyne was accidentally killed as he attempted to run Rom through with a stalagmite.

Though he was a powerful fighter and a dreaded killer, Serpentyne had been psychologically unravelling for years. He had been traumatised by the genocide. And he had every reason to believe that he was now the last of his kind, forever alone and without any future.

Once he learned of Rom’s Neutraliser he went completely manic at the thought of having and using such a weapon. Given how irrational his reaction was and his state of despair, his attacking Rom felt like a suicide as Serpentyne couldn’t bear to live alone.

“My hatred for the Wraiths surpasses anything you might feel !”

“Give me your Neutraliser, spaceknight ! Vengeance will be mine !”

Advantages:
Headquarters (Confined – he has lots of real estate but little to put in it), Familiarity (Subterranean survival), Misc.: For the purpose of lifting and throwing objects, Serpentyne’s STR is considered to be 3 APs higher.

This writeup assumes that Serpentyne had the capabilities demonstrated by other Warrior-Primes of the People. 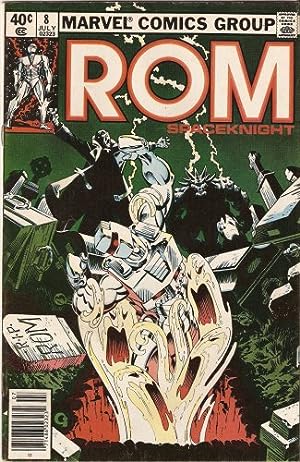 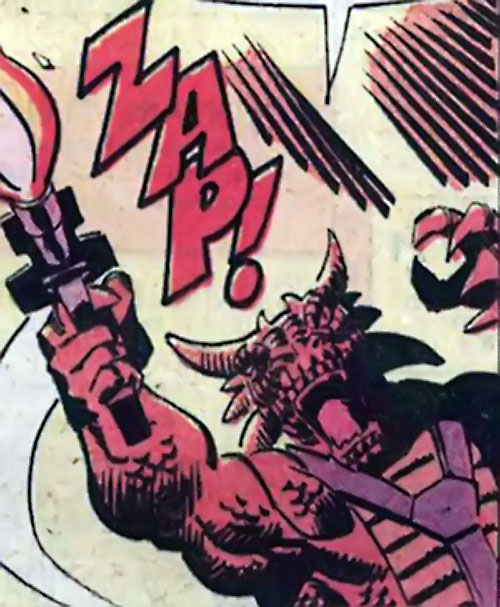