The Great Ten appeared in 2006, during the 52  event. There were attempts to further develop them, but commercially the series crashed and burned.

Furthermore, he can split into seven separate selves. Each of these is skilled in a particular martial art.

Said to have received his abilities from a strange old man he saved from a beating, the Seven Deadly Brothers known to the public is a cover. His story really begins over 300 years ago.

Born to poverty in Fujian province, Kei-Ying joined the army for steady meals. It was as such that he took part in the destruction of Shaolin Temple  in 1723. The defence by the Grandmasters therein made an impression on him, despite their failure.

He was part of the troop which accompanied the turncoat Grandmaster Bak Mei when he went after the other Grandmasters on the Emperor’s behalf. Amazed watching him in battle, Kei-Ying told Bak Mei he wished to also become a Grandmaster, but was laughed off.

Running away, he searched for a wushu  school he had heard of. It was in the mountains near Song Shan , and had been founded by seven Taoist sorcerers. 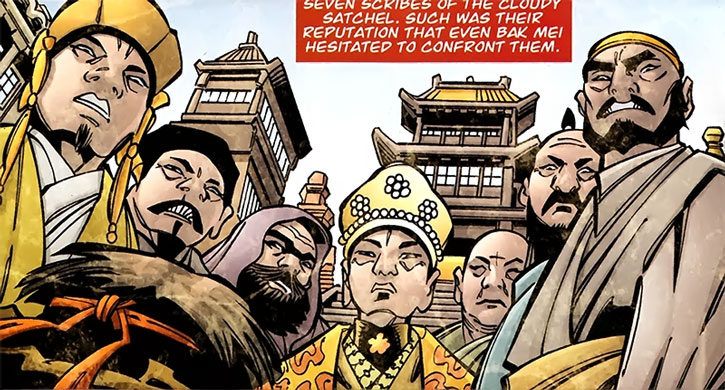 Reaching the school, he begged their forgiveness for his sins. He also asked them to train him, and use him as a weapon. Their judgement was merciless, demolishing his excuses, and forcing him to accept his responsibility for his actions. They then cursed him by giving him what he sought.

Returned to Beijing with little memory of what had passed, he confronted and beat Bak Mei.

It’s unknown how he passed the centuries since them. But there’s likely to have been a bit of fighting involved.

His head contains seven distinct personalities. No two of these seem able to agree on anything other than their love of fighting, which they undertake ruthlessly. The Seven Deadly Brothers rarely seem focussed on anything else, appearing indifferent to most things. And indeed they are.

Fighting is the only thing to give him any real peace, the thing they all love. They can become so overwhelmed by the fight that they can forget the reason for it, and the goals of their mission.

While some of his individual members may be friendly with other members of the Ten, his overall confusion of opinions keeps Kei-Ying from socializing much. This leaves him pretty much an outsider.

He also has little interest in the politics of the group, as long as they provide enough opportunities for him to engage in violence.

(All but the third quote are from his narration of the story. Other than that he doesn’t get much to say.)

“I didn’t much bother with the details… something about phoney Gods and Taiwanese gangsters. All I cared about was that the biggest gang fight in Hong Kong history was about to unfold, and all seven of me weren’t about to miss out.” 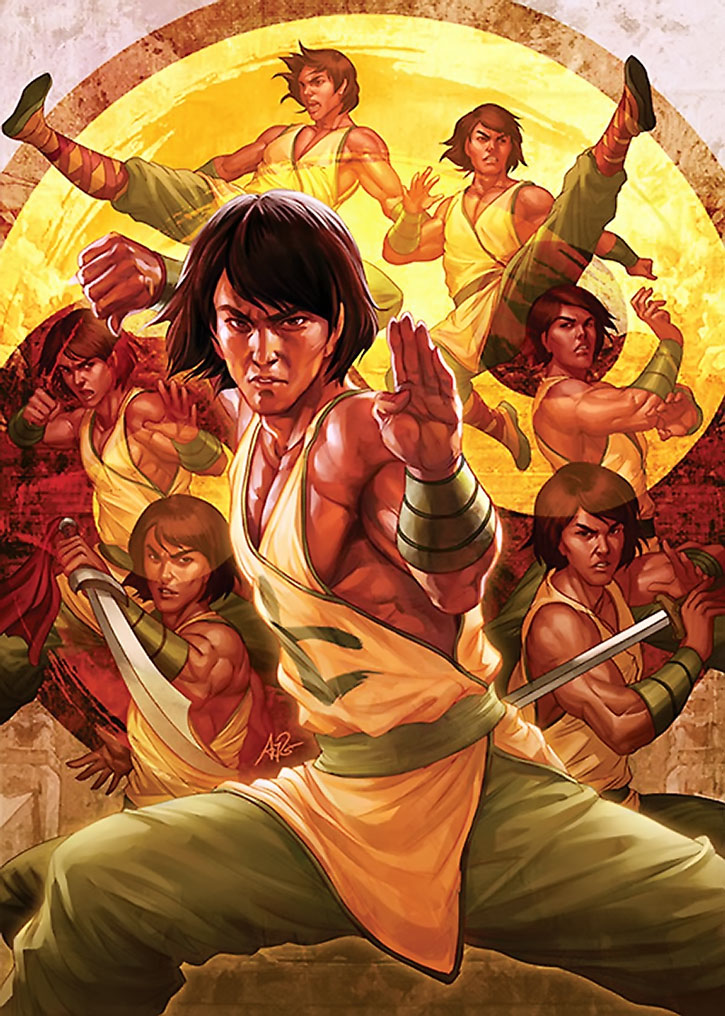 “I am never of one mind about anything. Pulled in seven directions, I can’t decide what to have for lunch some days, much less settle on a home, career or girlfriend. The only thing my seven selves agree on is a love of violence.”

“I have stopped your hearts. The first to tell me who I’m looking for gets his pump restarted. The second goes to the grave.”

“The Taoist immortals had imbued me with seven lifetimes’ worth of martial arts skill, and not a clue how to control it. Seven different plans of attack competed inside my head. And then, I slid apart like a deck of cards. The crowd in my head went their separate ways.”

The flow of events in the hotel battle during the mini-series, in particular all the Brothers seeming to know what their target looks like after one of them being shown his picture, seems to indicate they share a consciousness to some degree while separated. So I’ve used the Bonus from the revised version of Split (available in the New Rules File articles). 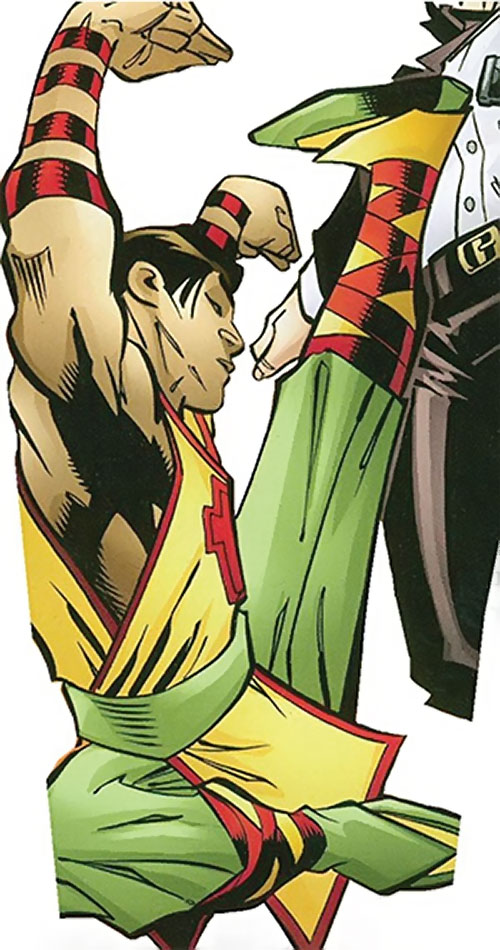 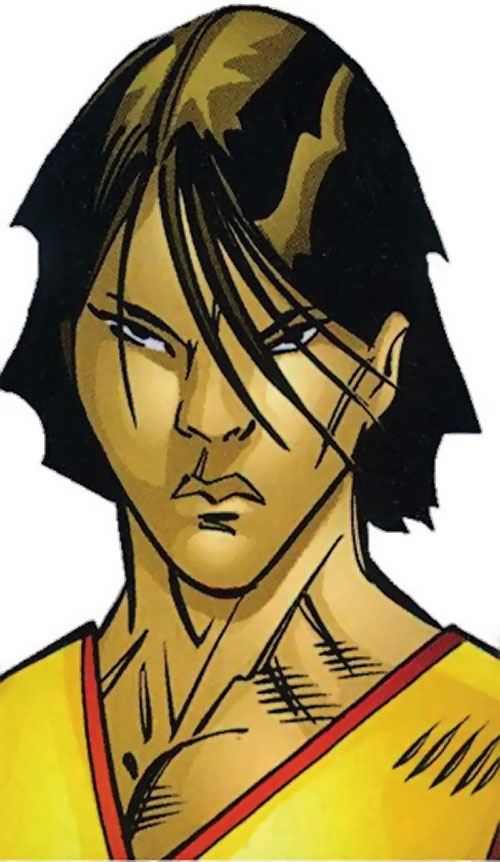 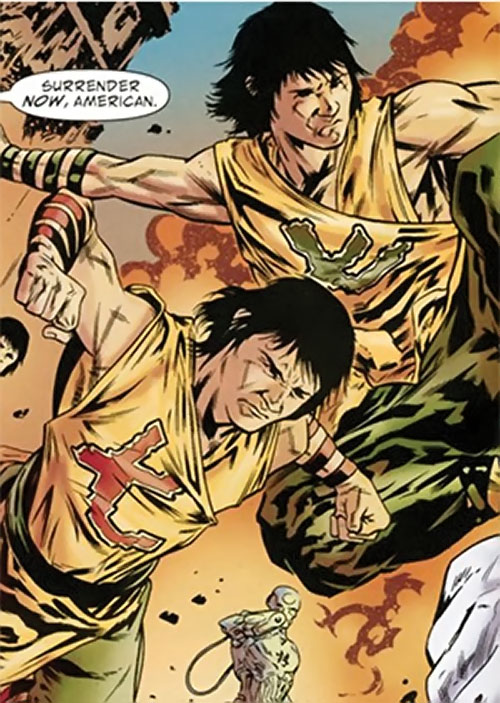