The Sex Men are trained soldiers and enforcers. They are used to coping with various paranormal sexual situations. They also carry advanced equipment.

They are superhuman. For instance, if a Sex Man is beheaded, his head will remain fully aware and even able to talk. It can presumably be reattached later.

The Sex Men are one of the Pentagon’s paranormal units. They are teleported in small units (generally three men) to contain and clean sites where paranormal sexual phenomenon took place. Apparently, this is not an uncommon phenomenon.

A triad of Sex Men (Captain Kiss, Lieutenant Cuddle and Lieutenant Torture) intervened in Happy Harbor when the arrival of the Shadowy Mister Evans triggered massive lust energy in that town. There, they allied with the Doom Patrol. 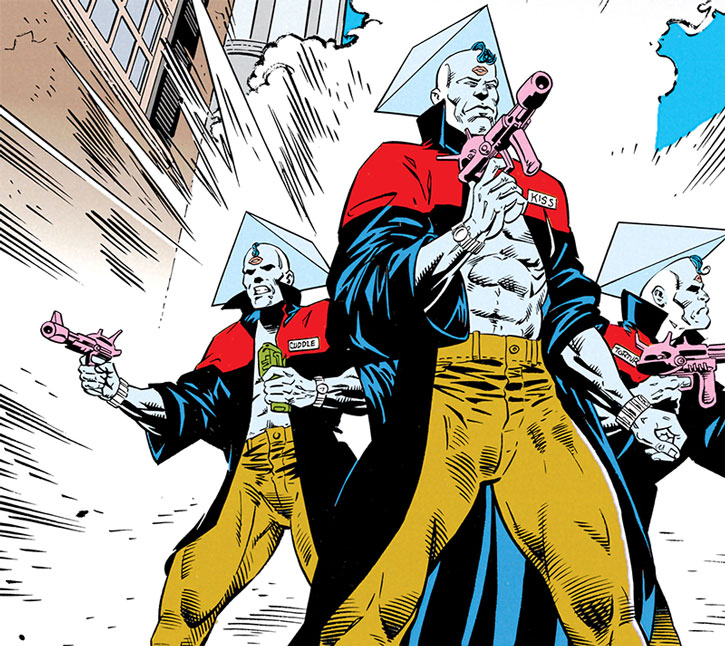 Cliff “Robotman II” Steele managed to exorcise the Shadowy Mister Evans. Then Crazy Jane (in her Scarlet Harlot persona) gleefully absorbed all of the excess sexual energy rampaging around.

With the situation back to normal, the Sex Men teleported out. Semper fi !

The Sex Men act every bit like tough cops with a strong military streak. Classic action bits will include “Let’s clean this town up” or “Reach fer the sky or die !”.

“We moved in on the clickering, clattering pyramid accumulators, protected from possible deadly orgone radiation. The needles on the libodimeters went crazy, peaking off the scale and finally shutting down with groans of exhaustion. Our instructions were simple : ice the sex fiends and pull out with minimum collateral damage. All in all, a day’s work for the men with blue nipples and a song for every occasion.” 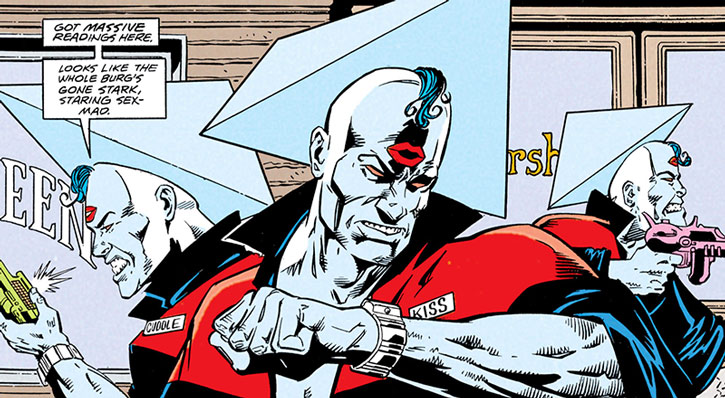 Bonuses and Limitations:
Orgone sense is just like magic sense but for orgone (duh).